After a one year hiatus it’s that time of year again; the Ballon d’Or shortlist has been revealed and all that’s left is to wait and see who is crowned the best footballer on the planet for 2021.

Close your eyes and picture Lionel Messi in 2021. Where is he? That’s right, he’s in the right half-space, dribbling inside, and you already know what’s coming next. His first ever goal for Paris Saint-Germain came from that exact position, after all. Messi no longer plays up front very often. Indeed, Barcelona were no longer set up well enough to create top quality chances for him in his final months at the club.

Instead, Messi has grown accustomed to, well, sort of just figuring it out himself. And nothing captures his favoured move nowadays than a game against Alavés last season.

For Messi’s first goal of the game, he glides in from the right menacingly, attracting more than one defender and taking more touches as he approaches them. 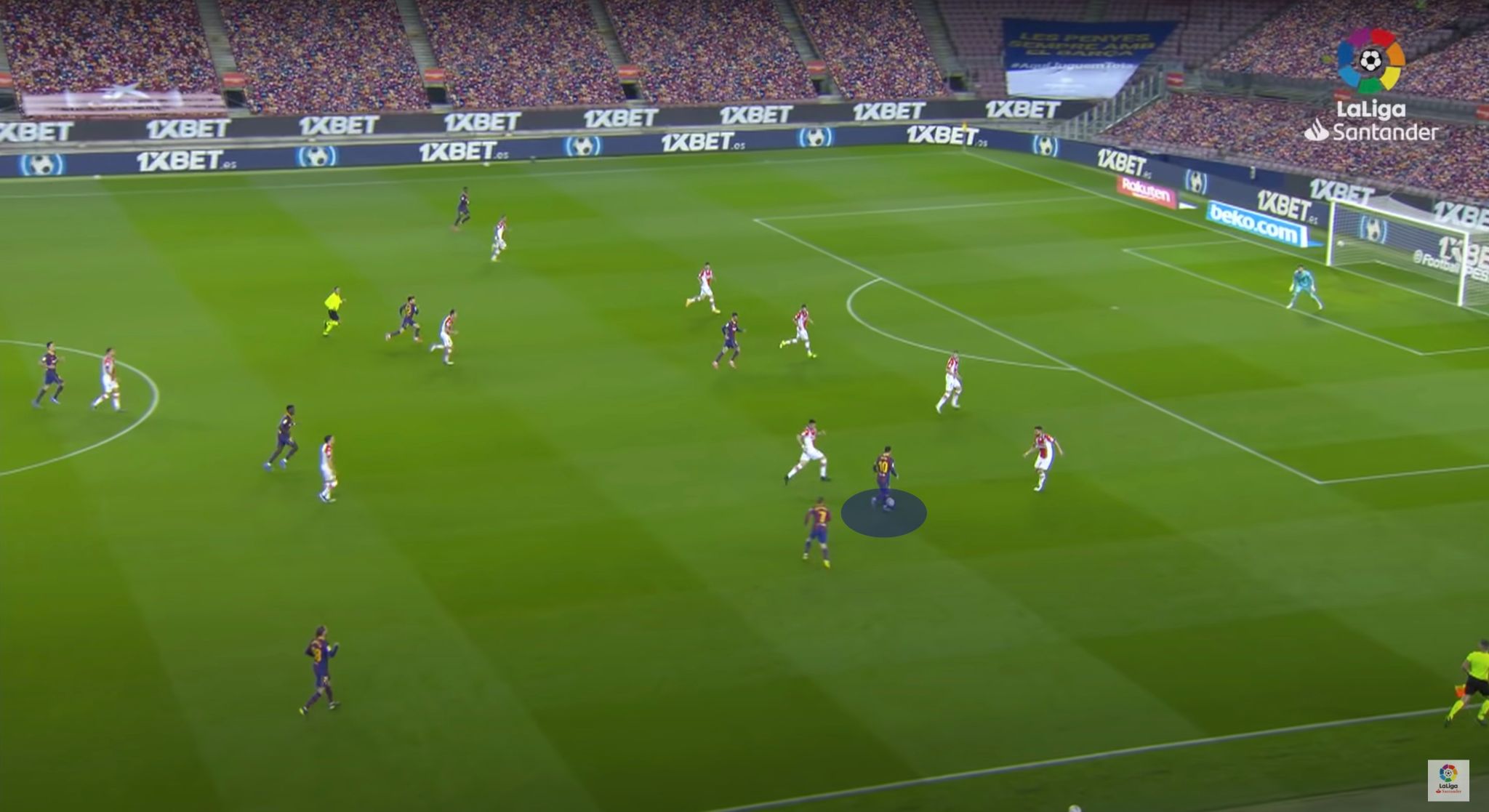 That is the first key detail. The more touches Messi takes, the more chances he has to preempt which touch will be the crucial one, the one where he flicks the ball inside and darts away. The defenders know what’s coming, of course they do, but not when. Messi keeps them guessing. 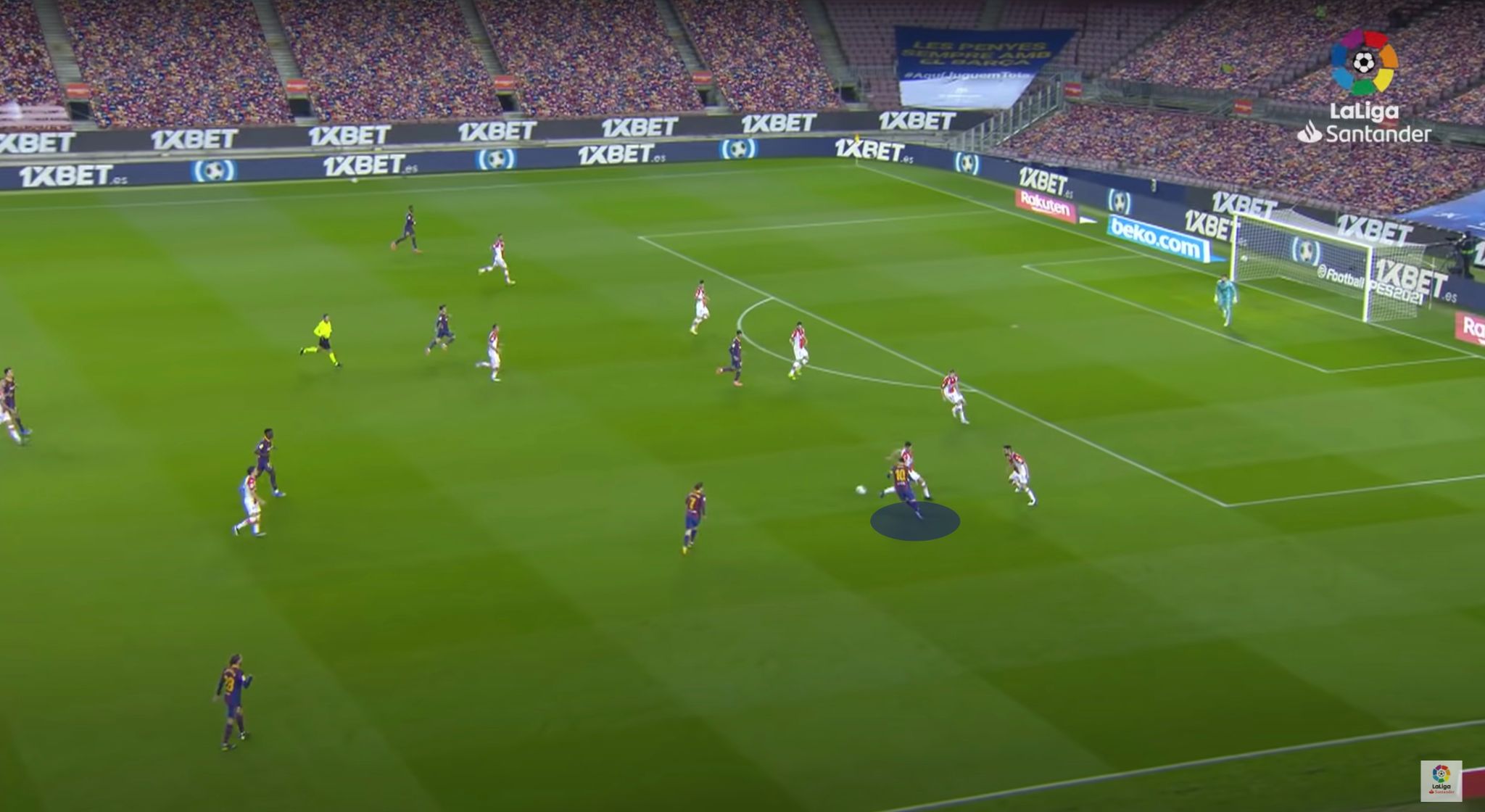 Even then, when he’s in a shooting position, things aren’t as predictable as you’d think. Messi sometimes shoots early. Sometimes he drifts further across goal, into a more central space before shooting. Sometimes he goes to the near post, and sometimes the far post. There is no second-guessing him. For this one, he pulls the trigger for the near post as soon as the goalkeeper steps across his goal, anticipating a strike towards the other corner. 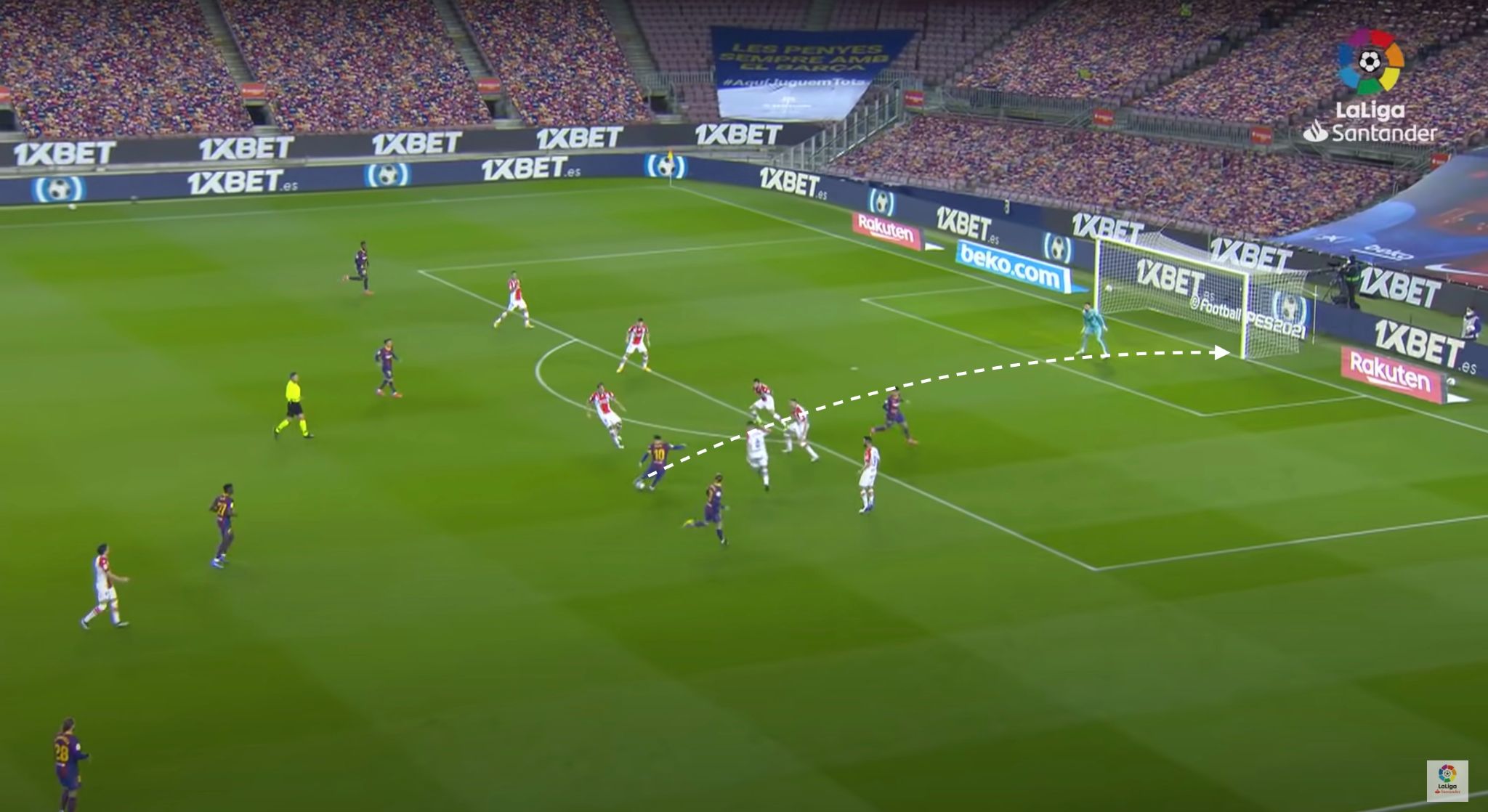 His second goal sees him do almost the same thing until the shot itself. Instead of the bottom near corner, he finds the far top corner. 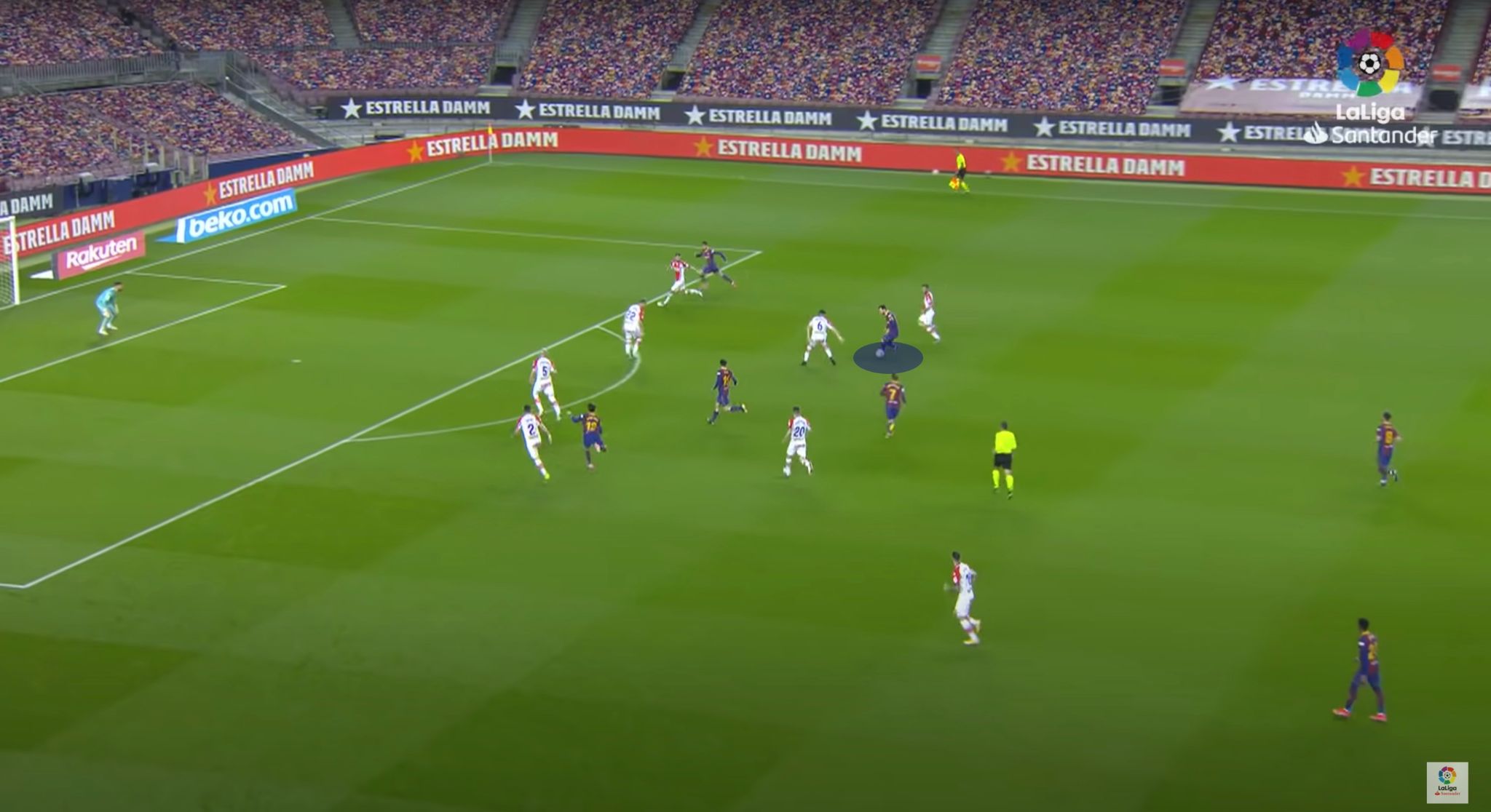 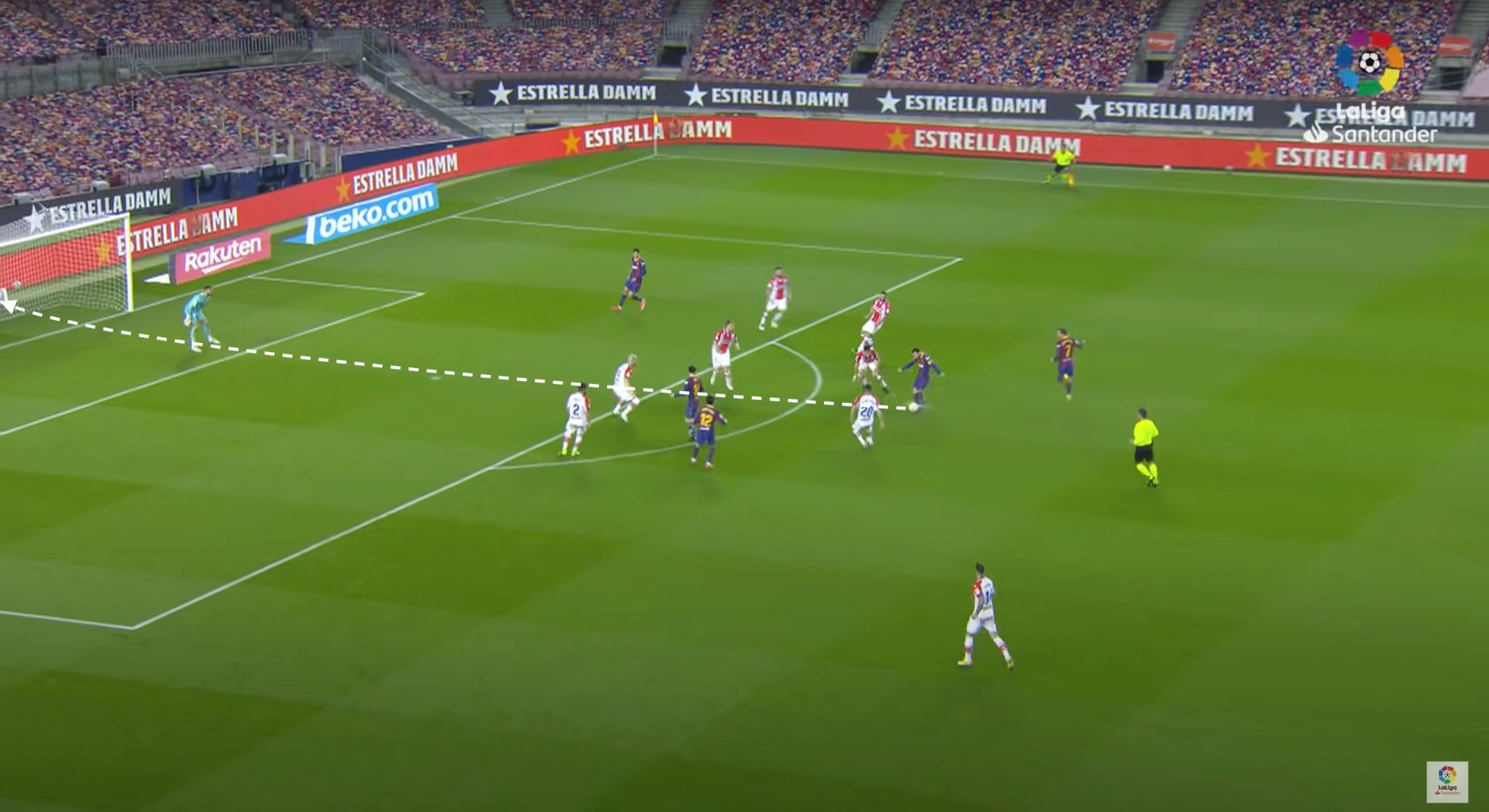 Messi has always had this ability but he has honed it and relied on it more and more. The Argentine has scored a goal from outside the box every 5.2 games in 2021, more frequently than at any other time in his career. He’s only scored more than his tally of nine from outside the area so far in the calendar year once, when he scored 10 in 2010. There’s no doubt this is the signature move of the 2021 iteration of la Pulga.

For all the dribbling that the early Ronaldo was associated with, he has since become the most prolific penalty-area forward of his generation. The Portuguese star’s game is now almost entirely predicated on his movement in the area, his superb athleticism, and his hunger to score.

Ronaldo likes to be at the far post when the ball goes wide, with as many opposition defenders in view as possible. That removes their ability to read what he’s doing and forcing them to react to his movements. The positioning is incredibly helpful when combined with his incredible leap. No player in the history of the game has a reputation for catching air like Ronaldo. He’s able to rise high, in complete control, and stay there for an incredible amount of time. That was the source of a goal against Parma for Juventus last season. 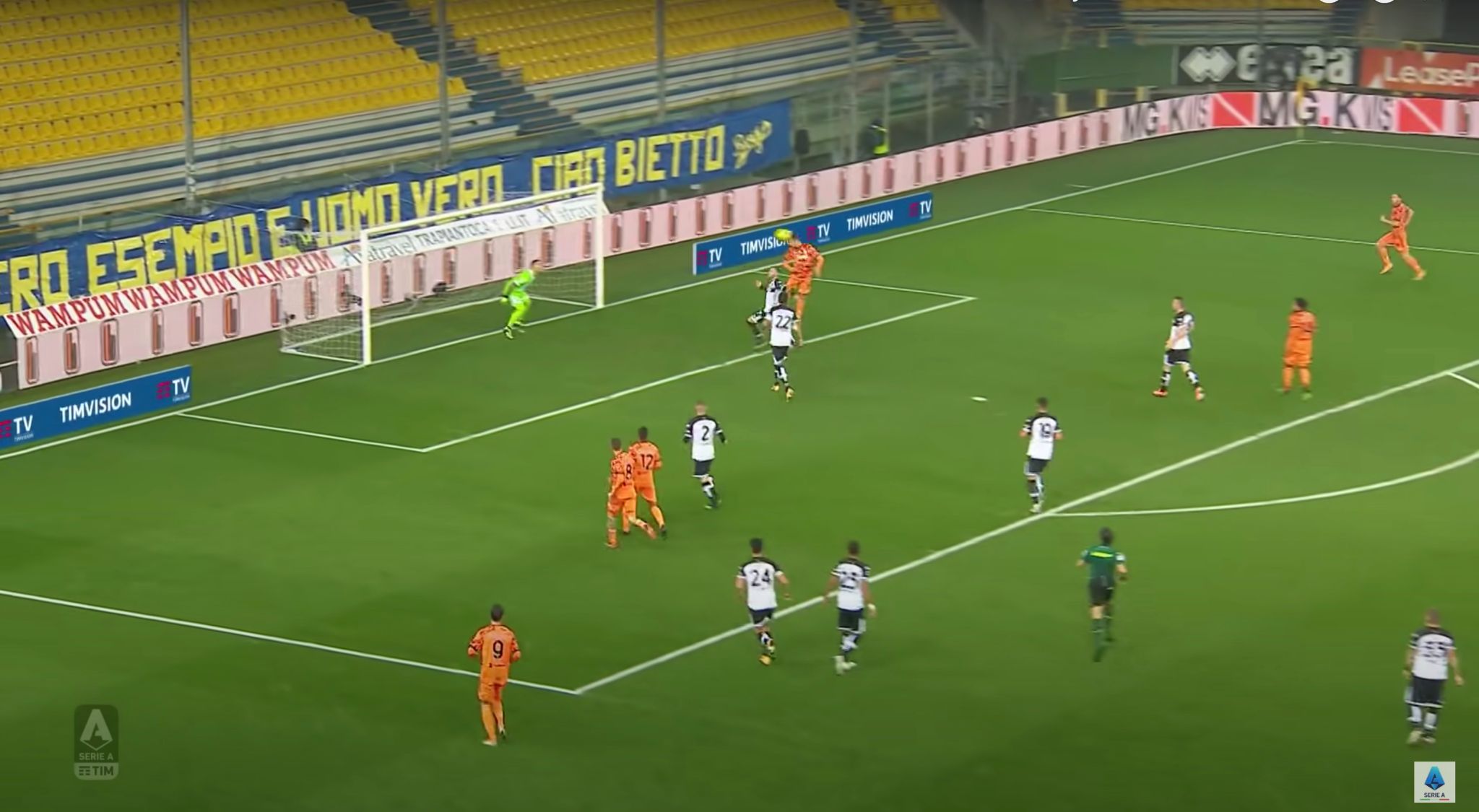 But another goal in the same game — one scored by Dejan Kulusevski — best shows how Ronaldo is always switched on. He is in his favoured position, outside the centre-backs but inside a fullback as a cross looks like it is about to arrive. 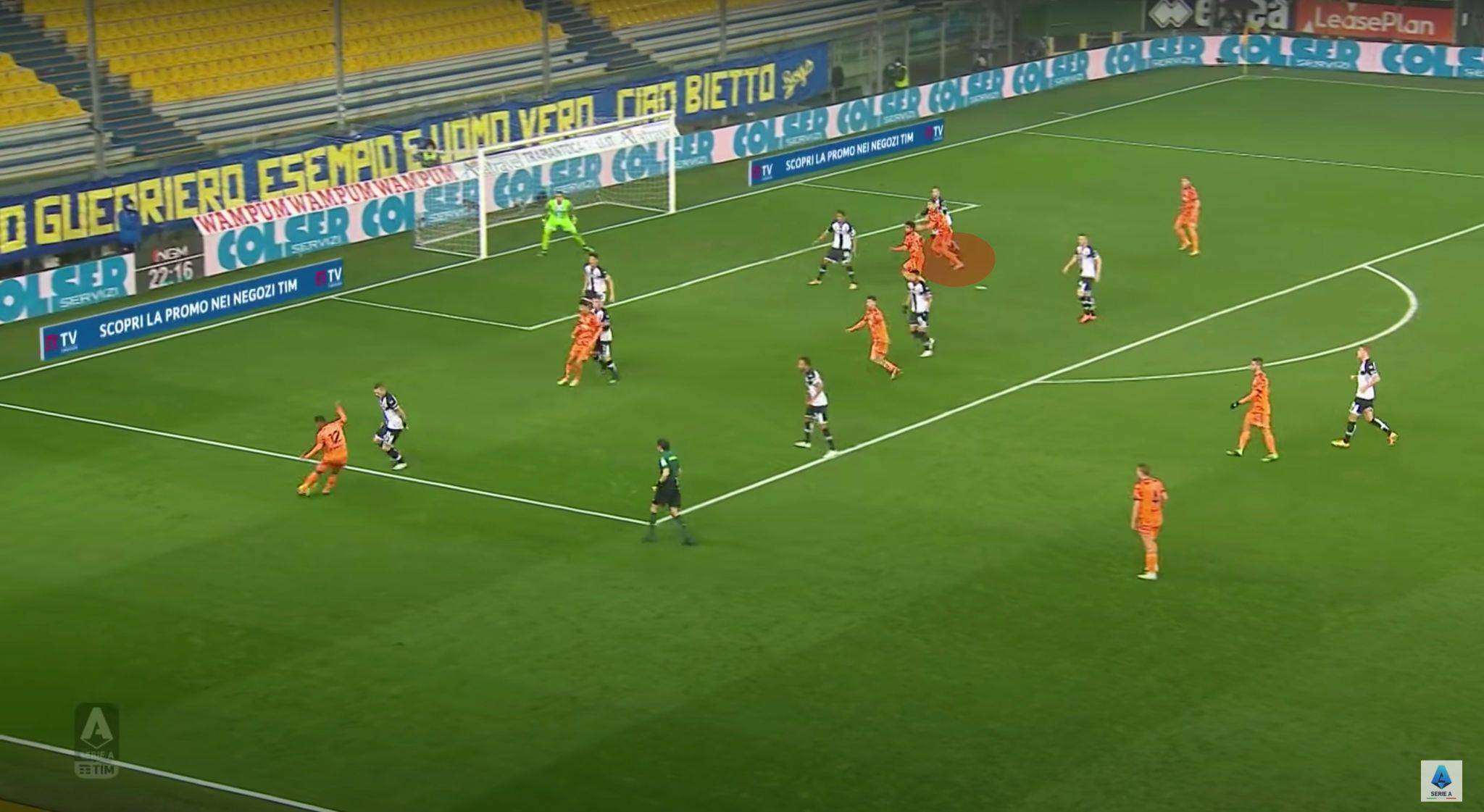 But the cross isn’t a cross, it’s a cutback. Everyone stops to watch and respond, but not Ronaldo. He keeps moving, well aware that a shot for another player so often turns into a rebound just as everyone else has relaxed.

Look at how every other player is more or less the same position. In contrast, Ronaldo is now completely free (though possibly offside) and waiting to pounce on a rebound, a deflection, or a wayward effort. 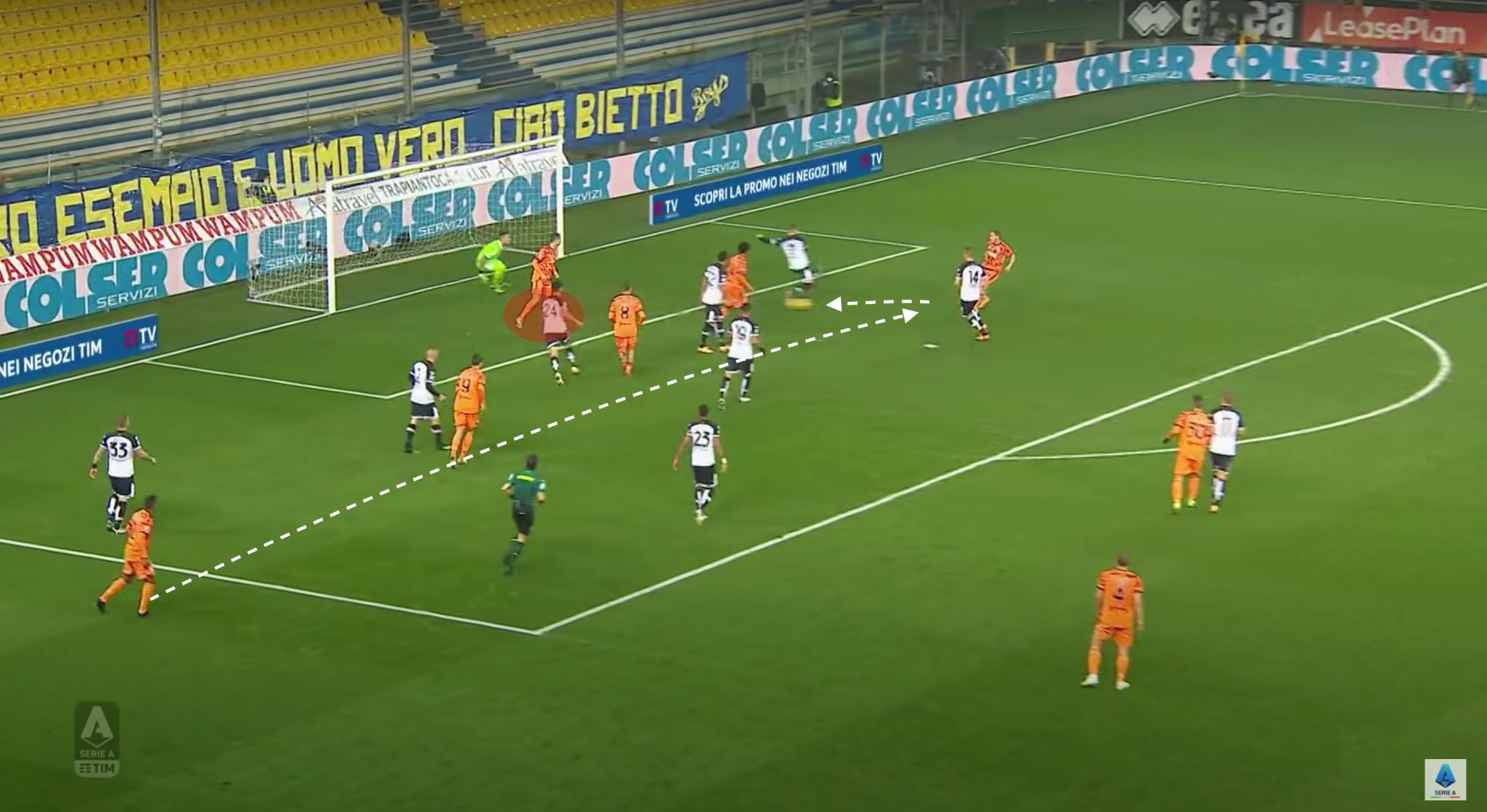 It was in this exact fashion that Ronaldo scored his first goal upon his return to Manchester United last month.

As Mason Greenwood shapes to shoot, every defender has their feet planted. Ronaldo, meanwhile, is on the move. 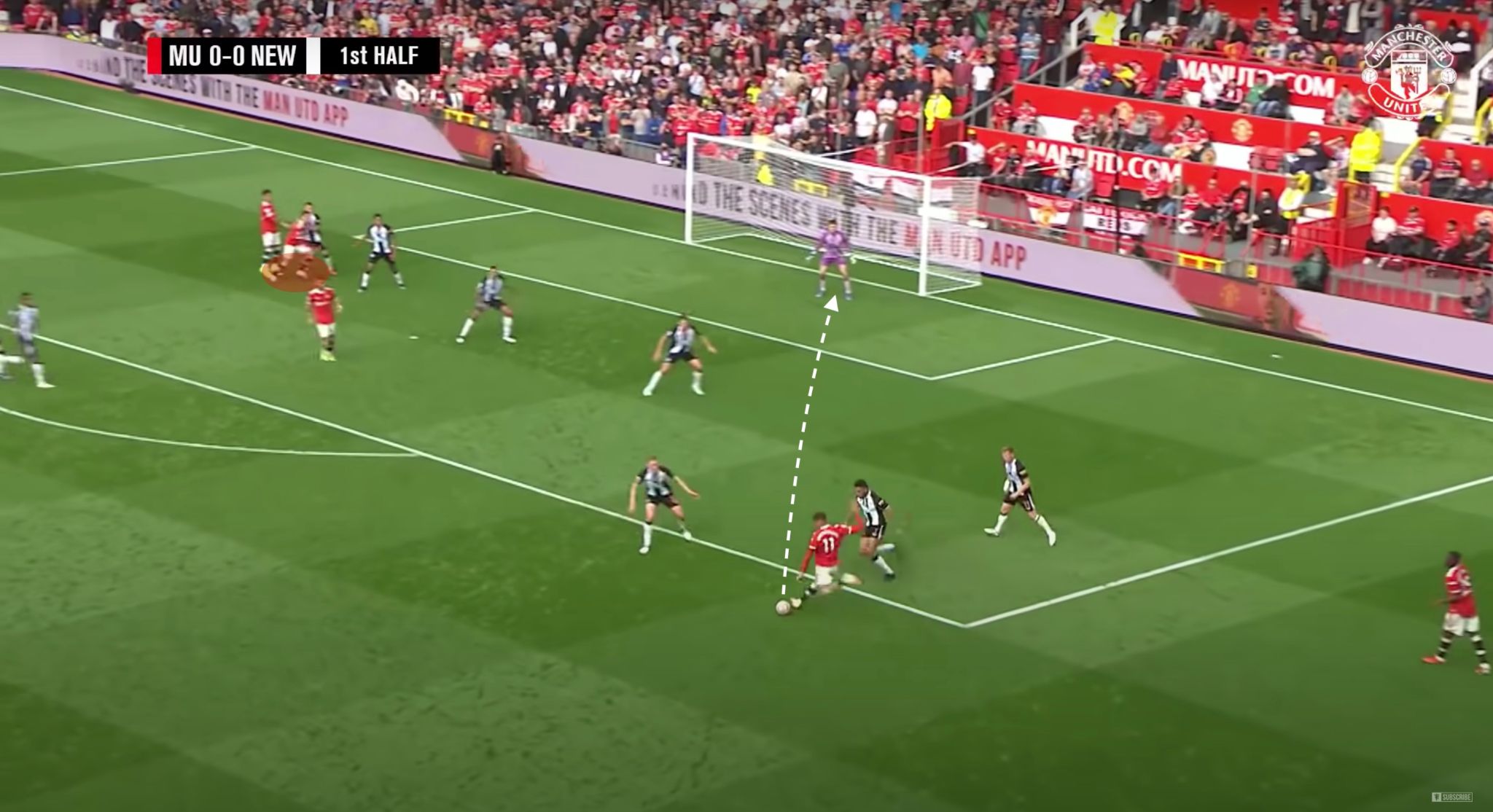 The process is the same as that Kulusevski goal, the result is different after the goalkeeper spills the shot. No defender has moved but Ronaldo is right in front of goal for a tap-in. 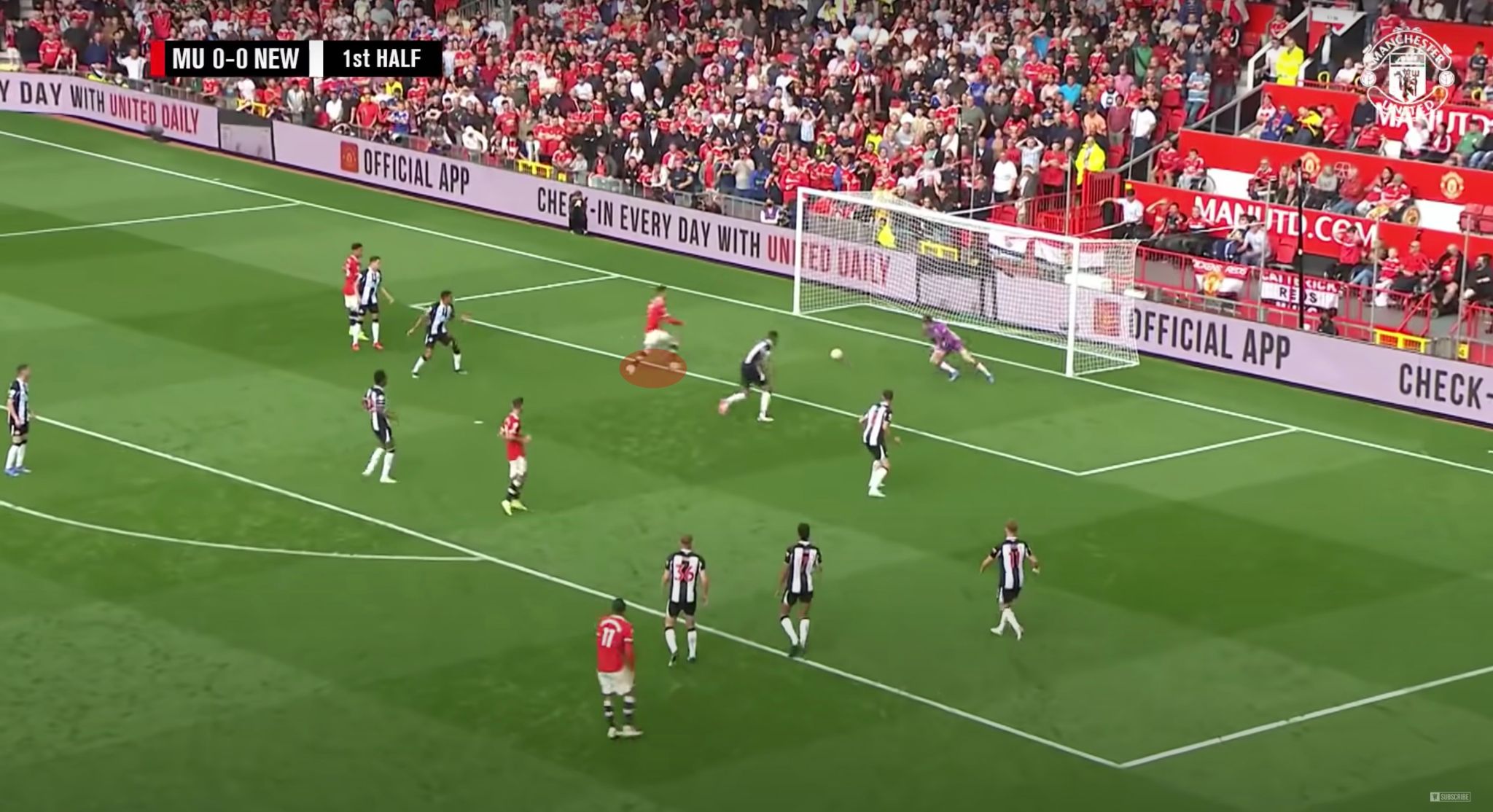 Ronaldo’s movement, hunger for goals, and anticipation for where the ball drops next underpins his sensational scoring record. It’s what sets him apart as a Ballon d’Or contender.

Robert Lewandowski may be the most difficult player on this list to pick a particular skill out for. He scores a lot of goals and a lot of them are different. Like Ronaldo, he moves brilliantly in the penalty area. He anticipates the game before pouncing on loose balls, rebounds and crosses for a huge number of his goals.

But the most impressive thing about him is how he is never, ever flustered. Lewandowski shoots when he chooses. That’s often with his first touch, because that’s when the chance is best, but he also often takes far more time than you would expect.

Most players try to get a shot away as soon as the opportunity arises. However, the Pole doesn’t compromise when it comes to shooting. He remains in complete control. He decides when he wants to shoot, often delaying for the optimal moment. That in turn reduces the possibility that he rushes, panics and snatches at the chance.

When the ball is bouncing uncomfortably and there is pressure from a defender he simply delays, as he did at Schalke last season. He waits for the ball to be under control and then waits for it to be out of his feet. 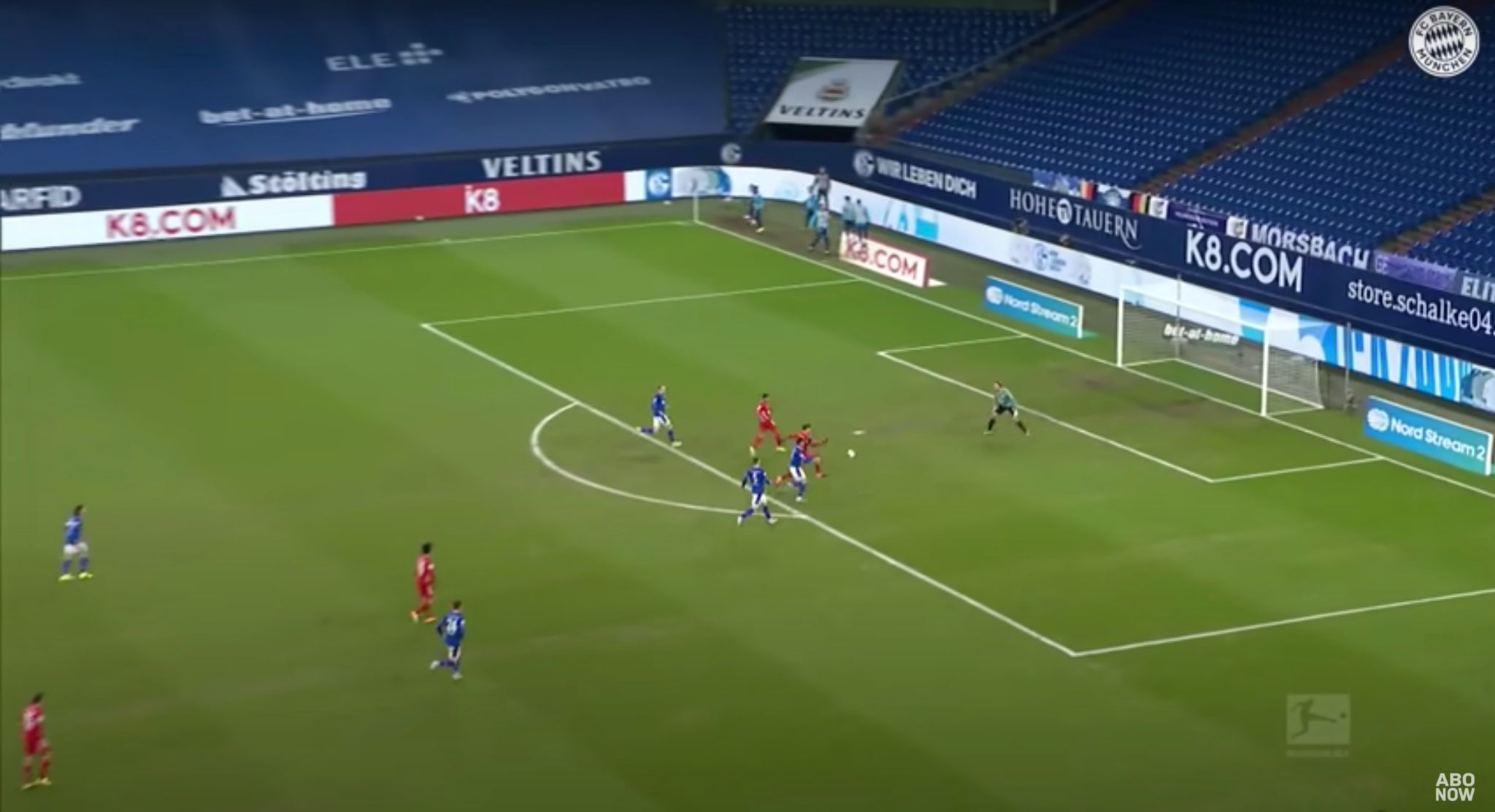 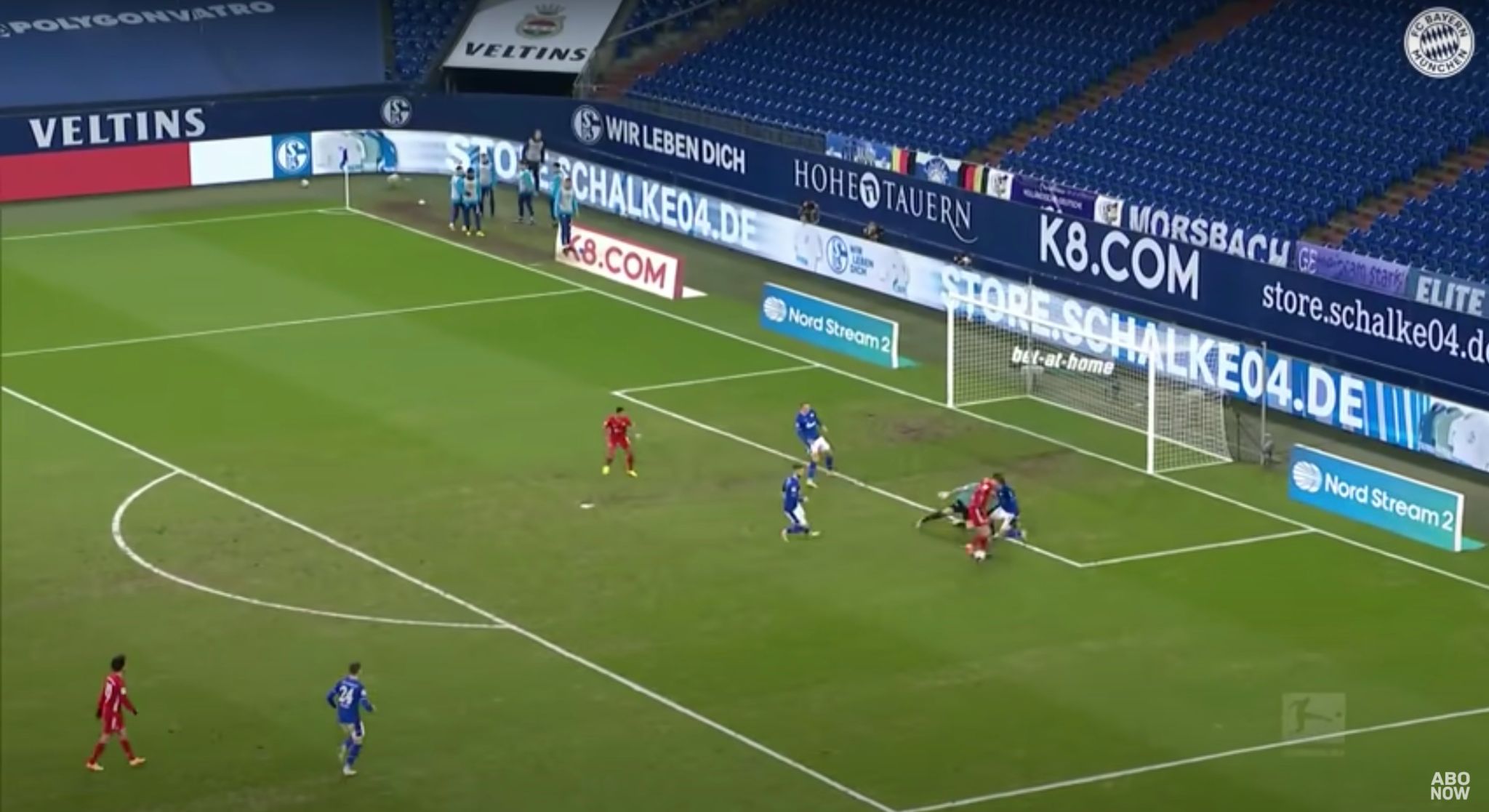 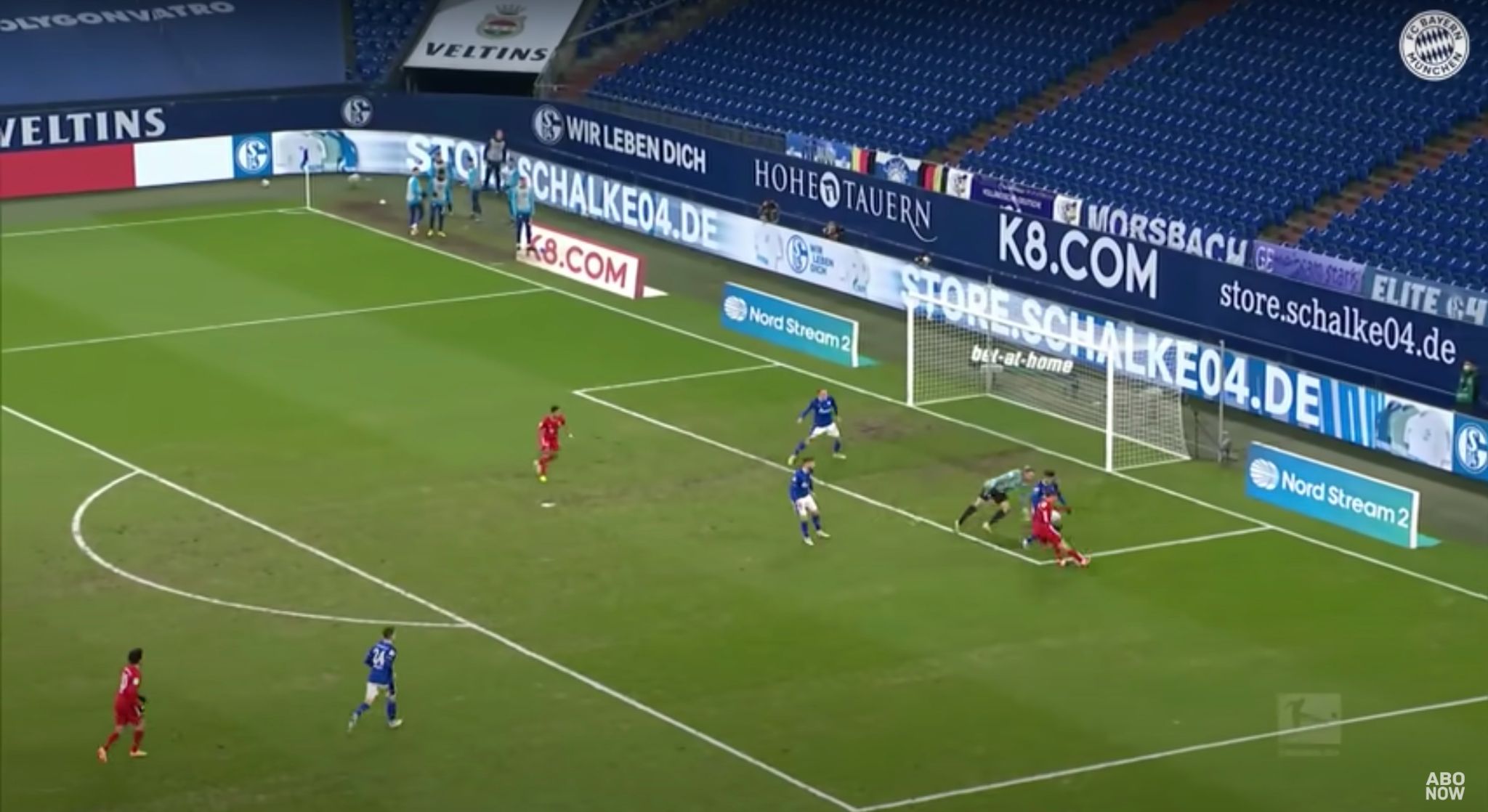 He did the same against Barcelona this season, when a Serge Gnabry effort struck the post and rebounded to him in the middle of the box. Most players would try to get a shot off right away. Instead, Lewandowski is focused on getting the ball under control first. 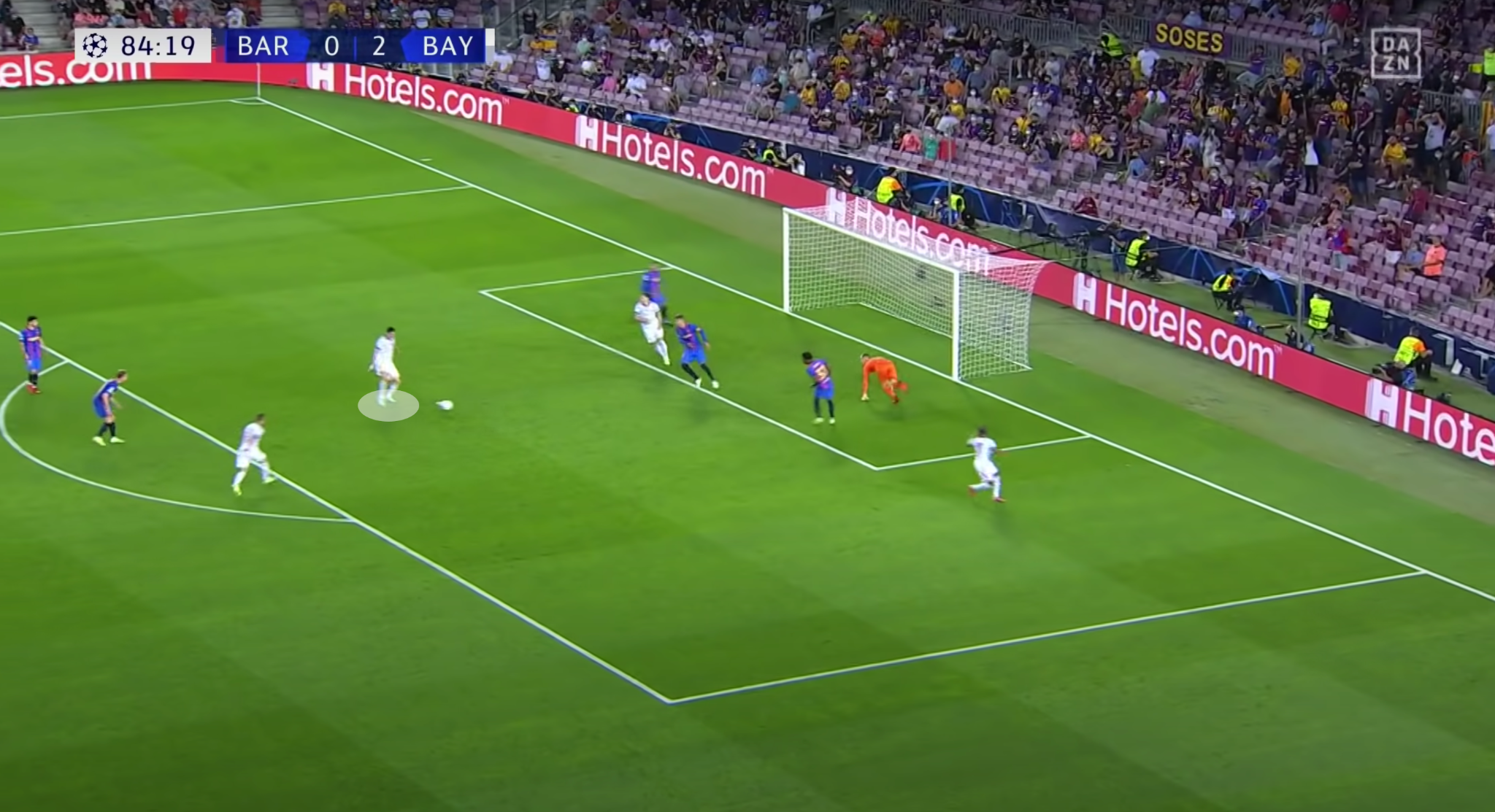 Then on calmly taking an extra touch to remove a defender from the equation. 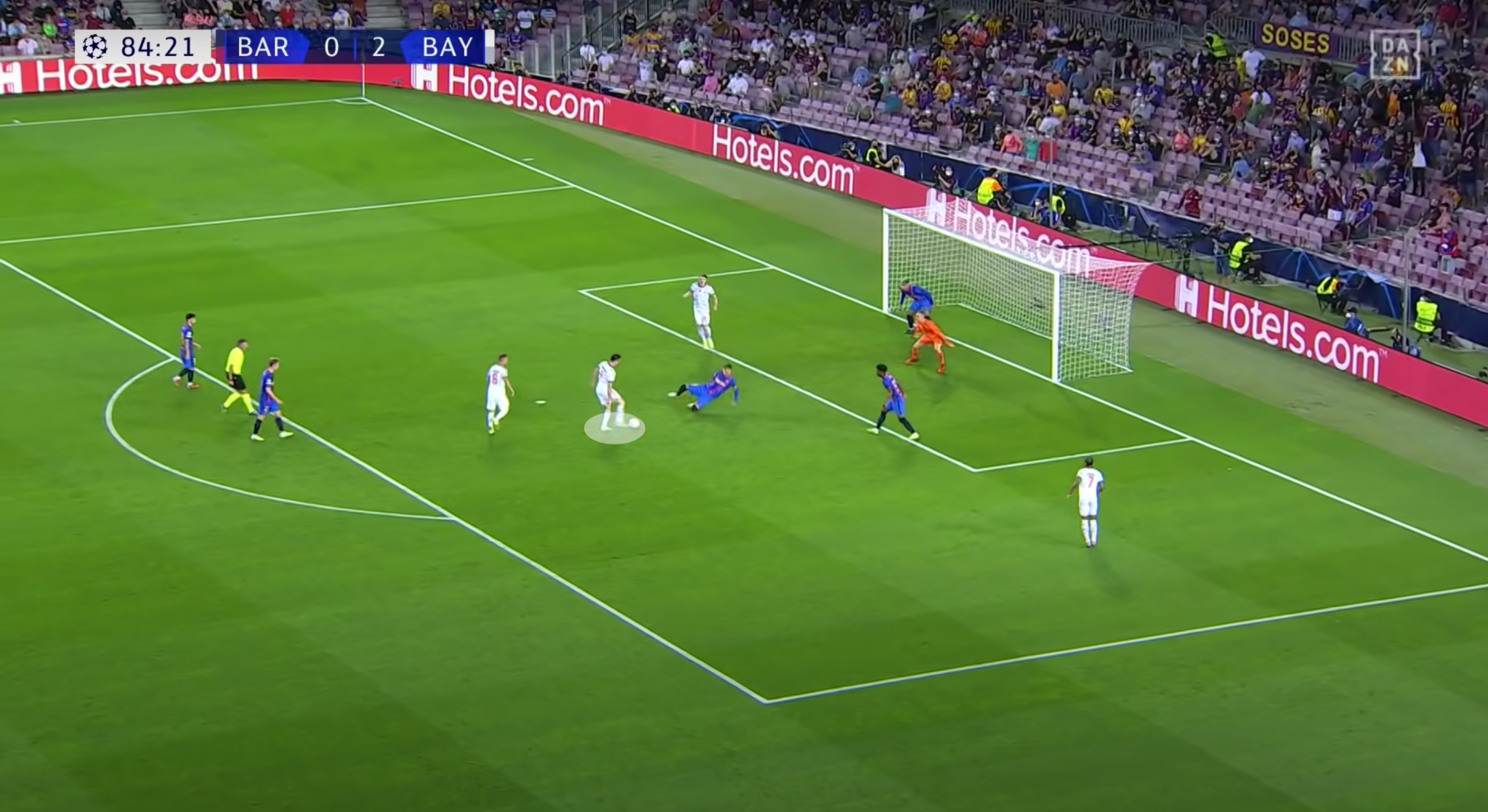 Before calmly picking his spot and pulling the trigger. 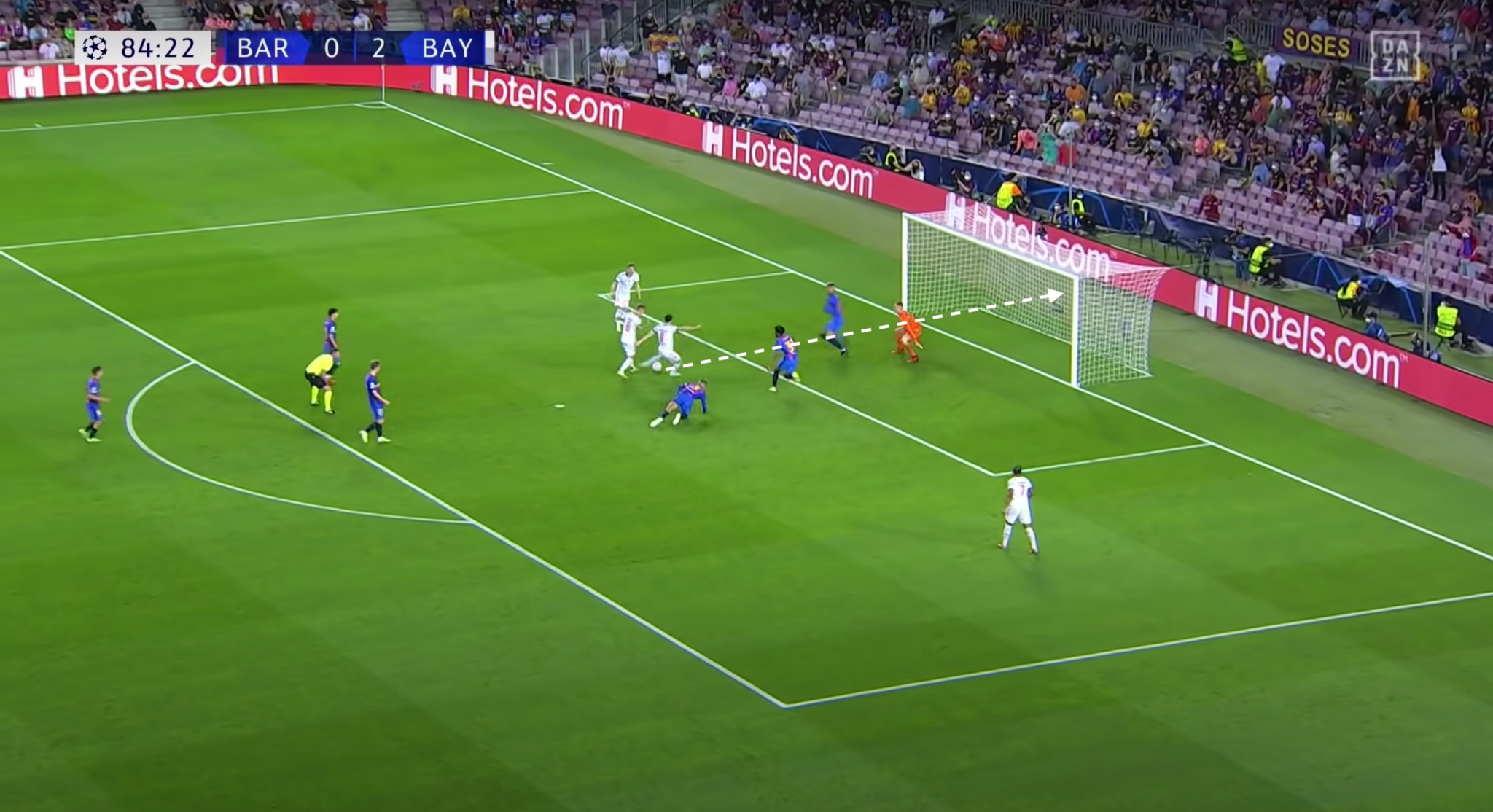 And it isn’t just in these rebound-like situations that Lewandowski takes his time, but also when through on goal, as he showed against Wolfsburg last December. Most players would get into this position and shoot. All Lewandowski is thinking about is getting into a better position. 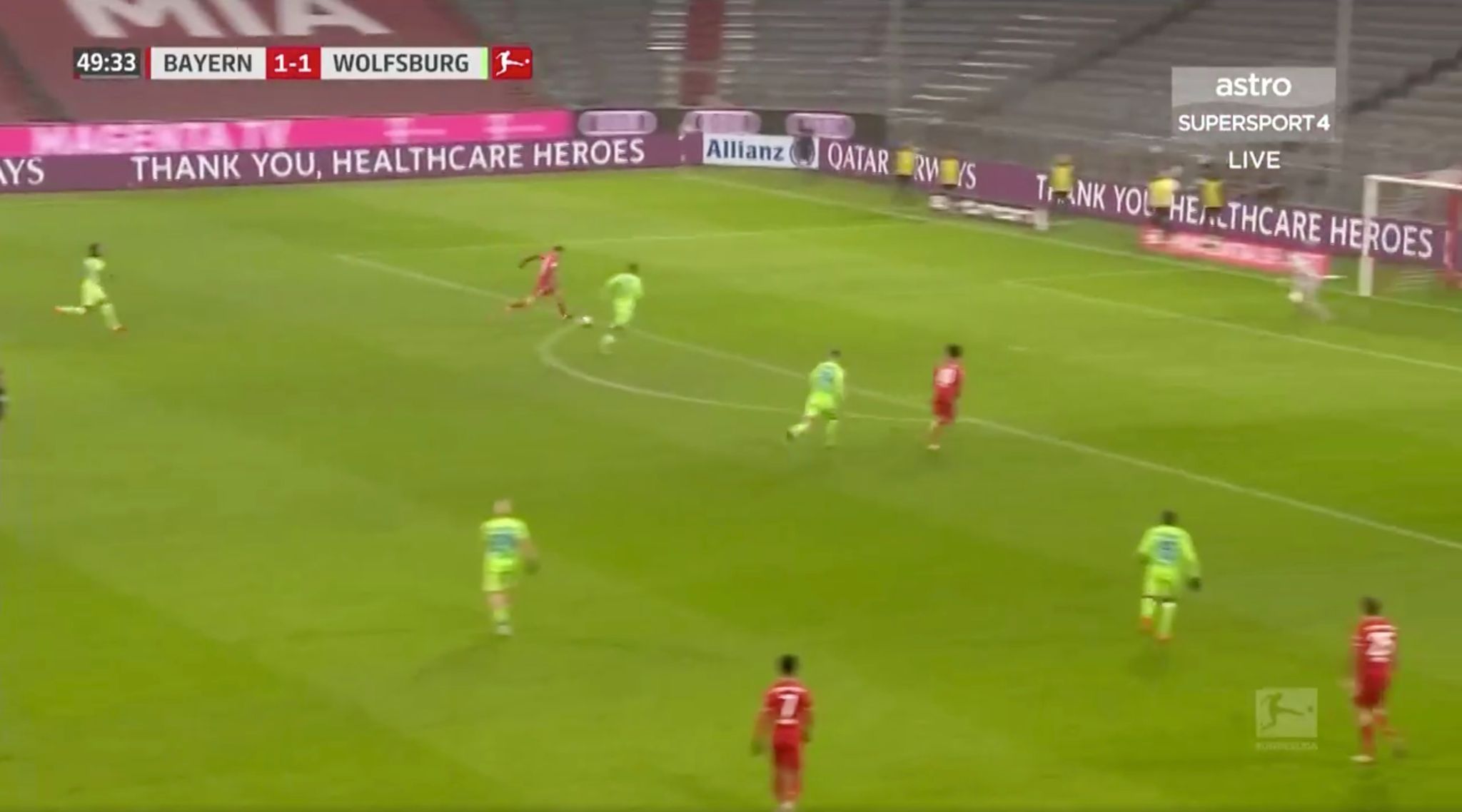 And even after he has cut inside the defender, he takes one more touch. 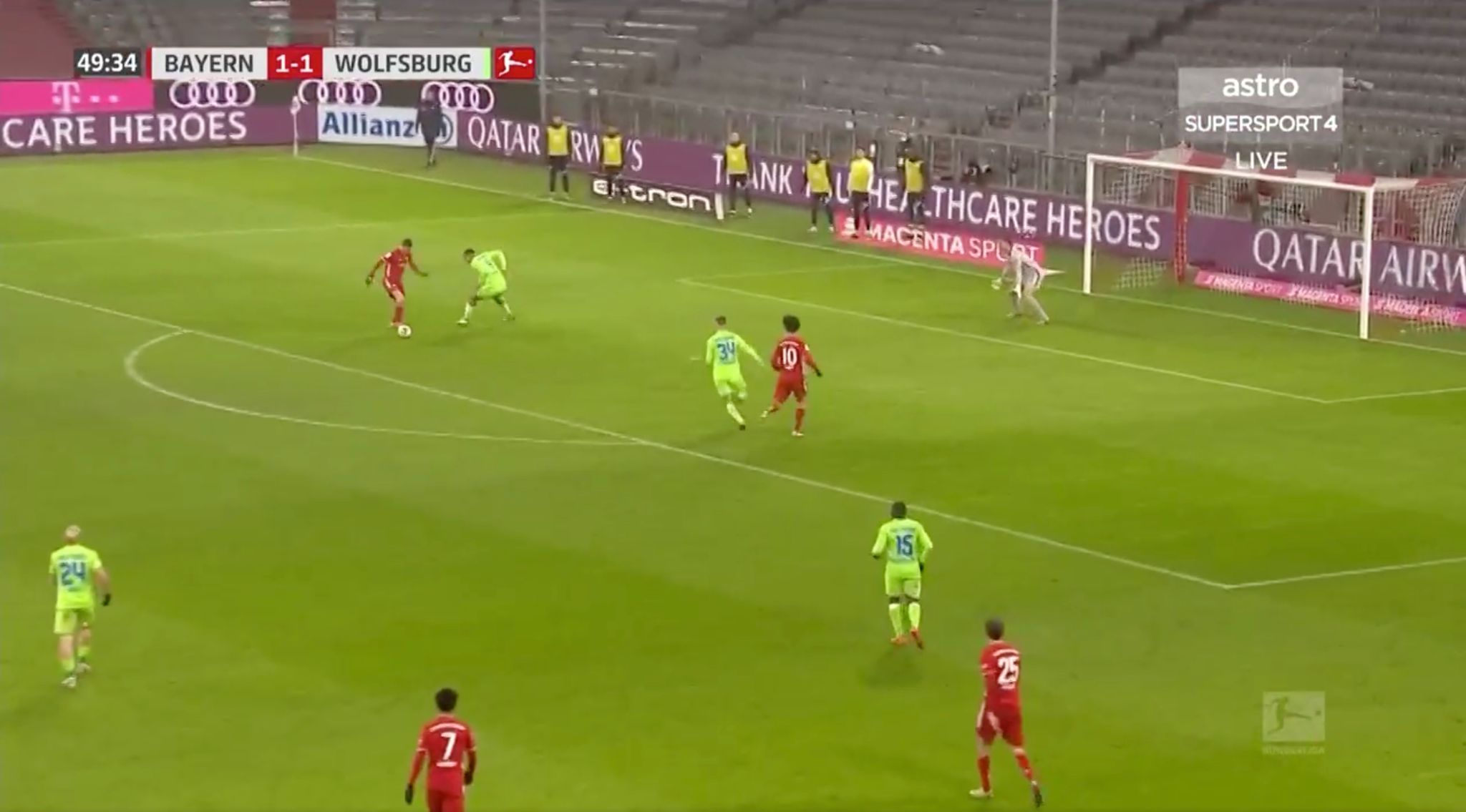 With that, the ball is sat perfectly in front of him and the goalkeeper, ready for a strike at goal, has had longer to deliberate, wait, consider just how many possibilities there are and make the first move before the striker picks his spot.

It’s a coolness that is unparalleled. And puts him in contention for the Ballon d’Or.

Karim Benzema always has a clear picture in his head: Of how things will develop when he receives the ball. The France and Real Madrid striker uses that, and his superb technical ability, to always take his first touch with his second — if he needs one — already in mind, and uses it to exploit his opponents and manipulate his own team-mates.

The latter can be seen whenever Benzema is involved in creating chances. A skill honed by playing with Cristiano Ronaldo for so long, Benzema is the rare force of a superb striker willing to sacrifice himself for the team. A centre-forward without an ego that never negatively impacts his game. His hold-up and link-up play is flawless, as he doesn’t just bring team-mates into play but makes their next decision straightforward with passes like this one against Mallorca earlier this season. 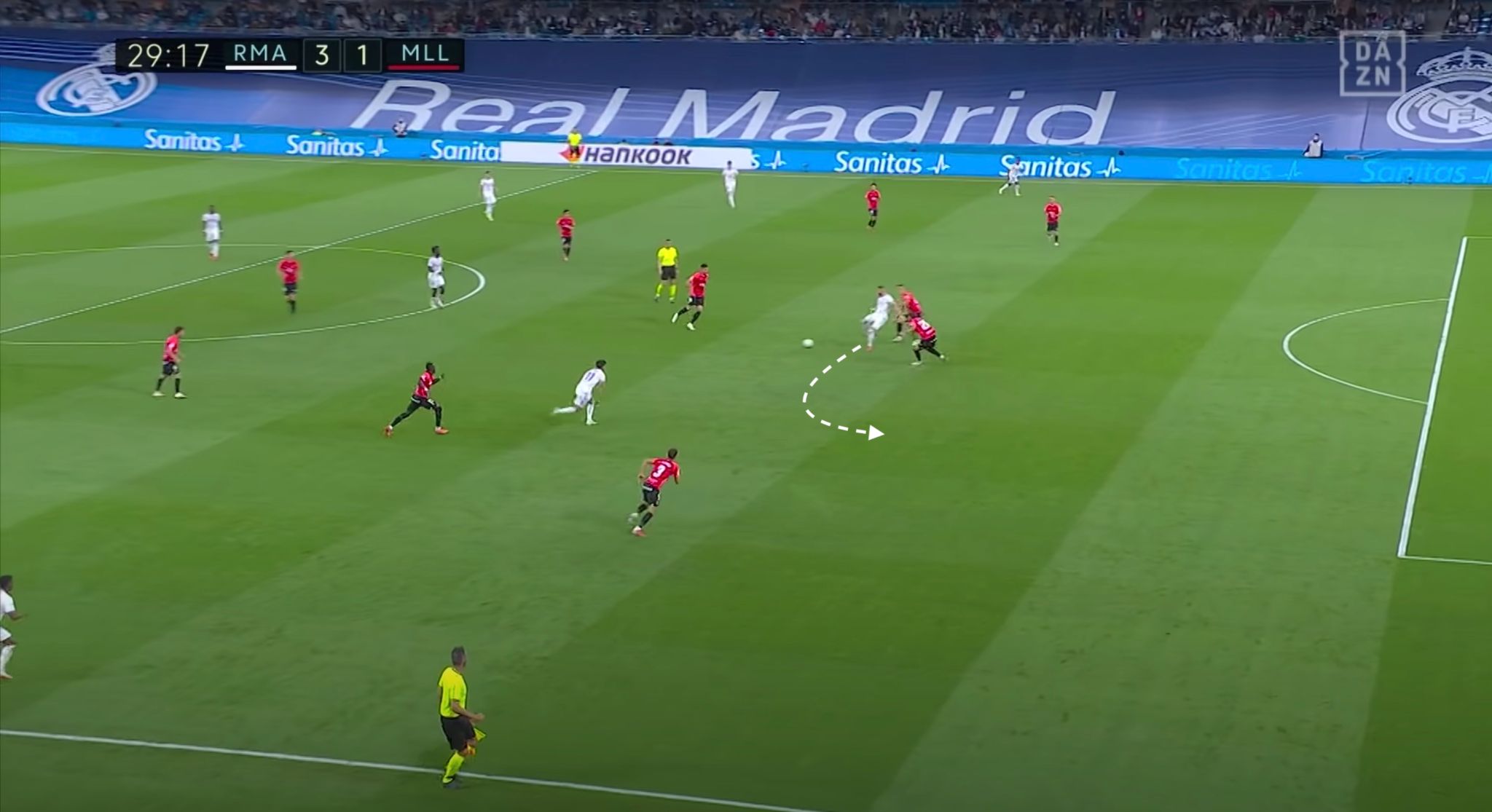 Benzema is still capable of that sort of thing since Cristiano Ronaldo’s departure but is also now the man tasked with carrying Real Madrid’s attack. In Ronaldo’s last two seasons at the club, Benzema scored a goal every 254.4 minutes in LaLiga. Since Ronaldo’s departure he has become the man everyone looks to and has scored a goal every 132.3 minutes. He no longer sacrifices his own goal threat to serve another’s.

And his first touch remains critical. No ball is too difficult to control and Benzema has the confidence to bring impossible crosses or passes under his spell as defenders stretch and panic to make a clearance. That technique means he can bring down crosses like this one against Huesca before firing home. 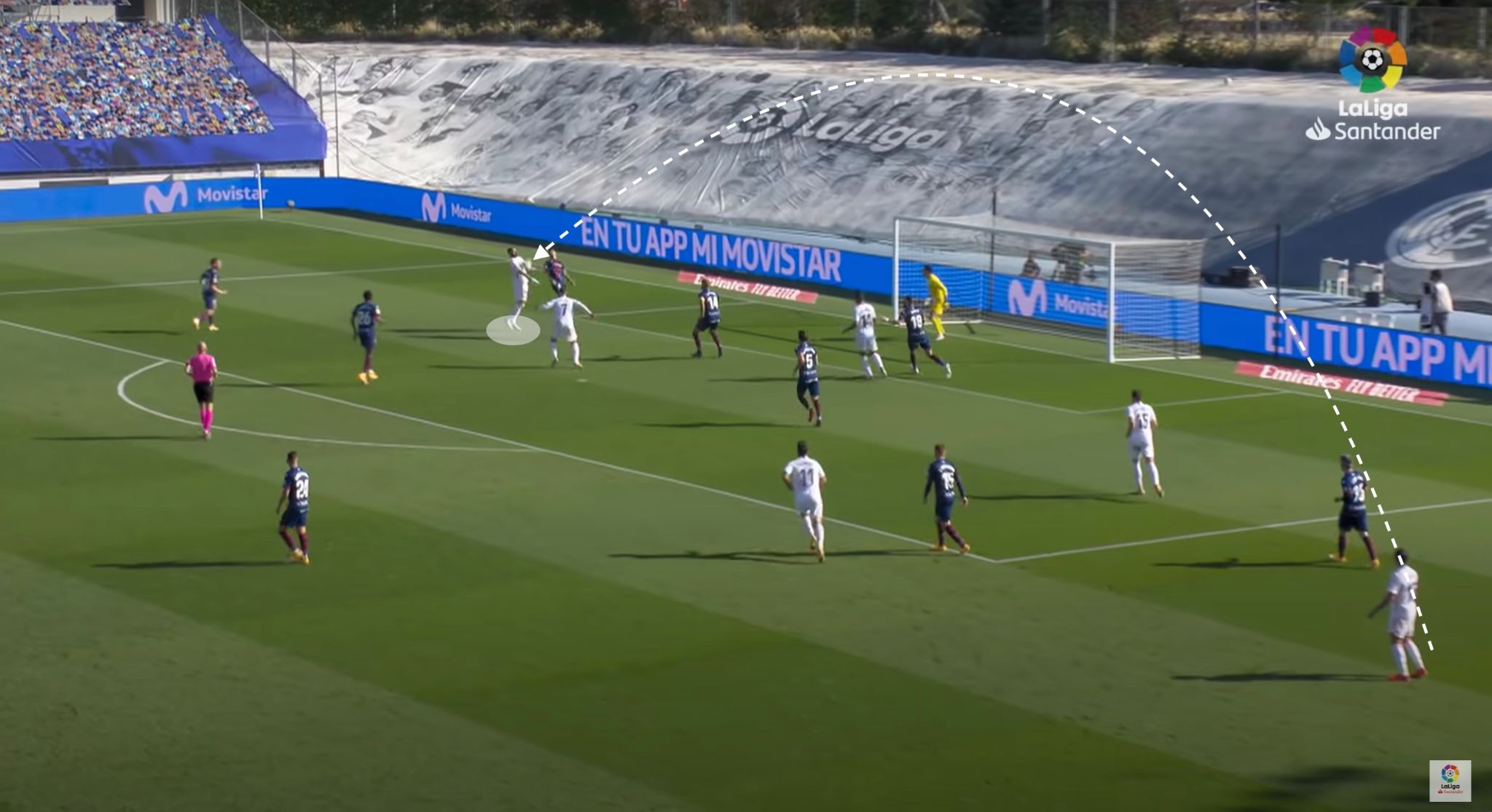 The finest example of his flawless control came at Euro 2020. With France trailing Switzerland, a pass arrived from Kylian Mbappé but was behind Benzema as he entered the box. 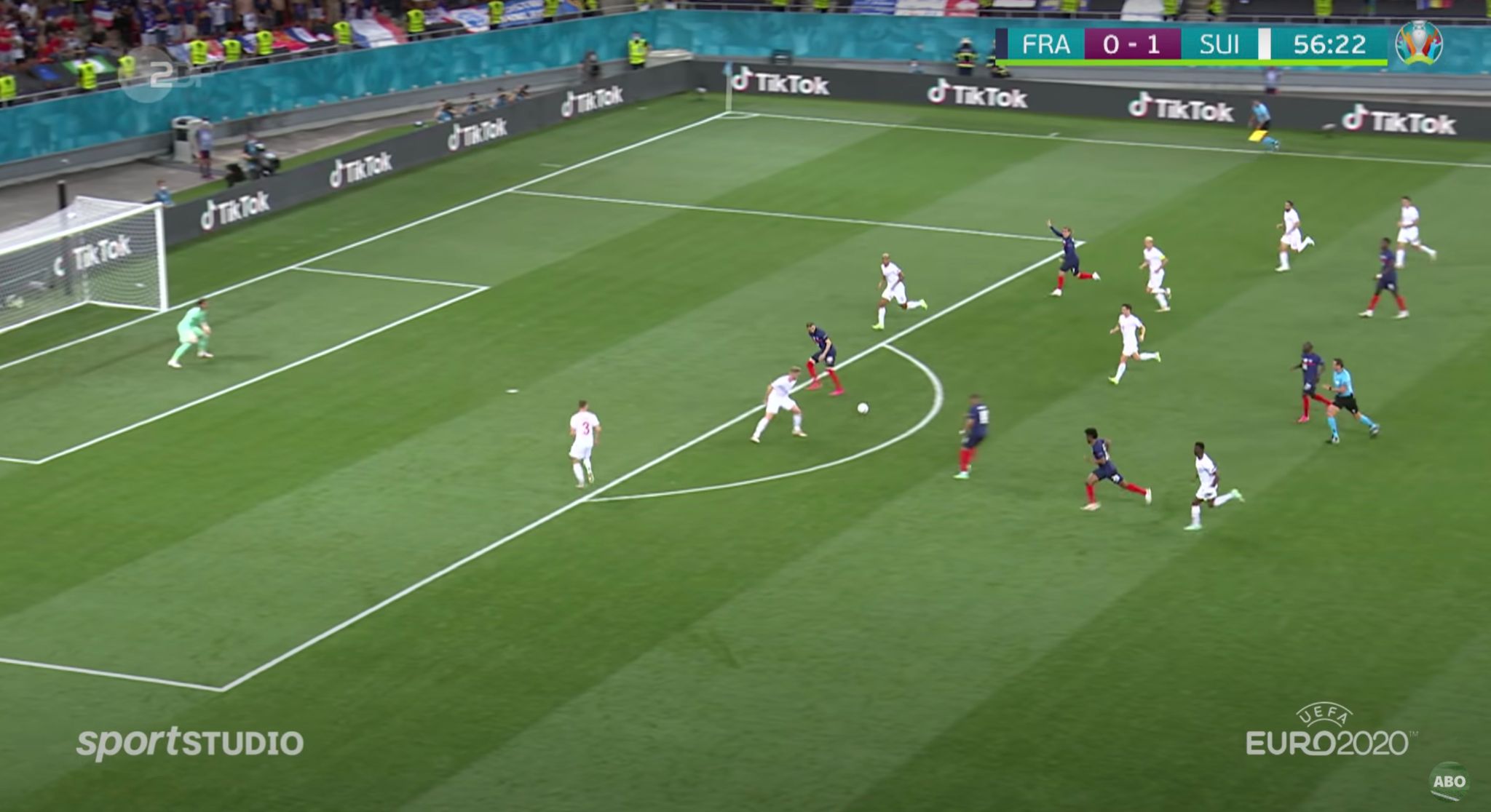 The striker paused his run but kept facing goal, eager to make a chance out of the ball rather than receiving it with his back to goal, dangled his back leg and flicked it back in front of himself. 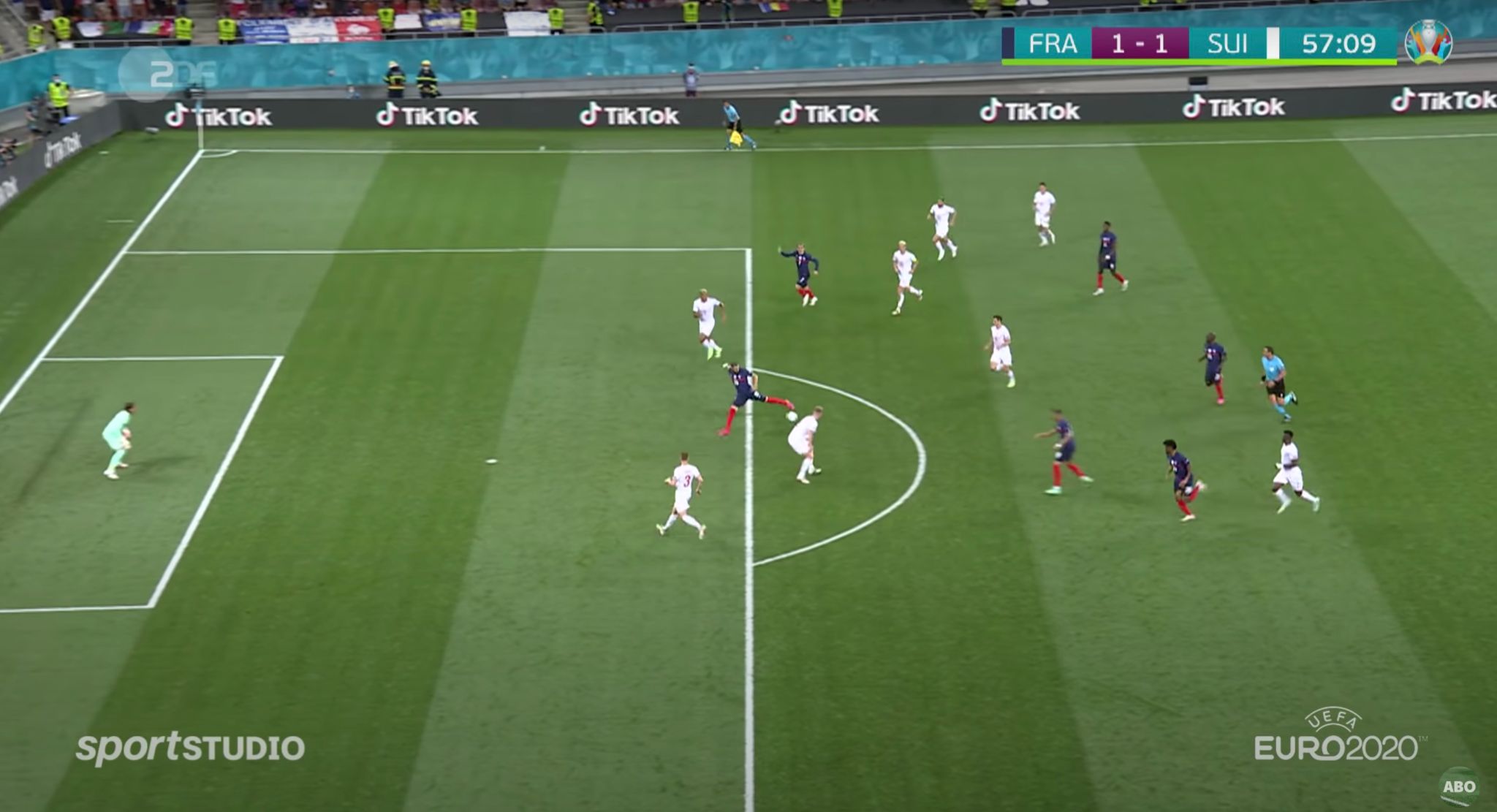 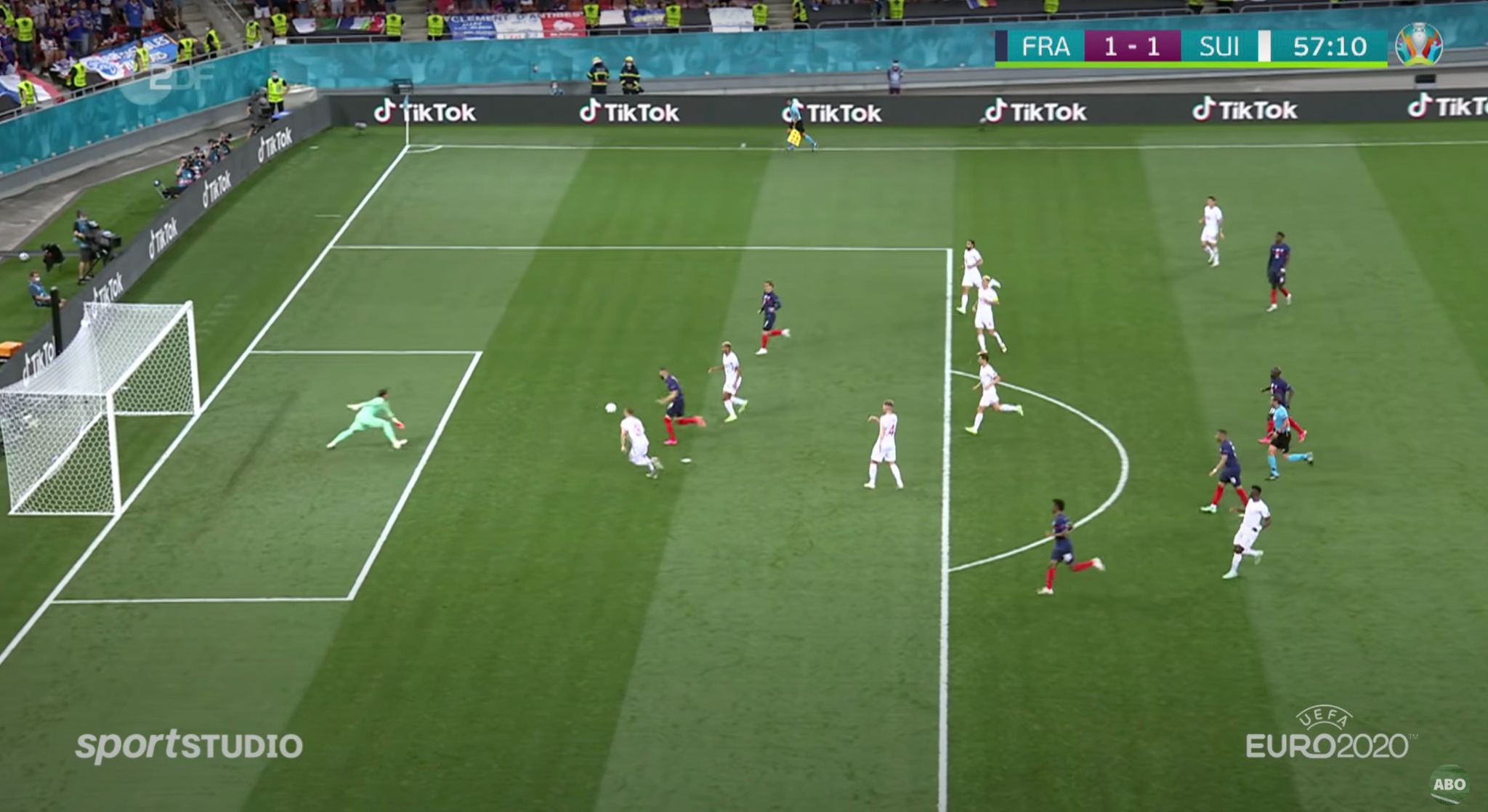 From there, he just had to beat goalkeeper Yann Sommer to the ball to dink it over the Swiss stopper.

Benzema, more than anyone else, has an ability to make things happen for himself and for his team-mates with a first touch that is to die for. This puts him firmly in the running for football’s greatest individual honour: the Ballon d’Or.

Lewis Ambrose is a football writer who contributes to the Arsenal-focused Arseblog and produces his own Bundesliga newsletter entitled Fussballinenglish. Originally from England, Lewis is now based in Germany and delights in exploring the finer details of the beautiful game.