Gabriel Benitez lost his last UFC fight against Billy Quarantillo via TKO in Round 3. Prior to this, he defeated Justin Jaynes by first-round TKO.

David Onama will be making his second appearance in the UFC. His debut didn’t go his way after dropping a unanimous decision to Mason Jones.

David Onama will be the betting favorite with opening odds of -145.

Gabriel Benitez opens as the betting underdog with odds of +130

This matchup between Gabriel Benitez vs David Onama was a late addition to the UFC Vegas 48 card. The fight was first reported on February 1st, less than 3 weeks before the event.

Benitez had a fight booked against TJ Brown in January but withdrew after missing weight.

Gabriel Benitez got bloodied up in his last bout against Billy Quarantillo, eventually losing via TKO in the third round.

Benitez has gone 1-3 in his last 4 UFC fights. His sole win in the last 3 years was a TKO victory over Justin Jaynes in December 2020.

David Onama lost a unanimous decision to Mason Jones on his UFC debut, with his opponent’s superior grappling proving the difference.

This was Onama’s first professional loss. He entered the UFC 8-0 with a 100% finishing rate.

David Onama is the taller fighter, standing at 5”11 compared to Benitez who is 5”8. Onama will also have a 3-inch reach advantage in the fight.

Gabriel Benitez is far more experienced in MMA with a total of 33 fights. In comparison, Onama has just 9 pro fights on his record.

Onama will be the younger fighter at 27, while Benitez is 33 years old.

This fight is an exciting matchup between a highly-touted newcomer and seasoned veteran. David Onama enters this fight having finished every single win in his career. Benitez is a hardened fighter who has finished 4 out of 6 wins in his UFC career.

Both fighters are coming off of losses so the stakes are considerable. Onama is looking to show the UFC why they signed him and make up for his first professional loss. Benitez is 1-3 in his last 4 and will need a win to keep his UFC career going.

The oddsmakers’ predictions see David Onama as the small favorite in this bout.

Get your Gabriel Benitez vs David Onama picks in.

Where to bet on Gabriel Benitez vs David Onama

Gabriel Benitez vs David Onama tale of the tape 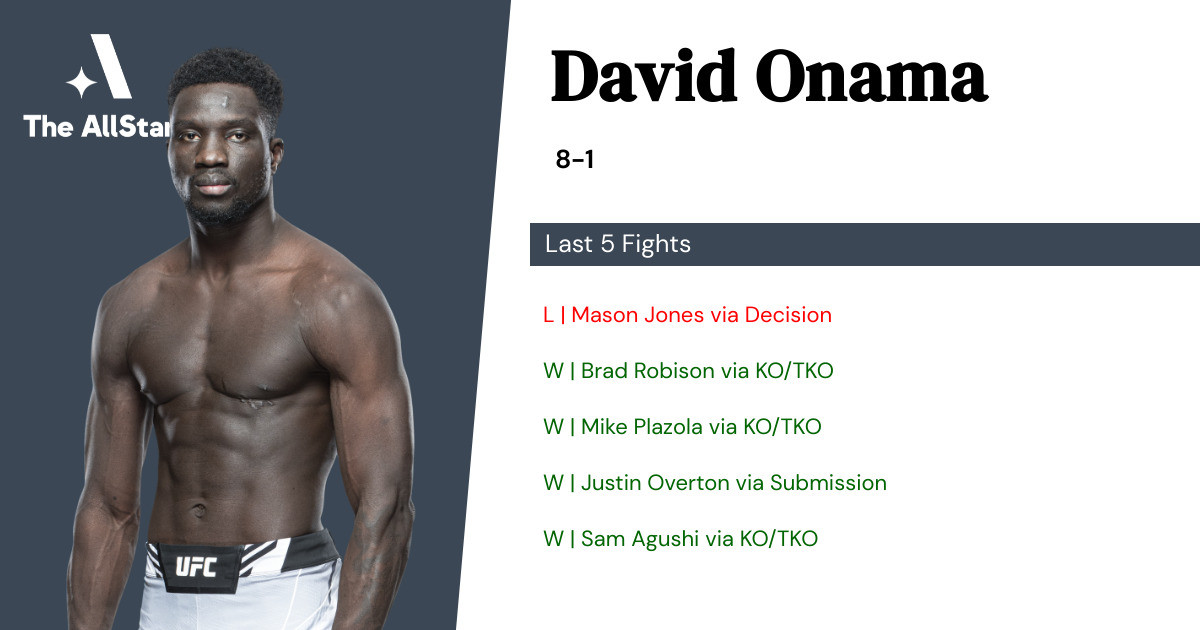 David Onama has a 100% finish rate, including 5 by knockout, 3 by submission.

David Onama is looking to get back to winning ways after a loss at the hands of Mason Jones at UFC Fight Night: Costa vs. Vettori. 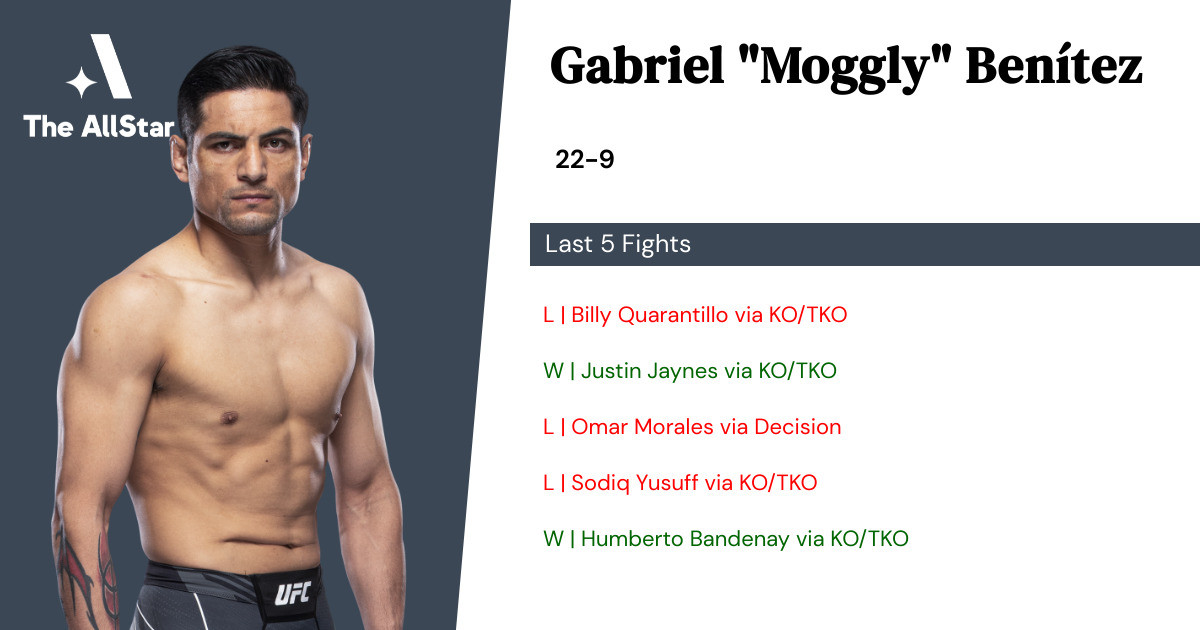 Gabriel Benítez has a 82% finish rate, including 8 by knockout, 11 by submission, 4 by decision.

Gabriel Benítez is looking to get back to winning ways after a loss at the hands of Billy Quarantillo at UFC Fight Night: Makhachev vs. Moisés.

Gabriel Benitez vs David Onama is set to go down at UFC Fight Night – Dos Anjos vs. Fiziev. The fight is expected to start at around 5:00pm EST on Saturday 19th February 2022.

ESPN+ is the best option to live stream Gabriel Benitez vs David Onama if you live in the United States. Outside of the USA, the best option is to register for UFC Fight Pass.

Where can I get the best odds for the Gabriel Benitez vs David Onama UFC fight?

Use the AllStar’s directory to find the best sportsbooks and recommendations on where to place UFC bets online. If you just want to play for fun, head over to to our Fantasy UFC picks app to make your fight predictions for Gabriel Benitez vs David Onama totally FREE.