Islam Makhachev vs Bobby Green is set to go down at UFC Vegas 49: UFC Fight Night at 10:30pm EST on Saturday 26th February 2022 in a 160lbs catchweight matchup.

Bobby Green steps into this huge fight on just 10 days’ notice after Beneil Dariush pulled out with a foot injury. Green fought as recently as February 12th, beating Nasrat Haqparast via unanimous decision at UFC 271.

Islam Makhachev boasts an impressive 9-fight win streak, with his submission victory over Dan Hooker at UFC 267 making it three submission finishes in a row for the Russian.

Islam Makhachev will be the betting favorite with opening odds of -1000.

Bobby Green is the betting underdog with opening odds of +600.

This matchup between Bobby Green vs Islam Makhachev was first reported on February 17th by Brett Okamoto.

The headline fight at UFC Vegas 49 was scheduled to be Islam Makhachev vs Beneil Dariush. However, Dariush pulled out with a foot injury 10 days before the fight.

This bout will be a five-round main event to headline the UFC Vegas 49 card. It will be contested at a 160lbs catchweight.

Bobby Green only just notched up a decision victory of Nasrat Haqparast before agreeing to take this fight. He has won two fights in a row, the other a first-round KO against Al Iaquinta.

Green has won 5 of his last 7 UFC fights, including notable victories over Lando Vanatta and Clay Guida. He was also involved in an exhilarating Fight of the Night with Rafael Fiziev at UFC 265 in August.

Islam Makhachev is considered to be next in line for a title shot after Justin Gaethje should he get past late-replacement Bobby Green. He has won nine fights in a row, with his last three wins all coming via submission.

Makhachev hasn’t lost a fight in over 6 years since he suffered a shock knockout loss in his second-ever UFC fight against Adriano Martins in October 2015.

Bobby Green and Islam Makhachev are both the same height at 5”10. Green is 5 years older than Makhachev at 35 years old.

The striking stats show a big difference in terms of strikes landed and absorbed. Green lands more than double the significant strikes per minute than Makhachev (5.93 to 2.21), although he also absorbs far more strikes per minute (3.65 to 0.79).

This will be an intriguing fight between two Lightweights on a hot streak. Given that neither fighter has trained for their opponent, anything could happen in this short-notice matchup.

Islam Makhachev is touted by many as the heir to the 155lbs throne and has looked almost untouchable in his last few fights.

Bobby Green is one of the smoothest boxers in the UFC who is extremely hard to hit. His stick-and-move style could cause serious problems for Makhachev.

The stakes are still massive for Islam Makhachev despite Dariush dropping out. A win here would likely put him next in line for a title shot after Oliviera fights Gaethje.

Bobby Green has little to lose and everything to gain in this fight. Beating Makhachev on 10 days’ notice would give Green a legendary victory that would be remembered for years.

The oddsmakers’ predictions have Islam Makhachev as the prohibitive favorite with opening odds of -1000.

Makhachev’s training partner and former 155lb champion, Khabib Nurmagamedov, sees Makhachev as the next champion in the division.

“If Bobby Green finds himself on the ground, I can see him getting mauled by Makhachev.”

Kenny Florian made the following pick on the Anik & Florian podcast:

“Bobby Green is a very unorthodox fighter. But, Makhachev has looked so dominant. I see him being a champion in the future.”

Get your Bobby Green vs Islam Makhachev picks in.

Islam Makhachev vs Bobby Green tale of the tape

Islam Makhachev has the better record against the shared opposition, at 1-0 to Bobby Green’s record of 0-1 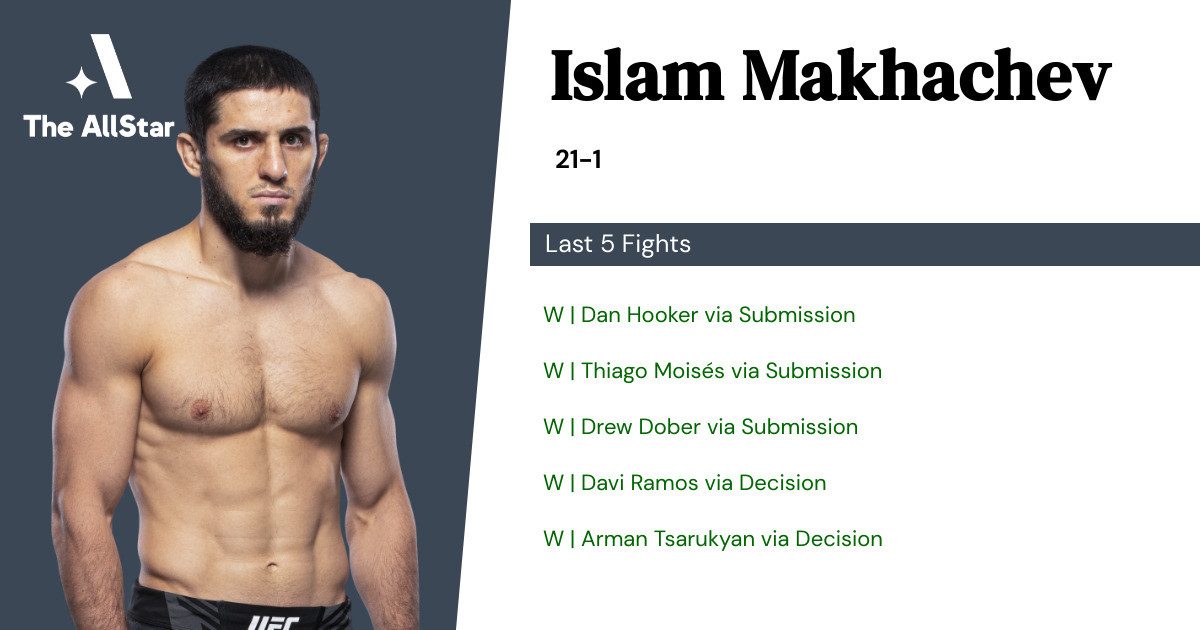 Islam Makhachev has a 62% finish rate, including 3 by knockout, 10 by submission, 8 by decision. 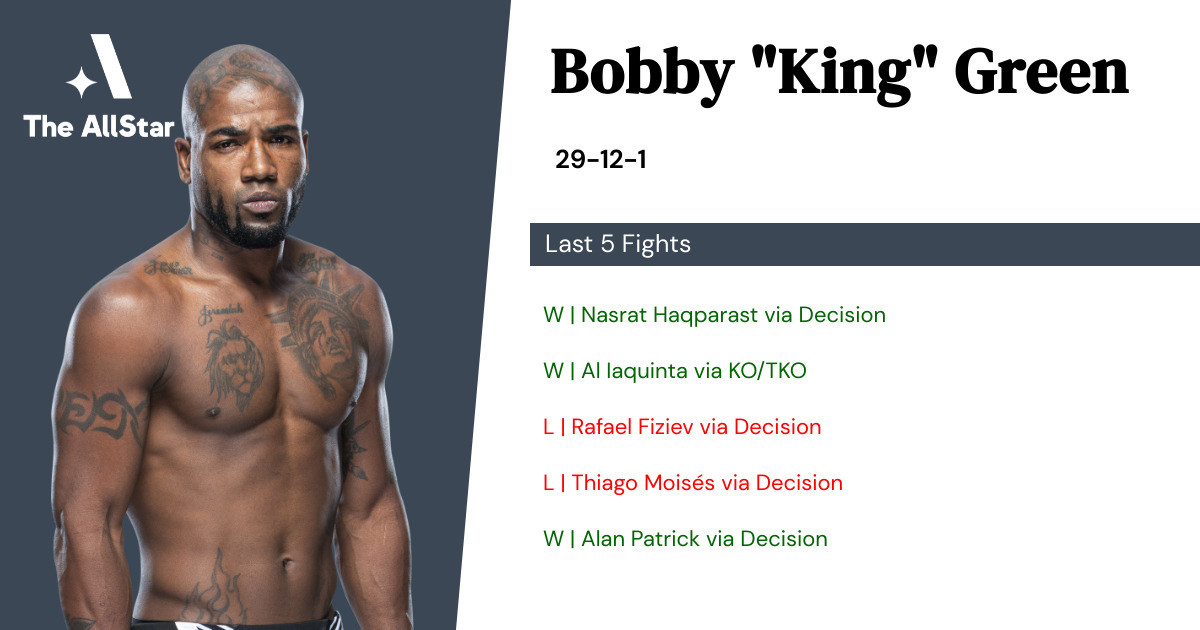 Islam Makhachev vs Bobby Green is set to go down at UFC Vegas 49 – UFC Fight Night. The fight is expected to start at around 10:30pm EST on Saturday 26th February 2022.

ESPN+ is the best option to live stream Islam Makhachev vs Bobby Green if you live in the United States. Outside of the USA, the best option is to register for UFC Fight Pass.

Where can I get the best odds for the Islam Makhachev vs Bobby Green UFC fight?

Use the AllStar’s directory to find the best sportsbooks and recommendations on where to place UFC bets online. If you just want to play for fun, head over to to our Fantasy UFC picks app to make your fight predictions for Islam Makhachev vs Bobby Green totally FREE.