Joaquin Buckley returned to the win column in his last UFC appearance with a KO victory over Antonio Arroyo. Buckley is 3-1 in his last 4 UFC fights, with all 3 victories coming by way of knockout.

Joaquin Buckley will enter this fight as the slight betting favorite with opening odds of -145. Abdul Razak Alhassan will be the betting underdog with his opening odds set at +130.

This fight was initially scheduled to go down at UFC Vegas 46 on January 15th before Alhassan pulled out. The bout was rebooked for February 19th and will take place on the main card.

Joaquin Buckley bounced back from a disappointing loss to Alessio Di Chirico by securing a third-round knockout victory against Antonio Arroyo, earning himself a Performance of the Night bonus in the process.

Go all angles on @NewMansa94's masterpiece 😳

Buckley is 3-2 in his UFC career and best known for his incredible jumping spinning back kick knockout against Impa Kasanganay in 2020.

After an excellent start to his UFC career where Alhassan went 4-1 (with all 4 wins coming by first-round KO), Alhassan lost three on the bounce before his recent victory against Di Chirico.

Both fighters stand 5”10 tall, although Buckley will have a 3-inch reach advantage. Buckley is also significantly younger at 27 years old, while Alhassan is 36.

Both men are well-matched statistically in terms of strikes landed and absorbed. One big difference is in their respective takedown defenses. Buckley has maintained a 100% takedown defence, while for Alhassan this figure stands at 55%.

This matchup squares off two of the division’s most dangerous knockout artists, so you won’t want to miss a second. Both fighters have won by knockout in every UFC victory on their record.

Alhassan has five first-round KO’s in his UFC career, while Buckley has three KO wins. They both bring incredible power, speed and technique, so don’t blink.

Both fighters are looking to build off their recent wins and climb up the rankings. For Buckley, a win here would almost certainly bring a Top 15 opponent next. Alhassan can take out one of the division’s most dangerous strikers and rebuild his UFC career.

The bookies’ predictions have Joaquin Buckley as the slight favorite, although this fight could be anyone’s.

Get your Joaquin Buckley vs Abdul Razak Alhassan picks in.

Where to bet on Joaquin Buckley vs Abdul Razak Alhassan

Joaquin Buckley vs Abdul Razak Alhassan tale of the tape

Abdul Razak Alhassan has the better record against the shared opposition, at 1-0 to Joaquin Buckley’s record of 0-1 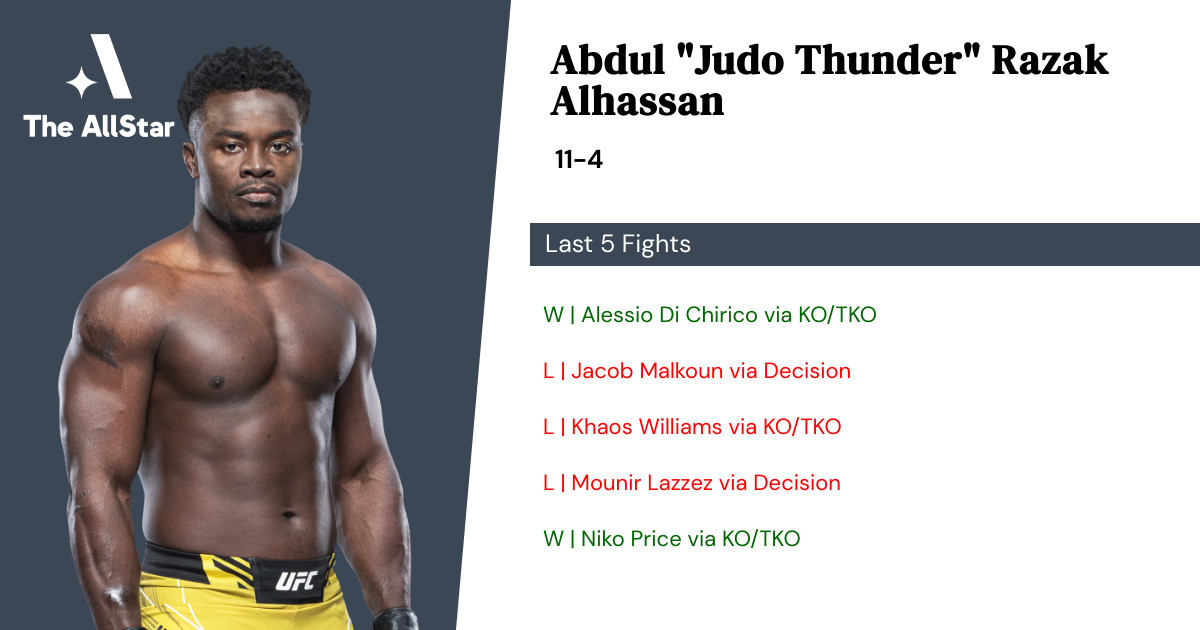 Abdul Razak Alhassan has a 100% finish rate, including 11 by knockout. 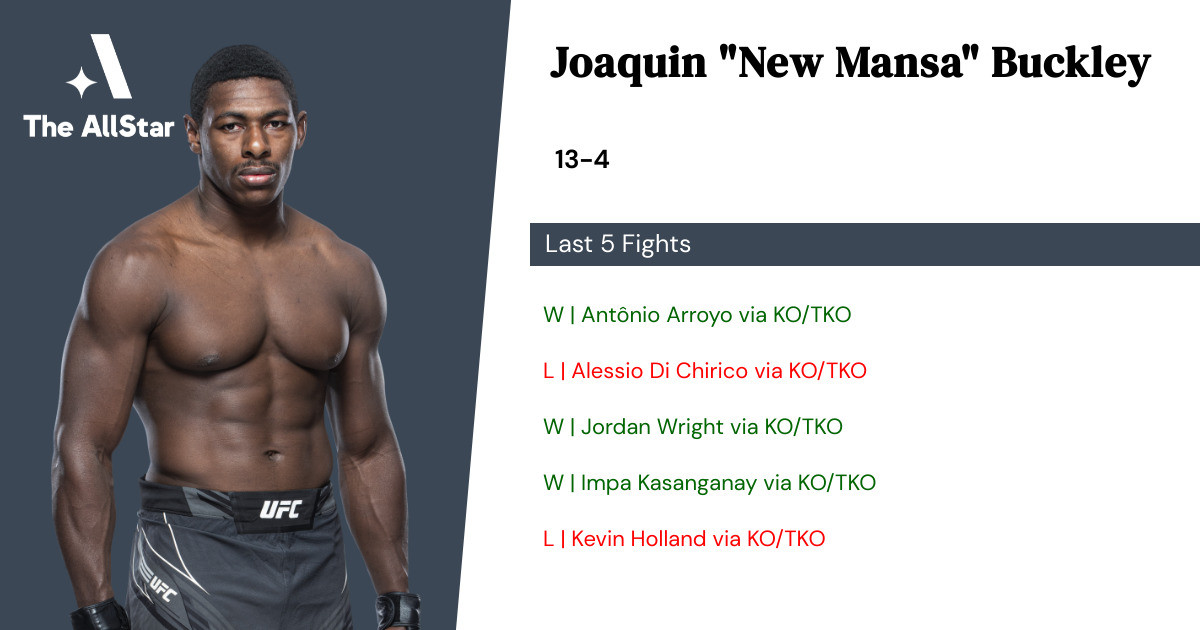 Joaquin Buckley has a 77% finish rate, including 10 by knockout, 3 by decision.

Joaquin Buckley is looking to put together a winning streak, having last beaten Antônio Arroyo at UFC Fight Night: Smith vs. Spann.

Joaquin Buckley vs Abdul Razak Alhassan is set to go down at UFC Fight Night – Dos Anjos vs. Fiziev. The fight is expected to start at around 10:00pm EST on Saturday 19th February 2022.

ESPN+ is the best option to live stream Joaquin Buckley vs Abdul Razak Alhassan if you live in the United States. Outside of the USA, the best option is to register for UFC Fight Pass.

Where can I get the best odds for the Joaquin Buckley vs Abdul Razak Alhassan UFC fight?

Use the AllStar’s directory to find the best sportsbooks and recommendations on where to place UFC bets online. If you just want to play for fun, head over to to our Fantasy UFC picks app to make your fight predictions for Joaquin Buckley vs Abdul Razak Alhassan totally FREE.