Marlon Moraes vs Yadong Song is set to go down at UFC Fight Night: Santos vs. Ankalaev at 11:00pm EST on Saturday 12th March 2022 in a 135lbs matchup.

Yadong Song has won two-in-a-row with victories over Casey Kenney and Julio Arce. Song has accumulated a 7-1-1 record in the UFC.

Yadong Song opens as the betting favorite with betting odds of -240.

Marlon Moraes is the betting underdog with opening odds of +210.

This bout is expected to serve as the co-main event at UFC Vegas 50.

Moraes revealed that he tested positive for COVID-19 during a training camp in Thailand, raising fears that the fight could be cancelled.

Marlon Moraes has lost 4 of his last 5 UFC fights, including a back-and-forth war against Merab Dvalishvili in his last fight. Despite Moraes almost finishing the fight, Merab rallied to win by stoppage in Round 2.

The Brazilian’s last win was a controversial split decision against Jose Aldo in December 2019. Moraes fought Henry Cejudo for the vacant 135lbs at UFC 238, eventually losing via ground-and-pound in the third round.

Yadong Song stopped Julio Arce in his last fight to put together a win streak. Prior to this, Song earned a split-decision win against Casey Kenney at UFC 265.

Song Yadong sensed the finish and went all out 😳 #UFCVegas42 pic.twitter.com/dLA2EQfK1V

Song’s only defeat in the UFC came against Kyler Phillips in March 2021. He has earned notable wins over Marlon Vera, Vince Morales and Alejandro Perez.

Marlon Moraes is significantly older than his opponent at 33 years old, while Yadong Song is only 24.

Yadong Song has maintained a higher striking output in his UFC career, landing 4.88 significant strikes per minute to Moraes’ 3.34.

Despite his young age, Song has almost as many pro fights as Moraes. Song has fought professionally 25 times, while Moraes has 33 fights.

This is an excellent matchup to make in the UFC Bantamweight Division. Currently ranked #14, Yadong Song is rising up the rankings fast but will face a stern test in Moraes, who has fought the division’s best.

The stakes are huge for both fighters. Song will need to overcome his biggest career test so far in Moraes if he wants to break into the Top 10.

Another defeat for Moraes would leave his position in the Top 15 in doubt. Despite the excitement he brings to the Octagon, four defeats on the trot could even spell the end of his UFC career.

The oddsmakers’ predictions have Yadong Song as the favorite with betting odds of -240.

Get your Marlon Moraes vs Yadong Song picks in.

Where to bet on Marlon Moraes vs Yadong Song

Marlon Moraes vs Yadong Song tale of the tape 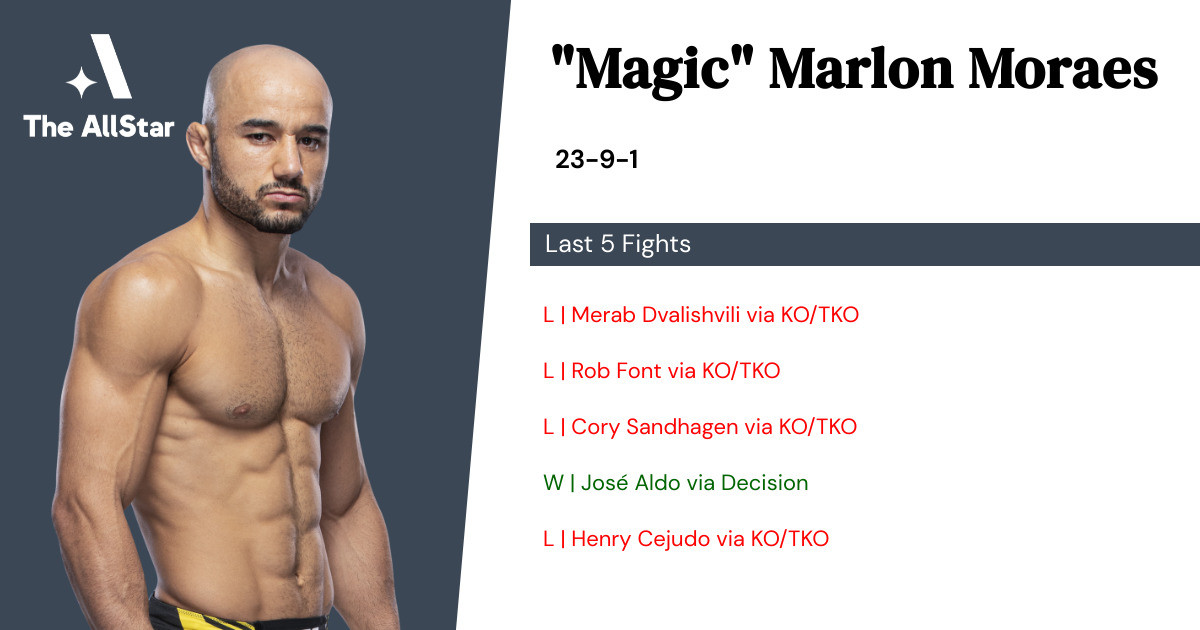 Marlon Moraes has a 70% finish rate, including 10 by knockout, 6 by submission, 7 by decision.

Marlon Moraes is currently on a 3 fight losing skid. 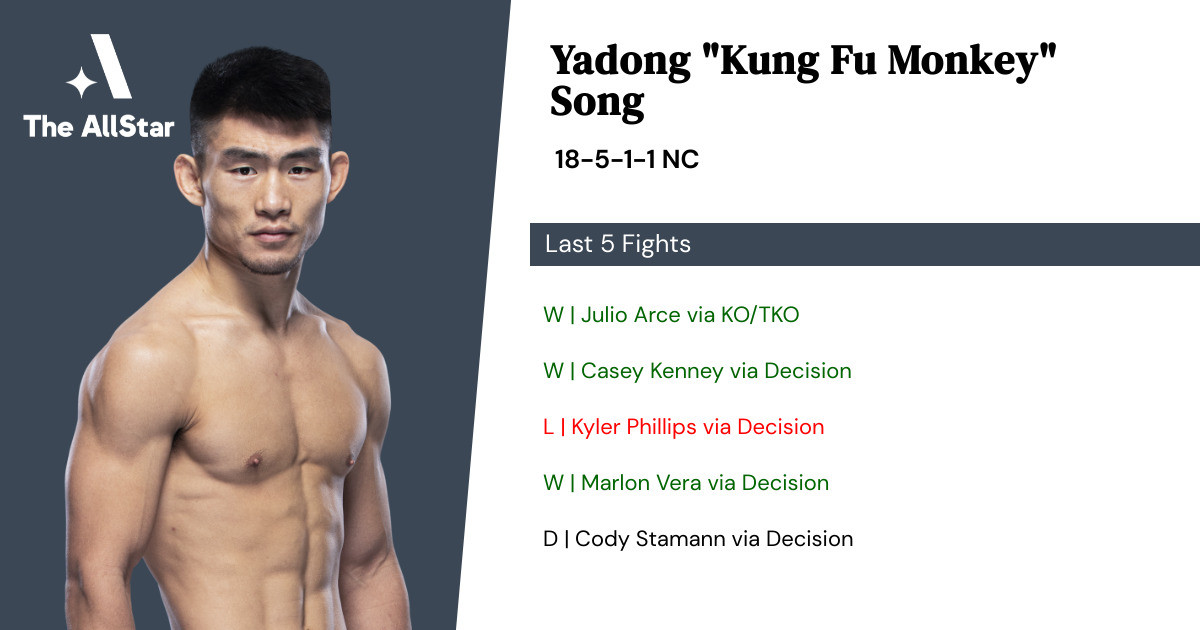 Yadong Song has a 56% finish rate, including 7 by knockout, 3 by submission, 8 by decision.

Marlon Moraes vs Yadong Song is set to go down at UFC Fight Night – Santos vs. Ankalaev. The fight is expected to start at around 11:00pm EST on Saturday 12th March 2022.

ESPN+ is the best option to live stream Marlon Moraes vs Yadong Song if you live in the United States. Outside of the USA, the best option is to register for UFC Fight Pass.

Where can I get the best odds for the Marlon Moraes vs Yadong Song UFC fight?

Use the AllStar’s directory to find the best sportsbooks and recommendations on where to place UFC bets online. If you just want to play for fun, head over to to our Fantasy UFC picks app to make your fight predictions for Marlon Moraes vs Yadong Song totally FREE.