Mike Grundy vs Makwan Amirkhani is set to go down at UFC Fight Night: Volkov vs. Aspinall at 7:30pm EST on Saturday 19th March 2022 in a 145lbs matchup.

Mike Grundy has now lost two-in-a-row in the UFC after a split-decision defeat to Lando Vannata at UFC 262.

Makwan Amirkhani is on a three-fight skid, losing his most recent UFC fight to up-and-comer Lerone Murphy.

Mike Grundy opens as the slight favorite with betting odds of -130.

Makwan Amirkhani is the betting underdog with opening odds of +120.

These two fighters were originally booked to fight in London in March 2020 before the entire card was scrapped due to COVID.

Mike Grundy suffered a split-decision loss to Lando Vannata in his last UFC outing in May 2021. Despite the close scorecards, 19 out of 20 major media outlet picks had Vannata as the victor.

Don't call it a comeback!@MGWrestling gave us one heck of a start at #UFCLondon!

Grundy, who trains out of Team Kaobon in Liverpool, won his UFC debut against Nad Narimani by Round 2 knockout.

The Finnish fighter started his UFC career with 5 wins out of 6. However, his current streak has seen him win just once in 5 fights.

Makwan Amirkhani will be the taller fighter at 5”10, while Mike Grundy is 5”7. Despite the difference in height, both fighters have an identical 72-inch reach.

Both fighters have a 75% finishing rate over their careers, with almost all of their finishes coming by way of submission.

This is one of the best matchups on the UFC Fight Night: Volkov vs. Aspinall card, pitting two dangerous grapplers against one another.

Mike Grundy has elite wrestling and a powerful top game, which will be countered by Amirkhani’s slick submission skills.

The stakes are huge for both men, who may be fighting for their UFC futures. A loss for either fighter could be their last in the promotion.

The oddsmakers’ predictions see Mike Grundy as the small favorite with betting odds of -130.

Grundy spoke exclusively to The AllStar and made his predictions:

“Amirkhani gets tired. With my pressure, I think he’s going to struggle.”

Get your Mike Grundy vs Makwan Amirkhani picks in.

Where to bet on Mike Grundy vs Makwan Amirkhani

Mike Grundy vs Makwan Amirkhani tale of the tape 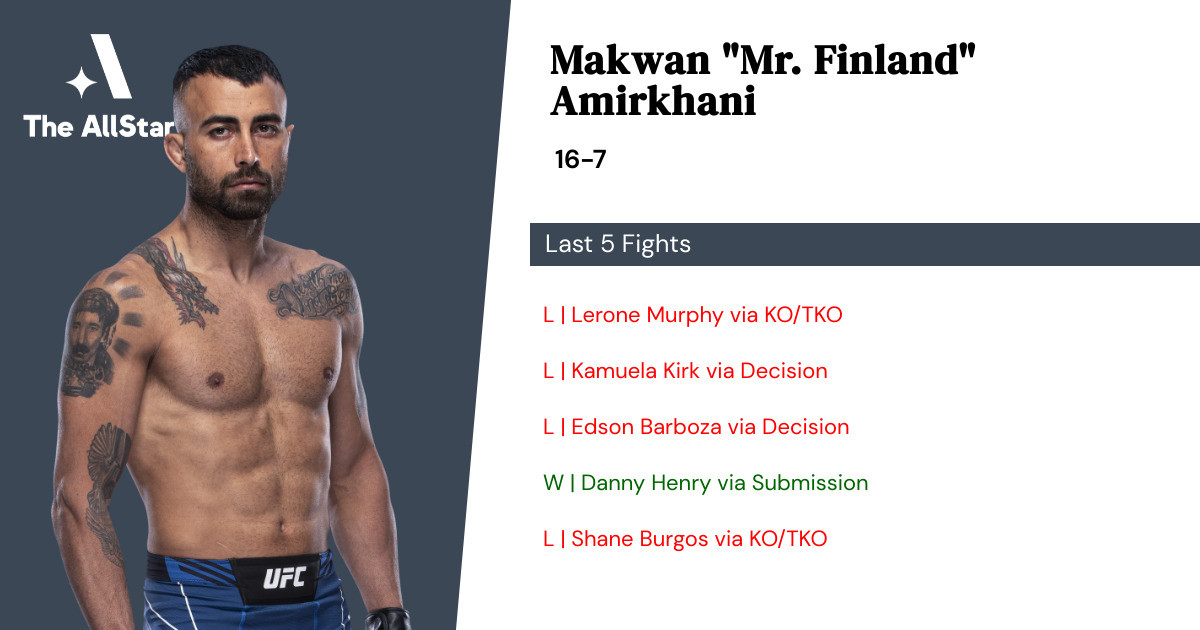 Makwan Amirkhani has a 75% finish rate, including 1 by knockout, 11 by submission, 4 by decision.

Makwan Amirkhani is currently on a 3 fight losing skid. 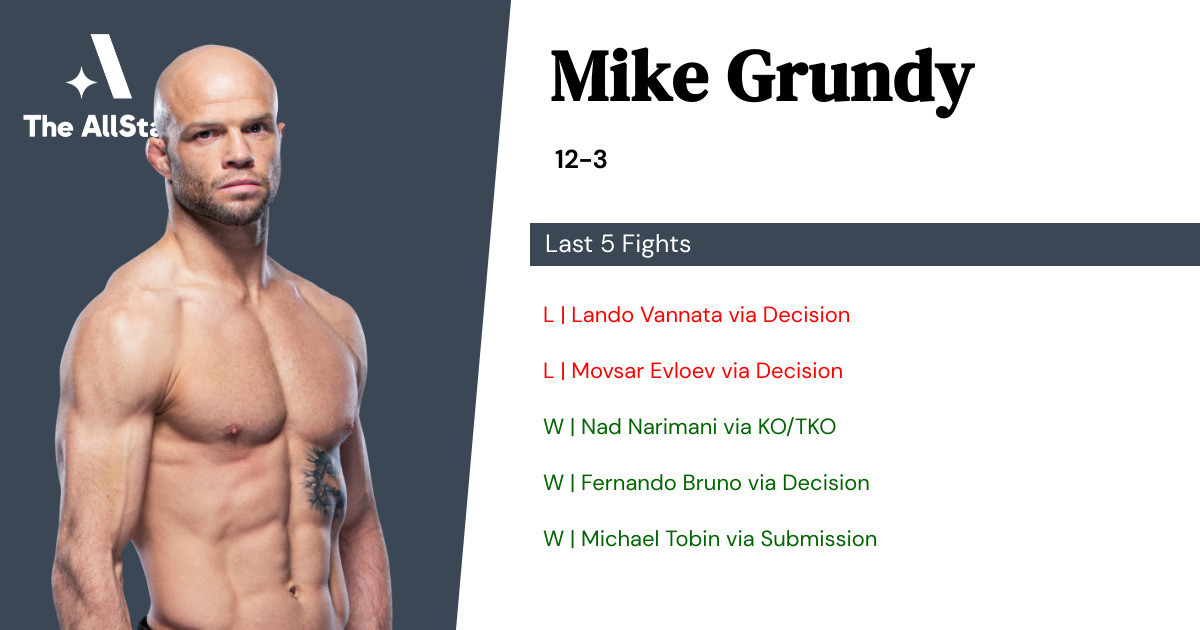 Mike Grundy has a 75% finish rate, including 1 by knockout, 8 by submission, 3 by decision.

Mike Grundy is currently on a 2 fight losing skid.

Mike Grundy vs Makwan Amirkhani is set to go down at UFC Fight Night – UFC Fight Night. The fight is expected to start at around 7:30pm EST on Saturday 19th March 2022.

ESPN+ is the best option to live stream Mike Grundy vs Makwan Amirkhani if you live in the United States. Outside of the USA, the best option is to register for UFC Fight Pass.

Where can I get the best odds for the Mike Grundy vs Makwan Amirkhani UFC fight?

Use the AllStar’s directory to find the best sportsbooks and recommendations on where to place UFC bets online. If you just want to play for fun, head over to to our Fantasy UFC picks app to make your fight predictions for Mike Grundy vs Makwan Amirkhani totally FREE.