Trevin Jones vs Javid Basharat is set to go down at UFC Fight Night: Santos vs. Ankalaev at 8:30pm EST on Saturday 12th March 2022 in a 135lbs matchup.

Javid Basharat opens as the favorite with betting odds of -150.

Trevin Jones is the betting underdog with opening odds of +135.

Trevin Jones suffered his first UFC loss in his last fight, losing by guillotine to Saidyokub Kakhramonov with just 21 seconds left on the clock.

TREVIN JONES WITH A STUNNING UPSET!

📺 Tune in on #ESPNPlus pic.twitter.com/nUbdfC9RhV

Jones impressed in his previous fight against Mario Bautista, stopping the Brazilian with sharp hands in Round 2.

Closing out the dominate performance with a 3️⃣rd round submission 💪

Basharat has never lost as an MMA pro and maintains a 100% finishing rate. He is as proficient with his hands as he is with the submissions.

Although Javid Basharat is 5”9 and Trevin Jones is 5”7, Jones will have the 1-inch reach advantage in this fight.

Jones has had almost twice the professional fights of his opponent. He is also 5 years older than Basharat at 31, while his opponent is 26 years old.

Both of these fighters have very bright futures in the UFC. Despite his recent loss, Trevin Jones finished his two previous UFC opponents via knockout.

Gorgeous ground and pound from @JavidBasharat 👊

Javid Basharat is an extremely dangerous fighter who has finished every single opponent put in front of him. With 6 submissions and 5 knockouts, he can end the fight anywhere.

Trevin Jones is looking to bounce back from his first UFC loss, while Basharat is making his promotional debut. The stakes are high for both fighters.

The oddsmakers’ predictions have Javid Basharat as the slight favorite with betting odds of -150.

Jones predicts he will take Basharat’s undefeated record from him:

Get your Trevin Jones vs Javid Basharat picks in.

Where to bet on Trevin Jones vs Javid Basharat

Trevin Jones vs Javid Basharat tale of the tape 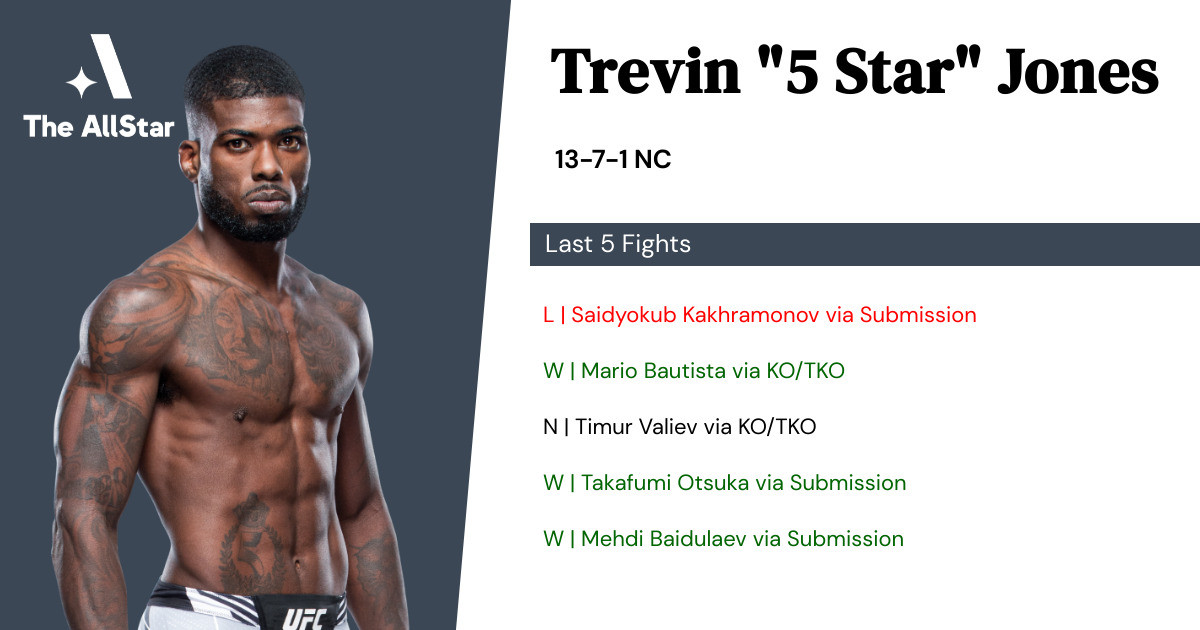 Trevin Jones has a 54% finish rate, including 3 by knockout, 4 by submission, 6 by decision.

Trevin Jones is looking to get back to winning ways after a loss at the hands of Saidyokub Kakhramonov at UFC Fight Night: Cannonier vs. Gastelum.

Trevin Jones vs Javid Basharat is set to go down at UFC Fight Night – Santos vs. Ankalaev. The fight is expected to start at around 8:30pm EST on Saturday 12th March 2022.

ESPN+ is the best option to live stream Trevin Jones vs Javid Basharat if you live in the United States. Outside of the USA, the best option is to register for UFC Fight Pass.

Where can I get the best odds for the Trevin Jones vs Javid Basharat UFC fight?

Use the AllStar’s directory to find the best sportsbooks and recommendations on where to place UFC bets online. If you just want to play for fun, head over to to our Fantasy UFC picks app to make your fight predictions for Trevin Jones vs Javid Basharat totally FREE.