William Knight has gone 3-1 in the UFC since his first-round knockout on Dana White’s Contender Series earned him a contract in the promotion. He recently beat Alonzo Menifield to extend his active winning streak to 2.

Maxim Grishin lost a unanimous decision to Dustin Jacoby in his last Octagon outing in February 2021. Grishin is 1-2 in the UFC, with his sole win coming against Gadzhimurad Antigulov via second-round TKO.

Check with the AllStar for the latest betting odds.

William Knight has stepped up on short notice to take on Maxim Grishin. Initially, Ed Herman was scheduled to face Grishin as announced by MMA Junkie on November 12th, 2021.

However, Herman backed out for unknown reasons and the UFC rebooked the fight. Knight vs Grishin was announced on January 29th, 2022, two weeks before UFC 271.

William Knight is a Contender Series graduate who has won 3 out of 4 during his time in the UFC. He won his last fight against Alonzo Menifield by unanimous decision, although 13 out of 13 major media picks had Menifield winning the fight.

The Knightmare is ALIVE AND WELL 🤯🤯🤯 @Knightmare205 #UFCVegas34 pic.twitter.com/NJExLh6sB7

Knight won a Performance of the Night bonus in August 2021 after a first-round knockout victory over Fabio Cherant. Knight fought twice on the Contender Series before earning his contract, winning both bouts via KO/TKO.

MMA veteran Maxim Grishin finally earned his shot in the UFC at the age of 35. In his debut, he lost a Heavyweight matchup against Marcin Tybura before notching up his first UFC victory with a TKO win against Gadzhimurad Antigulov.

🇷🇺 Maxim Grishin with a late shower of shots to close the fight.

Grishin made the drop down to Light-Heavyweight for his last fight against Dustin Jacoby, although he missed weight and fought at Catchweight. Grishin will again be dropping to 205lbs for the fight against Knight.

Maxim Grishin is the significantly taller fighter at 6”3 compared to Knight who is 5”10. With a 76-inch reach, Grishin will have a 3-inch advantage over Knight’s 73-inch reach.

Grishin is also more experienced in the sport, with a total of 42 professional fights. Knight has fought professionally 13 times.

William Knight is extremely explosive and capable of knocking his opponent out at any moment. He has an 82% finishing rate with 10 knockouts on his record.

William Knight is one of the pound-for-pound strongest people on the UFC roster, by the way. His weight-room feats are legendary in New England, per @TysonChartier. Knight once did 47 reps of 225 pounds in bench press.

Maxim Grishin is one of the more seasoned veterans in the sport with 42 pro fights. He also has a relatively high finishing rate of 71%, with 16 knockouts and 6 submissions.

A victory for William Knight could help him break into the Top 15. Already 3-1 in the UFC, victory would almost certainly lead to a ranked opponent next.

Maxim Grishin is on more precarious ground in his UFC career. Another loss and he could find his position in the promotion under threat.

Get your William Knight vs Maxim Grishin picks in.

Where to bet on William Knight vs Maxim Grishin

William Knight vs Maxim Grishin tale of the tape 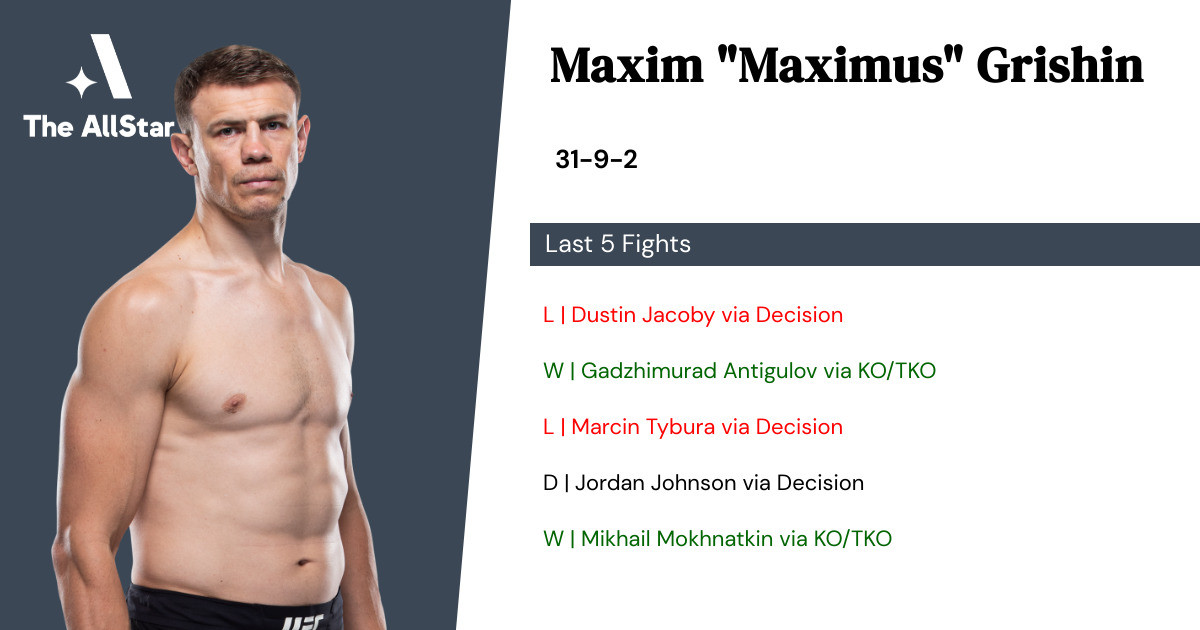 Maxim Grishin has a 71% finish rate, including 16 by knockout, 6 by submission, 9 by decision.

Maxim Grishin is looking to get back to winning ways after a loss at the hands of Dustin Jacoby at UFC Fight Night: Rozenstruik vs. Gane. 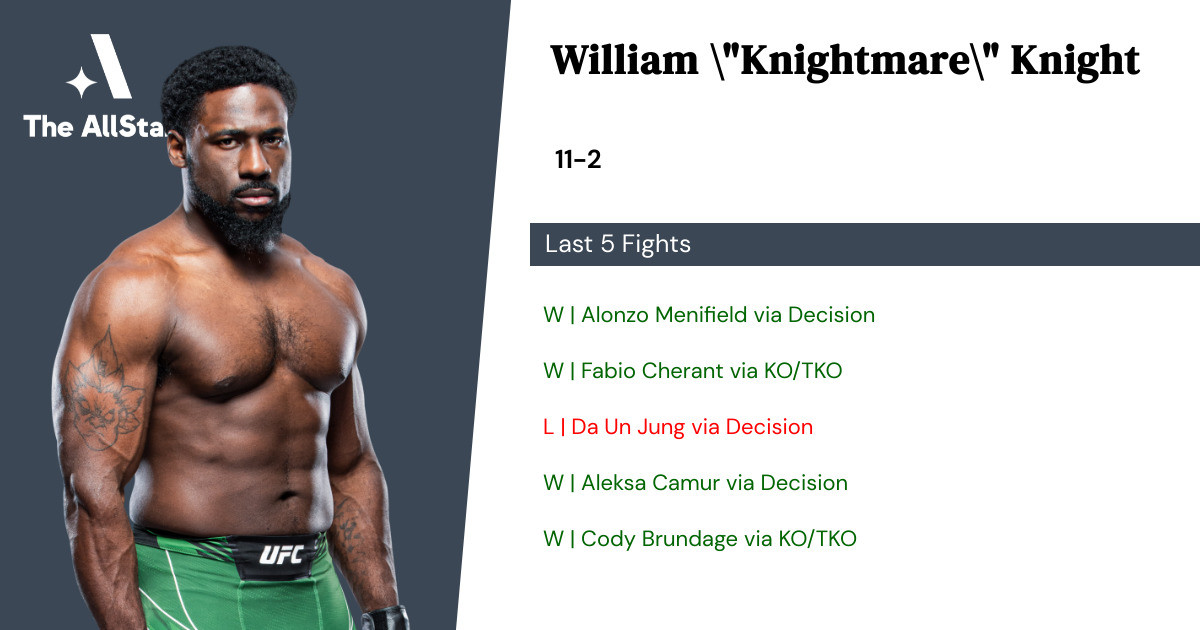 William Knight has a 82% finish rate, including 8 by knockout, 1 by submission, 2 by decision.

William Knight vs Maxim Grishin is set to go down at UFC 271 – Adesanya vs. Whittaker 2. The fight is expected to start at around 5:00pm EST on Saturday 12th February 2022.

ESPN+ is the best option to live stream William Knight vs Maxim Grishin if you live in the United States. Outside of the USA, the best option is to register for UFC Fight Pass.

Where can I get the best odds for the William Knight vs Maxim Grishin UFC fight?

Use the AllStar’s directory to find the best sportsbooks and recommendations on where to place UFC bets online. If you just want to play for fun, head over to to our Fantasy UFC picks app to make your fight predictions for William Knight vs Maxim Grishin totally FREE.