Augusto “Tanquinho” Mendes is a 39 year old Male fighter from Brazil with a 6-3-0 pro MMA record. Mendes is scheduled to fight Javier Garcia at Freedom Fight Night 3 on Friday November 4, 2022 in a Featherweight bout.

Augusto Mendes has 6 wins with a 84% finish rate, including 1 by knockout, 4 by submission, 1 by decision.

Augusto Mendes is currently on a 2 fight losing skid. 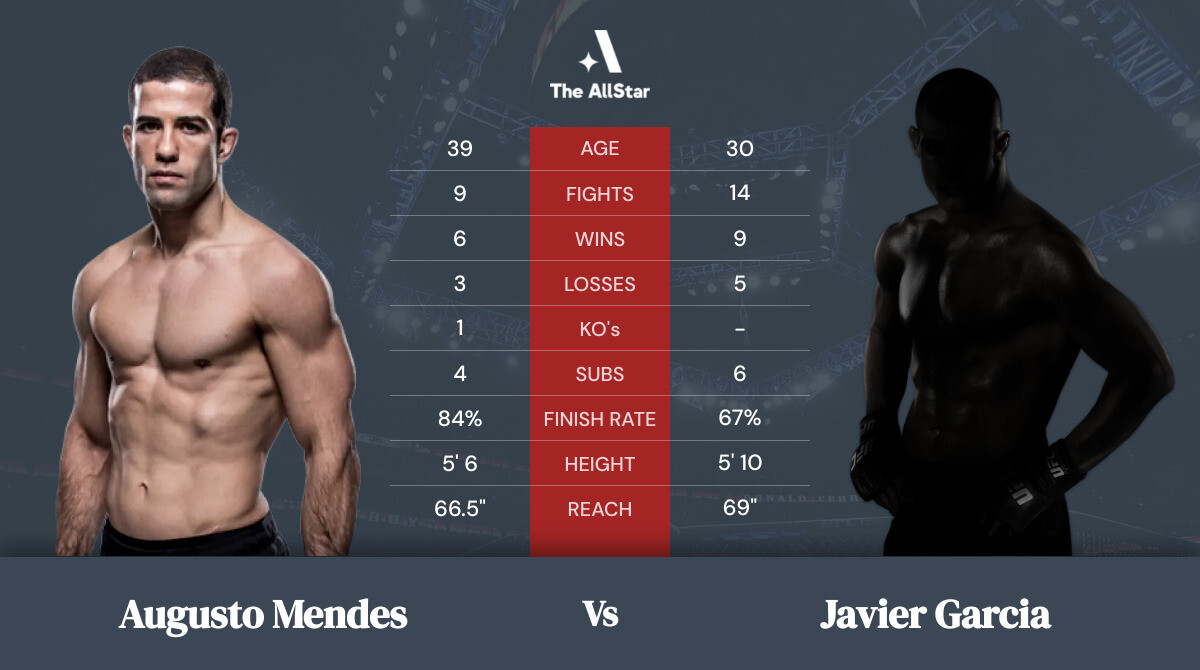 Mendes made his professional debut against Xavier Ramirez on April 5, 2014, fighting on the regional circuit.

He made a winning start to his career, defeating Xavier Ramirez who carried a 0-1-0 professional MMA record into the fight.

Augusto Mendes beat Xavier Ramirez by Submission at 1:30 of Round 1.

Mendes made his debut in the UFC against Cody Garbrandt on February 21, 2016, fighting on the main card of UFC Fight Night 83: Cowboy vs. Cowboy having compiled a 5-0-0 professional MMA record.

Augusto Mendes lost to Cody Garbrandt by KO/TKO at 4:18 of Round 1.

Since his debut, Mendes has gone on to fight a total of 3 more times in the UFC. His UFC record stands at 1-2-0.

After his UFC stint, Mendes took his next fight at ACA on June 8, 2019, fighting against Igor Zhirkov on the main card of ACA 96: Lodz.

Augusto Mendes lost to Igor Zhirkov by Decision at 5:00 of Round 3.

When was Augusto Mendes's last win?

Mendes's last win came against Frankie Saenz at UFC Fight Night 103 on Sunday January 15, 2017. Augusto Mendes beat Frankie Saenz by Decision at 5:00 of Round 3. Both fighters earned a post-fight bonus, after the bout was awarded Fight of the Night.

Who is Augusto Mendes's next opponent?

When was Augusto Mendes's last loss?

Mendes's last loss came against Igor Zhirkov at ACA 96 on Saturday June 8, 2019. Augusto Mendes lost to Igor Zhirkov by Decision at 5:00 of Round 3.

How many UFC fights has Augusto Mendes had?

How many pro MMA knockouts does Augusto Mendes have?

Mendes has knocked out 1 opponents.

How many pro MMA submissions does Augusto Mendes have?

How many times has Augusto Mendes been knocked out?

Mendes has been knocked out 1 times.

How many times has Augusto Mendes been submitted?

Mendes has never been submitted.