“Lucky” Lauren Murphy is a 39 year old Female fighter from United States with a 16-5-0 pro MMA record. Murphy is scheduled to fight Jéssica Andrade at UFC 283 on Saturday January 21, 2023 in a Flyweight bout.

Lauren Murphy has 16 wins with a 57% finish rate, including 8 by knockout, 1 by submission, 7 by decision. 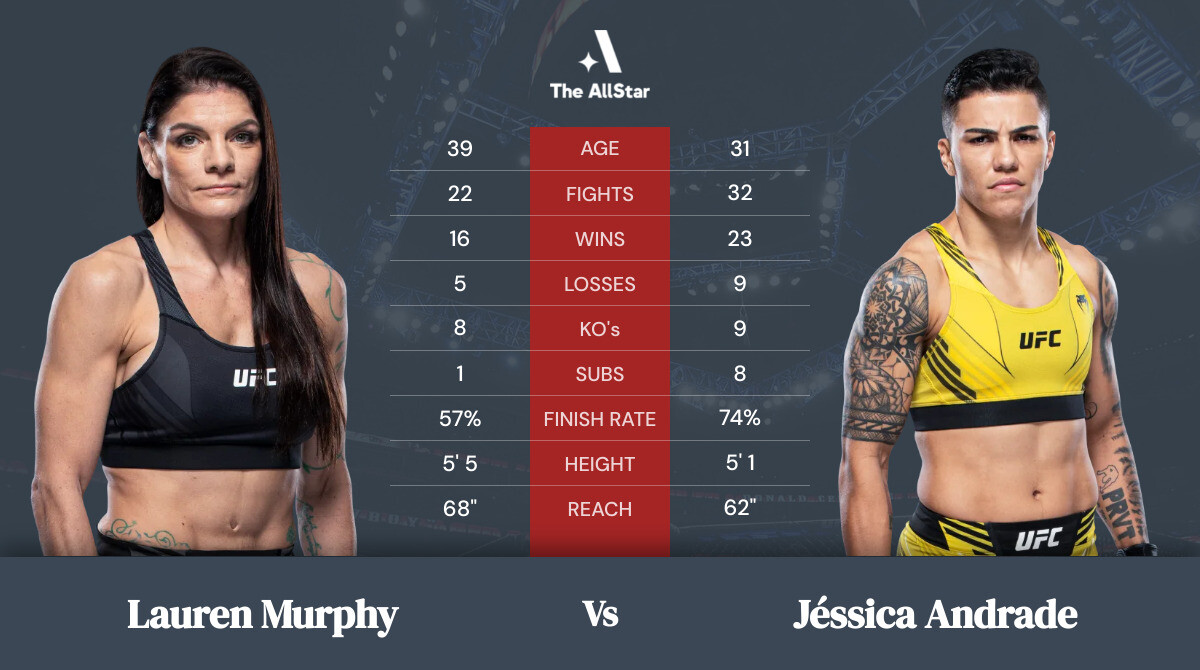 Murphy made her professional debut against Kloiah Wayland on June 9, 2010, fighting on the regional circuit.

She made a winning start to her career, defeating Kloiah Wayland who carried a 1-1-0 professional MMA record into the fight.

Lauren Murphy beat Kloiah Wayland by KO/TKO at 0:17 of Round 1.

Murphy made her debut in the UFC against Sara McMann on August 16, 2014, fighting on the preliminary card of UFC Fight Night 47: Bader vs. St. Preux having compiled a 8-0-0 professional MMA record.

Lauren Murphy lost to Sara McMann by Decision at 5:00 of Round 3.

Since her debut, Murphy has gone on to fight a total of 13 more times in the UFC. Her UFC record stands at 8-5-0.

After her UFC stint, Murphy took her next fight at TUF on July 27, 2017, fighting against Nicco Montaño on the main card of The Ultimate Fighter Season 26: A New World Champion.

Lauren Murphy lost to Nicco Montaño by Decision at 5:00 of Round 2.

After 1 fights outside of the promotion, Murphy returned to the UFC on December 1, 2017, fighting against Barb Honchak on the main card of The Ultimate Fighter 26 Finale.

At the time of her UFC return, her professional MMA record stood at 9-3-0

Lauren Murphy beat Barb Honchak by Decision at 5:00 of Round 3.

Lauren Murphy lost to Valentina Shevchenko by KO/TKO at 4:00 of Round 4.

When was Lauren Murphy's last win?

Murphy's last win came against Miesha Tate at UFC on ABC 3 on Saturday July 16, 2022. Lauren Murphy beat Miesha Tate by Decision at 5:00 of Round 3.

Who is Lauren Murphy's next opponent?

Murphy is scheduled to fight Jéssica Andrade at UFC 283 on Saturday January 21, 2023.

When was Lauren Murphy's last loss?

How many UFC fights has Lauren Murphy had?

How many pro MMA knockouts does Lauren Murphy have?

Murphy has knocked out 8 opponents.

How many pro MMA submissions does Lauren Murphy have?

How many times has Lauren Murphy been knocked out?

Murphy has been knocked out 1 times.

How many times has Lauren Murphy been submitted?

Murphy has never been submitted.