“Magnum” Weili Zhang is a 33 year old Female fighter from China with a 22-3-0 pro MMA record. Zhang is scheduled to fight Carla Esparza at UFC 281 on Saturday November 12, 2022 in a Strawweight bout. 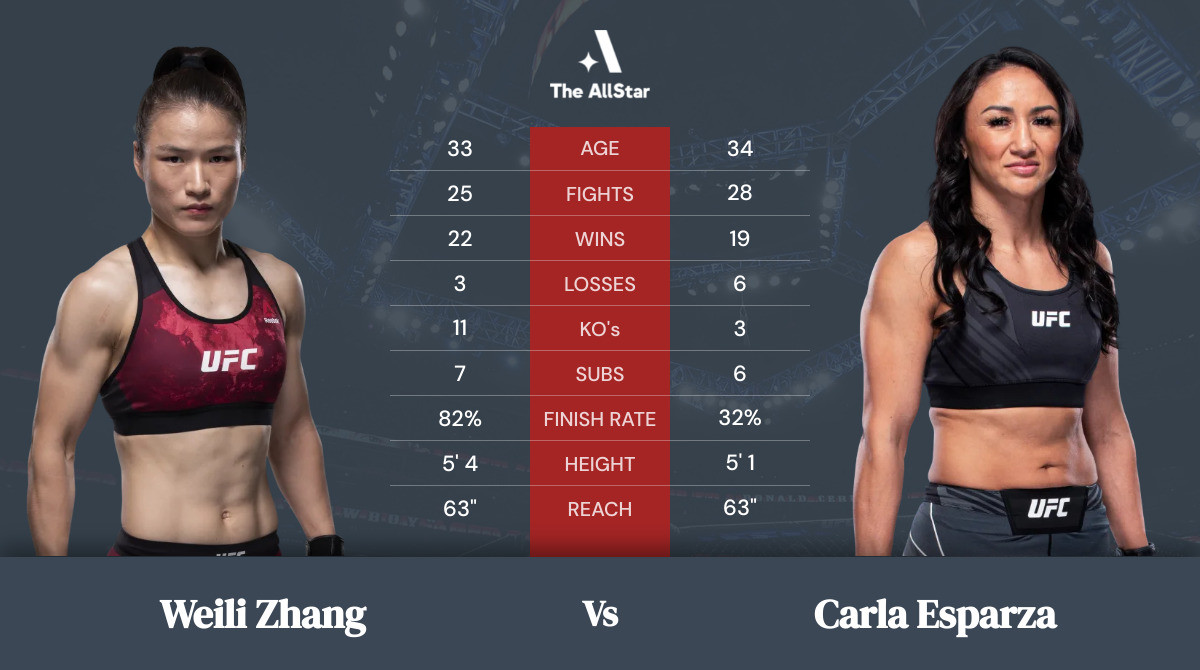 Zhang made her professional debut against Bo Meng on November 9, 2013, fighting on the main card of China MMA League.

She lost her first MMA fight, losing to Bo Meng who carried a 0-0-0 professional MMA record into the fight.

Zhang made her debut in the UFC against Danielle Taylor on August 4, 2018, fighting on the preliminary card of UFC 227: Dillashaw vs. Garbrandt 2 having compiled a 16-1-0 professional MMA record.

Weili Zhang beat Danielle Taylor by Decision at 5:00 of Round 3.

Since her debut, Zhang has gone on to fight a total of 8 more times in the UFC. Her UFC record stands at 6-2-0.

Weili Zhang beat Jéssica Andrade by KO/TKO at 0:42 of Round 1. Weili Zhang took home an extra bonus after being awarded with Performance of the Night.

Zhang defended her belt against Joanna Jędrzejczyk on March 7, 2020 at UFC 248: Adesanya vs. Romero.

Weili Zhang beat Joanna Jędrzejczyk by Decision at 5:00 of Round 5. Both fighters earned a post-fight bonus, after the bout was awarded Fight of the Night.

Zhang lost her UFC Strawweight title to Rose Namajunas on April 24, 2021 at UFC 261: Usman vs. Masvidal 2 having previously made 1 title defences.

Weili Zhang lost to Rose Namajunas by KO/TKO at 1:18 of Round 1.

Weili Zhang lost to Rose Namajunas by Decision at 5:00 of Round 5.

When was Weili Zhang's last win?

Who is Weili Zhang's next opponent?

When was Weili Zhang's last loss?

Zhang's last loss came against Rose Namajunas at UFC 268 on Saturday November 6, 2021. Weili Zhang lost to Rose Namajunas by Decision at 5:00 of Round 5.

How many UFC fights has Weili Zhang had?

How many pro MMA knockouts does Weili Zhang have?

Zhang has knocked out 11 opponents.

How many pro MMA submissions does Weili Zhang have?

How many times has Weili Zhang been knocked out?

Zhang has been knocked out 1 times.

How many times has Weili Zhang been submitted?

Zhang has never been submitted.