Aljamain Sterling vs Petr Yan is set to go down at UFC 273: Volkanovski vs. Korean Zombie at 11:30pm EST on Saturday 9th April 2022 in a ufc bantamweight championship matchup.

Aljamain Sterling last fought against Petr Yan over a year ago at UFC 259. Sterling won the belt after Yan landed an illegal knee and the fight could not continue.

Petr Yan won the UFC Interim Bantamweight Championship against Cory Sandhagen in October and will now fight Sterling for the second time.

This rematch between Aljamain Sterling vs Petr Yan was first reported on January 5th, with the fight set to take place at UFC 272.

However, the UFC confirmed in early February that Sterling vs Yan 2 will be moved forward to UFC 273.

This will be a five-round co-main event for the UFC Bantamweight Championship.

The rematch was initially booked for UFC 267 in October before Sterling withdrew with a neck injury. Yan fought and beat Cory Sandhagen to be crowned the interim champion.

Aljamain Sterling hasn’t fought in over a year since his title challenge against Petr Yan in March 2021. Sterling won the belt after he suffered an illegal knee in Round 4 and was unable to continue.

“The Funk Master” is riding a six-fight winning streak, including notable victories over Cory Sandhagen and Pedro Munhoz. His last defeat came against Marlon Moraes in 2017.

Petr Yan was crowned the interim Bantamweight champion after a unanimous decision win over Cory Sandhagen at UFC 267.

The Russian won the vacant Bantamweight title against Jose Aldo in July 2020. His disqualification against Sterling is his only loss in the last six years.

Aljamain Sterling is an inch taller than his opponent at 5”7 but will crucially have a 4-inch reach advantage in this fight.

The grappling stats between these two fighters are well-matched. However, in terms of striking, Petr Yan lands more significant strikes per minute at 5.98 compared to Sterling (4.84).

This is the much-anticipated rematch between these two Bantamweight standouts. After their first fight ended in ignominy, fight fans are keen to see who the real 135lbs champ is.

Opinions are divided on how the first fight played out. Sterling outstruck Yan but the Russian’s strikes were more meaningful, with many feeling he would have dominated the final two rounds with ease.

The unified UFC Bantamweight Championship is on the line, so the stakes are as high as they can get.

Aljamain Sterling has the chance to show he truly deserves the belt after winning it via disqualification.

Petr Yan believes he was cruising to a victory before the disqualification and will show his dominance in the rematch.

The oddsmakers’ predictions have Petr Yan as the clear favorite with opening odds of -390.

“My money is on Yan. In the first fight I was kind of expecting Sterling to give him a lot more trouble in the grappling, but Yan shrugged it off. Yan is a killer, he stays real tight, he stays clean, he’s got the mentality.”

Get your Aljamain Sterling vs Petr Yan picks in.

Aljamain Sterling vs Petr Yan tale of the tape 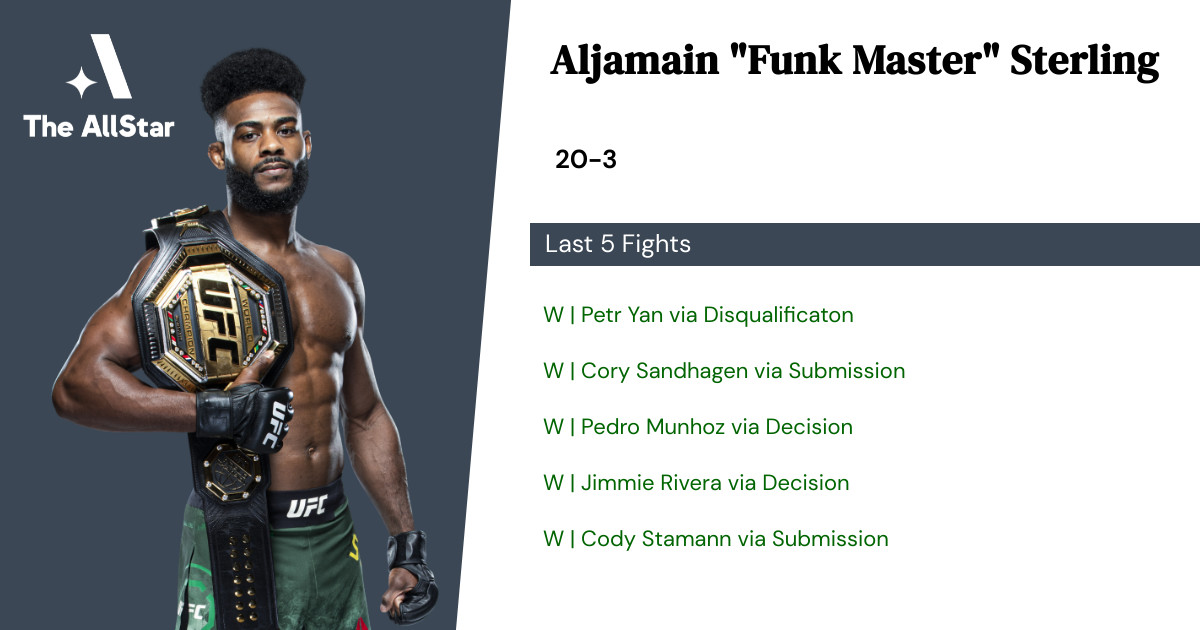 Aljamain Sterling has a 56% finish rate, including 2 by knockout, 8 by submission, 9 by decision. 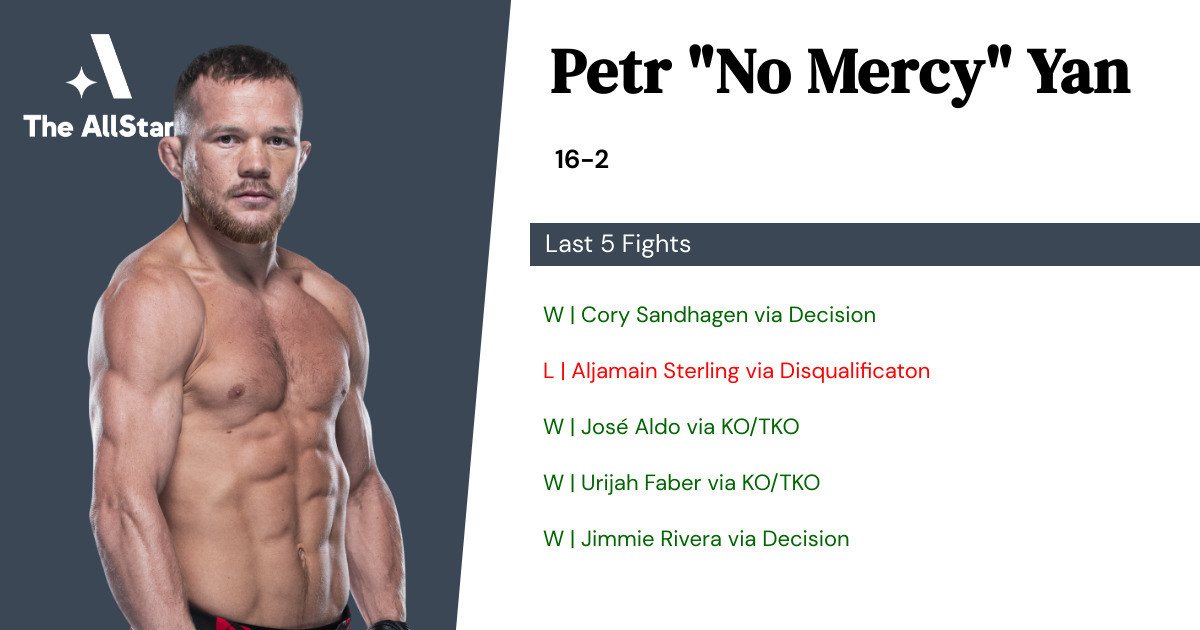 Petr Yan has a 50% finish rate, including 7 by knockout, 1 by submission, 8 by decision.

Petr Yan is looking to put together a winning streak, having last beaten Cory Sandhagen at UFC 267: Błachowicz vs. Teixeira.

Aljamain Sterling vs Petr Yan is set to go down at UFC 273 – Volkanovski vs. Korean Zombie. The fight is expected to start at around 11:30pm EST on Saturday 9th April 2022.

ESPN+ is the best option to live stream Aljamain Sterling vs Petr Yan if you live in the United States. Outside of the USA, the best option is to register for UFC Fight Pass.

Where can I get the best odds for the Aljamain Sterling vs Petr Yan UFC fight?

Use the AllStar’s directory to find the best sportsbooks and recommendations on where to place UFC bets online. If you just want to play for fun, head over to to our Fantasy UFC picks app to make your fight predictions for Aljamain Sterling vs Petr Yan totally FREE.