Amanda Lemos vs Jessica Andrade is set to go down at UFC Fight Night: Lemos vs. Andrade at 11:00pm EST on Saturday 23rd April 2022 in a 115lbs matchup.

Former Strawweight champion Jessica Andrade returns to the 115lbs division on the back of a first-round finish against Cynthia Calvillo.

Jessica Andrade opened as a -180 betting favorite. Placing a bet on Andrade means you would need to bet $180 in order to win $100.

This UFC Strawweight bout will be a five-round main event.

The fight will be Jessica Andrade’s return to the 115lbs division after a run of three fights at 125lbs.

Amanda Lemos has pushed her way into the Top 10 of the UFC Strawweight rankings with a run of five straight victories.

DROPPED WITH A JAB 💥

🇧🇷 Lemos was in control from minute one!

Her last win came via split decision against Angela Hill in December. The Brazilian has finished two of her last three fights in the first round via strikes.

Andrade won the 115lbs belt via slam against current champion Rose Namajunas in 2019. However, she lost her last two fights in the Strawweight division to Weili Zhang and a rematch with Namajunas.

Amanda Lemos will be the taller fighter in this matchup at 5”4 compared to Andrade who is 5”1.

Lemos will also have a significant 3 inch reach advantage over this fight.

Despite being the younger fighter at 30 years old, Andrade has far more professional MMA experience than her opponent with a total of 31 fights to Lemos’ 13.

The stats show that both women bring a well-rounded MMA game, mixing in the strikes with the grappling. Andrade lands 2.90 TD’s per 15 minutes, while Lemos lands 1.31.

This promises to be one of the most exciting women’s fights in the UFC this year. Both of these Brazilians are exceptional strikers who have shown their knockout power in the UFC time and time again.

With a TD defence of 87%, Lemos has a good chance of keeping this one standing. However, with Andrade’s power, she may want to take it to the mat.

The stakes are significant in this UFC Strawweight matchup, pitting #10 vs the former champion.

A win for either of these women is certain to break them into the top five and possibly earn a No.1 contender match up next.

The oddsmakers’ predictions have Jessica Andrade as the favorite in this fight with opening odds of -180.

Get your Amanda Lemos vs Jessica Andrade picks in.

Amanda Lemos vs Jessica Andrade tale of the tape

Both fighters have a record of 1-0 against Hill. 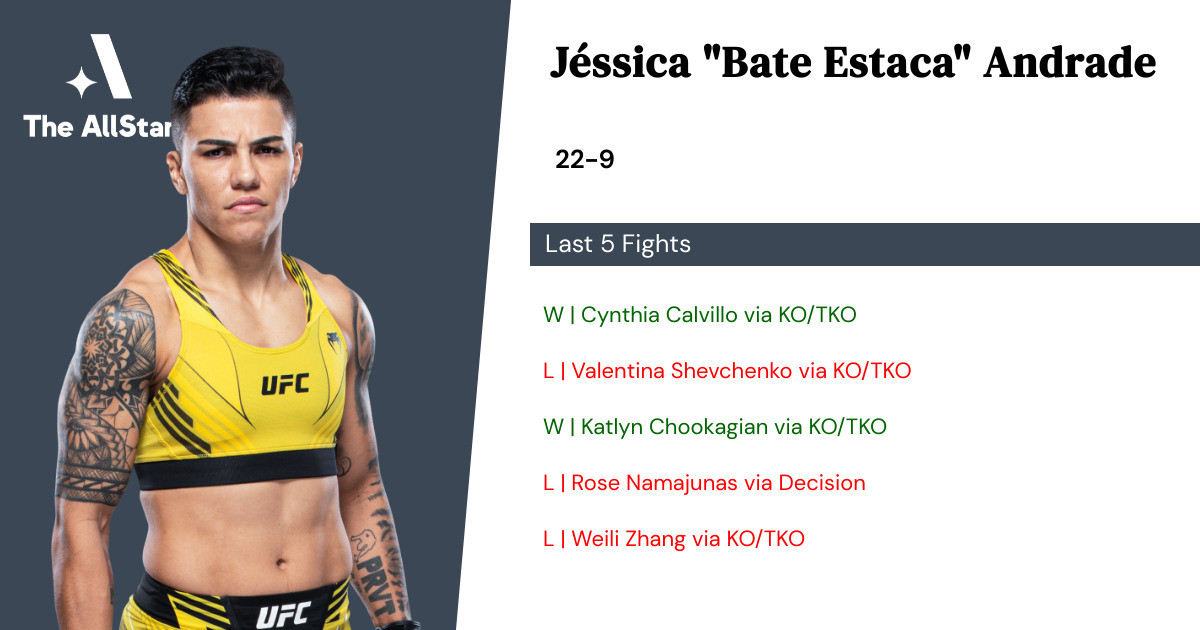 Jéssica Andrade has a 73% finish rate, including 9 by knockout, 7 by submission, 6 by decision.

Jéssica Andrade is looking to put together a winning streak, having last beaten Cynthia Calvillo at UFC 266: Volkanovski vs. Ortega. 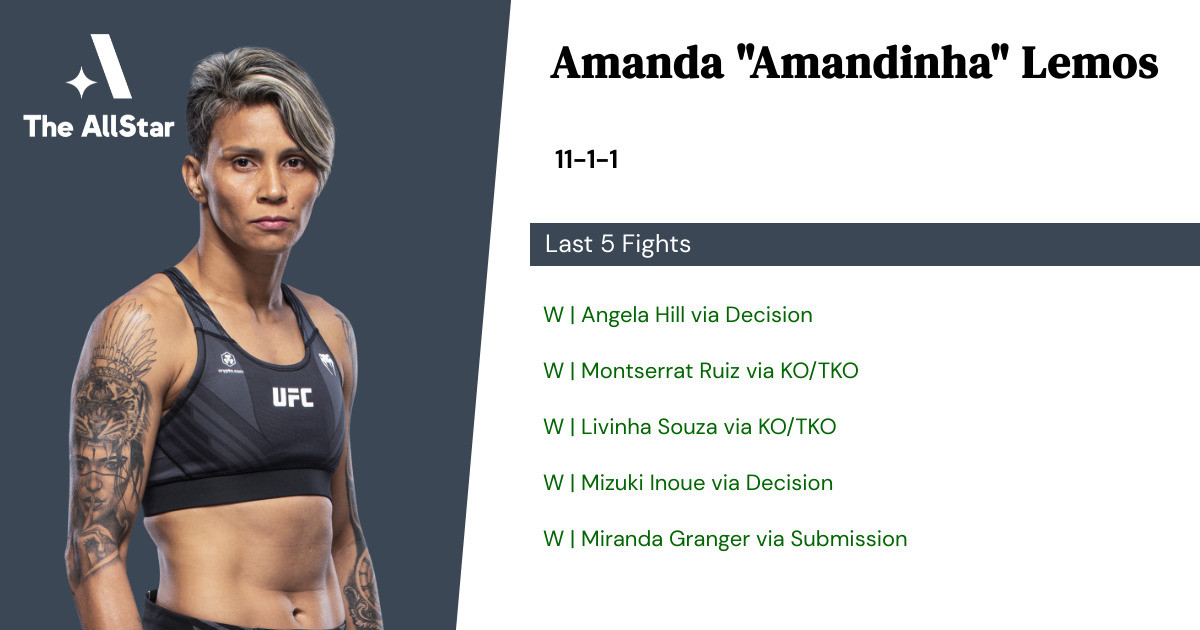 Amanda Lemos has a 82% finish rate, including 7 by knockout, 2 by submission, 2 by decision.

Amanda Lemos vs Jessica Andrade is set to go down at UFC Fight Night – Lemos vs. Andrade. The fight is expected to start at around 11:00pm EST on Saturday 23rd April 2022.

ESPN+ is the best option to live stream Amanda Lemos vs Jessica Andrade if you live in the United States. Outside of the USA, the best option is to register for UFC Fight Pass.

Where can I get the best odds for the Amanda Lemos vs Jessica Andrade UFC fight?

Use the AllStar’s directory to find the best sportsbooks and recommendations on where to place UFC bets online. If you just want to play for fun, head over to to our Fantasy UFC picks app to make your fight predictions for Amanda Lemos vs Jessica Andrade totally FREE.