Veteran Andrei Arlovski will be making his 37th UFC appearance. The former Heavyweight champion has gone 4-1 in his last 5 fights for the promotion, most recently defeating Carlos Felipe by unanimous decision in October 2021.

Jared Vanderaa is 1-2 in his UFC career after earning a contract on Dana White’s Contender Series with a first-round knockout. Vanderaa last fought in October 2021, losing via second-round TKO to undefeated fighter Alexander Romanov.

Andrei Arlovski opened as the heavy betting favorite with odds at -300. Jared Vanderaa on the other hand is the bookmakers’ underdog with opening odds of +250.

Andrei Arlovski vs Jared Vanderaa was a relatively late addition to the UFC 271 card. The fight was announced on January 14th, 2022, less than one month before UFC 271.

According to Vanderaa, he was originally set to fight Chris Barnett in January before Barnett pulled out of the fight.

Andrei Arlovski won his last fight against Carlos Felipe, coasting the first two rounds before surviving a late flurry from the Brazilian.

Since his 29-second KO loss to Jairzinho Rozenstruik at UFC 244, Arlovski has won 4 out of 5, with his sole loss coming against rising Heavyweight Tom Aspinall.

Jared Vanderaa lost via ground-and-pound TKO to dominant grappler Alexander Romanov in his last Octagon outing. Prior to this, he defeated Justin Tafa in May 2021 and earned a Fight of the Night bonus.

Vanderaa is a Contender Series graduate, earning his contract with a vicious first-round knockout against Harry Hunsucker. He told the AllStar that fighting a legend like Arlovski brings him extra motivation in the gym.

Jared Vanderaa will have a 3-inch reach advantage in this one with a reach of 80 inches. He will also be slightly taller at 6”4 compared to Arlovski who is 6”3.

Andrei Arlovski is the vastly more-experienced fighter with 54 pro MMA fights to his name. Vanderaa has had 18 professional fights.

The age gap is also significant between these two fighters. Arlovski is one of the oldest fighters on the UFC roster at 42, while Vanderaa is still relatively young at 29.

Fights pitting the seasoned veteran vs up-and-comer are always a fascinating watch. Arlovski will be making his 37th UFC appearance, one fight shy of Jim Miller’s record of 38 UFC fights.

Vanderaa is a heavy-hitter as seen in his Contender Series appearance. He can also scrap for three rounds after earning a Fight of the Night victory over Carlos Felipe.

Andrei Arlovski will be looking to make it 5 wins out of 6 and push his way into the Top 15. Vandera, who is 1-2 in his UFC career, could be fighting for his place in the promotion.

The bookies’ predictions opened with Andrei Arlovski as the heavy favorite with -300 odds.

Vanderaa spoke to the AllStar and gave his prediction on the fight:

“Arlovski isn’t trying to enter the big brawls. He’s touch, move, let me get some points. I think that’s a smart move.”

Get your Andrei Arlovski vs Jared Vanderaa picks in.

Where to bet on Andrei Arlovski vs Jared Vanderaa

Andrei Arlovski vs Jared Vanderaa tale of the tape 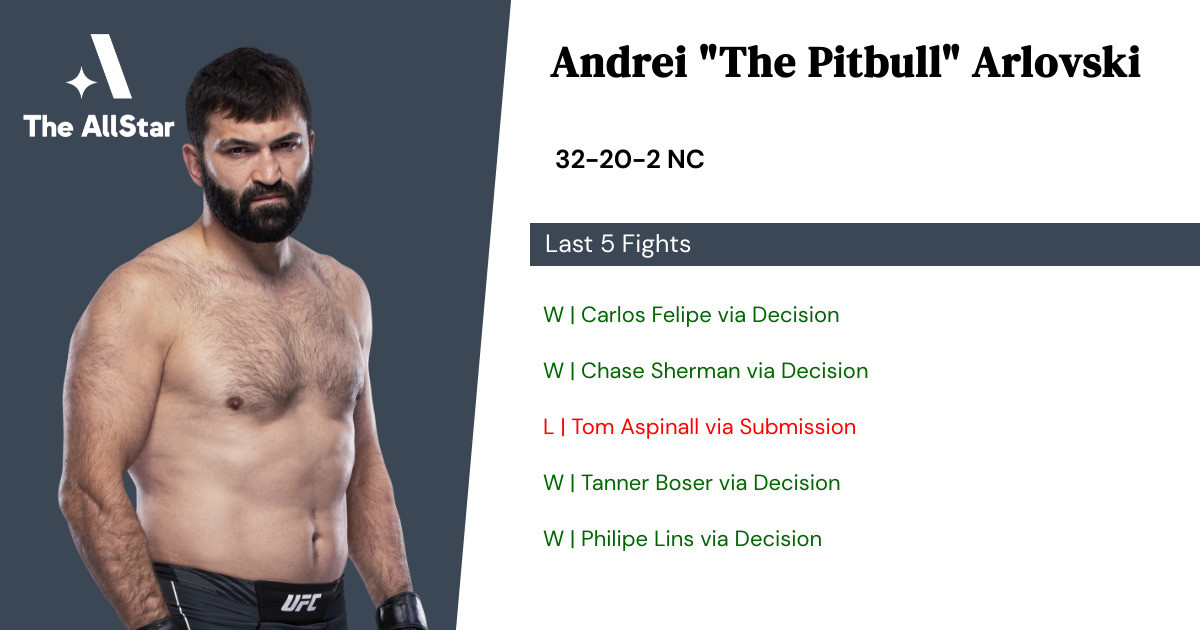 Andrei Arlovski has a 63% finish rate, including 17 by knockout, 3 by submission, 12 by decision. 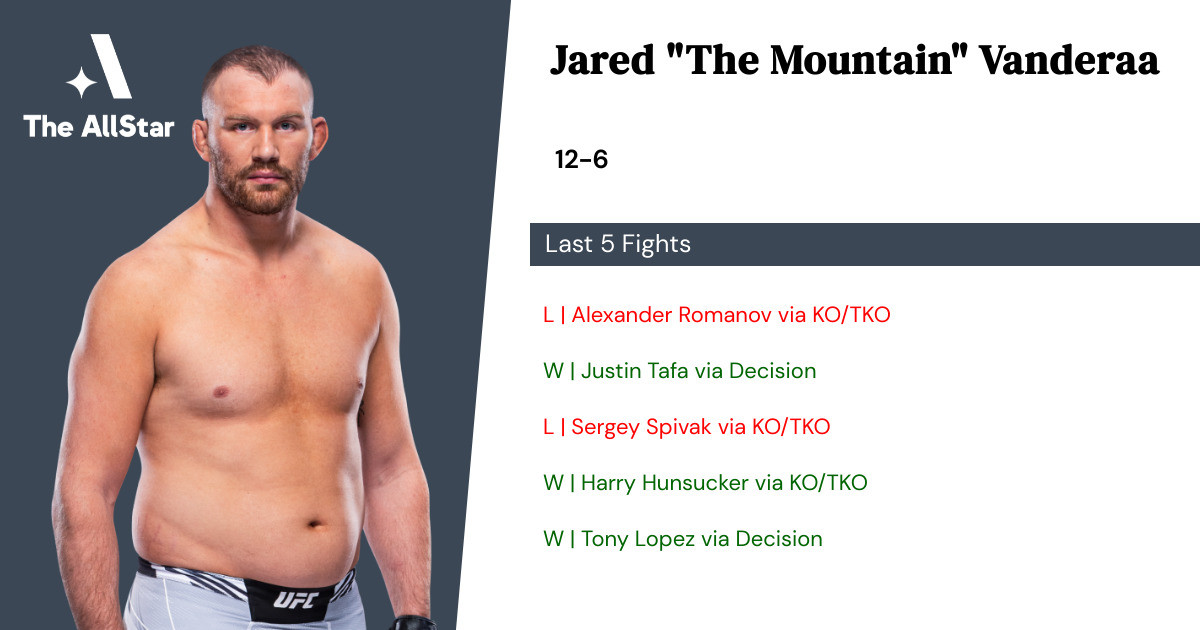 Jared Vanderaa has a 84% finish rate, including 7 by knockout, 3 by submission, 2 by decision.

Jared Vanderaa is looking to get back to winning ways after a loss at the hands of Alexander Romanov at UFC Fight Night: Dern vs. Rodriguez.

Andrei Arlovski vs Jared Vanderaa is set to go down at UFC 271 – Adesanya vs. Whittaker 2. The fight is expected to start at around 5:00pm EST on Saturday 12th February 2022.

ESPN+ is the best option to live stream Andrei Arlovski vs Jared Vanderaa if you live in the United States. Outside of the USA, the best option is to register for UFC Fight Pass.

Where can I get the best odds for the Andrei Arlovski vs Jared Vanderaa UFC fight?