Brandon Royval returned to the win column with a split decision victory over Rogerio Bontorin in January.

Brandon Royval will be the betting favorite with opening odds of -260.

Matt Schnell is the betting underdog with opening odds of +225.

This fight is expected to take place on the prelims of UFC 274.

Brandon Royval bounced back from a run of two defeats with a narrow victory over Rogerio Bontorin. While the judge’s scorecards were split, most major media outlet picks had Royval winning.

How'd you score it? 🤔 #UFCVegas46 pic.twitter.com/OXZKHzgNHH

Royval entered the fight following consecutive stoppage defeats to Brandon Moreno and Alexandre Pantoja. He is now 3-2 in the UFC since making his debut in May 2020.

Matt Schnell dropped a unanimous decision to Rogerio Bontorin in his last Octagon appearance, with all three judges and every major media outlet pick siding with Bontorin.

Schnell has won five of his last seven UFC fights after losing his first two fights in the promotion. His most recent victory came in January 2021 against Tyson Nam.

Brandon Royal is just an inch taller than Matt Schnell, although Schnell will have a slight reach advantage in this matchup.

The stats show how much a threat both men are in the grappling department. Royval attempts 2.2 submissions per 15 minutes to Schnell’s 1.0

This Top 10 UFC Flyweight matchup promises to be one of the most high-level fights on the entire UFC 274 card.

Brandon Royval’s rangy frame and unconventional style make him a danger at every second. Both fighters pose a big threat in the submission department, so it’s anyone’s guess whether this fight hits the mat or stays on the feet.

The winner of this matchup is likely to break into the top five of the UFC Flyweight rankings. While both fighters are coming off the back of defeats, a couple of wins on the trot would put them into title contention.

The oddsmakers’ predictions have Brandon Royval as the clear favorite with opening betting odds of -260.

Get your Brandon Royval vs Matt Schnell picks in.

Brandon Royval vs Matt Schnell tale of the tape

Brandon Royval has the better record against the shared opposition, at 2-1 to Matt Schnell’s record of 0-3 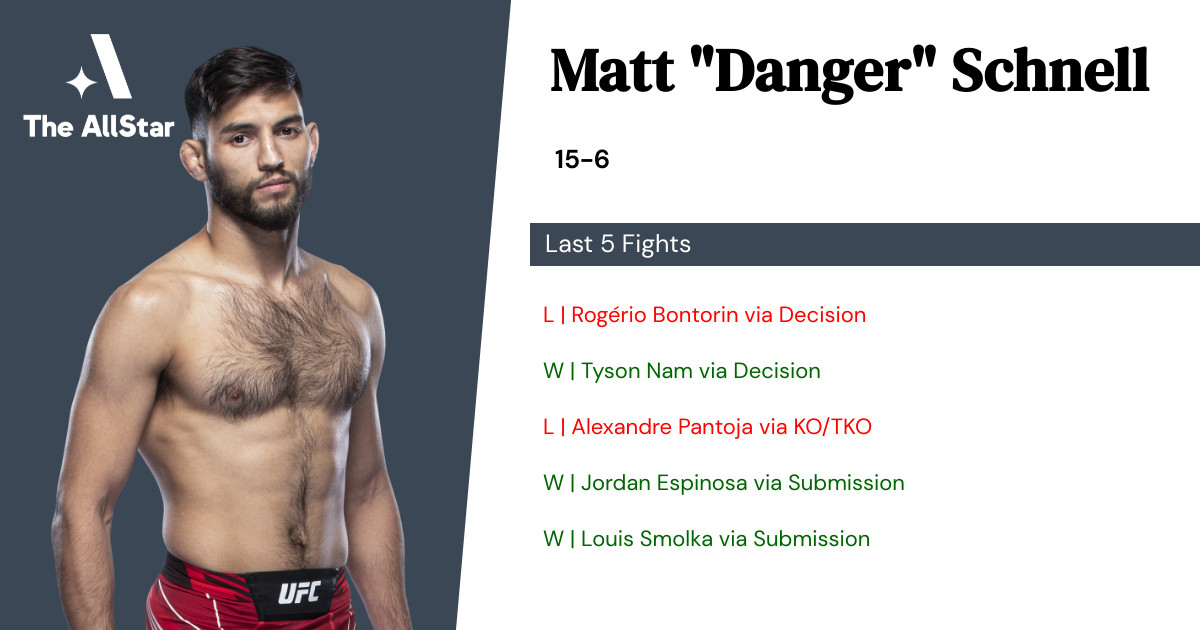 Matt Schnell has a 74% finish rate, including 2 by knockout, 9 by submission, 4 by decision.

Matt Schnell is looking to get back to winning ways after a loss at the hands of Rogério Bontorin at UFC 262: Oliveira vs. Chandler. 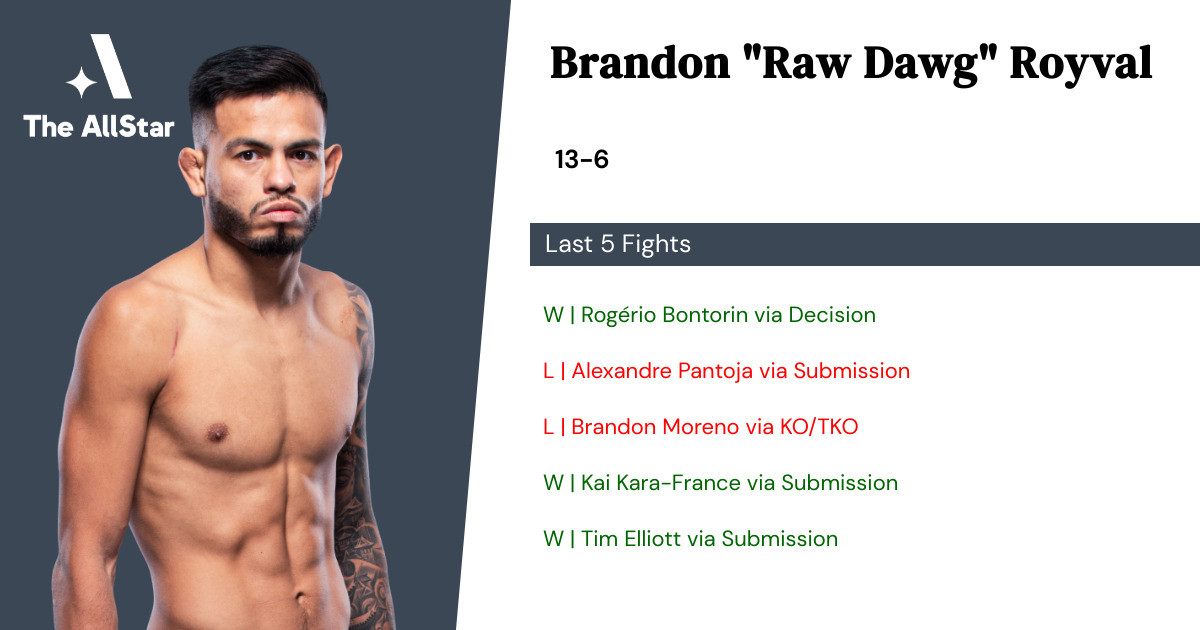 Brandon Royval has a 85% finish rate, including 3 by knockout, 8 by submission, 2 by decision.

Brandon Royval is looking to put together a winning streak, having last beaten Rogério Bontorin at UFC Fight Night: Kattar vs. Chikadze.

Brandon Royval vs Matt Schnell is set to go down at UFC 274 – Oliveira vs. Gaethje. The fight is expected to start at around 7:00pm EST on Saturday 7th May 2022.

ESPN+ is the best option to live stream Brandon Royval vs Matt Schnell if you live in the United States. Outside of the USA, the best option is to register for UFC Fight Pass.

Where can I get the best odds for the Brandon Royval vs Matt Schnell UFC fight?

Use the AllStar’s directory to find the best sportsbooks and recommendations on where to place UFC bets online. If you just want to play for fun, head over to to our Fantasy UFC picks app to make your fight predictions for Brandon Royval vs Matt Schnell totally FREE.