Josh Emmett extended his winning streak to four fights with a unanimous decision victory over Dan Ige in December.

Calvin Kattar will be the betting favorite with opening odds of -235.

Josh Emmett is the betting underdog with opening odds of +205.

This fight will serve as the five-round main event at UFC on ESPN 37 on June 18th.

Calvin Kattar bounced back from his brutal defeat to Max Holloway with a sensational performance against rising star Giga Chikadze.

THAT's HOW YOU MAKE A STATEMENT 💥

Kattar has now won three of his last four fights, including a knockout victory over Jeremy Stephens and a win over Dan Ige.

Josh Emmett returned from an 18-month layoff with an impressive display against Dan Ige, winning the fight on all three judges’ scorecards.

Emmett has won four in a row since his vicious knockout defeat to Jeremy Stephens in 2018. The Californian has now triumphed in 6 of his last 7 fights.

Calvin Kattar will be a lot taller than his opponent in this matchup. The Boston native is 5”11, while Emmett is just 5”6.

Kattar will also have a 2-inch reach advantage in this fight.

Although Josh Emmett is the older fighter at 37, he has fewer pro fights on his record than the experienced Kattar.

The stats show that Kattar lands at a greater rate than Emmett with 5.19 significant strikes per minute to 4.28.

This is a fantastic matchup between two top contenders in the UFC Featherweight Division.

Josh Emmett boasts perhaps the most dangerous knockout power in the division, as he showed with knockouts against Ricardo Lamas, Michael Johnson and Mirsad Bektic.

Calvin Kattar is more of a volume-puncher who smothers his opponents with elite boxing. However, with four of his last six wins coming by knockout, Kattar is dangerous at any moment.

Either one of these fighters could stake their claim to a shot at the belt or a No.1 contender matchup next.

This bout matches up #4 vs #7 in the 145lbs division. With other stars waiting in the wings, including Arnold Allen and Yair Rodriguez, a memorable victory here could push either fighter to the front of the queue.

The oddsmakers’ predictions have Calvin Kattar as the betting favorite with opening odds of -235.

Get your Calvin Kattar vs Josh Emmett picks in.

Calvin Kattar vs Josh Emmett tale of the tape

Calvin Kattar has the better record against the shared opposition, at 4-0 to Josh Emmett’s record of 3-1 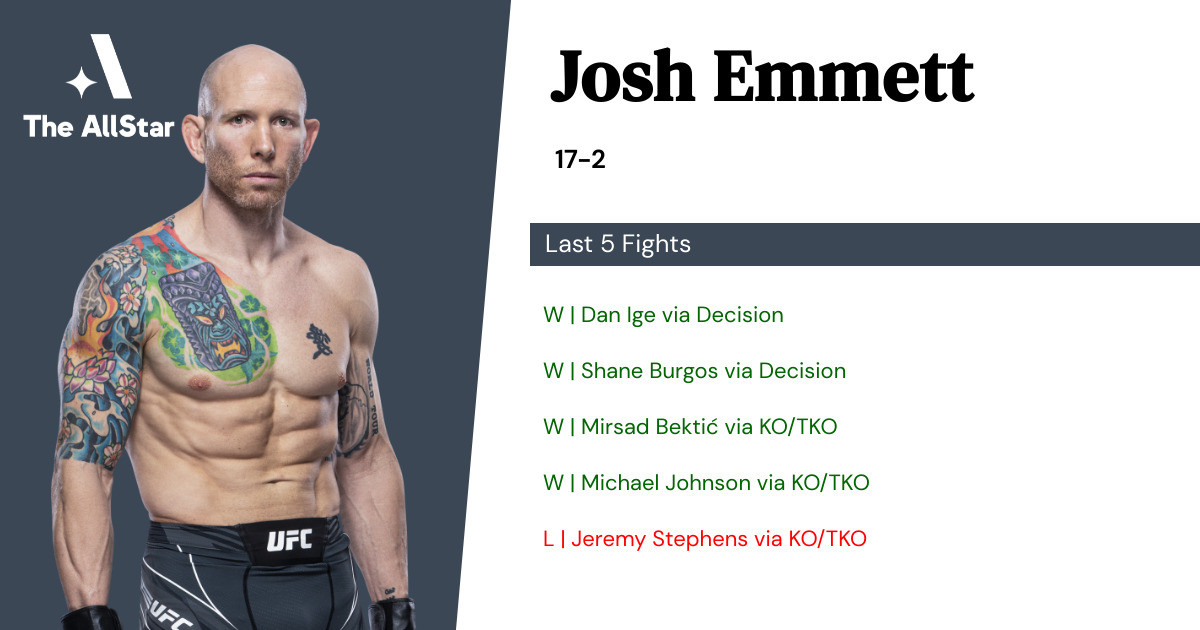 Josh Emmett has a 48% finish rate, including 6 by knockout, 2 by submission, 9 by decision. 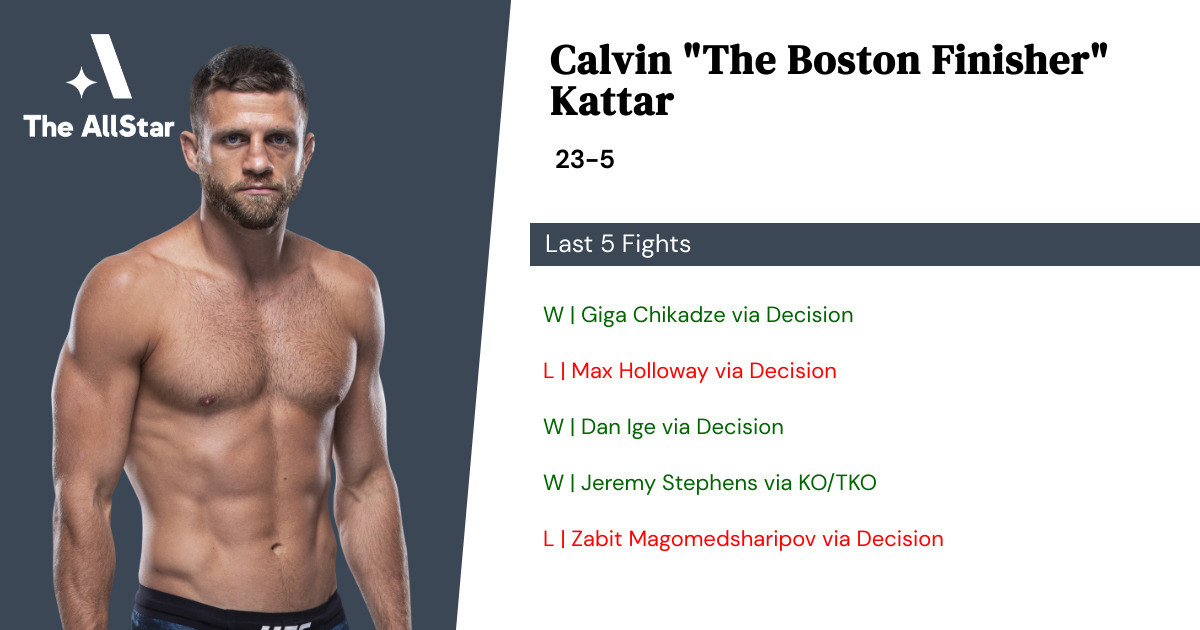 Calvin Kattar has a 57% finish rate, including 10 by knockout, 3 by submission, 10 by decision.

Calvin Kattar is looking to put together a winning streak, having last beaten Giga Chikadze at UFC Fight Night: Kattar vs. Chikadze.

Calvin Kattar vs Josh Emmett is set to go down at UFC Fight Night – Kattar vs. Emmett. The fight is expected to start at around 9:30pm EST on Saturday 18th June 2022.

ESPN+ is the best option to live stream Calvin Kattar vs Josh Emmett if you live in the United States. Outside of the USA, the best option is to register for UFC Fight Pass.

Where can I get the best odds for the Calvin Kattar vs Josh Emmett UFC fight?

Use the AllStar’s directory to find the best sportsbooks and recommendations on where to place UFC bets online. If you just want to play for fun, head over to to our Fantasy UFC picks app to make your fight predictions for Calvin Kattar vs Josh Emmett totally FREE.