Charles Oliveira vs Justin Gaethje is set to go down at UFC 274: Oliveira vs. Gaethje at 12:00am EST on Sunday 8th May 2022 in a UFC Lightweight championship matchup.

Charles Oliveira defended his UFC title for the first time after a submission victory over Dustin Poirier at UFC 269.

Justin Gaethje will earn his second shot at the UFC Lightweight belt after an epic decision victory over Michael Chandler in November.

Charles Oliveira opened as a -160 betting favorite. Placing a bet on Oliveira means you would need to bet $160 in order to win $100.

This five-round fight will be for the UFC Lightweight title and will headline UFC 274.

Justin Gaethje has been practicing his wrestling with UFC Welterweight champion and current #1 P4P UFC fighter Kamaru Usman in the lead-up to this fight.

Charles Oliveira earned his third submission win in his last four fights after sinking in a rear-naked choke against Dustin Poirier in Round 3 of their championship fight in December.

The Brazilian is on an incredible 10-fight winning streak that began in 2018. Since then, he has earned notable victories over Kevin Lee, Tony Ferguson and Michael Chandler.

Justin Gaethje bounced back from his submission loss against former champion Khabib Nurmagomedov with a Fight of the Year contender win over Michael Chandler at UFC 268.

This fight is absolutely BANANAS 😳

Gaethje has won five of his last six UFC fights, with four of his wins coming via knockout. This will be his second chance to win the UFC Lightweight title after his unsuccessful challenge against Nurmagomedov in October 2020.

While Charles Oliveira is 1-inch shorter than his opponent at 5”10, he will have a significant 4-inch reach advantage in this matchup.

Despite Gaethje’s wrestling background, he has never landed a takedown in the UFC or attempted a submission. In contrast, Charles Oliveira lands 2.50 TDs per 15 minutes and attempts 2.8 submissions per 15 minutes.

The matchmakers would struggle to think of a more exciting matchup to make in any weight class in the UFC.

This fight pits the UFC’s most dangerous submission artist and all-time submission record-holder against a lethal knockout artist in Gaethje.

Charles Oliveira has shown he is more than capable of knocking his opponent out, with three KO victories since 2019. “Do Bronx” has the most finishes and submissions in UFC history.

Justin Gaethje is never involved in a dull fight. With vicious punching power and devastating leg kicks, Gaethje can end the fight at any moment.

The stakes couldn’t be higher in this UFC Lightweight championship matchup. This will be a second chance at glory for Justin Gaethje, who failed in his shot against consensus-UFC Lightweight G.O.A.T Khabib Nurmagomedov.

Charles Oliveira will be looking to defend his title for the second time. The joint-record number of UFC Lightweight title defenses is three, held by four fighters.

The oddsmakers’ predictions have Charles Oliveira as the favorite in this matchup with opening odds of -160.

Michael Chandler, who has fought both men in the past 12 months, made his predictions on the fight:

MMA fighters have chimed in with their picks on James Lynch’s ‘MMA Pros Picks’ feature. Fighters are clearly in favor of Oliveira, who leads 26 to 12.

Fellow Brazilian UFC fighter Renato Moicano made his pick in favor of Oliveira:

“Gaethje is a great fighter, aggressive, good wrestling defense, but I think Charles Oliveira will finish him.”

Get your Charles Oliveira vs Justin Gaethje picks in.

Charles Oliveira vs Justin Gaethje tale of the tape

Both fighters have a record of 3-1 against the common opposition. 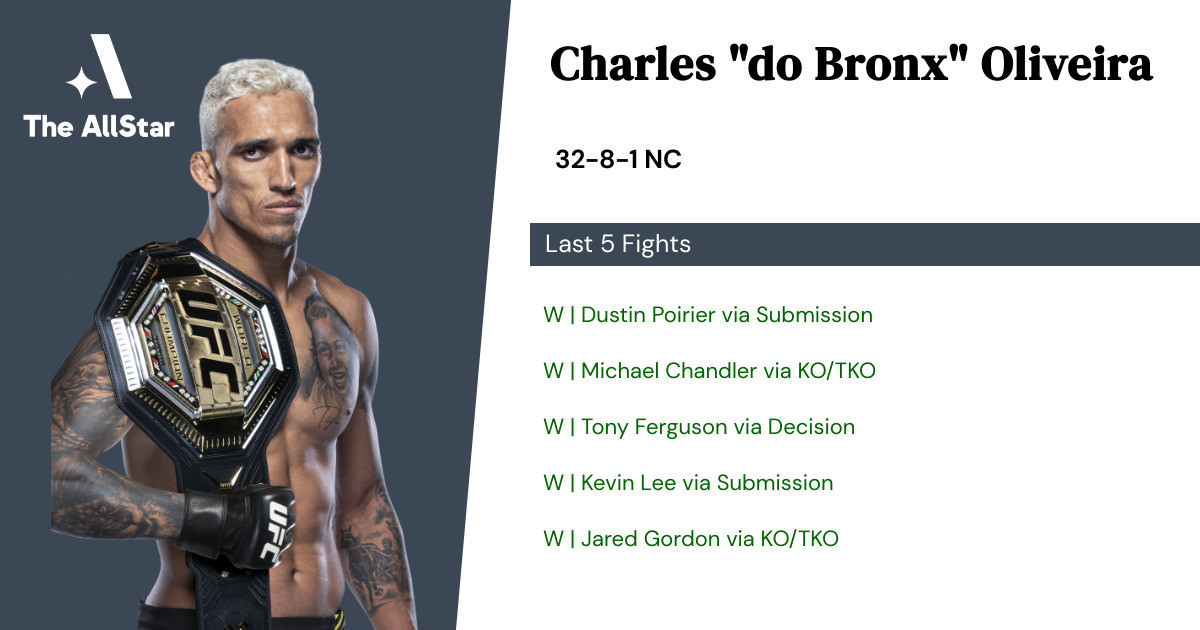 Charles Oliveira has a 91% finish rate, including 9 by knockout, 20 by submission, 3 by decision. 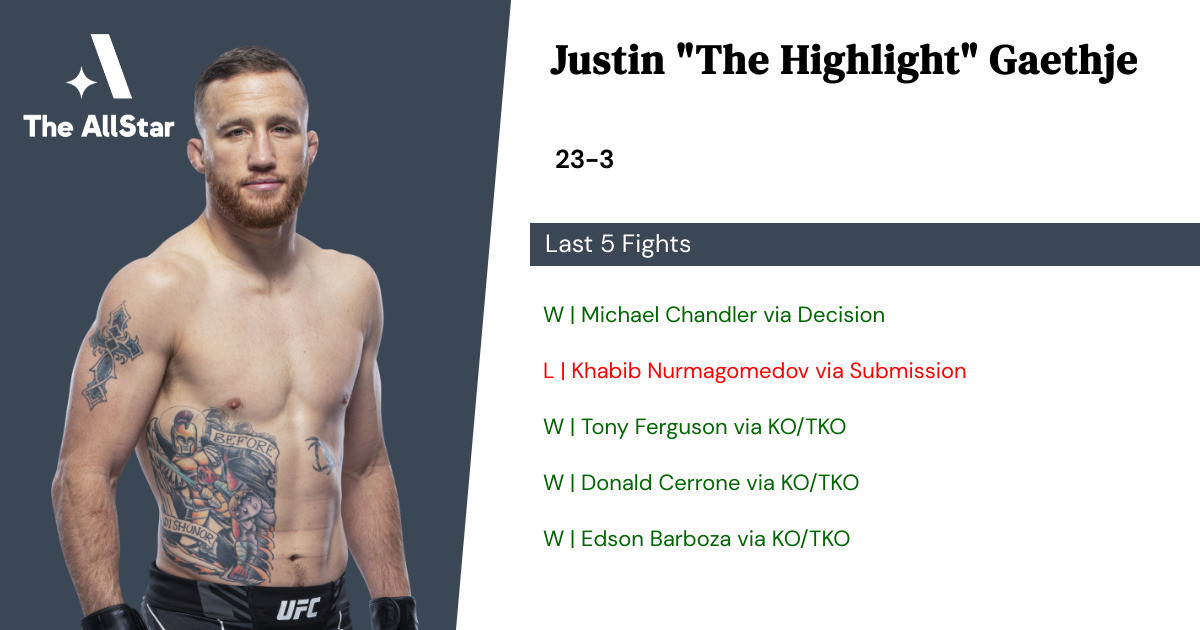 Justin Gaethje has a 87% finish rate, including 18 by knockout, 2 by submission, 3 by decision.

Justin Gaethje is looking to put together a winning streak, having last beaten Michael Chandler at UFC 268: Usman vs. Covington 2.

Charles Oliveira vs Justin Gaethje is set to go down at UFC 274 – Oliveira vs. Gaethje. The fight is expected to start at around 12:00am EST on Sunday 8th May 2022.

ESPN+ is the best option to live stream Charles Oliveira vs Justin Gaethje if you live in the United States. Outside of the USA, the best option is to register for UFC Fight Pass.

Where can I get the best odds for the Charles Oliveira vs Justin Gaethje UFC fight?

Use the AllStar’s directory to find the best sportsbooks and recommendations on where to place UFC bets online. If you just want to play for fun, head over to to our Fantasy UFC picks app to make your fight predictions for Charles Oliveira vs Justin Gaethje totally FREE.