Chase Hooper suffered his second loss in the UFC after dropping a decision to Steven Peterson at UFC 263.

Felipe Colares ended up on the wrong side of a narrow split decision to Chris Gutierrez in his last fight in October.

Felipe Colares will be the betting favorite with opening odds of -155.

Chase Hooper is the betting underdog with opening odds of +140.

This Featherweight matchup is expected to be on the prelims at UFC Fight Night: Holm vs. Vieira.

Chase Hooper is now 2-2 in the UFC after a resounding defeat to Steven Peterson last June. The jiu-jitsu expert found it difficult to stand with his opponent in the striking department.

HOW'D HE ESCAPE?! 🤯@Chase_Hooper is not letting up that easy. #UFC263 pic.twitter.com/RwZC4dpTtl

Contender Series graduate Hooper emerged victorious on his UFC debut, finishing Daniel Teymur in Round 1. However, he was outstruck by Alex Caceres in his next fight before earning a comeback submission in the third round against Peter Barrett.

Felipe Colares has alternated wins and losses since making his debut in 2019. His last fight ended in a split decision loss against Chris Gutierrez.

Felipe Colares picked up Geraldo de Freitas Jr. and "almost dumped him outside the Octagon." (😉 @BrendanFitzTV)

Colares has earned decision wins over Domingo Pilarte and Luke Sanders during his time in the UFC. He is now 2-3 in the promotion.

Chase Hooper is one of the youngest fighters on the UFC roster at 22 years old, while Felipe Colares is 28.

Both men have the same number of pro fights on their record with 13.

Hooper will be the far-taller fighter at 6”1 compared to Colares who is 5”8. Hooper will also benefit from a huge 6-inch reach advantage.

The stats show how dangerous Hooper is with submissions, with “The Dream” attempting 2.2 submissions per 15 minutes.

This is a fascinating matchup between two jiu-jitsu practitioners and will likely play out as an intricate battle on the mat.

While Colares arguably has the more polished striking skills, Hooper has been training with elite striker Stephen “Wonderboy” Thompson and could surprise UFC fans with his stand-up game.

Both of these fighters enter this matchup off the back of a defeat, so there is a lot at stake. While both men are still young and in the early stages of their careers, another defeat could put their place in the UFC in doubt.

The oddsmakers’ predictions have Felipe Colares as the slight betting favorite with opening odds of -155.

Get your Chase Hooper vs Felipe Colares picks in.

Chase Hooper vs Felipe Colares tale of the tape 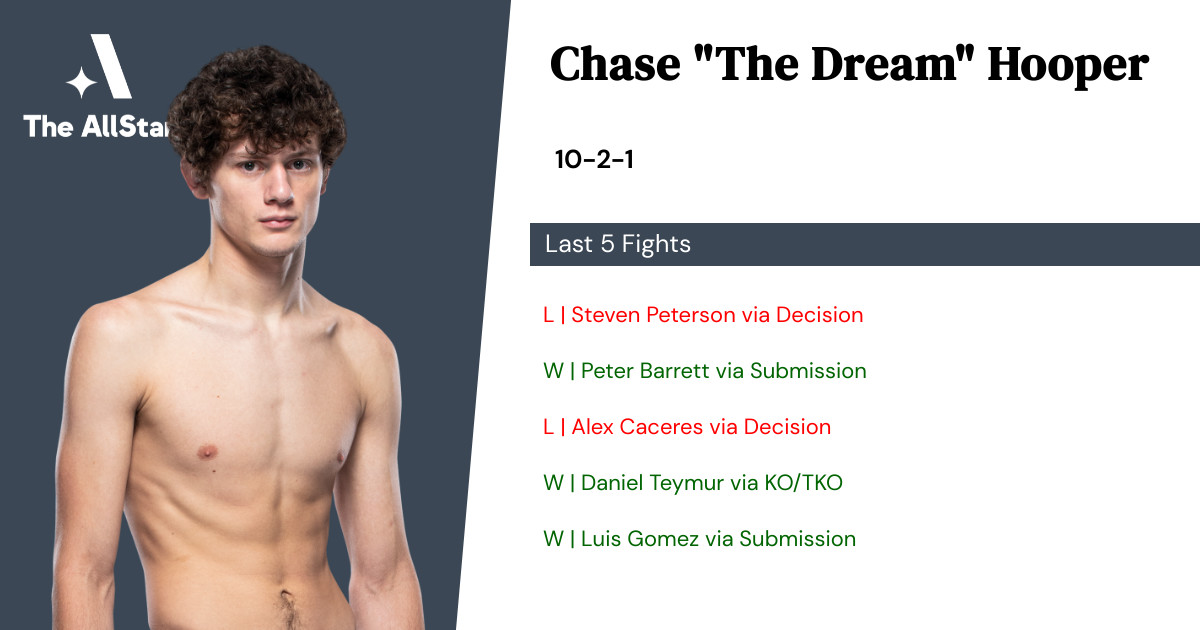 Chase Hooper has a 80% finish rate, including 3 by knockout, 5 by submission, 2 by decision.

Chase Hooper is looking to get back to winning ways after a loss at the hands of Renato Moicano at Fury Pro Grappling 3. 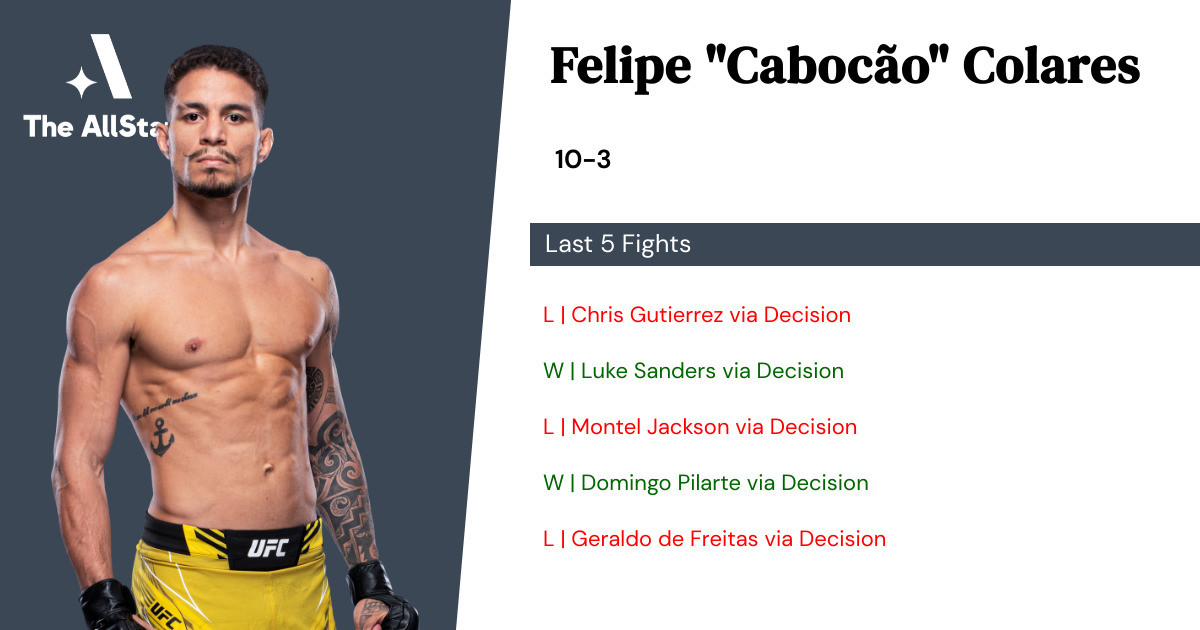 Felipe Colares has a 70% finish rate, including 2 by knockout, 5 by submission, 3 by decision.

Felipe Colares is looking to get back to winning ways after a loss at the hands of Chris Gutierrez at UFC Fight Night: Dern vs. Rodriguez.

Chase Hooper vs Felipe Colares is set to go down at UFC Fight Night – Holm vs. Vieira. The fight is expected to start at around 8:00pm EST on Saturday 21st May 2022.

ESPN+ is the best option to live stream Chase Hooper vs Felipe Colares if you live in the United States. Outside of the USA, the best option is to register for UFC Fight Pass.

Where can I get the best odds for the Chase Hooper vs Felipe Colares UFC fight?

Use the AllStar’s directory to find the best sportsbooks and recommendations on where to place UFC bets online. If you just want to play for fun, head over to to our Fantasy UFC picks app to make your fight predictions for Chase Hooper vs Felipe Colares totally FREE.