Cody Stamann vs Eddie Wineland is set to go down at UFC Fight Night: Kattar vs. Emmett at 4:30pm EST on Saturday 18th June 2022 in a 135lbs matchup.

Cody Stamann enters this fight coming off of three straight defeats after a recent submission loss to Said Nurmagomedov at UFC 270.

Cody Stamann will be the betting favorite with opening odds of -515.

Eddie Wineland is the betting underdog with opening odds of +400.

This 135lbs matchup is expected on the prelims at UFC Fight Night: Kattar vs. Emmett.

Cody Stamann lost to Said Nurmagomedov inside of 50 seconds after getting caught in a guillotine choke at UFC 270.

After the final bell rang for his #UFC250 fight, Stamann showed some of the emotion he had been holding back. pic.twitter.com/3XhzSz7lcE

Stamann has now lost three fights in a row and hasn’t recorded a victory since June 2020, when he beat Brian Kelleher by decision at UFC 250.

Eddie Wineland was finished by John Castaneda in the first round of their matchup in February.

Wineland has lost four of his last five UFC fights, with his sole win coming in 2019 against Grigorii Popov.

Eddie Wineland and Cody Stamann are both 5”6, although Wineland will have a significant 4-inch reach advantage in this fight.

Wineland is the older man at 37 years old and has more pro-MMA experience than the 32-year-old Cody Stamann.

The stats reveal that Stamann often implements grappling into his gameplan with an average of 2.78 TD’s per 15 minutes. Wineland’s 86% TD defense will likely be tested in this matchup.

This is a fascinating matchup between two UFC veterans. Stamann was on the way up in the 135lbs division before his run of three consecutive defeats.

Eddie Wineland is the former WEC Bantamweight champion who has fought in UFC for over 10 years. Five of his six UFC wins have come by knockout.

Both of these bantamweights have a lot on the line in a stacked 135lbs division. Stamann is the heavy favorite in this matchup, so the pressure is on him to snap his three-fight losing streak.

Wineland is looking for his first win in over three years and may be fighting for his future in the promotion.

The oddsmakers’ predictions have Cody Stamann as the heavy betting favorite with opening odds of -515.

Get your Cody Stamann vs Eddie Wineland picks in.

Cody Stamann vs Eddie Wineland tale of the tape

Cody Stamann has the better record against the shared opposition, at 2-0 to Eddie Wineland’s record of 0-2 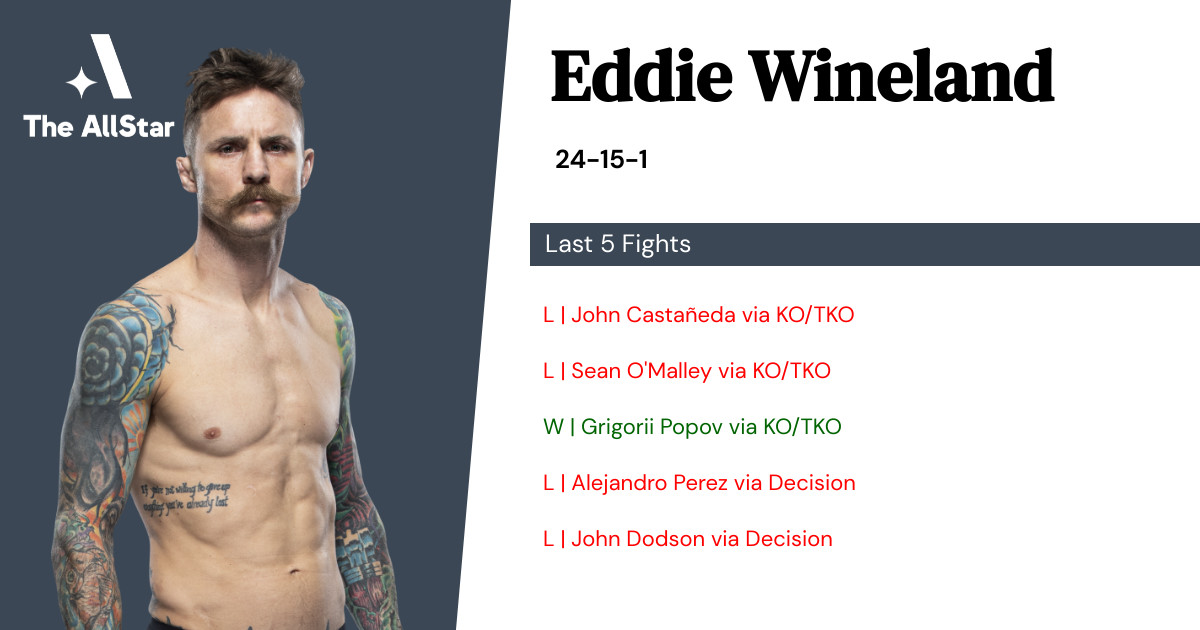 Eddie Wineland has a 84% finish rate, including 14 by knockout, 5 by submission, 4 by decision.

Eddie Wineland is currently on a 2 fight losing skid. 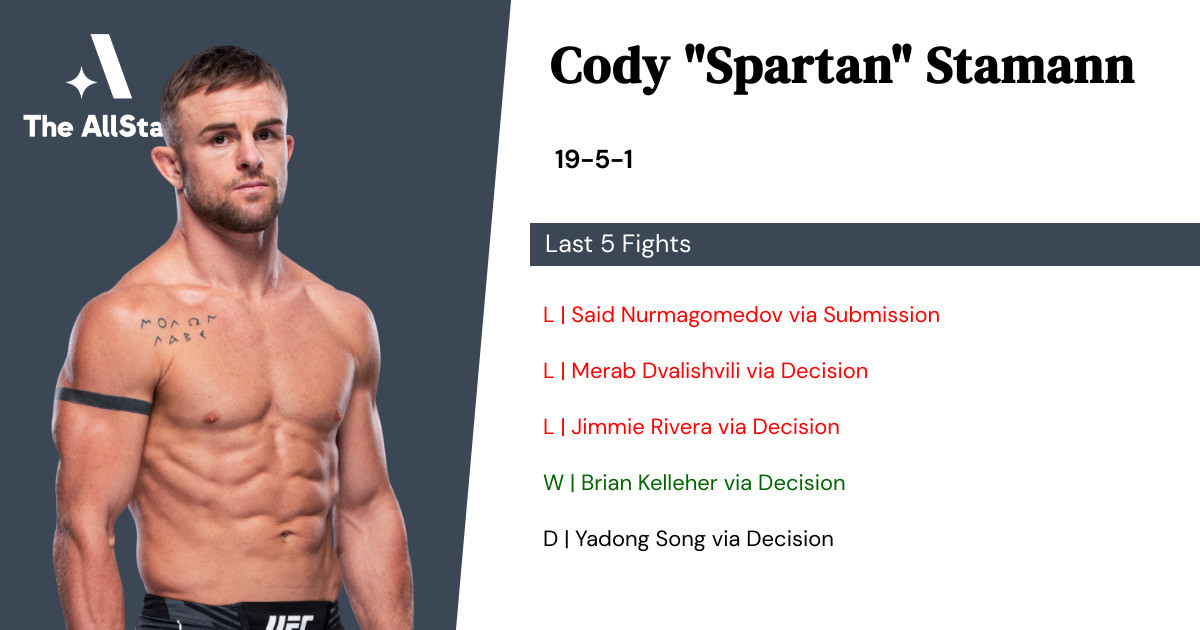 Cody Stamann has a 43% finish rate, including 6 by knockout, 2 by submission, 11 by decision.

Cody Stamann is currently on a 3 fight losing skid.

Cody Stamann vs Eddie Wineland is set to go down at UFC Fight Night – Kattar vs. Emmett. The fight is expected to start at around 4:30pm EST on Saturday 18th June 2022.

ESPN+ is the best option to live stream Cody Stamann vs Eddie Wineland if you live in the United States. Outside of the USA, the best option is to register for UFC Fight Pass.

Where can I get the best odds for the Cody Stamann vs Eddie Wineland UFC fight?

Use the AllStar’s directory to find the best sportsbooks and recommendations on where to place UFC bets online. If you just want to play for fun, head over to to our Fantasy UFC picks app to make your fight predictions for Cody Stamann vs Eddie Wineland totally FREE.