Curtis Blaydes vs Chris Daukaus is set to go down at UFC Fight Night: Blaydes vs. Daukaus at 9:30pm EST on Saturday 26th March 2022 in a 265lbs matchup.

Curtis Blaydes bounced back from a brutal KO loss against Derrick Lewis with a comfortable decision win over Jairzinho Rozenstruik in September.

Curtis Blaydes will be the heavy favorite with opening betting odds of -300.

Chris Daukaus is the betting underdog with opening odds of +255.

This Heavyweight fight will serve as the five-round headliner at UFC Fight Night: Blaydes vs Daukaus.

Curtis Blaydes smothered kickboxer Jairzinho Rozenstruik in his last fight, keeping him on the mat for most of the fight.

Blaydes suffered one of the worst knockouts in recent memory against Derrick Lewis in February 2021. The wrestling standout is now 10-3 in the UFC.

Chris Daukaus suffered his first UFC defeat against Derrick Lewis in December. He was also headlining a card for the first time.

POURING IT ON! 💥@ChrisDaukausMMA gets an early TKO victory in RD 1! #UFCVegas19 pic.twitter.com/V96QbLmwlr

Daukaus won his first four UFC fights in impressive fashion, knocking out all of his opponents. A former police officer, Daukaus gave up his badge and has now committed to his martial arts career full-time.

Curtis Blaydes is just 1-inch taller than his opponent at 6”4, although he will have a sizeable 4-inch reach advantage over Daukaus.

Blaydes’ grappling approach is evident in his impressive takedown stats, landing a huge 6.28 TD’s per 15 minutes. In contrast, Daukaus has never landed a takedown in the UFC but has maintained a 100% TD defense.

Chris Daukaus has a killer 92% finishing rate in his career, while Blaydes has finished 67% of his victories.

This is one of the best fights to make in the Heavyweight Division right now. Curtis Blaydes was on his way to a title shot before his betting upset loss to Lewis, while the same can be said of Chris Daukaus.

Blaydes is almost certain to draw on his dominant grappling, but he has shown impressive skills on the feet in recent fights. Daukaus will need to keep this one standing to be in with a shot.

This fight pits #4 against #8 in the UFC Heavyweight Division and will have huge implications. The winner could be next in line for a title shot or title eliminator, with mouthwatering matchups against Tai Tuivasa, Stipe Miocic or Cyril Gane on the horizon.

The oddsmakers’ predictions see Curtis Blaydes as the sizeable favorite in this one with betting odds of -300.

Chris Daukaus made his predictions during an interview with The AllStar:

“I’m not a fool. I fully expect to be on my back at some point in this fight. I plan to stuff his shots as best I can and make him work.”

Get your Curtis Blaydes vs Chris Daukaus picks in.

Curtis Blaydes opened as a -300 betting favorite. Placing a bet on Blaydes means you would need to bet $300 in order to win $100.

Curtis Blaydes vs Chris Daukaus tale of the tape

Both fighters have a record of 2-1 against the common opposition. 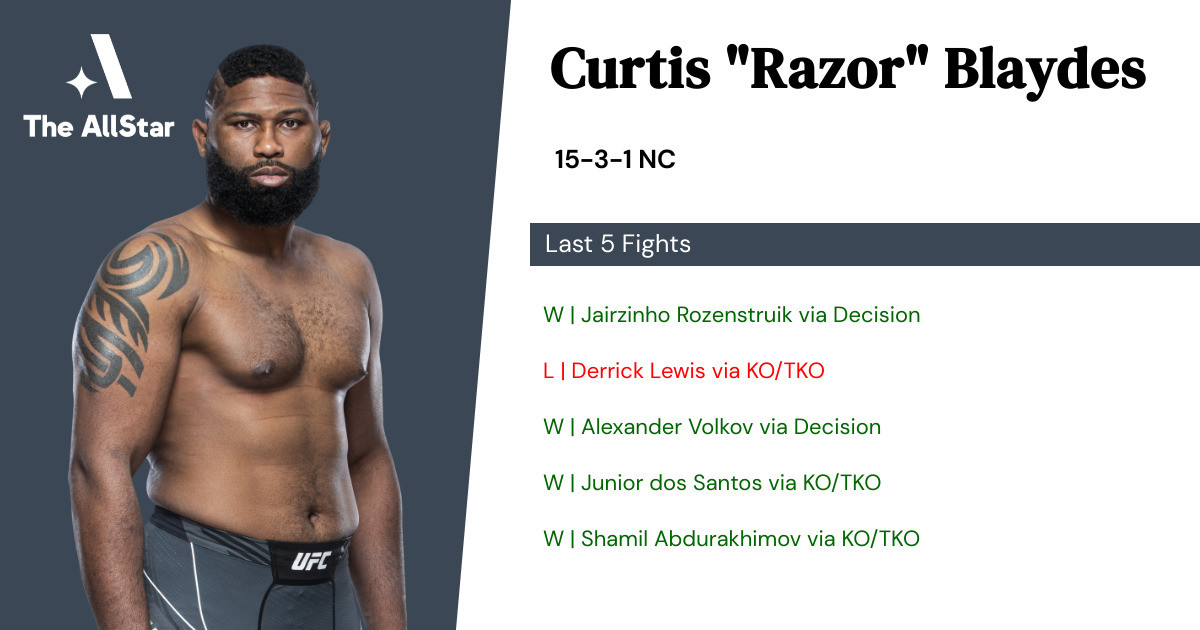 Curtis Blaydes has a 67% finish rate, including 9 by knockout, 1 by submission, 5 by decision.

Curtis Blaydes is looking to put together a winning streak, having last beaten Jairzinho Rozenstruik at UFC 266: Volkanovski vs. Ortega. 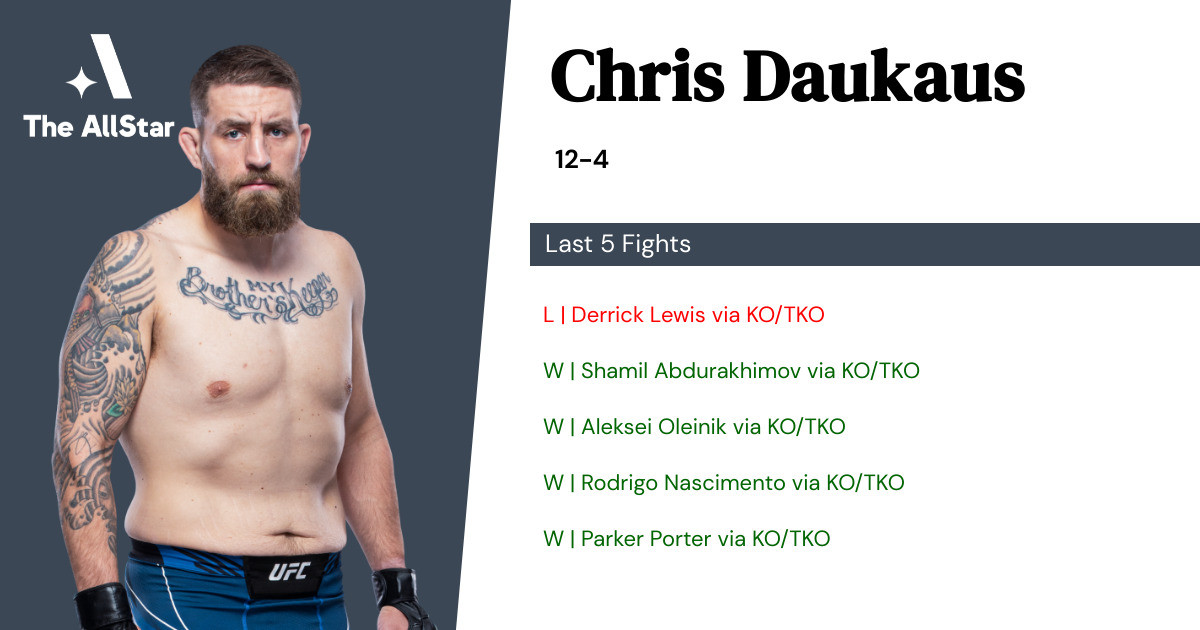 Chris Daukaus has a 92% finish rate, including 10 by knockout, 1 by submission, 1 by decision.

Chris Daukaus is looking to get back to winning ways after a loss at the hands of Derrick Lewis at UFC Fight Night: Lewis vs. Daukaus.

Curtis Blaydes vs Chris Daukaus is set to go down at UFC Fight Night – Blaydes vs. Daukaus. The fight is expected to start at around 9:30pm EST on Saturday 26th March 2022.

ESPN+ is the best option to live stream Curtis Blaydes vs Chris Daukaus if you live in the United States. Outside of the USA, the best option is to register for UFC Fight Pass.

Where can I get the best odds for the Curtis Blaydes vs Chris Daukaus UFC fight?

Use the AllStar’s directory to find the best sportsbooks and recommendations on where to place UFC bets online. If you just want to play for fun, head over to to our Fantasy UFC picks app to make your fight predictions for Curtis Blaydes vs Chris Daukaus totally FREE.