Danny Chavez vs Ricardo Ramos is set to go down at UFC Fight Night: Kattar vs. Emmett at 3:00pm EST on Saturday 18th June 2022 in a 145lbs matchup.

Danny Chavez was involved in a majority draw with Kai Kamaka last July, with only a point deduction saving him from defeat.

Ricardo Ramos dropped a unanimous decision to Zubaira Tukhugov in his last UFC appearance at UFC 267.

Ricardo Ramos will be the betting favorite with opening odds of -295.

Danny Chavez is the betting underdog with opening odds of +250.

Danny Chavez vs Ricardo Ramos was first reported on May 16th.

This fight is expected on the prelims at UFC Fight Night: Kattar vs. Emmett.

NON-STOP! 😤 Danny Chavez is doing damage all over!

📺 Tune in now on @ESPN pic.twitter.com/xU6LnMUDHr

Chavez was victorious on his UFC debut in August 2020 before dropping a decision to Jared Gordon the following fight.

Ricardo Ramos has alternated wins and losses over his last four fights. His most recent Octagon outing at UFC 267 ended in defeat to Zubaira Tukhugov.

Ramos last tasted victory in May 2021 with a decision win over Bill Algeo. Since making his debut in 2017, Ramos is 6-3 in the UFC.

Ricardo Ramos will be slightly taller than his opponent at 5”9 compared to Chavez who is 5”8. Crucially, Ramos will have a big 5-inch reach advantage in this matchup.

Although Danny Chavez is much older at 35 years old, 26-year-old Ramos has more MMA fights with 19.

Ramos has maintained a much higher finish rate of 67% of his career, compared to Chavez who has finished 28% of his wins.

Danny Chavez and Ricardo Ramos are both extremely tough featherweights who come to scrap.

Be prepared for a war in this 145lbs matchup.

Both fighters have plenty of the line in this matchup. Ramos enters this fight off the back of a defeat, while Chavez hasn’t recorded a victory since 2020.

The oddsmakers’ predictions have Ricardo Ramos as the clear favorite with opening betting odds of -295.

Get your Danny Chavez vs Ricardo Ramos picks in.

Danny Chavez vs Ricardo Ramos tale of the tape 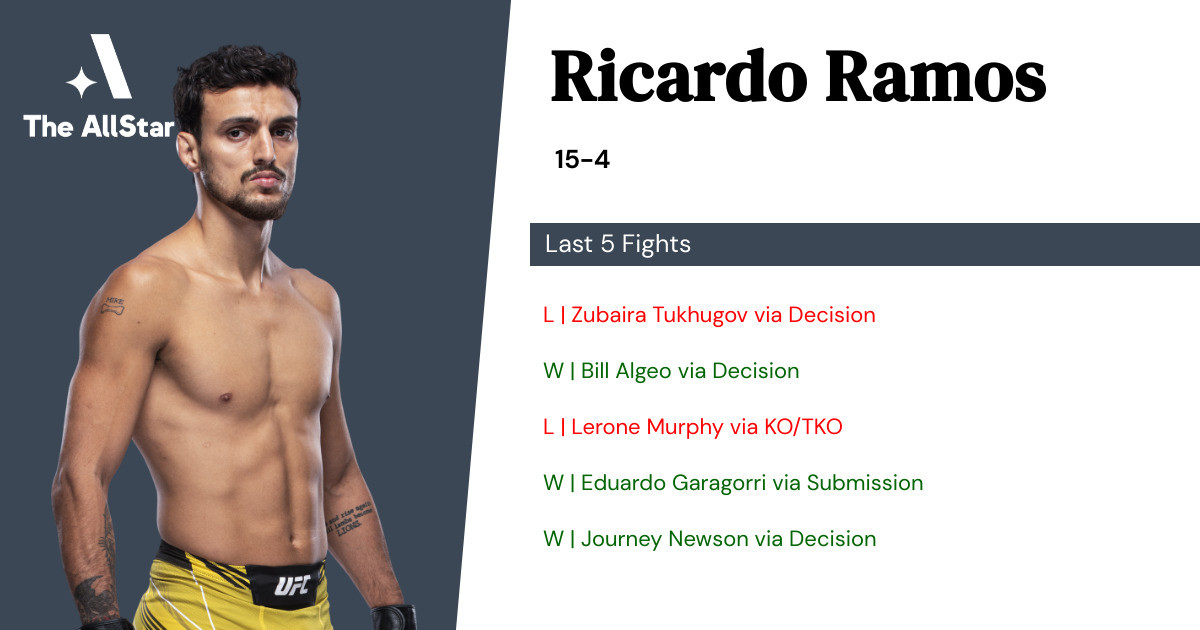 Ricardo Ramos has a 67% finish rate, including 3 by knockout, 7 by submission, 5 by decision.

Ricardo Ramos is looking to get back to winning ways after a loss at the hands of Arthur Portes at Submission Circus 5. 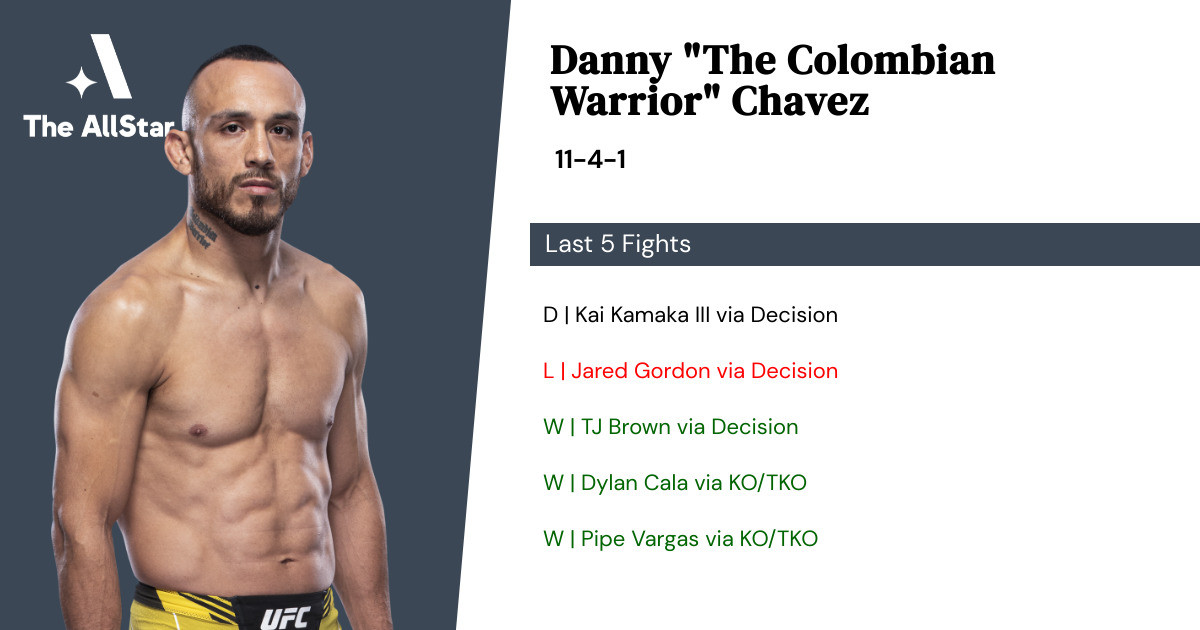 Danny Chavez has a 28% finish rate, including 3 by knockout, 8 by decision.

Danny Chavez vs Ricardo Ramos is set to go down at UFC Fight Night – Kattar vs. Emmett. The fight is expected to start at around 3:00pm EST on Saturday 18th June 2022.

ESPN+ is the best option to live stream Danny Chavez vs Ricardo Ramos if you live in the United States. Outside of the USA, the best option is to register for UFC Fight Pass.

Where can I get the best odds for the Danny Chavez vs Ricardo Ramos UFC fight?

Use the AllStar’s directory to find the best sportsbooks and recommendations on where to place UFC bets online. If you just want to play for fun, head over to to our Fantasy UFC picks app to make your fight predictions for Danny Chavez vs Ricardo Ramos totally FREE.