David Onama vs Garrett Armfield is set to go down at UFC Fight Night: Dos Anjos vs. Fiziev at 6:00pm EST on Saturday 9th July 2022 in a 145lbs matchup.

David Onama recorded his first win in the UFC with a first-round TKO over Gabriel Benitez in February.

Garrett Armfield will be making his promotional debut having last fought in May, earning a first-round KO over Steven Graham.

Check in with The AllStar for the latest odds on this matchup.

David Onama vs Garrett Armfield was first reported on July 5th, just days away from the fight.

This literally got done today. David Onama is BACK on the #UFCVegas58 card. He takes on FAC BW champion Garrett Armfield at 145 lbs.

Both guys fought in 2018 for the KCFA amateur title. Onama won via UD. Rematch on Saturday. (first rep. @shayhandicappin) pic.twitter.com/pagsqzlhAK

David Onama was originally booked to fight Austin Lingo before his opponent withdrew.

Garrett Armfield will step in to take his place. Interestingly, Onama and Armfield have fought each other in the amateur scene, with Onama coming out on top.

David Onama came good on his sophomore UFC appearance with an impressive display against Gabriel Benitez, eventually securing a TKO in the first round.

Onama was the heavy betting underdog on his UFC debut after stepping up on short notice to face Mason Jones. He ultimately lost the fight by unanimous decision.

Garrett Armfield will step in to take this fight on just a few days’ notice having last fought in May when he earned a 33-second KO.

Armfield is riding a three-fight winning streak. He fought David Onama in an amateur bout back in 2018, losing the fight by unanimous decision.

David Onama is the taller fighter at 5”11 compared to Armfield who is 5”7. He will also have a sizable 3-inch reach advantage.

Both of these fighters have similar pro MMA experience with 10 fights each. David Onama is three years older than Armfield.

David Onama showed UFC fans what he was all about with a vicious standing TKO victory over the tough Gabriel Benitez in February.

Got the call on short notice, but David Onama is throwing BOMBS 👊 #UFCVegas41 pic.twitter.com/yDVXgHj6VO

Onama will be facing short-notice replacement Garrett Armfield who he already beat back in 2018. This will be an interesting rematch on the biggest stage.

David Onama is the heavy betting favorite in this matchup, so there is a lot at stake. He is looking to build on his first UFC victory and put together a win streak.

Garrett Armfield is making his promotional debut and will be eager to establish his name in the UFC.

The oddsmakers’ predictions have David Onama as the heavy favorite. Check back with The AllStar for the latest betting odds.

Get your David Onama vs Garrett Armfield picks in.

David Onama vs Garrett Armfield tale of the tape 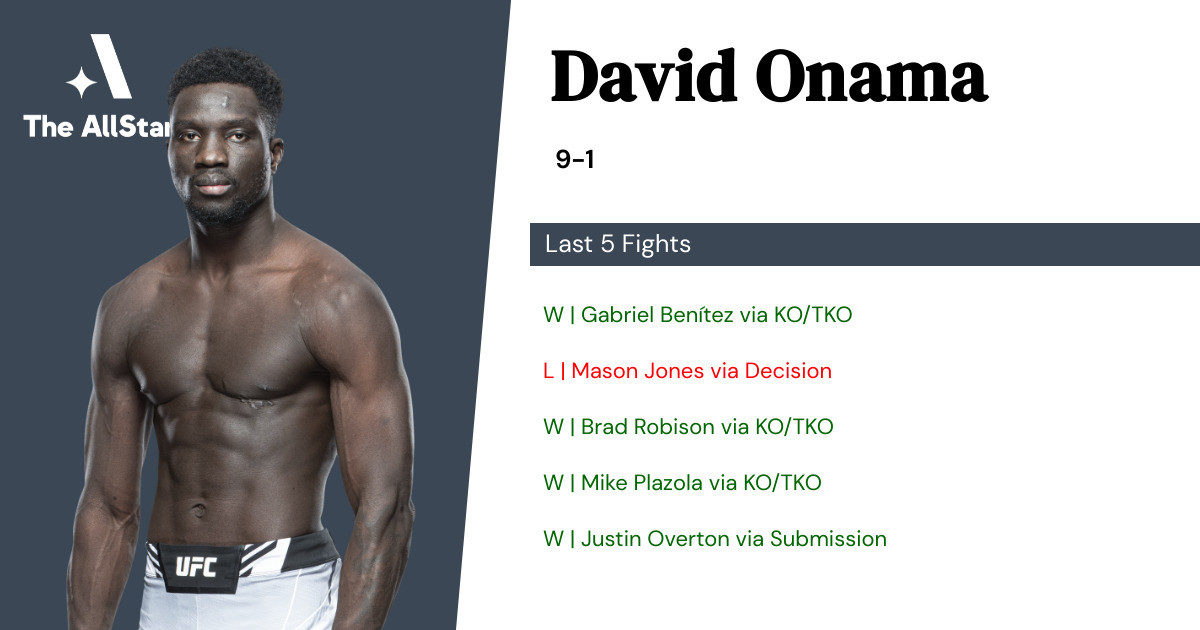 David Onama has a 100% finish rate, including 6 by knockout, 3 by submission.

David Onama is looking to put together a winning streak, having last beaten Gabriel Benítez at UFC Fight Night: Walker vs. Hill. 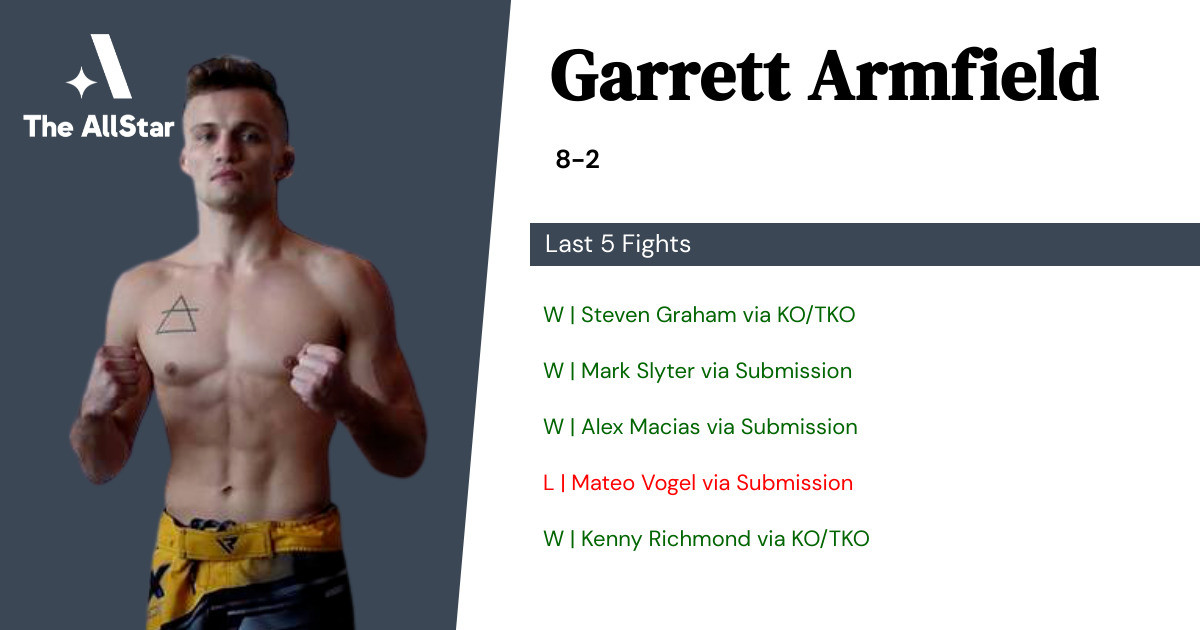 Garrett Armfield has a 100% finish rate, including 5 by knockout, 3 by submission.

David Onama vs Garrett Armfield is set to go down at UFC Fight Night – Dos Anjos vs. Fiziev. The fight is expected to start at around 6:00pm EST on Saturday 9th July 2022.

ESPN+ is the best option to live stream David Onama vs Garrett Armfield if you live in the United States. Outside of the USA, the best option is to register for UFC Fight Pass.

Where can I get the best odds for the David Onama vs Garrett Armfield UFC fight?

Use the AllStar’s directory to find the best sportsbooks and recommendations on where to place UFC bets online. If you just want to play for fun, head over to to our Fantasy UFC picks app to make your fight predictions for David Onama vs Garrett Armfield totally FREE.