After losing his Interim Heavyweight Championship bout against Cyril Gane, Derrick Lewis bounced back with a spectacular knockout against rising contender Chris Daukaus. Lewis holds the all-time record for UFC knockouts with 13.

Tai Tuivasa is on a four-fight win streak, winning every fight via knockout. He most recently beat Augusto Sakai in the second round at UFC 269 after securing first-round knockouts against Greg Hardy, Harry Hunsucker and Stefan Struve.

Derrick Lewis enters the fight as the odds on -180 betting favorite. Placing a bet on Lewis means you would need to bet $180 in order to win $100.

News of Derrick Lewis vs Tai Tuivasa first broke on January 7th, 2022. Lewis will be fighting on hometown territory in Houston, TX.

This mouthwatering Heavyweight clash will serve as the co-main event at UFC 271. The UFC officially announced the full UFC 271 card on January 22nd, 2021.

Derrick Lewis silenced the doubters (yet again) with a first-round knockout against rising Heavyweight Chris Daukaus. After losing his shot at the interim belt to Cyril Gane, Lewis is firmly back on track.

Before his loss to Gane, Lewis was on a four-fight winning streak, including notable KO victories over Curtis Blaydes and Aleksei Oleynik.

Tai Tuivasa is on a roll with four-straight knockout wins in the past 18 months. He dismantled Augusto Sakai in his most recent fight at UFC 269.

Tuivasa entered 2020 on the back of a three-fight losing streak before turning things around spectacularly. His first-round knockout against Stefan Struve at UFC 254 began his four-fight streak, the joint-highest active finishing streak in the UFC.

Derrick Lewis will have a four-inch reach advantage against Tuivasa with a 79-inch reach. He is also the slightly taller fighter, standing at 6”3 compared to Tuivasa who is 6”2.

Lewis is the significantly older fighter at 36 years old. Tuivasa is still only 28. Lewis has also had more than double the professional fights with 35 fights, while Tuivasa has fought professionally 17 times.

Tuivasa has finished 93% of his fights, with all finishes coming by knockout. Lewis has an 85% finishing rate, 21 by knockout and 1 by submission.

Tuivasa lands far more significant strikes per fight with an average of 4.63 per minute, while Lewis lands 2.52.

This fight matches up two of the most explosive Heavyweight knockout artists in the UFC. Derrick Lewis, the UFC all-time KO record holder, puts his opponents to sleep in an instant.

Tuivasa has shown he can hang with the best Heavyweights, but this will be an altogether different test. Expect a wild fight and don’t blink – this one could be over at any moment.

While Derrick Lewis only just lost his shot at the Heavyweight interim belt in August 2021, many would like to see a rematch against current champion Francis Ngannou. This fight is a must-win if Lewis wants another chance at the belt.

Tai Tuivasa is on his way up the Heavyweight rankings, currently sitting at #11. To take out a legend like Derrick Lewis would cement his place in the Top Ten.

Chael Sonnen believes the fight has been made purely for entertainment:

“Do you want to know what’s on the line? There’s nothing on the line. This is for fun.”

The oddsmakers’ predictions have Derrick Lewis as the favorite with odds of -180.

Chael Sonnen struggled to pick a winner in this one:

“Either one of these guys can beat the other.”

“I like both guys, but I have to go with Tai Tuivasa.”

Get your Derrick Lewis vs Tai Tuivasa picks in.

Where to bet on Derrick Lewis vs Tai Tuivasa

Derrick Lewis vs Tai Tuivasa tale of the tape

Derrick Lewis has the better record against the shared opposition, at 1-1 to Tai Tuivasa’s record of 0-2 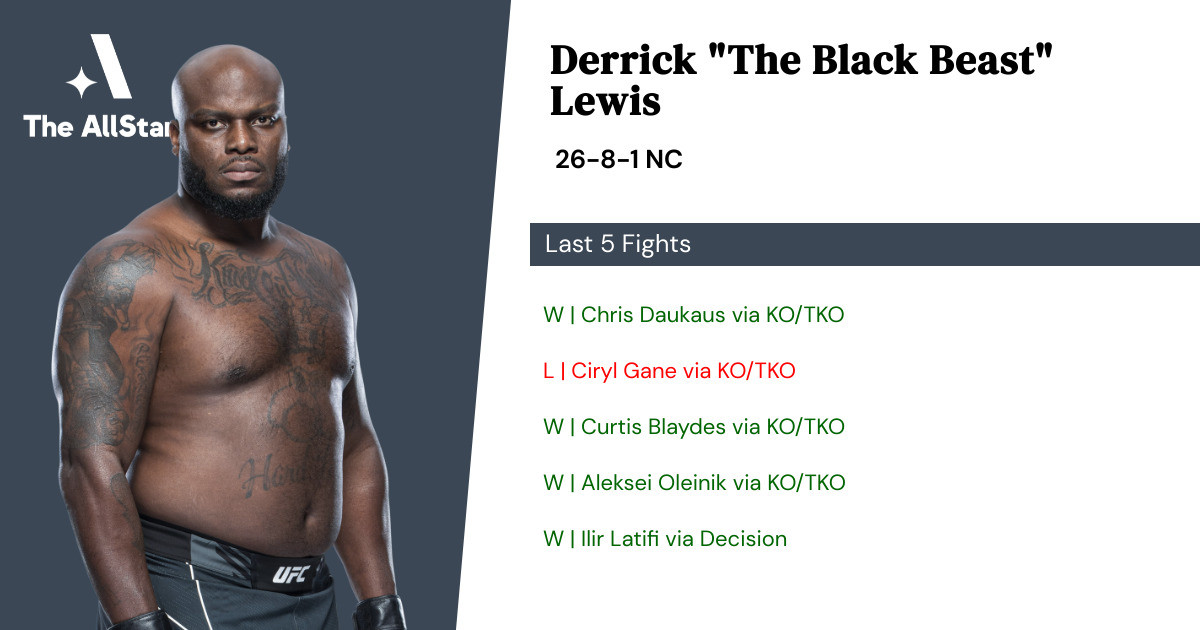 Derrick Lewis has a 85% finish rate, including 21 by knockout, 1 by submission, 4 by decision.

Derrick Lewis is looking to put together a winning streak, having last beaten Chris Daukaus at UFC Fight Night: Lewis vs. Daukaus. 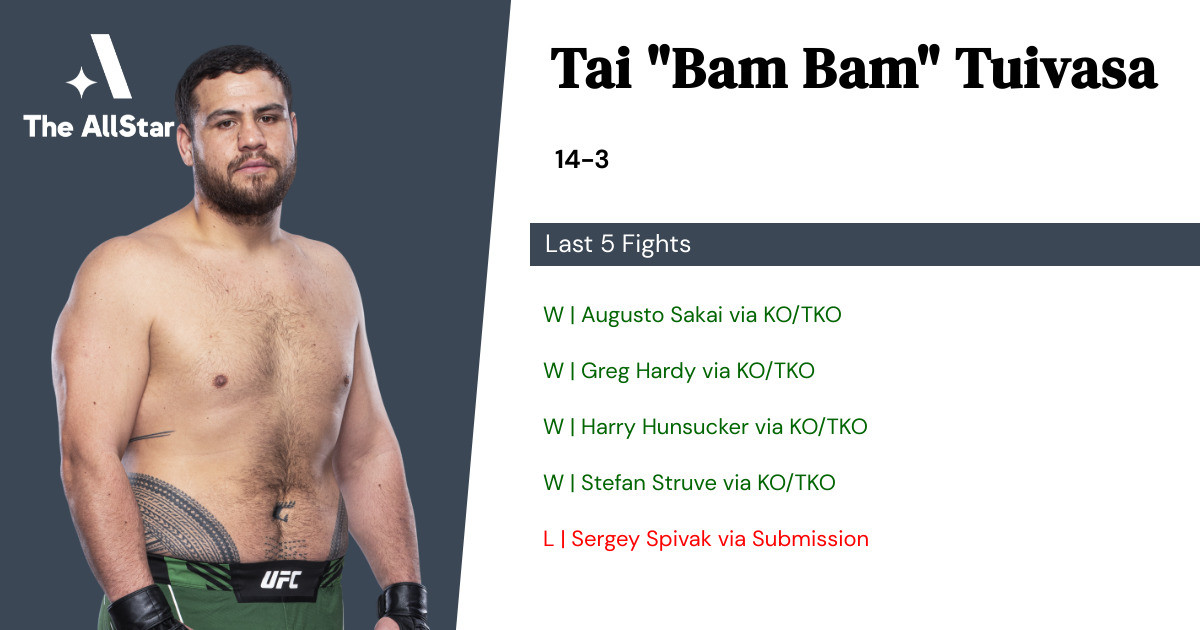 Tai Tuivasa has a 93% finish rate, including 13 by knockout, 1 by decision.

Derrick Lewis vs Tai Tuivasa is set to go down at UFC 271 – Adesanya vs. Whittaker 2. The fight is expected to start at around 10:30pm EST on Saturday 12th February 2022.

ESPN+ is the best option to live stream Derrick Lewis vs Tai Tuivasa if you live in the United States. Outside of the USA, the best option is to register for UFC Fight Pass.

Where can I get the best odds for the Derrick Lewis vs Tai Tuivasa UFC fight?