William Knight also enters this fight on the back of a defeat after a decision loss to Maxim Grishin in February.

Devin Clark will be the betting favorite with opening odds of -175.

William Knight is the betting underdog with opening odds of +155.

This fight will be contested in the UFC Heavyweight Division, despite both men usually fighting at 205lbs.

Knight stepped up to Heavyweight in his short-notice bout against Maxim Grishin after missing the Light Heavyweight limit by 12 lbs.

Devin Clark racked up two wins in the first half of 2020 before his current streak of two defeats. Clark was choked out by Anthony Smith before a decision loss to Cutelaba.

The wire is out!! Recovery going strong pic.twitter.com/SRUYiTRruO

Clark had previously won three of his last four UFC fights. Since making his UFC debut in 2016, Clark has accumulated a 6-6 record.

This will be Devin Clark’s first fight since his brutal injury against Cutelaba which resulted in a loss of teeth.

William Knight found himself out-grappled by Maxim Grishin in his last Octagon appearance at UFC 271.

William Knight with a crazy KO of Fabio Cherant! pic.twitter.com/qbZzSHDSDB

Knight won three of his first four UFC fights, including a brutal first-round knockout win against Fabio Cherant in August.

Devin Clark will be the taller fighter in this matchup at 6”0 inches tall, while Knight is 5”10. Clark will also have a 2-inch reach advantage.

William Knight is older at 33 years old compared to Clark who is 31. However, Clark has the edge in terms of pro MMA experience with 18 fights to Knight’s 14.

This fight promises to be an intriguing matchup in the UFC Heavyweight division. William Knight is an extremely explosive fighter considered one of the most gifted physical athletes in the entire promotion.

Knight will be up against the seasoned grappling prowess of Devin Clark, who has the ability to grind out victories with his dominant top control.

Both of these fighters into this matchup coming off of defeats, so everything is at stake. Devin Clark in particular has something to prove after a run of two defeats.

The bookmakers’ predictions have Devin Clark as the betting favorite with opening odds of -175.

Get your Devin Clark vs William Knight picks in.

Devin Clark vs William Knight tale of the tape 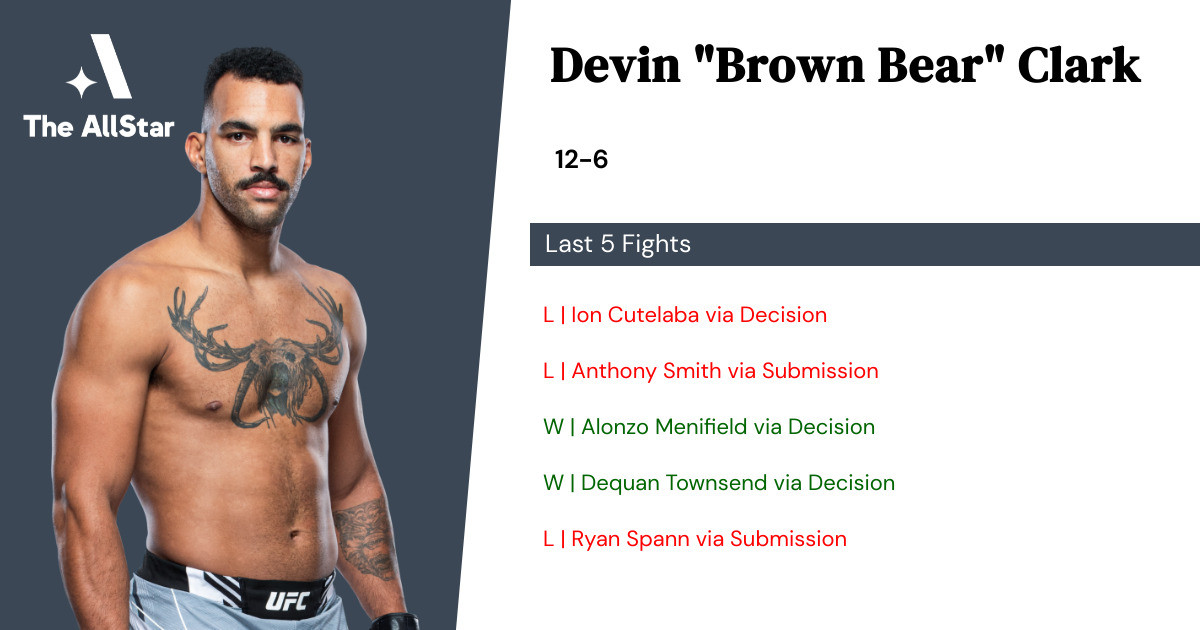 Devin Clark has a 34% finish rate, including 3 by knockout, 1 by submission, 8 by decision.

Devin Clark is currently on a 2 fight losing skid. 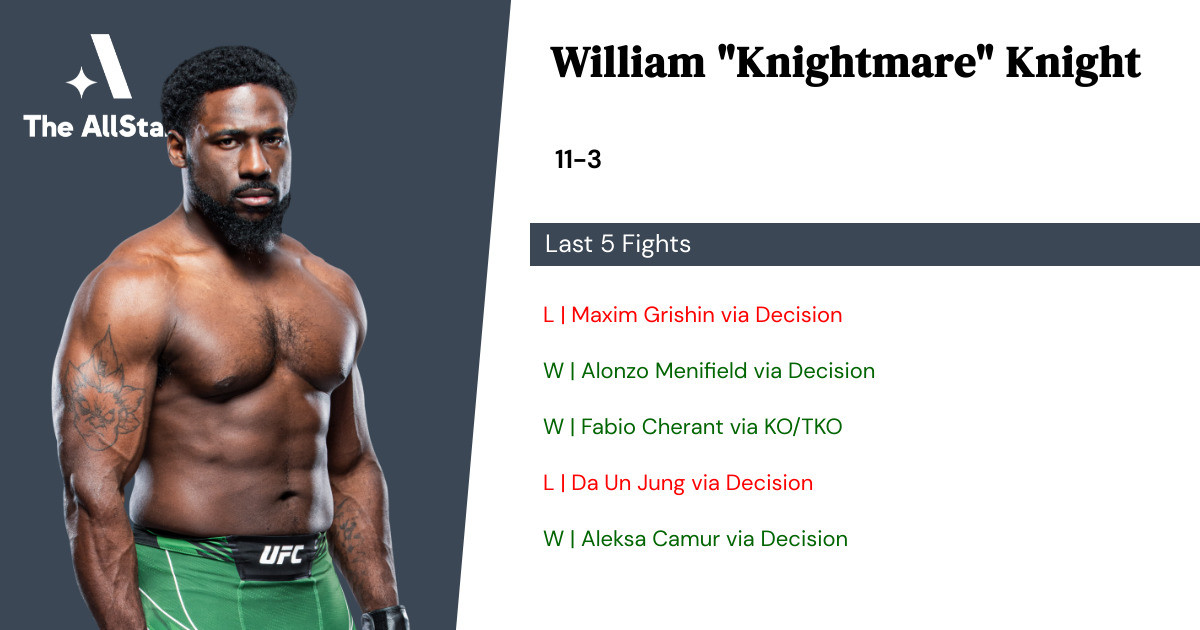 William Knight has a 82% finish rate, including 8 by knockout, 1 by submission, 2 by decision.

William Knight is looking to get back to winning ways after a loss at the hands of Anthony Malaguti at Top Level Pro Grappling 4.

ESPN+ is the best option to live stream Devin Clark vs William Knight if you live in the United States. Outside of the USA, the best option is to register for UFC Fight Pass.

Where can I get the best odds for the Devin Clark vs William Knight UFC fight?

Use the AllStar’s directory to find the best sportsbooks and recommendations on where to place UFC bets online. If you just want to play for fun, head over to to our Fantasy UFC picks app to make your fight predictions for Devin Clark vs William Knight totally FREE.