Donald Cerrone has now lost five fights in a row, the worst run in his career. His last Octagon appearance ended in a first-round TKO defeat to Alex Morono.

Joe Lauzon will be returning to the Octagon after more than 2 ½ years away. His last UFC appearance ended in a first-round TKO win over Jonathan Pierce.

Donald Cerrone will be the betting favorite with opening odds of -175.

Joe Lauzon is the betting underdog with opening odds of +155.

This fight was initially booked for April 30th before the UFC moved it forward to UFC 274 on May 7th.

A win for Donald Cerrone would give him the UFC all-time win record with 24 victories.

Donald Cerrone is hoping to return to the win column after a run of five straight defeats. In his defense, he has faced some killers during this time, including Conor McGregor, Justin Gaethje and Tony Ferguson.

Cowboy had previously been on an impressive streak of four wins from five, including finishes over Alexander Hernandez, Mike Perry and Yancy Medeiros.

Joe Lauzon emerged victorious in his last UFC fight over 2 ½ years ago, defeating Jonathan Pierce with a first-round TKO.

This win snapped a three-fight losing streak. Lauzon’s fight with Cerrone will be his 28th fight in the UFC.

Donald Cerrone is the taller man at 6”1 compared to Joe Lauzon who is 5”10. Cowboy will also have a small 2-inch reach advantage.

The stats show that Joe Lauzon is more likely to mix in a takedown with an average of 2.39 TDs per 15 minutes.

This fight promises to be a scrap from the opening bell. Both of these UFC legends have dozens of bruising wars and memorable fights during their time in the promotion, so don’t miss this one.

Neither man is fighting to enter title contention, but their legacy and reputation remain on the line.

With Donald Cerrone on a five-fight losing streak, another defeat could spell the end of his time in the UFC.

The oddsmakers’ predictions see Donald Cerrone as the favorite with opening betting odds of -175.

Get your Donald Cerrone vs Joe Lauzon picks in.

Donald Cerrone vs Joe Lauzon tale of the tape

Donald Cerrone has the better record against the shared opposition, at 6-4 to Joe Lauzon’s record of 3-6 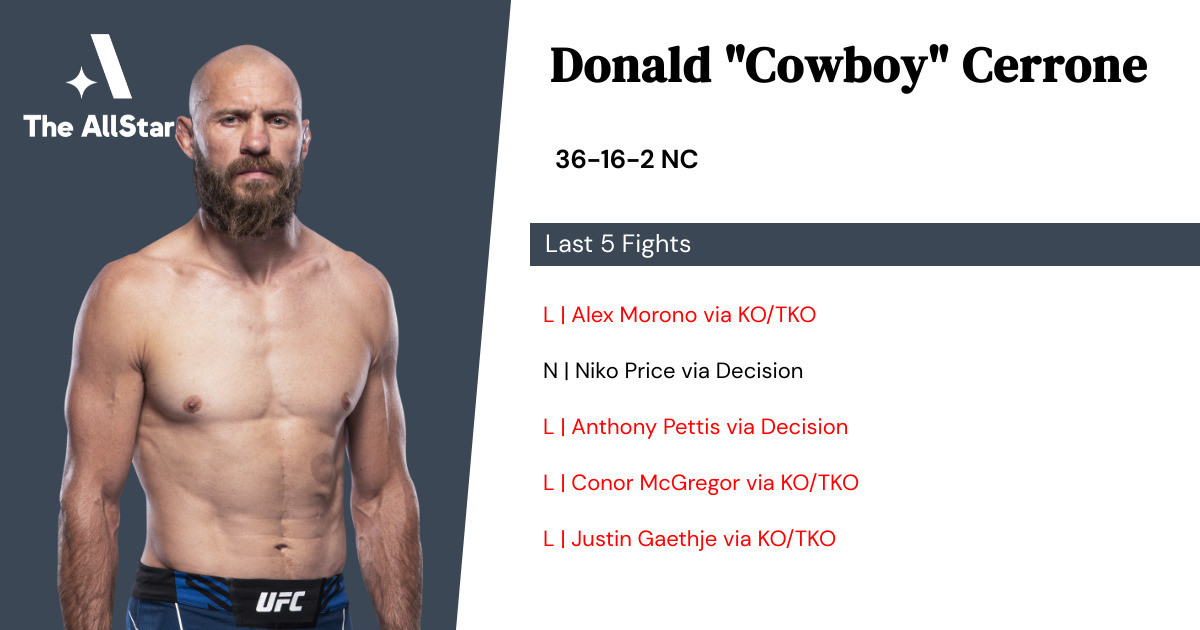 Joe Lauzon has a 93% finish rate, including 9 by knockout, 19 by submission, 2 by decision.

Joe Lauzon is looking to put together a winning streak, having last beaten Jonathan Pearce at UFC on ESPN 6: Reyes vs. Weidman.

Donald Cerrone vs Joe Lauzon is set to go down at UFC 274 – Oliveira vs. Gaethje. The fight is expected to start at around 11:00pm EST on Saturday 7th May 2022.

ESPN+ is the best option to live stream Donald Cerrone vs Joe Lauzon if you live in the United States. Outside of the USA, the best option is to register for UFC Fight Pass.

Where can I get the best odds for the Donald Cerrone vs Joe Lauzon UFC fight?

Use the AllStar’s directory to find the best sportsbooks and recommendations on where to place UFC bets online. If you just want to play for fun, head over to to our Fantasy UFC picks app to make your fight predictions for Donald Cerrone vs Joe Lauzon totally FREE.