Dustin Jacoby continued his impressive return to the UFC with a unanimous decision victory over Michal Oleksiejczuk in March.

Da Un Jung made it two wins in a row following a standing TKO victory against Kennedy Nzechukwu last November.

Dustin Jacoby opened as a -145 betting favorite. Placing a bet on Jacoby means you would need to bet $145 in order to win $100.

This Light Heavyweight matchup will be on the prelims at UFC Fight Night: Ortega vs. Rodriguez.

Dustin Jacoby is on a three-fight winning streak after defeating Michal Oleksiejczuk at UFC 272 to follow wins over John Allan and Darren Stewart.

Jacoby has won five of his last six UFC fights since his return to the promotion. The only blip on his record during this time is a split decision draw against Ion Cutelaba.

Jung has won four of his five UFC appearances, including stoppage victories over Khadis Ibragimov and Mike Rodriguez.

Both of these fighters are well-matched in the height and reach department.

Dustin Jacoby is the older man at 34, while his opponent is 28 years old. Jacoby has 23 pro fights on his record compared to Jung’s 18.

WELCOME BACK DUSTIN JACOBY!!@thehanyakdj wastes NO time getting the finish tonight #UFCVegas12 pic.twitter.com/GDuPZwWQNy

The stats show that Da Un Jung frequently mixes in the takedowns with 2.60 TDs per 15 minutes to Jacoby’s 0.39.

Dustin Jacoby has proved a big hit since returning to the UFC after an unsuccessful spell in 2011. The American hasn’t lost an MMA fight since 2015 and has won five from six in the past two years.

Da Un Jung is another rising star who also hasn’t lost since 2015. Don’t miss this matchup.

Da Un Jung has the chance to break into the UFC Light Heavyweight Top 15 rankings if he can defeat #15 ranked Dustin Jacoby.

This is a big fight between two rising contenders in the 205lbs division.

The oddsmakers’ predictions have Dustin Jacoby as the slight betting favorite with opening odds of -145.

Dustin Jacoby made his predictions during an interview with The AllStar:

Get your Dustin Jacoby vs Da Un Jung picks in.

Dustin Jacoby vs Da Un Jung tale of the tape 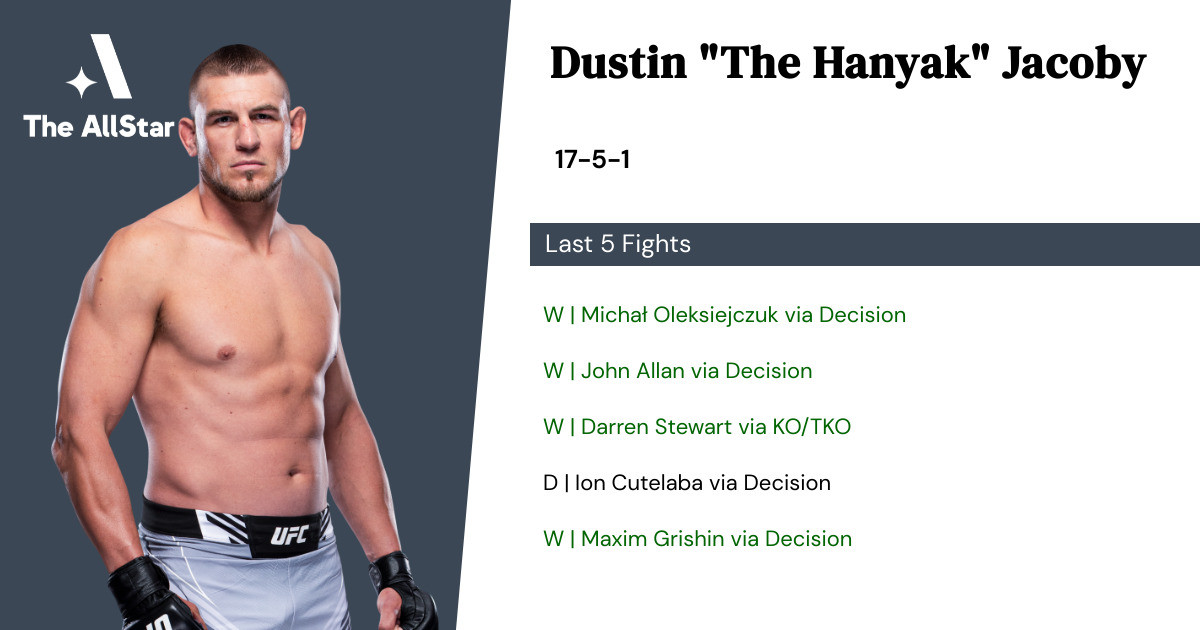 Dustin Jacoby has a 65% finish rate, including 10 by knockout, 1 by submission, 6 by decision. 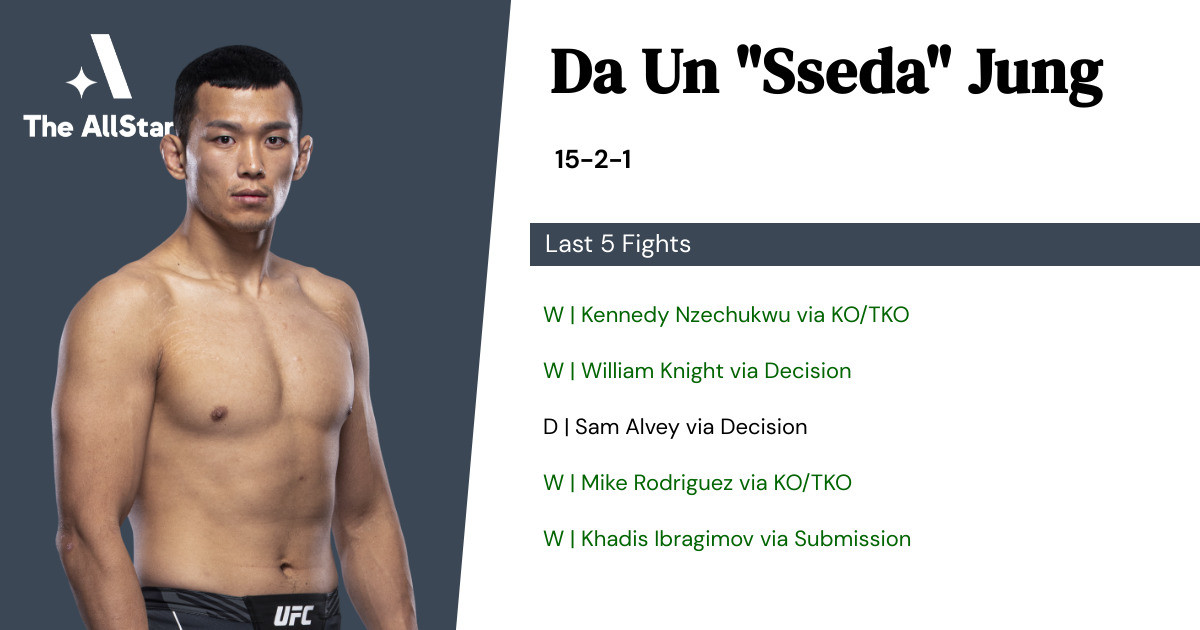 Dustin Jacoby vs Da Un Jung is set to go down at UFC Fight Night – Ortega vs. Rodriguez. The fight is expected to start at around 12:00pm EST on Saturday 16th July 2022.

ESPN+ is the best option to live stream Dustin Jacoby vs Da Un Jung if you live in the United States. Outside of the USA, the best option is to register for UFC Fight Pass.

Where can I get the best odds for the Dustin Jacoby vs Da Un Jung UFC fight?

Use the AllStar’s directory to find the best sportsbooks and recommendations on where to place UFC bets online. If you just want to play for fun, head over to to our Fantasy UFC picks app to make your fight predictions for Dustin Jacoby vs Da Un Jung totally FREE.