Dustin Jacoby vs Michal Oleksiejczuk is set to go down at UFC 272: Covington vs. Masvidal at 6:00pm EST on Saturday 5th March 2022 in a 205lbs matchup.

Dustin Jacoby has 4 UFC wins over the last 18 months after earning a contract on Dana White’s Contender Series.

Michal Oleksiejczuk is riding a two-fight win streak after victories over Modestas Bukauskas and Shamil Gamzatov.

Dustin Jacoby will be the betting favorite with opening odds of -190.

Michal Oleksiejczuk is the betting underdog with opening odds of +170.

This fight will take place on the prelims of UFC 272 at Light Heavyweight.

Dustin Jacoby has won 4 of his last 5 fights, the other being a split decision draw with Ion Cutelaba. Jacoby has fought 4 times in 2021, most recently in November with a win against John Allan.

WELCOME BACK DUSTIN JACOBY!!@thehanyakdj wastes NO time getting the finish tonight #UFCVegas12 pic.twitter.com/GDuPZwWQNy

Jacoby was signed by the UFC early in his career, losing both of his fights before being released. He was resigned after a successful showing on Dana White’s Contender Series and has gone unbeaten since.

Michal Oleksiejczuk bounced back from a two-fight skid with wins over Modestas Bukauskas and Shamil Gamzatov in the past 12 months.

RETURN OF THE LORD 😱

🇵🇱 Oleksiejczuk with a VICIOUS uppercut.

Oleksiejczuk suffered successive submission losses to Ovince St. Preux and Jimmy Crute after a promising start to his UFC career.

Dustin Jacoby will be the taller fighter at 6”3 compared to Michal Oleksiejczuk who is 6”0. He will also have a sizable 4-inch reach advantage.

Both fighters have remarkably similar stats, including 16 wins each as a pro. Their striking stats are also very similar.

These two fighters promise to put on an entertaining bout at Light Heavyweight. Both have strung together two wins and could have a big future in the division.

Either fighter could find themselves in the Top 15 with a victory in this fight. Jacoby will be eager to maintain his unbeaten return to the UFC. Oleksiejczuk, at just 26 years old, knows a win would put his name back on the map.

The oddsmakers’ predictions see Dustin Jacoby as the favorite with betting odds of -190. Jacoby has been predicted to win in each of his four UFC victories.

Get your Dustin Jacoby vs Michal Oleksiejczuk picks in.

Where to bet on Dustin Jacoby vs Michal Oleksiejczuk

Dustin Jacoby vs Michal Oleksiejczuk tale of the tape 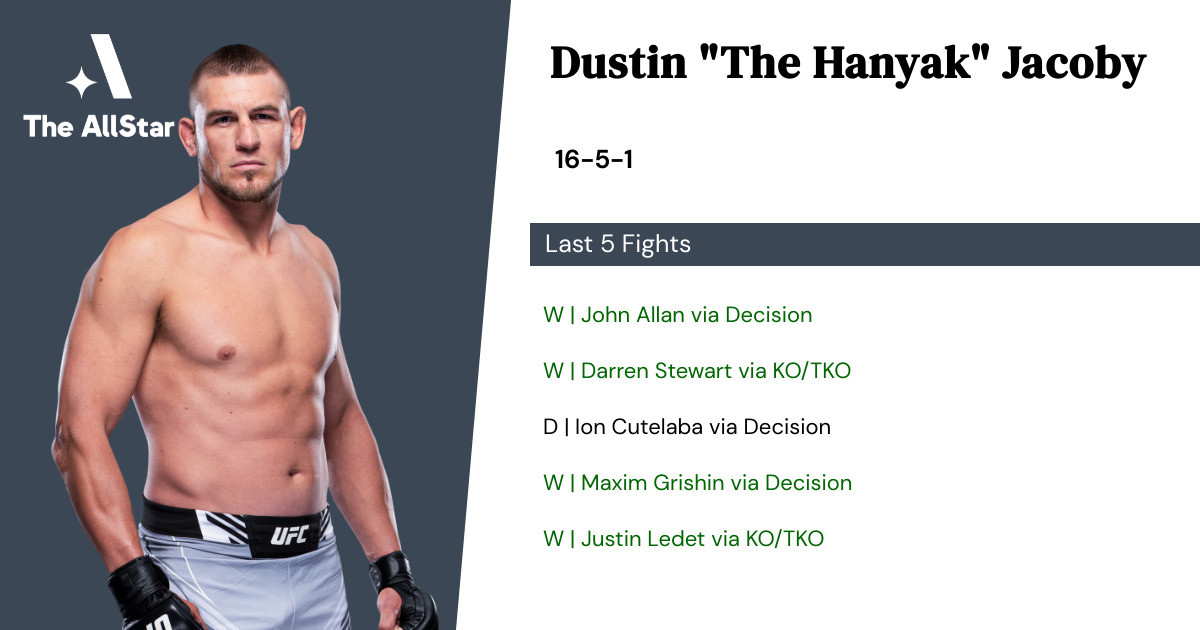 Dustin Jacoby has a 69% finish rate, including 10 by knockout, 1 by submission, 5 by decision. 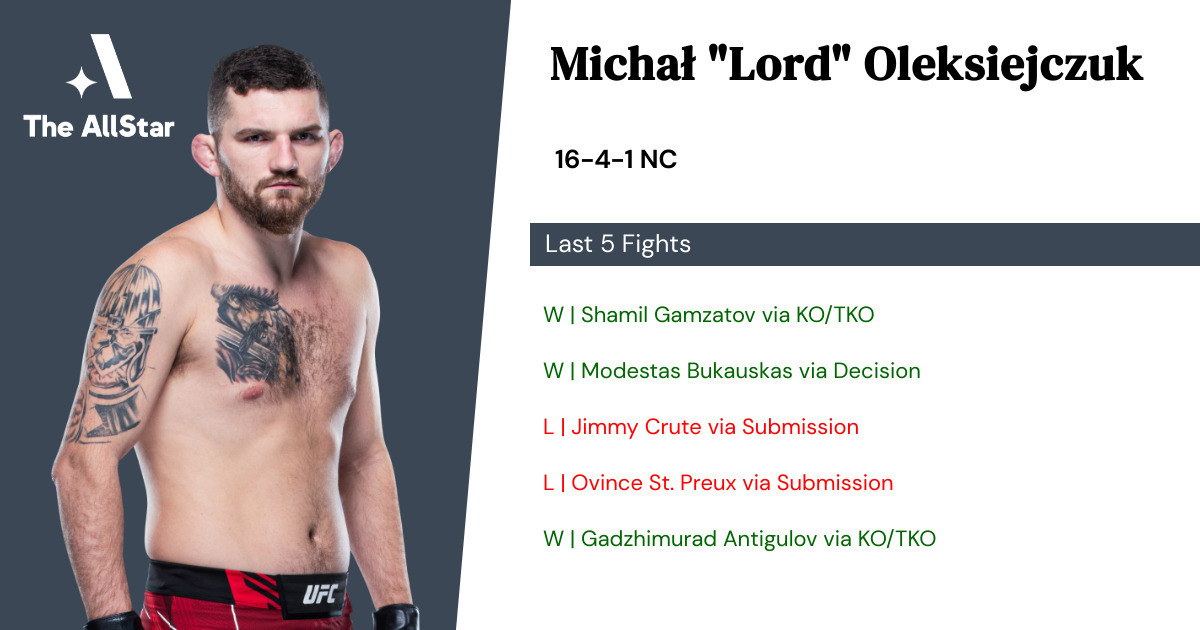 Michał Oleksiejczuk has a 75% finish rate, including 11 by knockout, 1 by submission, 4 by decision.

ESPN+ is the best option to live stream Dustin Jacoby vs Michal Oleksiejczuk if you live in the United States. Outside of the USA, the best option is to register for UFC Fight Pass.

Where can I get the best odds for the Dustin Jacoby vs Michal Oleksiejczuk UFC fight?