Frank Camacho vs Manuel Torres is set to go down at UFC Fight Night: Błachowicz vs. Rakić at 7:30pm EST on Saturday 14th May 2022 in a 155lbs matchup.

Frank Camacho will be returning to the Octagon after almost 2 years away since his knockout loss to Justin Jaynes.

Manuel Torres will be making his UFC debut after a successful showing on Dana White’s Contender Series in October.

Manuel Torres will be the betting favorite with opening odds of -150.

Frank Camacho is the betting underdog with opening odds of +135.

This fight is set to take place on the main card at UFC Fight Night: Błachowicz vs. Rakić.

Frank Camacho has suffered two consecutive first-round stoppage defeats in a row, with losses to Beneil Dariush and Justin Jaynes.

Manuel Torres made the most of his contender series opportunity with a first-round knockout victory over Kolton Englund.

The Mexican is on a three-fight winning streak, with all three victories coming by first-round finish.

Both of these fighters are 5”10 tall and will have an identical 73-inch reach.

Frank Camacho has over double the pro-MMA experience than his opponent with 31 pro fights to Torres’ 14.

Manuel Torres enters this fight on a three-fight winning streak, while Camacho is on a two-fight skid.

This fight will be a fascinating matchup between a UFC mainstay and a prospect on the rise. Frank Camacho has won just two of his seven UFC fights but boasts massive power in his hands.

Manuel Torres was one of the brightest stars on the latest season of Dana White’s Contender Series and could make an explosive introduction to his UFC career.

The stakes are big for both fighters with their UFC careers on the line.

Another defeat for Frank Camacho would probably spell the end of his UFC career.

For Torres, a successful debut over an experienced fighter like Camacho will do wonders for him.

The oddsmakers’ predictions see Manuel Torres as the slight betting favorite with opening odds of -150.

Get your Frank Camacho vs Manuel Torres picks in.

Frank Camacho vs Manuel Torres tale of the tape 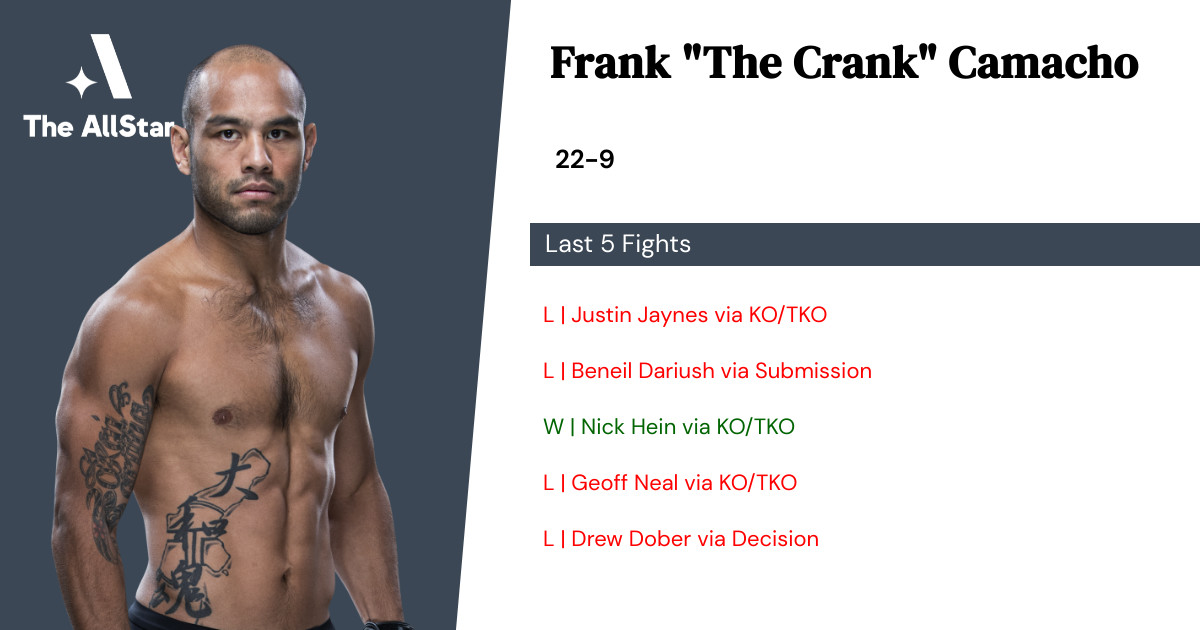 Frank Camacho has a 87% finish rate, including 16 by knockout, 3 by submission, 3 by decision.

Frank Camacho is currently on a 2 fight losing skid.

Frank Camacho vs Manuel Torres is set to go down at UFC Fight Night – Błachowicz vs. Rakić. The fight is expected to start at around 7:30pm EST on Saturday 14th May 2022.

ESPN+ is the best option to live stream Frank Camacho vs Manuel Torres if you live in the United States. Outside of the USA, the best option is to register for UFC Fight Pass.

Where can I get the best odds for the Frank Camacho vs Manuel Torres UFC fight?

Use the AllStar’s directory to find the best sportsbooks and recommendations on where to place UFC bets online. If you just want to play for fun, head over to to our Fantasy UFC picks app to make your fight predictions for Frank Camacho vs Manuel Torres totally FREE.