Glover Teixeira vs Jiri Prochazka is set to go down at UFC 275: Teixeira vs. Procházka at 11:00pm EST on Saturday 11th June 2022 in a UFC Light Heavyweight Championship matchup.

Glover Teixeira became one of the oldest champions in UFC history after defeating Jan Blachowicz at UFC 267.

Jiri Prochazka opened as a -195 betting favorite. Placing a bet on Prochazka means you would need to bet $195 in order to win $100.

This five-round bout will be the headliner at UFC 275 in Singapore, with the UFC Light Heavyweight belt on the line.

Glover Teixeira made it six wins in a row when he defeated the champion Jan Blachowicz with a second-round rear-naked choke in October.

The Brazilian realized his dream of becoming a champion just two days after his 42nd birthday. Texeira’s run to the belt included stoppage victories over Ion Cutelaba, Anthony Smith and Thiago Santos.

Jiri Prochazka made it 2-0 in the UFC with a sensational spinning elbow KO over Dominick Reyes. His UFC debut ended with a second-round knockout against Volkan Oezdemir.

The Czech is currently riding a 12-fight winning streak, 11 of which have ended by knockout. Prochazka hasn’t lost a fight since 2015.

Jiri Prochazka will be the slightly taller fighter at 6”3 compared to Teixeira who is 6”2. The Czech will have a significant 4-inch reach advantage in this fight.

Glover Texeira is much older than his opponent at 42, while Prochazka is still only 29.

The stats reveal that Texeira integrates grappling into his game more frequently with 2.11 TDs per 15 minutes.

This is one of the most exciting Light Heavyweight title matchups in recent years. Jiri Prochazka has steamrolled his way to a title shot after just two fights in the UFC.

The Czech’s gung-ho striking style always makes for an exhilarating fight. Glover Teixeira will likely look to his grappling superiority to seal the victory.

This fight is as big as it gets for both men, who will be contesting the UFC 205lbs belt.

Glover Teixeira has revealed that he plans two more fights before retiring, while Prochazka is just two fights into his UFC career.

The oddsmakers’ predictions have Jiri Prochazka as the betting favorite with opening odds of -195.

“Prochazka is a wild man and he can take a shot. But how will he do on the ground? I think Glover has an advantage there.”

“I’m gonna have to go with Jiri. I think he’ll get Glover out there early. Jiri is going to be very explosive, dangerous and unpredictable.”

Get your Glover Teixeira vs Jiri Prochazka picks in.

Glover Teixeira vs Jiri Prochazka tale of the tape 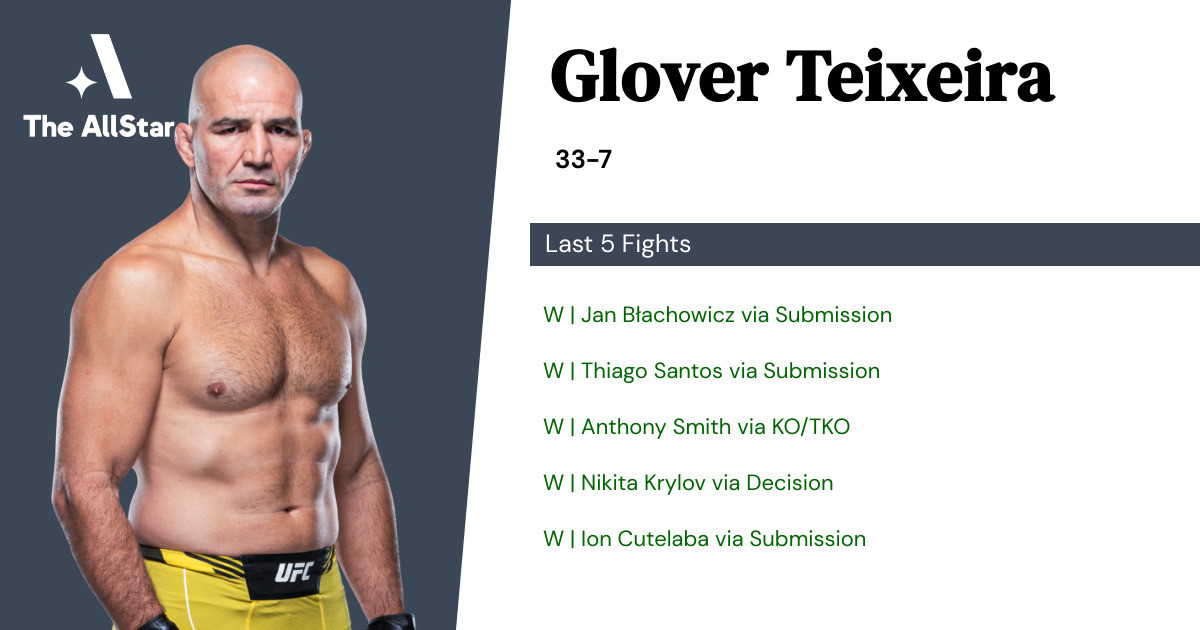 Glover Teixeira has a 85% finish rate, including 17 by knockout, 11 by submission, 5 by decision. 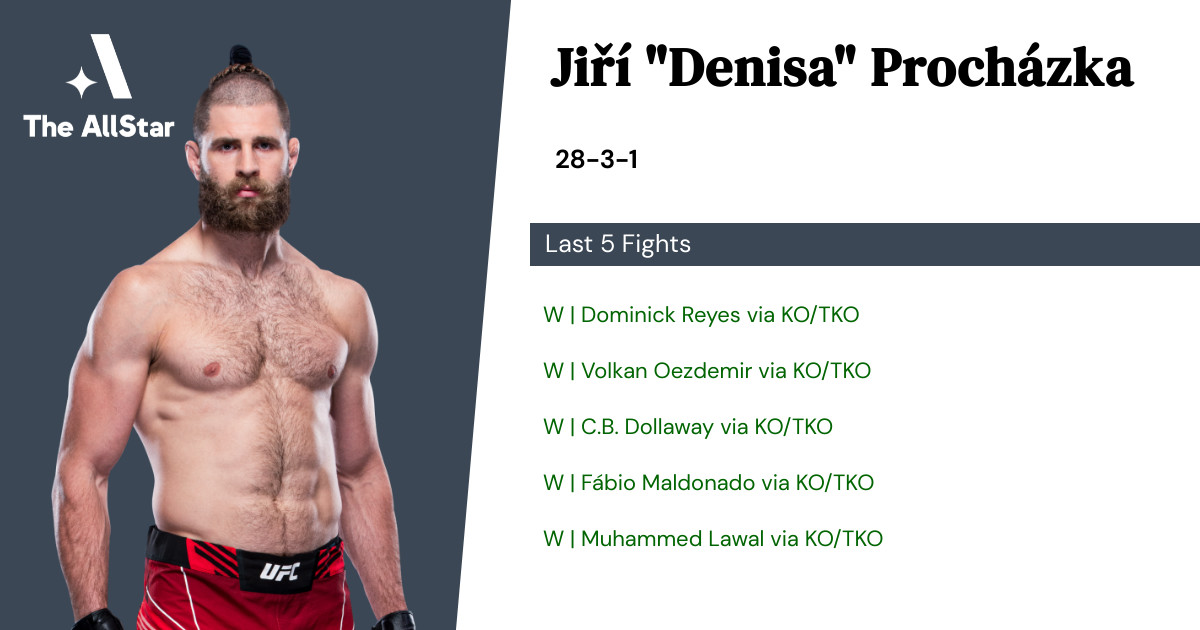 Jiří Procházka has a 97% finish rate, including 25 by knockout, 2 by submission, 1 by decision.

Glover Teixeira vs Jiri Prochazka is set to go down at UFC 275 – Teixeira vs. Procházka. The fight is expected to start at around 11:00pm EST on Saturday 11th June 2022.

ESPN+ is the best option to live stream Glover Teixeira vs Jiri Prochazka if you live in the United States. Outside of the USA, the best option is to register for UFC Fight Pass.

Where can I get the best odds for the Glover Teixeira vs Jiri Prochazka UFC fight?

Use the AllStar’s directory to find the best sportsbooks and recommendations on where to place UFC bets online. If you just want to play for fun, head over to to our Fantasy UFC picks app to make your fight predictions for Glover Teixeira vs Jiri Prochazka totally FREE.