Irene Aldana demolished Yana Kunitskaya in her last UFC appearance at UFC 264, stopping the Russian in Round 1.

Aspen Ladd is coming off a defeat to Norma Dumont in October. The American is 1-2 in her last three fights.

Irene Aldana will be the betting favorite with opening odds of -190.

Aspen Ladd is the betting underdog with opening odds of +170.

This fight is expected to take place on the prelims at UFC 273: Volkanovski vs Korean Zombie.

Irene Aldana bounced back from a decision loss to Holly Holm by battering Yana Kunitskaya. Aldana finished the fight via ground-and-pound in Round 1.

The Mexican has won three of her last four and now sits at #3 in the UFC Women’s Bantamweight Division rankings.

Aspen Ladd contested her last fight against Norma Dumont at 145lbs after experiencing weight-cutting issues during a scheduled matchup with Macy Chiasson.

Ladd is now 4-2 in the UFC and has lost two of her last three fights. Three of her four UFC victories have come by way of stoppage.

Irene Aldana is the taller woman at 5”9, compared to Aspen Ladd who is 5”6. Aldana will also have a 2-inch reach advantage in this fight.

Aspen Ladd is considerably younger at 27 years old, while Aldana is 33.

The stats show significant differences in styles between these two fighters. Ladd attempts far more takedowns than her opponent, while Aldana’s striking output is significantly higher than Ladd.

This is a fascinating matchup between two of the most talented fighters in the UFC Women’s Bantamweight Division.

The stakes are massive in this fight, which matches up #3 vs #4 in the division. A big win for Aldana could place her next in line for a championship fight, while a victory for Ladd would put her right back in the title picture.

The bookmakers’ predictions have Irene Aldana as the favorite with betting odds of -190.

Get your Irene Aldana vs Aspen Ladd picks in.

Irene Aldana vs Aspen Ladd tale of the tape

Aspen Ladd has the better record against the shared opposition, at 2-0 to Irene Aldana’s record of 1-1 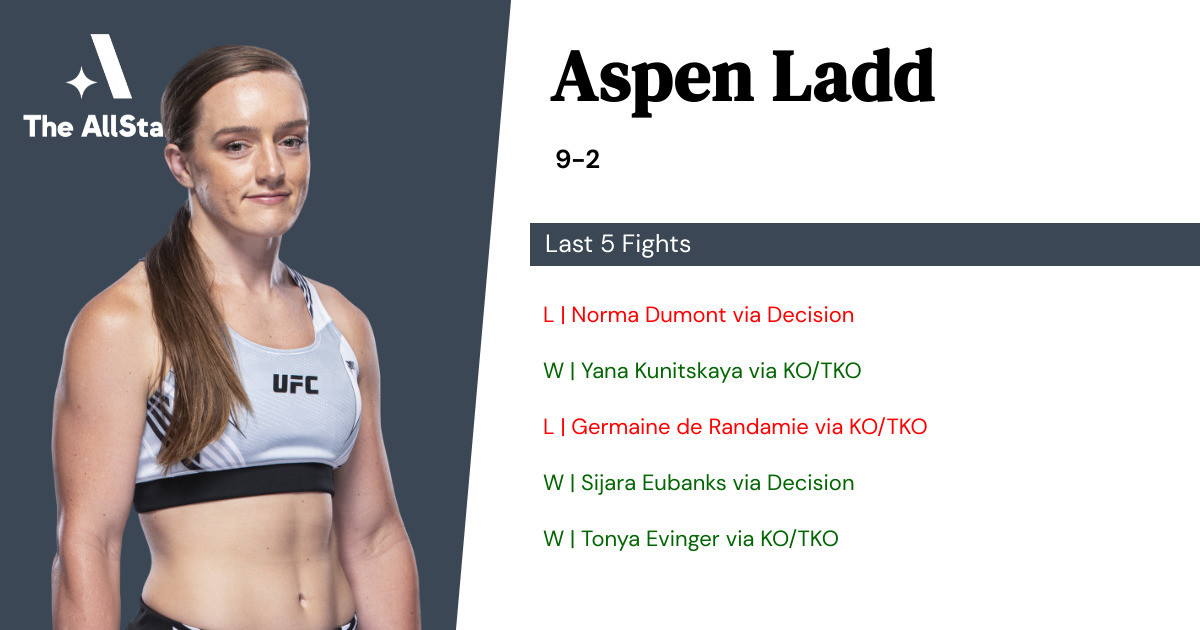 Aspen Ladd has a 78% finish rate, including 6 by knockout, 1 by submission, 2 by decision.

Aspen Ladd is looking to get back to winning ways after a loss at the hands of Norma Dumont at UFC Fight Night: Ladd vs. Dumont. 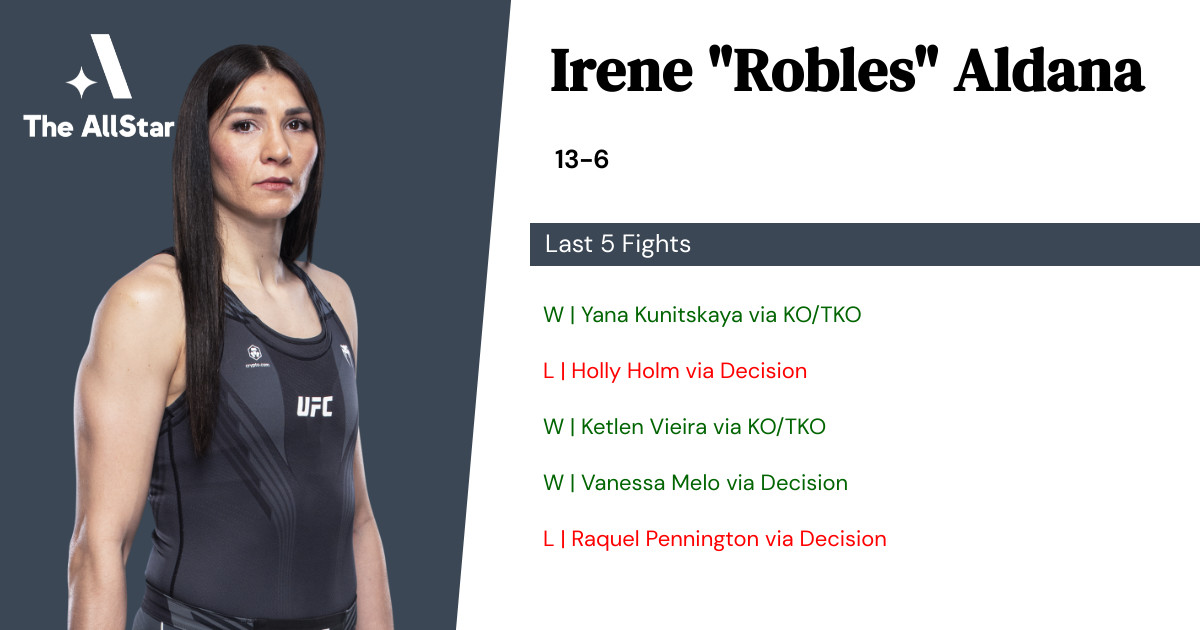 Irene Aldana has a 77% finish rate, including 7 by knockout, 3 by submission, 3 by decision.

Irene Aldana is looking to put together a winning streak, having last beaten Yana Kunitskaya at UFC 264: Poirier vs. McGregor 3.

Irene Aldana vs Aspen Ladd is set to go down at UFC 273 – Volkanovski vs. Korean Zombie. The fight is expected to start at around 9:00pm EST on Saturday 9th April 2022.

ESPN+ is the best option to live stream Irene Aldana vs Aspen Ladd if you live in the United States. Outside of the USA, the best option is to register for UFC Fight Pass.

Where can I get the best odds for the Irene Aldana vs Aspen Ladd UFC fight?

Use the AllStar’s directory to find the best sportsbooks and recommendations on where to place UFC bets online. If you just want to play for fun, head over to to our Fantasy UFC picks app to make your fight predictions for Irene Aldana vs Aspen Ladd totally FREE.