Israel Adesanya vs Robert Whittaker is set to go down at UFC 271: Adesanya vs. Whittaker 2 at 11:30pm EST on Saturday 12th February 2022 in a UFC Middleweight Championship matchup.

Israel Adesanya is one of the UFC’s most dominant champions, defending his Middleweight belt a total of 3 times. Having already knocked out Robert Whittaker in their first fight, Adesanya last defended his title against Marvin Vettori at UFC 263.

Since losing his title to Adesanya, Robert Whittaker has won all three of his fights. His most recent win came against Kelvin Gastelum in an impressive five-round display.

Israel Adesanya is the oddsmakers’ choice as a -260 betting favorite. Placing a bet on Adesanya means you would need to bet $260 in order to win $100.

In their first fight, Adesanya opened as the +160 underdog, while Whittaker’s opening odds were -185. Given the champion’s dominance at 185lbs, the betting odds now strongly favor Adesanya for this rematch.

A rematch between Adesanya and Whittaker had long been in the works before it was officially announced on December 12, 2021, by the UFC.

While there was plenty of animosity leading up to their first fight, both competitors have remained relatively quiet in the lead-up to this rematch.

Israel Adesanya has seen off every Middleweight opponent he has faced during his time in the UFC, racking up a 10-0 record at 185lbs. He won a dominant decision against Marvin Vettori in his last defence.

His other two successful title defences came against undefeated rising star Paulo Costa via KO and a unanimous decision against Yoel Romero.

With just one career loss to former champion Jan Blachowizc at 205lbs, Adesanya is undefeated at Middleweight.

Robert Whittaker responded well to his knockout loss against Adesanya by winning three on the trot. He secured unanimous decision victories against Darren Till, Jared Cannonier and Kelvin Gastelum to earn his shot at the belt.

Whittaker won the interim Middleweight belt against Yoel Romero at UFC 213 before he was promoted to undisputed champion. Prior to his loss against Adesanya, Whittaker was on an 8-fight winning streak at 185lbs.

Adesanya is considerably taller than Whittaker at 6”4 and will also have a huge reach advantage of 6.5-inches. Whittaker is 5”11 and has a reach of 73.5 inches.

This rematch has been spoken about for a long time, with many experts believing Whittaker has the all-round game capable of dethroning the champion.

Adesanya is one of the most elite strikers ever seen in the Octagon. With a diverse arsenal of punches and kicks, ‘The Last Stylebender’ poses a threat every second of the fight.

Adesanya drops Whittaker as the horn sounds in round 1! Wow! #UFC243 pic.twitter.com/lR0ss8amj8

Whittaker is extremely tough and brings an unorthodox Karate style to the Octagon. He has strong grappling skills which could challenge Adesanya, who will prefer a standing fight.

The Middleweight title isn’t the only thing on the line at UFC 271. This fight is a chance for Whittaker to avenge his loss to Adesanya in front of a 57,000 crowd at UFC 243.

Adesanya will be looking to make it four defences in a row in his Middleweight reign. He is still a way off Anderson Silva’s record of 10 defences but will cement his position as his era’s standout 185-champion.

The bookies’ predictions have Israel Adesanya as the clear favorite at -260.

“I don’t see anybody that can win and challenge Israel in the 185lbs weight class.”

“I think Israel wins again. We see how the first fight looks. I think it’s going to be a similar way.”

During the weigh-ins before the fight, Adesanya predicted his opponent will be more cautious this time around:

“Whittaker is no slouch. I’m expecting a different fight. Way more competitive than the last one.”

On James Lynch’s ‘Pro’s Picks’ feature, 16 fighter picks went to the champion Adesanya, while just the one pick from Jordan Wright went in favor of Robert Whittaker.

Plenty of active UFC fighters have made their picks on this matchup. Fighters picking Whittaker include Daniel Cormier and Kelvin Gastelum, who has fought and lost to both men.

Fighters who pick Adesanya include Anthony Smith and Calvin Kattar, who dubbed Adesanya as a “different breed.”

Get your Adesanya vs Whittaker 2 picks in.

Where to bet on Israel Adesanya vs Robert Whittaker

Israel Adesanya vs Robert Whittaker tale of the tape

Robert Whittaker has the better record against the shared opposition, at 5-0 to Israel Adesanya’s record of 4-0 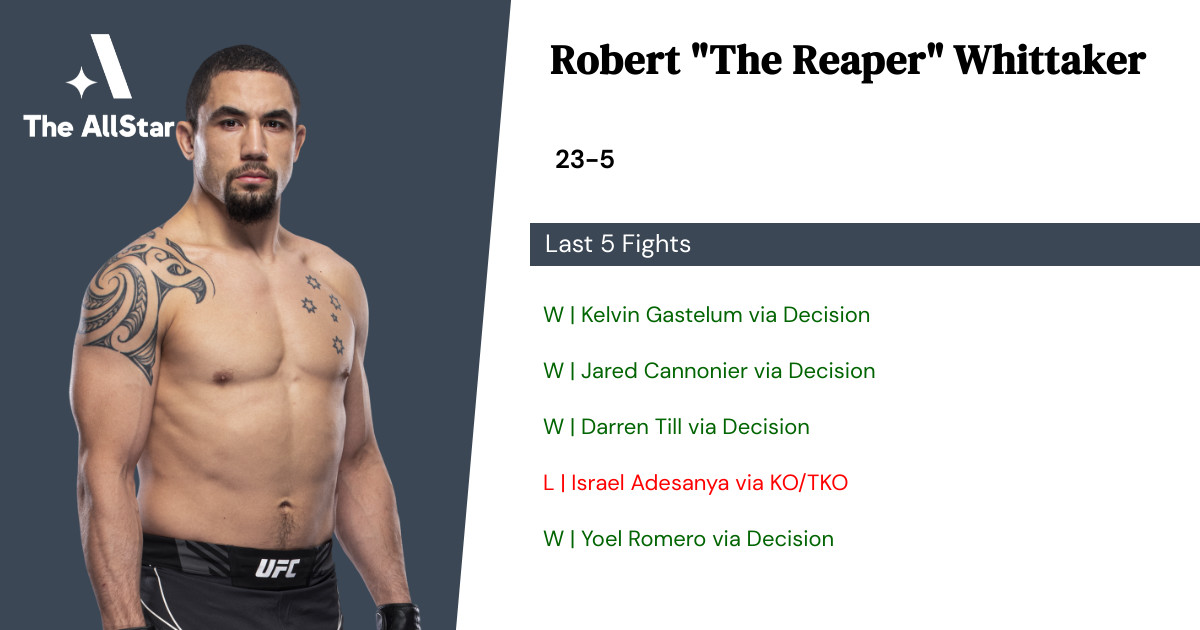 Robert Whittaker has a 61% finish rate, including 9 by knockout, 5 by submission, 9 by decision. 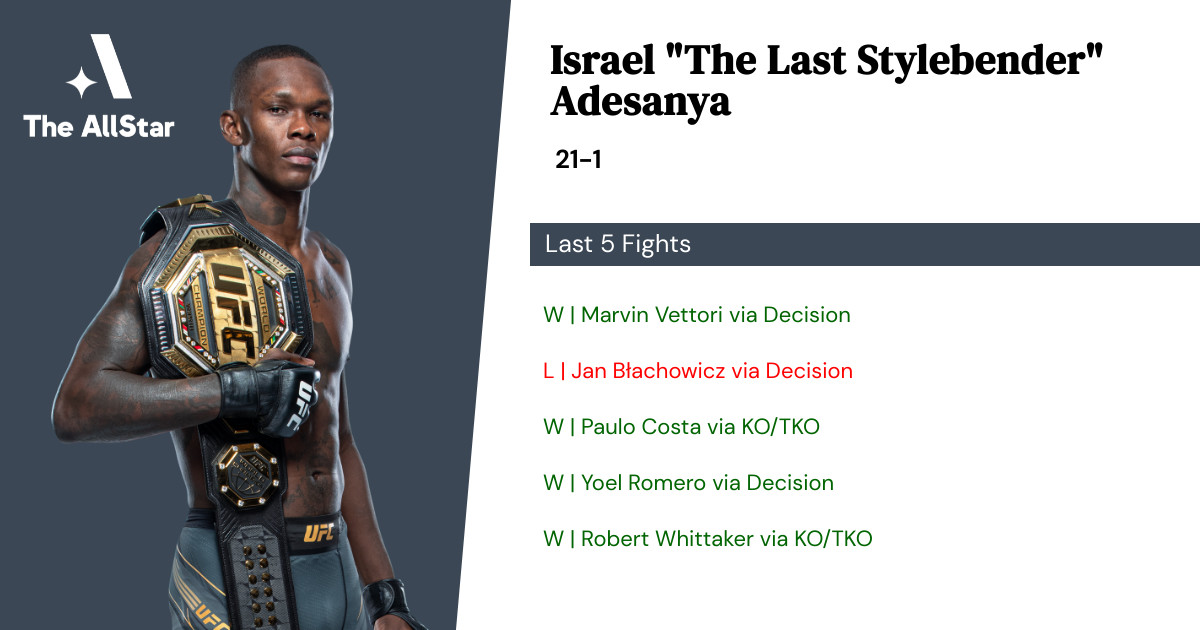 Israel Adesanya has a 72% finish rate, including 15 by knockout, 6 by decision.

Israel Adesanya is looking to put together a winning streak, having last beaten Marvin Vettori at UFC 263: Adesanya vs. Vettori 2.

Israel Adesanya vs Robert Whittaker is set to go down at UFC 271 – Adesanya vs. Whittaker 2. The fight is expected to start at around 11:30pm EST on Saturday 12th February 2022.

ESPN+ is the best option to live stream Israel Adesanya vs Robert Whittaker if you live in the United States. Outside of the USA, the best option is to register for UFC Fight Pass.

Where can I get the best odds for the Israel Adesanya vs Robert Whittaker UFC fight?