Jared Vanderaa vs Chase Sherman is set to go down at UFC Fight Night: Dos Anjos vs. Fiziev at 5:00pm EST on Saturday 9th July 2022 in a 265lbs matchup.

Chase Sherman has dropped his last four fights after losing to rising contender Alexandr Romanov by submission in April.

Jared Vanderaa will be the betting favorite with opening odds of -200.

Chase Sherman is the betting underdog with opening odds of +180.

This Heavyweight matchup will be on the main card at UFC Fight Night: Dos Anjos vs. Fiziev.

Jared Vanderaa is looking to return to the win column having lost three fights in a row to Alexandr Romanov, Andrei Arlovski and Aleksei Oleinik.

The Mountain! ⛰ @JaredVanderaa back in the win column after going the distance. #UFCVegas27

Vanderaa’s sole UFC win came via unanimous decision against Justin Tafa in May 2021. Since his first-round knockout win on Dana White’s Contender Series, Vanderaa has gone 1-4 in the promotion.

Chase Sherman has lost four fights on the trot, with his last two defeats coming by first-round submission against Jake Collier and Alexandr Romanov.

Sherman is in his second UFC stint having debuted back in 2016. His return to the promotion ended with a stoppage victory over Ike Villanueva in May 2020.

Both of these fighters are 6”4, although it will be Jared Vanderaa with the slight 2-inch reach advantage.

Chase Sherman is two years older than his opponent and also possesses more professional fight experience with 25 fights to Vanderaa’s 20.

Jared Vanderaa and Chase Sherman are both very dangerous fighters on their day. This UFC heavyweight matchup could end in a moment given the power both men possess.

Given their respective losing streaks, Vanderaa and Sherman have everything at stake. A victory for either man will likely secure their position in the UFC, while defeat will probably be the end.

The oddsmakers’ predictions have Jared Vanderaa as the betting favorite with opening odds of -200.

Get your Jared Vanderaa vs Chase Sherman picks in.

Jared Vanderaa vs Chase Sherman tale of the tape

Both fighters have a record of 0-2 against the common opposition. 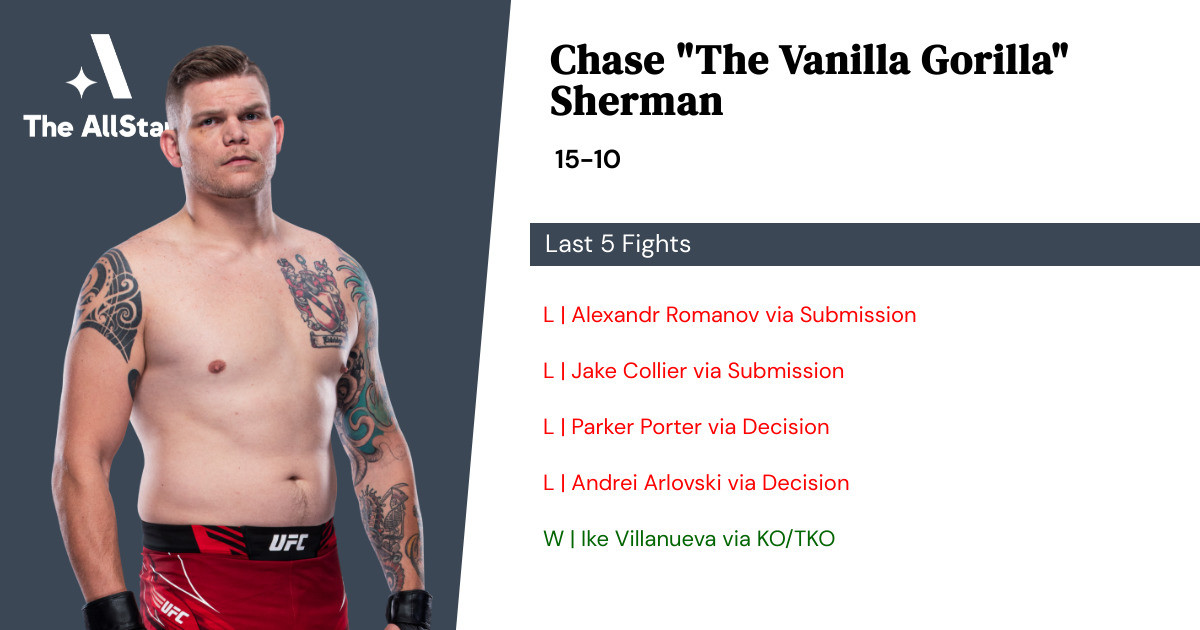 Chase Sherman has a 94% finish rate, including 14 by knockout, 1 by decision.

Chase Sherman is currently on a 4 fight losing skid. 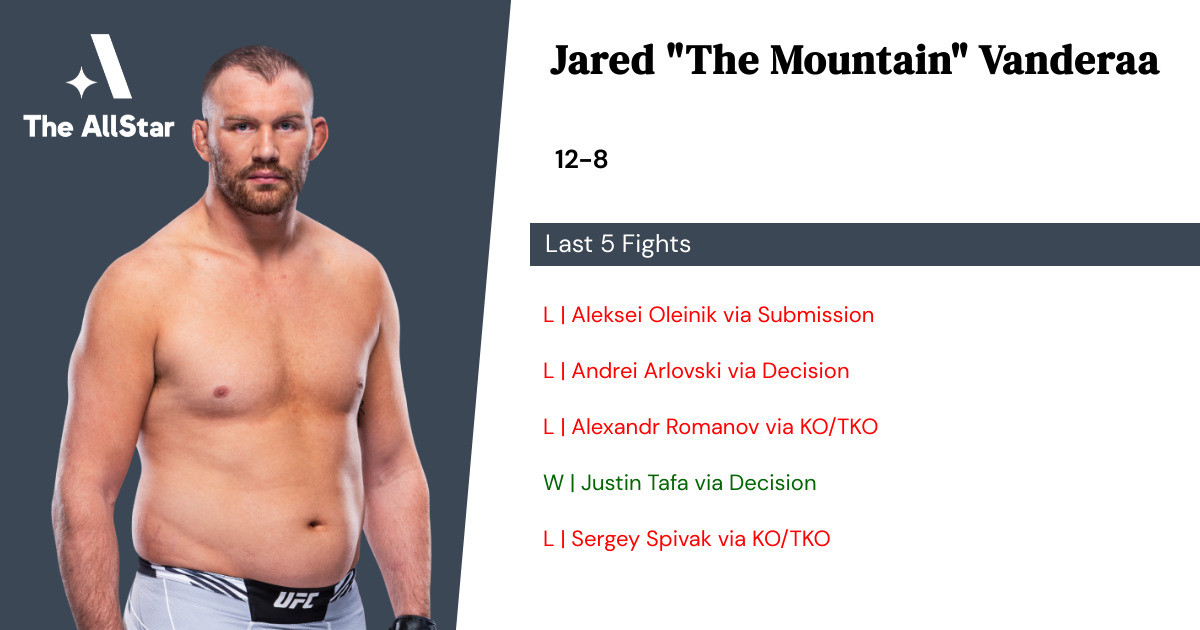 Jared Vanderaa has a 84% finish rate, including 7 by knockout, 3 by submission, 2 by decision.

Jared Vanderaa is currently on a 3 fight losing skid.

Jared Vanderaa vs Chase Sherman is set to go down at UFC Fight Night – Dos Anjos vs. Fiziev. The fight is expected to start at around 5:00pm EST on Saturday 9th July 2022.

ESPN+ is the best option to live stream Jared Vanderaa vs Chase Sherman if you live in the United States. Outside of the USA, the best option is to register for UFC Fight Pass.

Where can I get the best odds for the Jared Vanderaa vs Chase Sherman UFC fight?

Use the AllStar’s directory to find the best sportsbooks and recommendations on where to place UFC bets online. If you just want to play for fun, head over to to our Fantasy UFC picks app to make your fight predictions for Jared Vanderaa vs Chase Sherman totally FREE.