Jason Witt has had a stop-start UFC career since his debut in June 2020, alternating wins and losses. He edged a majority decision over a brutal three-round fight with Bryan Barbarena in his last Octagon performance.

Philip Rowe came back from his UFC debut defeat to Gabe Green with an impressive TKO victory over fellow DWCS graduate Orion Cosce.

Jason Witt vs Philip Rowe will take place on the undercard of UFC Vegas 47: Hermansson vs Strickland.

Jason Witt’s last fight in the Octagon was a barnburner against Bryan Barbarena. Although Barbarena outstruck Witt 96-93, Witt managed to secure eight takedowns and win the majority decision.

The slugfest you expected is happening! #UFCVegas33 pic.twitter.com/5gaayuGW2B

This will be Jason Witt’s fifth fight in the UFC. Both his losses have come by first-round KO, with his lone finish secured via arm-triangle choke against Cole Williams.

Philip Rowe upset the odds in his last fight with a second-round TKO against Orion Cosce. Rowe punished his opponent with strikes before finishing the fight with a right cross.

His UFC debut didn’t go his way, dropping a unanimous decision to Gabe Green. Most media outlet picks agreed, with 12 out of 17 in favor of Green.

Witt has far more fight experience with 26 professional fights, while Rowe has had 11.

In terms of significant strikes, Rowe lands at a rate of 4.97 per minute compared to Witt’s 2.63.

Jason Witt’s grappling-heavy approach shows in his 6.46 takedowns per 15 minutes. Rowe’s TD defence in the UFC is 50%.

Another classic stylistic matchup in the form of grappler vs striker. Philip Rowe has a 100% finish rate and puts his length to good use with slick striking skills. Expect sharp punches, knees and a knockout at any moment.

Jason Witt grinds his opponents down and looks for dangerous submissions, with eight career victories coming via submission. His last fight against Barbarena was a thriller, showing that Witt can trade with anyone on the feet.

Philip Rowe is an exciting striker and a Contender Series graduate looking to build himself in the UFC. Coming off a big win against a highly-touted prospect in Orion Cosce, Rowe can rise up the ranks with a statement win.

Jason Witt bounced back from a 16-second KO loss against Matt Semelsberger with a tough display against veteran Bryan Barbarena. Witt will be looking to string together his first win streak in his UFC career.

Jason Witt’s prediction is to outgrapple and “grind out” Rowe by using his superior ground game to his advantage. His ground-and-pound will prove a big factor in the fight.

“I hit pretty hard from short distances. I create a lot of power.”

On the MMA Hour, journalist Ariel Helwani picked this fight as one of his best bets. He picks Philip Rowe as the winner, notable due to his huge reach advantage and Witt’s susceptible chin in previous fights.

James Krause picks the underdog in Jason Witt, noting that his grappling is likely to win him the decision:

“If this fight goes the distance, I see Jason Witt getting the victory. As long as he doesn’t get clipped coming in.”

Where to bet on Jason Witt vs Philip Rowe

Jason Witt vs Philip Rowe tale of the tape 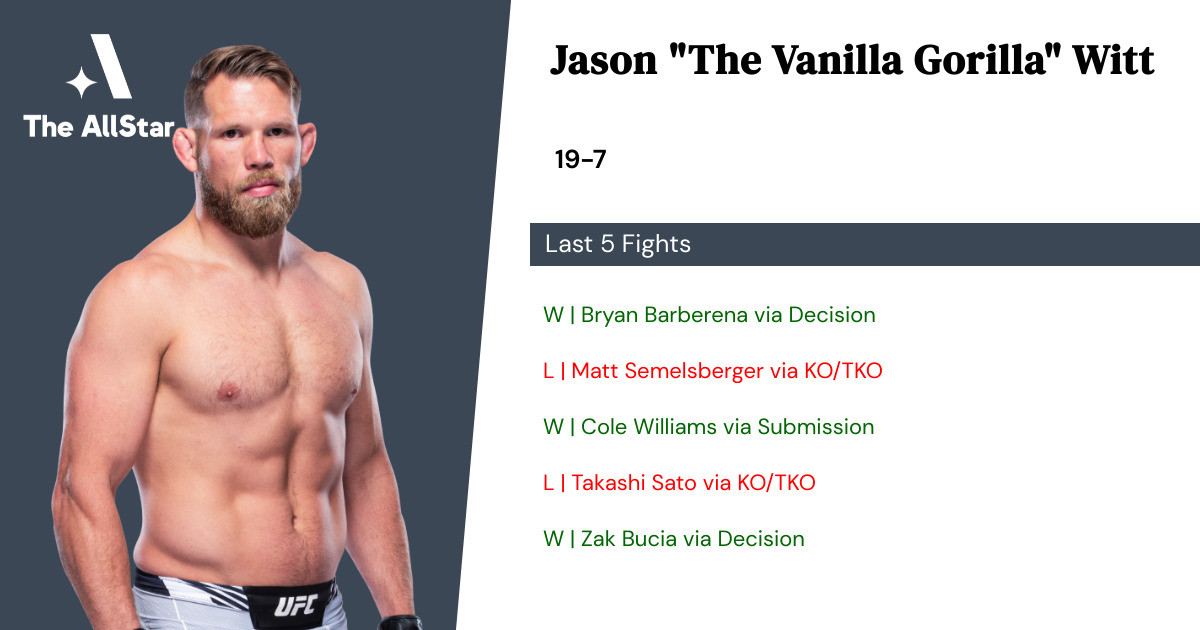 Jason Witt has a 64% finish rate, including 3 by knockout, 8 by submission, 7 by decision.

Jason Witt is looking to put together a winning streak, having last beaten Bryan Barberena at UFC Fight Night: Hall vs. Strickland. 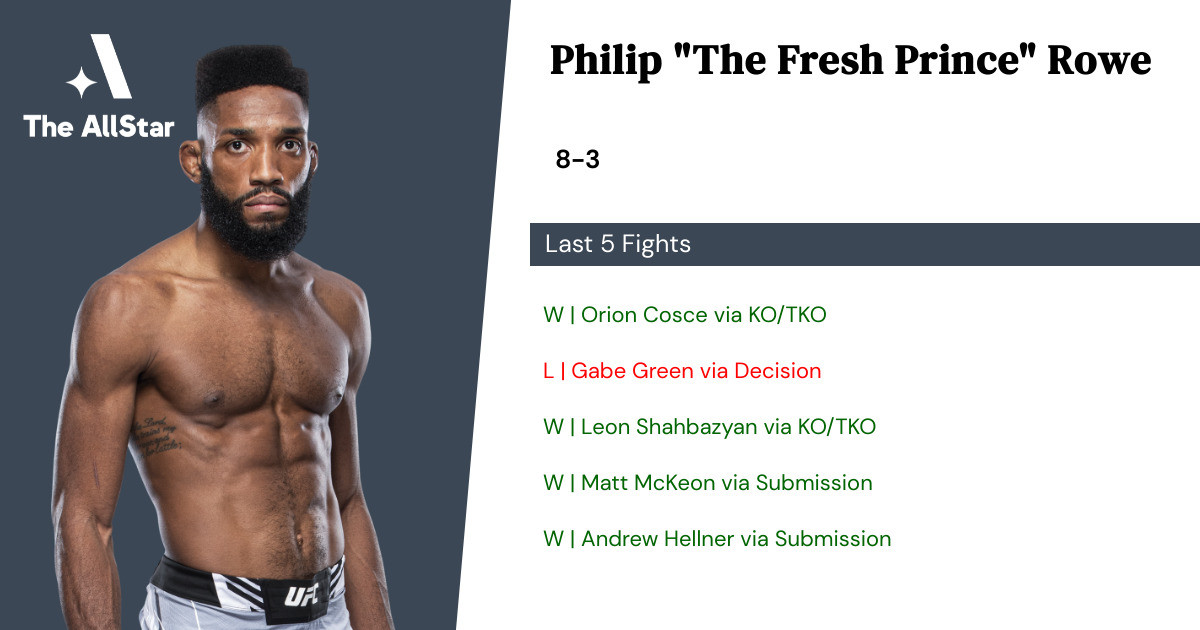 Philip Rowe has a 100% finish rate, including 4 by knockout, 4 by submission.

Philip Rowe is looking to put together a winning streak, having last beaten Jonathan Piersma at Fury Pro Grappling 3.

Jason Witt vs Philip Rowe is set to go down at UFC Vegas 47 – Hermansson vs. Strickland. The fight is expected to start at around 10:00pm EST on Saturday 5th February 2022.

ESPN+ is the best option to live stream Jason Witt vs Philip Rowe if you live in the United States. Outside of the USA, the best option is to register for UFC Fight Pass.

Where can I get the best odds for the Jason Witt vs Philip Rowe UFC fight?