Joe Solecki vs Alex da Silva is set to go down at UFC Fight Night: Volkov vs. Rozenstruik at 6:00pm EST on Saturday 4th June 2022 in a 155lbs matchup.

Joe Solecki suffered his first defeat in the UFC with a split decision loss to Jared Gordon in October.

Alex da Silva will be returning to the octagon after an 18-month layoff, with his last appearance ending in defeat to Brad Riddell.

Joe Solecki will be the betting favorite with opening odds of -250.

Alex da Silva is the betting underdog with opening odds of +190.

Joe Solecki was involved in a close fight with Jared Gordon last October, ultimately ending up on the wrong end of a split decision.

Safe to say Matt Wiman was NOT HAPPY with Joe Solecki 😬 pic.twitter.com/EFApCs6rVh

Solecki earned his shot in the UFC with a first-round submission victory on Dana White’s Contender Series in 2019. He had put together a streak of three wins in the promotion before his recent loss.

Alex da Silva last fought at UFC 253 in September 2020 against Brad Riddell. Despite winning the first round, he found himself out-struck by the veteran kickboxer.

Da Silva has lost two of his three UFC fights, with his only win in the promotion coming against Rodrigo Vargas in 2019.

Alex da Silva will be the taller fighter at 5”10 compared to Solecki who is 5”9. The Brazilian will also have a sizeable 3-inch reach advantage.

Joe Solecki is best known for his grappling, which could be countered by da Silva’s experienced jiu-jitsu game.

This will be a highly competitive matchup between two well-rounded fighters. With a 96% finish rate, Da Silva is extremely dangerous striking or grappling.

Solecki is more of a grappling specialist but is certainly capable of banging on the feet. This matchup could be one to watch for Fight of the Night.

Both men enter this fight off the back of a defeat, so there is a lot at stake. Solecki is 3-1 in the promotion, while da Silva is 1-2 and could be fighting for his future.

Check-in with The AllStar for the latest oddsmakers’ predictions on this fight.

Get your Joe Solecki vs Alex da Silva picks in.

Joe Solecki vs Alex da Silva tale of the tape 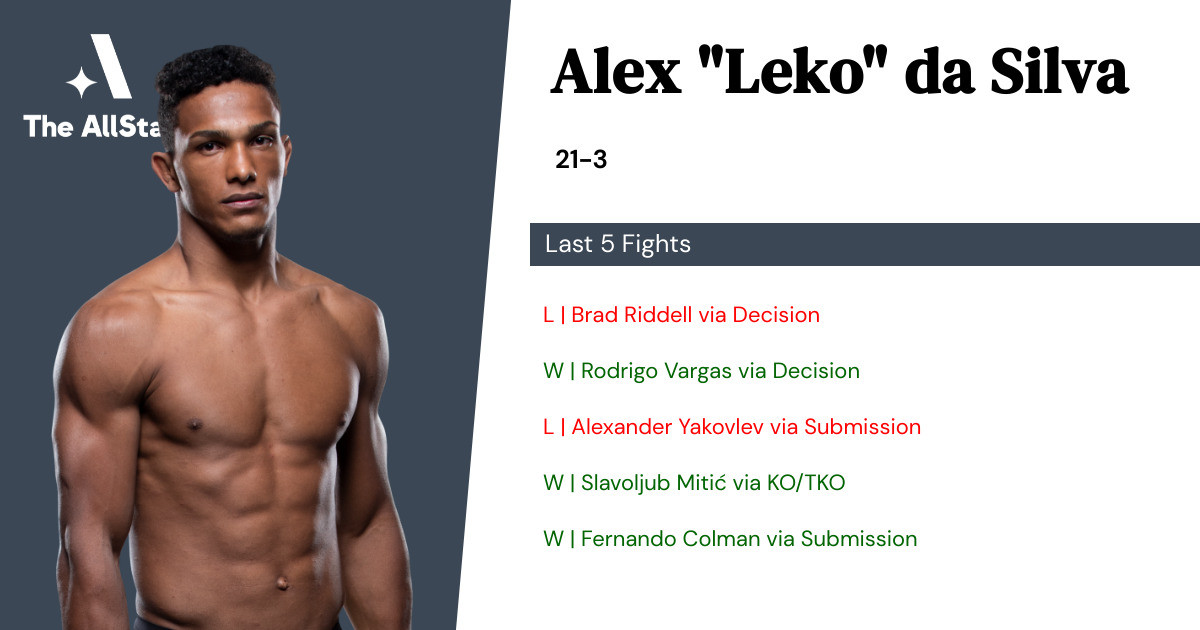 Alex da Silva has a 96% finish rate, including 13 by knockout, 7 by submission, 1 by decision.

Alex da Silva is looking to get back to winning ways after a loss at the hands of Brad Riddell at UFC 253: Adesanya vs. Costa. 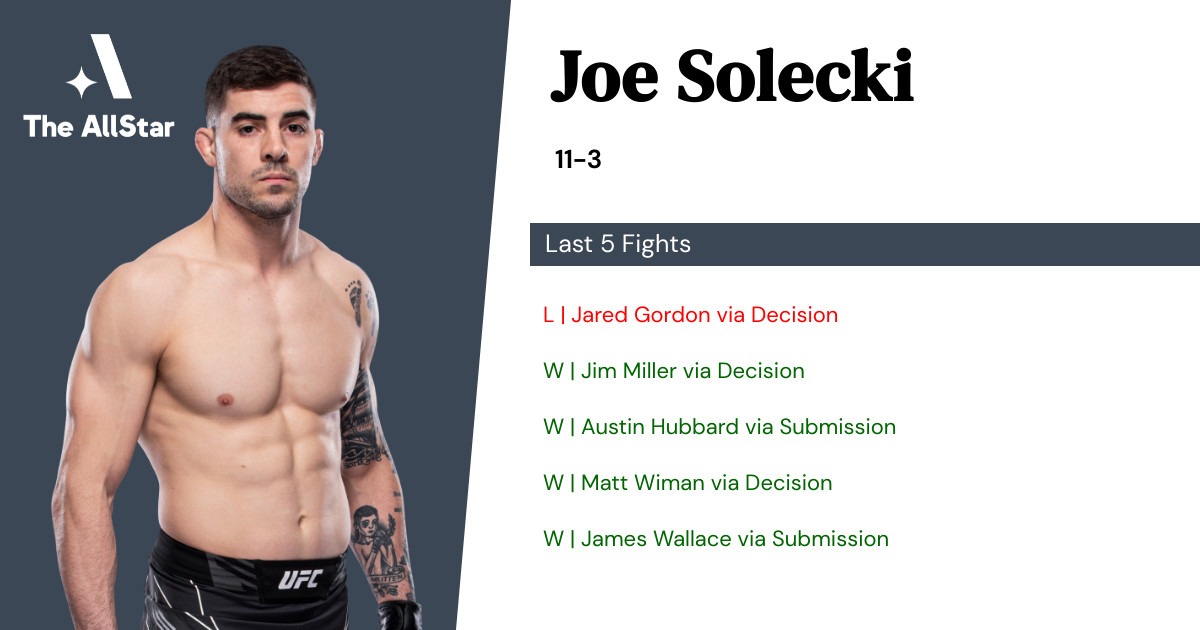 Joe Solecki has a 73% finish rate, including 1 by knockout, 7 by submission, 3 by decision.

Joe Solecki is looking to get back to winning ways after a loss at the hands of Donald Cerrone at Fury Pro Grappling 3.

Joe Solecki vs Alex da Silva is set to go down at UFC Fight Night – Volkov vs. Rozenstruik. The fight is expected to start at around 6:00pm EST on Saturday 4th June 2022.

ESPN+ is the best option to live stream Joe Solecki vs Alex da Silva if you live in the United States. Outside of the USA, the best option is to register for UFC Fight Pass.

Where can I get the best odds for the Joe Solecki vs Alex da Silva UFC fight?

Use the AllStar’s directory to find the best sportsbooks and recommendations on where to place UFC bets online. If you just want to play for fun, head over to to our Fantasy UFC picks app to make your fight predictions for Joe Solecki vs Alex da Silva totally FREE.