Initially scheduled as the co-main event, Walker vs Hill was promoted to the five-round main event after Dos Anjos and Fiziev pulled out.

Johnny Walker lost a close fight to Thiago Santos in his last UFC outing, putting him 1-3 in his last 4 fights. Walker’s last win came in September 2020 with a first-round TKO against Ryan Spann.

Jamahal Hill upset the odds in his last fight with a 48-second knockout win against Jimmy Crute. This marked a return to the win column for Hill after suffering his first career loss against Paul Craig.

Jamahal Hill opens this fight as the betting favorite with odds of -240. Johnny Walker will be the betting underdog with opening odds at +210.

News of a fight between Johnny Walker and Jamahal Hill was first reported on December 17th, although a date had not been fixed. On January 3rd, it was announced that the two would meet at UFC Vegas 48 on February 19th.

After Rafael dos Anjos vs Rafael Fiziev was moved to UFC 272, this bout became the new main event at UFC Vegas 48 and was bumped up to a five-round fight.

Johnny Walker’s last Octagon appearance was a disappointing one, dropping a unanimous 48-47 decision to fellow Brazilian Thiago Santos. 16 out of 17 major media outlet picks had the fight for Santos.

Walker’s UFC career got off to a spectacular start with three-straight first-round knockouts and performance bonuses. However, a knockout loss to Corey Anderson began a run of 3 defeats in 4 fights.

Jamahal Hill won by spectacular first-round knockout in his last UFC fight against Jimmy Crute in December. In his previous Octagon outing, Hill lost via TKO to Paul Craig and suffered a gruesome arm injury.

This was Hill’s first career loss. After a successful showing on Dana White’s Contender Series, Hill has gone 3-1-1(NC) in his UFC career.

Johnny Walker will be the taller fighter in this match at 6”6 tall, while Jamahal Hill is 6”4. Walker will have a 3-inch reach advantage with an 82-inch reach.

Walker is the significantly more experienced fighter with 24 pro fights on his record, while Hill has fought 11 times.

This main event is one of the most exciting Light Heavyweight matchups to make in the UFC. Both fighters are extremely dangerous fighters with multiple first-round knockouts on their UFC records. Expect an explosive stand-up fight with a knockout at any moment.

Pitting #12 vs #10 in the 205lbs rankings, this fight has big implications in the careers of both men and in the Light Heavyweight division.

Despite his setback against Paul Craig, there are high hopes for Jamahal Hill. The same can be said of Walker, who is looking to bounce back from the most disappointing run of his career.

The bookies’ predictions have Jamahal Hill as the clear favorite in this one. Many believe his speed and power will prove too much for Walker, who has proven hittable in his UFC career.

Get your Johnny Walker vs Jamahal Hill picks in.

Where to bet on Johnny Walker vs Jamahal Hill

Johnny Walker vs Jamahal Hill tale of the tape

Both fighters have a record of 0-0 against the common opposition. 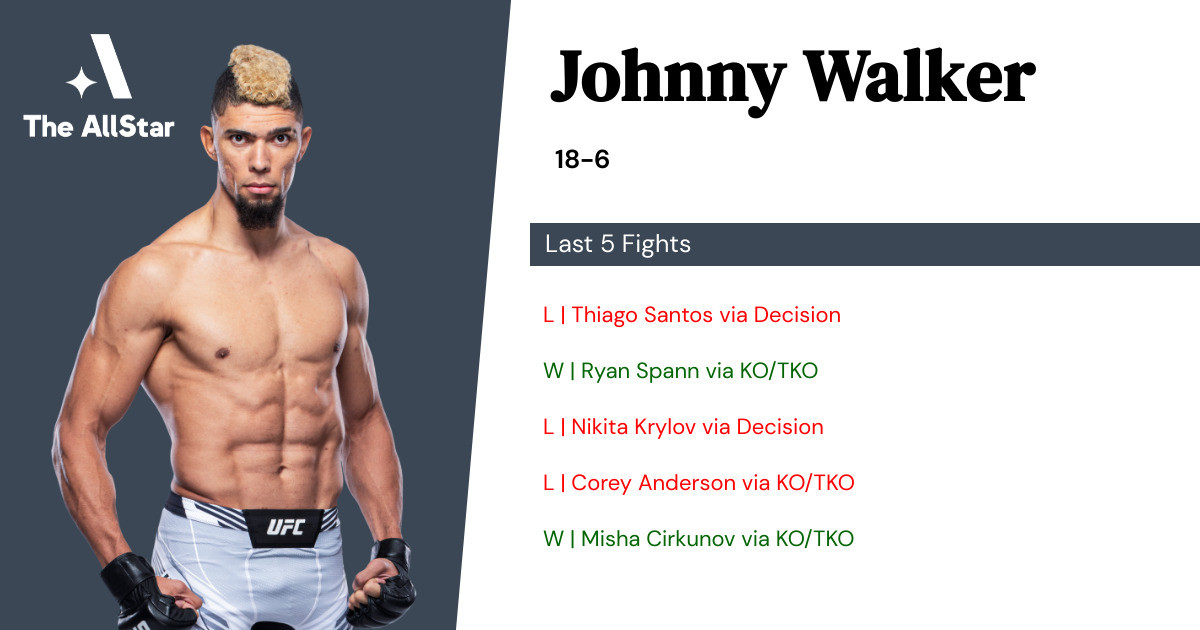 Johnny Walker has a 95% finish rate, including 15 by knockout, 2 by submission, 1 by decision.

Johnny Walker is looking to get back to winning ways after a loss at the hands of Thiago Santos at UFC Fight Night: Santos vs. Walker. 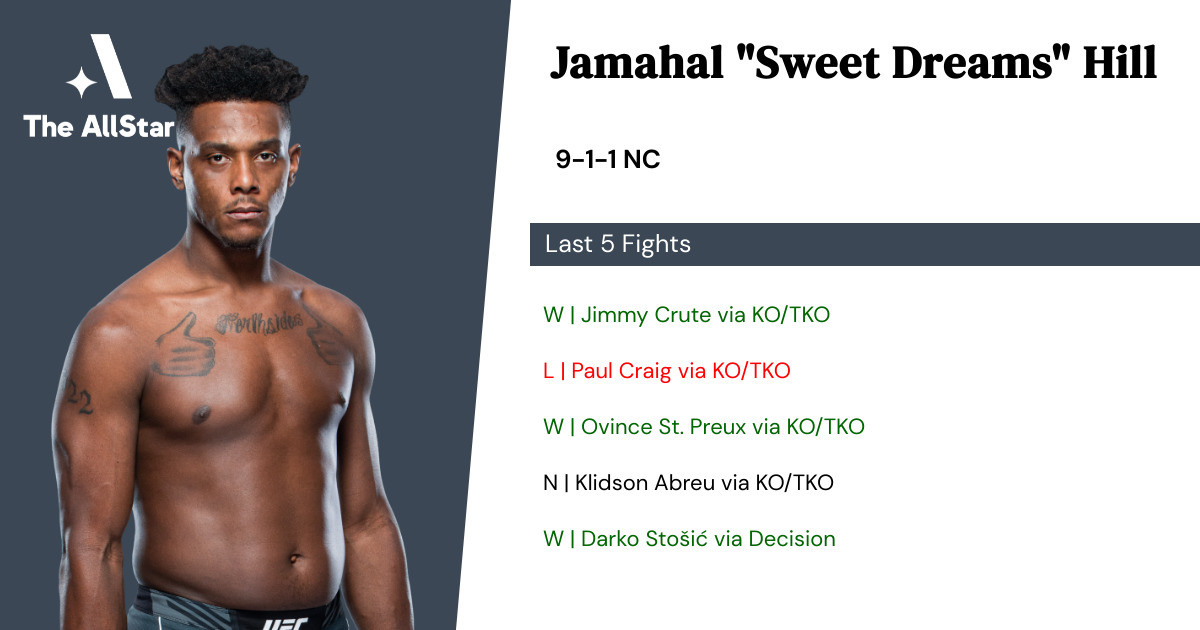 Jamahal Hill has a 56% finish rate, including 5 by knockout, 4 by decision.

Jamahal Hill is looking to put together a winning streak, having last beaten Jimmy Crute at UFC Fight Night: Font vs. Aldo.

Johnny Walker vs Jamahal Hill is set to go down at UFC Vegas 48 – Dos Anjos vs. Fiziev. The fight is expected to start at around 9:00pm EST on Saturday 19th February 2022.

ESPN+ is the best option to live stream Johnny Walker vs Jamahal Hill if you live in the United States. Outside of the USA, the best option is to register for UFC Fight Pass.

Where can I get the best odds for the Johnny Walker vs Jamahal Hill UFC fight?