Jonathan Martinez vs Vince Morales is set to go down at UFC Fight Night: Holm vs. Vieira at 5:30pm EST on Saturday 21st May 2022 in a 135lbs matchup.

Jonathan Martinez is on a two-fight winning streak after his recent victory over Alejandro Perez in February.

Vince Morales has also won two on the trot, with his most recent win coming by knockout against Louis Smolka.

Jonathan Martinez will be the betting favorite with opening odds of -185.

Vince Morales is the betting underdog with opening odds of +165.

Morales stepped up to fight Nathaniel Wood on short notice in March before withdrawing due to illness.

Jonathan Martinez has turned things around since a knockout loss to Davey Grant by stringing together successive wins over Zviad Lazishvili and Alejandro Perez.

Martinez has won four of his last five in the UFC and is 6-3 overall since making his debut in 2018.

Vince Morales has put a disappointing start to his UFC career behind him with two consecutive wins against Drako Rodriguez and Louis Smolka.

That's how you start the show! 😳@Vandetta135 gets the finish in RD 1️⃣! #UFCVegas44 pic.twitter.com/6asiBa5Qte

Morales lost three of his first four UFC fights, including a brutal leg kick TKO against Chris Gutierrez. Morales was given a shot in the UFC despite a submission loss on Dana White’s Contender Series in 2018.

Jonathan Martinez will be slightly taller at 5”8 compared to Morales who is 5”7. Martinez will also have a slight 2-inch reach advantage.

The stats show that both of these fighters keep it on the feet and throw hands. Both men land at a similar clip, with Martinez the more accurate (47%) compared to Morales (39%).

This is an intriguing matchup in the UFC Bantamweight Division between two dangerous fighters. Both of these fighters have several knockouts on their records and enter this matchup with plenty of momentum.

The stakes are considerable in this matchup between two rising talents in the 135lbs division. With both men riding two-fight win streaks, another victory could warrant a top 15 opponent next.

The oddsmakers’ predictions have Jonathan Martinez as the favorite with opening betting odds of -185.

Get your Jonathan Martinez vs Vince Morales picks in.

Jonathan Martinez vs Vince Morales tale of the tape 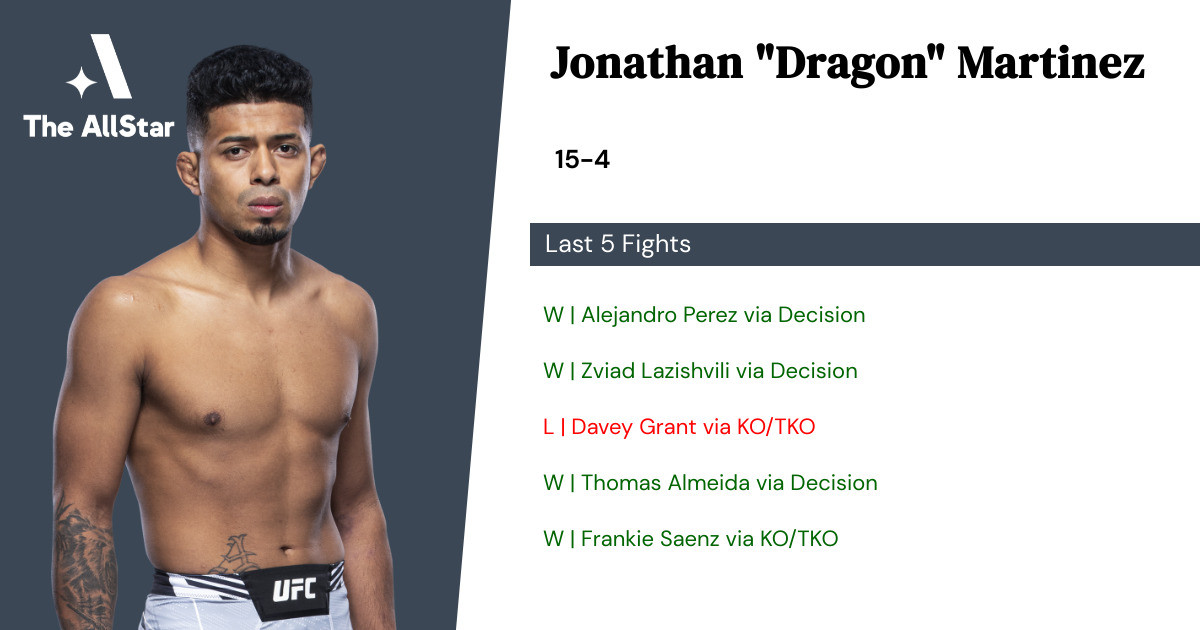 Jonathan Martinez has a 60% finish rate, including 7 by knockout, 2 by submission, 6 by decision. Vince Morales has a 73% finish rate, including 6 by knockout, 2 by submission, 3 by decision.

Jonathan Martinez vs Vince Morales is set to go down at UFC Fight Night – Holm vs. Vieira. The fight is expected to start at around 5:30pm EST on Saturday 21st May 2022.

ESPN+ is the best option to live stream Jonathan Martinez vs Vince Morales if you live in the United States. Outside of the USA, the best option is to register for UFC Fight Pass.

Where can I get the best odds for the Jonathan Martinez vs Vince Morales UFC fight?

Use the AllStar’s directory to find the best sportsbooks and recommendations on where to place UFC bets online. If you just want to play for fun, head over to to our Fantasy UFC picks app to make your fight predictions for Jonathan Martinez vs Vince Morales totally FREE.