Joseph Holmes will be making his second appearance in the UFC after a decision defeat to Jamie Pickett in January.

Alen Amedovski makes his return to the octagon after almost 3 years away. His last fight ended in a 14-second knockout loss.

Joseph Holmes will be the betting favorite with opening odds of -190.

Alen Amedovski is the betting underdog with opening odds of +170.

Amedovski has seen multiple fight bookings fall through since his last UFC appearance in September 2019.

Joseph Holmes saw his UFC debut end in defeat to Jamie Pickett, with his opponent grinding out the win through clinching exchanges.

Holmes has previously fought in Bellator and earned his shot in the UFC with a second-round submission win on Dana White’s Contender Series in October.

Alen Amedovski has spent over two and half years out of the octagon since a flash first-round knockout loss to John Phillips in September 2019.

The Macedonian saw a fight against Yaozong Hu fall through in the week leading up to UFC 264 due to COVID-related issues. The former Bellator fighter is 0-2 in the UFC.

Joseph Holmes is the much-younger man at 26 years old compared to his opponent who is 34.

Holmes is also significantly taller at 6”4 and will also have a huge 6-inch reach advantage.

Despite the age difference,  Amedovski has just one more fight on his pro record with 10.

Joseph Holmes is an exciting fighter who has finished all seven of his career victories. He will face a similarly dangerous man in Alen Amedovski, who will bring a 100% finishing rate to the Octagon (all by KO).

Neither of these fighters has recorded a victory in the UFC, but there is still plenty of time.

Another loss for Amedovski would put him at 0-3 in the promotion at the age of 34. In Holmes’ case, he is still just 26 so another defeat wouldn’t be quite as damaging.

The oddsmakers’ predictions have Joseph Holmes as the betting favorite with opening odds of -190.

Joseph Holmes gave his predictions during an exclusive with The AllStar:

Get your Joseph Holmes vs Alen Amedovski picks in.

Joseph Holmes vs Alen Amedovski tale of the tape 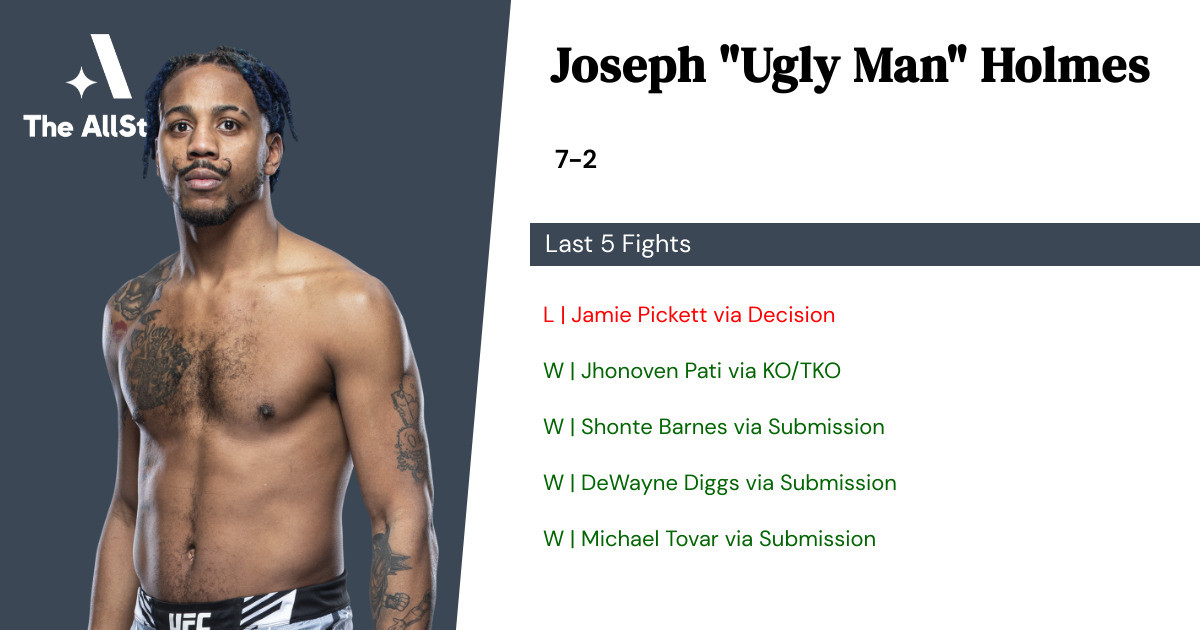 Joseph Holmes has a 100% finish rate, including 2 by knockout, 5 by submission.

Joseph Holmes is looking to get back to winning ways after a loss at the hands of Jamie Pickett at UFC Fight Night: Kattar vs. Chikadze.

Alen Amedovski has a 100% finish rate, including 8 by knockout.

Alen Amedovski is currently on a 2 fight losing skid.

Joseph Holmes vs Alen Amedovski is set to go down at UFC Fight Night – Holm vs. Vieira. The fight is expected to start at around 6:30pm EST on Saturday 21st May 2022.

ESPN+ is the best option to live stream Joseph Holmes vs Alen Amedovski if you live in the United States. Outside of the USA, the best option is to register for UFC Fight Pass.

Where can I get the best odds for the Joseph Holmes vs Alen Amedovski UFC fight?

Use the AllStar’s directory to find the best sportsbooks and recommendations on where to place UFC bets online. If you just want to play for fun, head over to to our Fantasy UFC picks app to make your fight predictions for Joseph Holmes vs Alen Amedovski totally FREE.