Josh Parisian vs Alan Baudot is set to go down at UFC Fight Night: Tsarukyan vs. Gamrot at 6:00pm EST on Saturday 25th June 2022 in a 265lbs matchup.

Alan Baudot has yet to record a win in the UFC after losing to Parker Porter by unanimous decision in February.

The opening odds for this fight are extremely close.

Alan Baudot will be the betting favorite with opening odds of -110.

Josh Parisian is the betting underdog with opening odds of -105.

This heavyweight matchup is expected on the main card at UFC Fight Night: Tsarukyan vs. Gamrot.

Josh Parisian does enough to score a split decision victory at #UFCVegas29 👏 pic.twitter.com/RDNhwljHB5

Parisian had previously earned his first victory in the UFC with a split decision over Roque Martinez after losing his debut to Parker Porter.

Alan Baudot came up short in his third UFC fight against Parker Porter, losing most of the fight in the grappling department.

Fighting out of Paris, France!

🇫🇷 Alan Baudot with a full camp under his belt for his sophomore performance. #UFCVegas31 pic.twitter.com/v3SVXlCXDd

Baudot has not recorded a victory in the promotion in three attempts. He lost his debut in the first round to rising star Tom Aspinall before a standing TKO defeat to Rodrigo Nascimento (later overturned to a No Contest).

Both of these men are well-matched when it comes to height and reach.

Although Josh Parisian is slightly younger at 32 years old, he has almost double the pro-MMA experience with 19 fights to Baudot’s 11.

This heavyweight fight promises to be a banger on the main card. Josh Parisian and Alan Baudot are both excellent strikers who tend to keep the fight on the feet.

Baudot has maintained a 100% finishing rate with seven knockouts in his career, while Parisian has finished all but two of his pro wins.

These two heavyweights have a lot at stake in this fight. Both fighters have struggled since joining the UFC and will be desperate for a victory to cement their position in the promotion.

The oddsmakers’ predictions have trouble separating these two well-matched fighters. The odds slightly favour Alan Baudot who opens with betting odds of -110.

Get your Josh Parisian vs Alan Baudot picks in.

Josh Parisian vs Alan Baudot tale of the tape 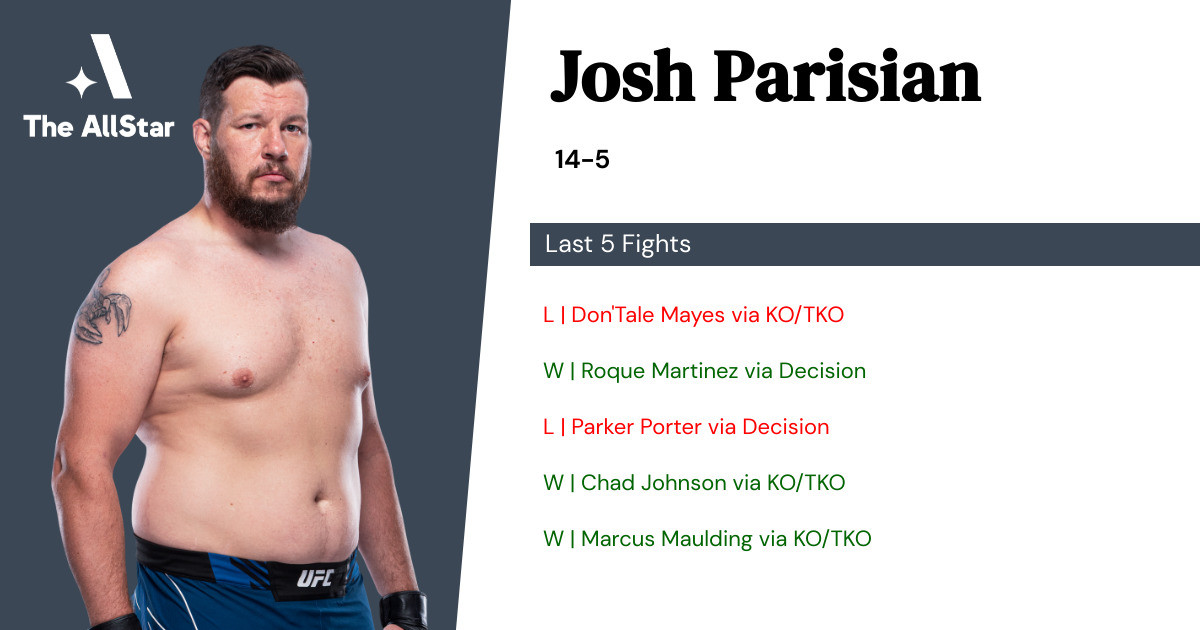 Josh Parisian has a 86% finish rate, including 10 by knockout, 2 by submission, 2 by decision.

Josh Parisian is looking to get back to winning ways after a loss at the hands of Don’Tale Mayes at UFC Fight Night: Lewis vs. Daukaus.

Alan Baudot has a 100% finish rate, including 7 by knockout.

Alan Baudot is looking to get back to winning ways after a loss at the hands of Parker Porter at UFC Fight Night: Walker vs. Hill.

Josh Parisian vs Alan Baudot is set to go down at UFC Fight Night – Tsarukyan vs. Gamrot. The fight is expected to start at around 6:00pm EST on Saturday 25th June 2022.

ESPN+ is the best option to live stream Josh Parisian vs Alan Baudot if you live in the United States. Outside of the USA, the best option is to register for UFC Fight Pass.

Where can I get the best odds for the Josh Parisian vs Alan Baudot UFC fight?

Use the AllStar’s directory to find the best sportsbooks and recommendations on where to place UFC bets online. If you just want to play for fun, head over to to our Fantasy UFC picks app to make your fight predictions for Josh Parisian vs Alan Baudot totally FREE.