Julian Erosa vs Steven Peterson is set to go down at UFC Vegas 47: Hermansson vs. Strickland at 8:30pm EST on Saturday 5th February 2022 in a 150lbs catchweight matchup.

Julian Erosa is coming off a third-round submission victory over Charles Jourdain after an impressive start to his UFC career. Erosa is 3-1 in the UFC, with all three victories coming by finish.

Steven Peterson is on a two-fight winning streak with victories over Chase Hooper and Martin Bravo. Peterson missed weight for this bout, which will now take place at a catchweight.

This fight between Julian Erosa and Steven Peterson was announced on October 8th and will be on the undercard of UFC Vegas 47: Hermansson vs Strickland.

After his win over Jourdain in September, Erosa called out Peterson personally:

“I called out that Steven Peterson kid. I posted it on my Instagram, and I even direct messaged him and then posted on his picture ‘check your DMs.’ I was trying to fight him, and I was looking for a fight.”

The two fighters have engaged in a war of words in the lead-up to the fight.

Steven Peterson weighed in at 149lbs during weigh-ins, 3lbs over the limit. This fight will now be contested at a catchweight and Peterson will forfeit 30% of his purse to Erosa.

Julian Erosa scored an impressive submission win over the talented Charles Jourdain in his last Octagon outing. The fight was 19-19 on all three judges’ scorecards before Erosa cinched in the D’Arce choke in the third round.

JUICY J gets it locked in TIGHT to end it! 🔒

After losing by split decision on Dana White’s Contender Series, Peterson eventually got his shot in the UFC. He is 3-3 in the promotion with two performance bonuses to his name.

Julian Erosa will have the range advantage over Steven Peterson in this match-up.

Both fighters eat plenty of strikes – Peterson absorbs 5.29 per minute to Erosa’s 5.90.

There is plenty of animosity between these two fighters. They have traded insults over social media, so expect a fiery encounter in the Octagon.

In an AllStar interview, Steven Peterson referred to Erosa as a “weirdo” for sending him DM’s on Instagram.

“I generally have a lot of respect for my opponents. But Julian Erosa, he’s a weirdo.”

There is a lot at stake in this Featherweight bout. Julian Erosa is a real talent and can force his way into the Top 15 rankings with a big win.

Steven Peterson can make it three-in-a-row in the UFC and also stake his claim to a Top 15 opponent next.

Peterson’s prediction is a knockout victory over Erosa. He plans to use his fists to put Erosa to sleep.

The oddsmaker’s predictions have Erosa winning with opening odds of -270.

Julian Erosa believes Peterson has mediocre striking and won’t last on the feet. His prediction has him dismantling Peterson from distance over 15 minutes.

All five staff members at MMA media outlet Bloody Elbow picked Julian Erosa for this fight. UFC fighter James Krause also picked Erosa and predicted that he will win the fight by decision.

Get your Julian Erosa vs Steven Peterson picks in here.

Where to bet on Julian Erosa vs Steven Peterson

Julian Erosa vs Steven Peterson tale of the tape 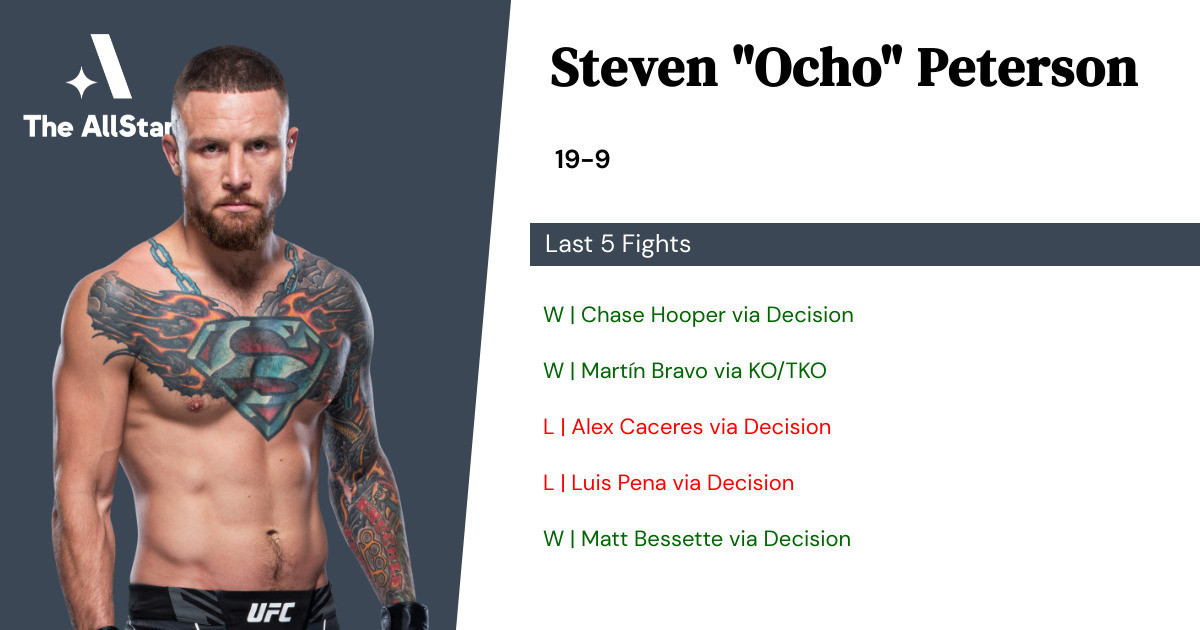 Steven Peterson has a 69% finish rate, including 6 by knockout, 7 by submission, 6 by decision. 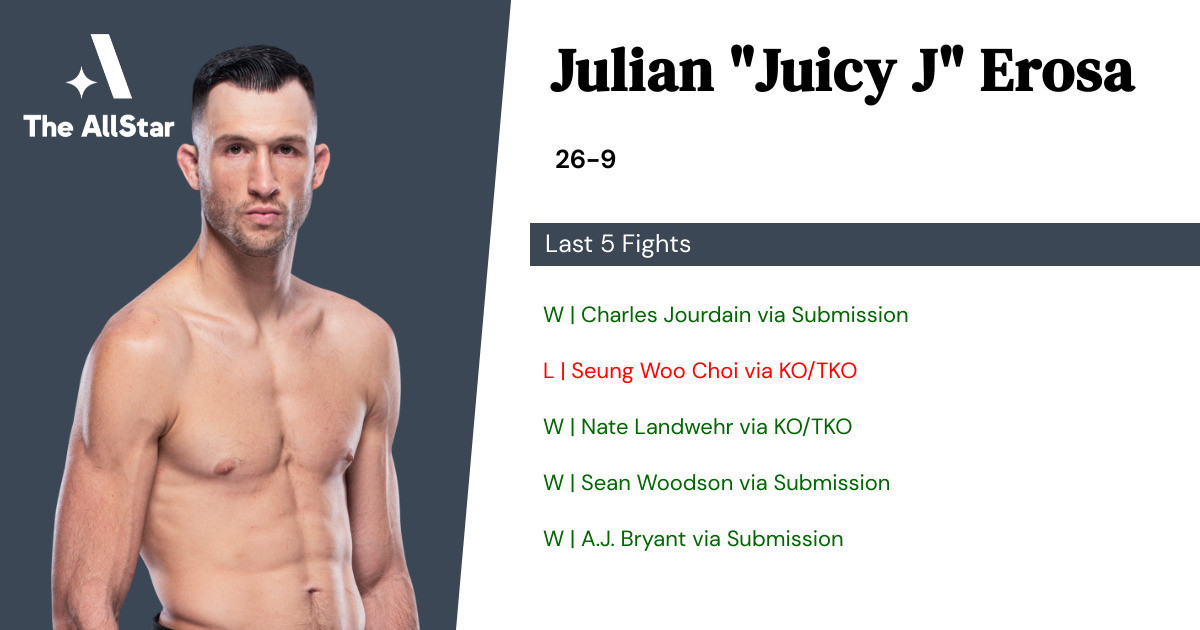 Julian Erosa has a 77% finish rate, including 11 by knockout, 12 by submission, 6 by decision.

Julian Erosa is looking to put together a winning streak, having last beaten Charles Jourdain at UFC Fight Night: Brunson vs. Till.

Julian Erosa vs Steven Peterson is set to go down at UFC Vegas 47 – Hermansson vs. Strickland. The fight is expected to start at around 8:30pm EST on Saturday 5th February 2022.

ESPN+ is the best option to live stream Julian Erosa vs Steven Peterson if you live in the United States. Outside of the USA, the best option is to register for UFC Fight Pass.

Where can I get the best odds for the Julian Erosa vs Steven Peterson UFC fight?