Julio Arce was unsuccessful in his last UFC appearance back in November, losing via TKO to Song Yadong.

Daniel Santos will be making his UFC debut on the back of a two-fight finishing streak.

Julio Arce will be the betting favorite with opening odds of -195.

Daniel Santos is the betting underdog with opening odds of +175.

This Bantamweight scrap is expected to take place during the prelims at UFC 273: Volkanovski vs Korean Zombie.

Julio Arce had a hit and miss 2021, knocking out Andre Ewell in July before suffering a knockout defeat to Song Yadong in November.

💢 @JArceTSMMA with a HUGE statement to end it in RD 2. #UFCVegas32 pic.twitter.com/raTHkQOYHk

Arce is 4-3 in his UFC career with notable victories over Dan Ige and Julian Erosa.

Daniel “Willycat” Santos last fought over two years ago, finishing both of his opponents. The Brazilian has just one loss in his career – a decision defeat to Murad Kalamov.

Santos has seen two fights fall through as his debut has been pushed back. He was initially booked to fight Timur Valiev, then Marcelo Rojo, in October, before the fight was scrapped.

Daniel Santos is the slightly taller fighter 5”7 compared to Arce who is 5”6.

Santos is also the younger man at 27 years old, while his opponent is 32.

Julio Arce has twice the professional MMA experience at 22 fights, while Santos has fought 11 times.

There is a quiet level of hype behind Daniel Santos, who has already been booked to fight top talent in the likes of Valiev and Rojo.

The Brazilian has finished almost all of his opponents and boasts particularly impressive spinning attacks.

Julio Arce is a bad man.

Julio Arce is always a danger in the Octagon, finishing three of his four UFC wins.

There is a lot at stake for these two fighters in a stacked Bantamweight division. Daniel Santos is making his UFC debut so will be eager to put on a show.

Julio Arce has alternated wins and losses since his successful UFC debut and hasn’t put together a winning streak since 2018.

The oddsmakers’ predictions have Julio Arce as the clear favorite with opening betting odds of -195.

Julio Arce made his predictions on the fight during an exclusive interview with The AllStar:

Get your Julio Arce vs Daniel Santos picks in.

Julio Arce vs Daniel Santos tale of the tape 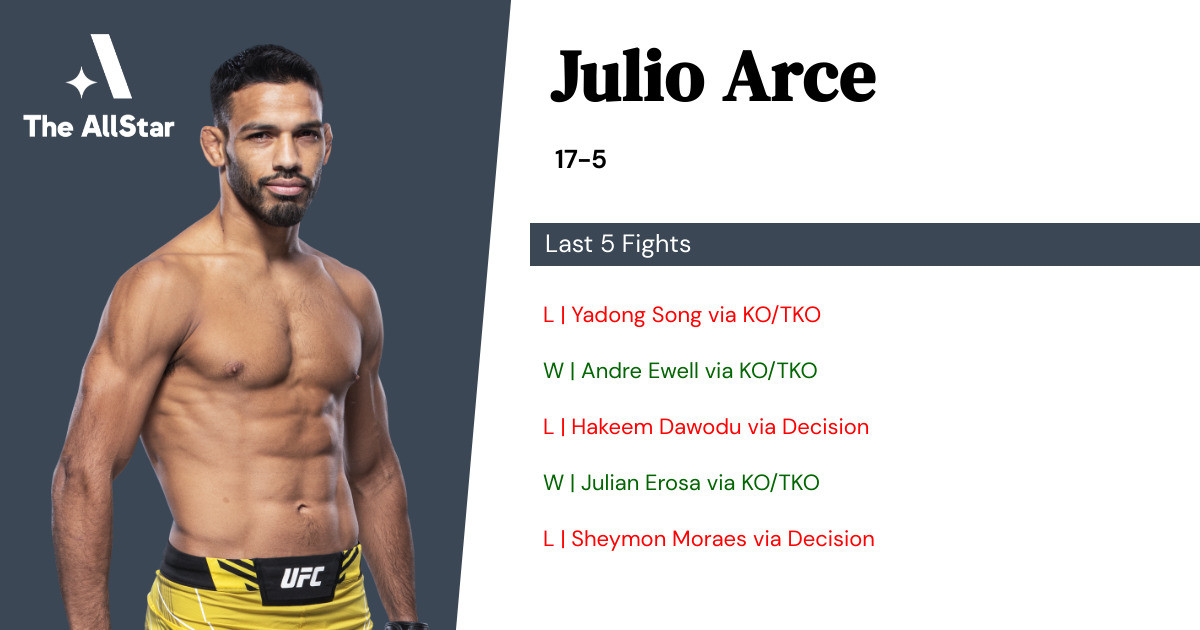 Julio Arce has a 59% finish rate, including 5 by knockout, 5 by submission, 7 by decision.

Julio Arce is looking to get back to winning ways after a loss at the hands of Yadong Song at UFC Fight Night: Holloway vs. Rodriguez.

Julio Arce vs Daniel Santos is set to go down at UFC 273 – Volkanovski vs. Korean Zombie. The fight is expected to start at around 8:00pm EST on Saturday 9th April 2022.

ESPN+ is the best option to live stream Julio Arce vs Daniel Santos if you live in the United States. Outside of the USA, the best option is to register for UFC Fight Pass.

Where can I get the best odds for the Julio Arce vs Daniel Santos UFC fight?

Use the AllStar’s directory to find the best sportsbooks and recommendations on where to place UFC bets online. If you just want to play for fun, head over to to our Fantasy UFC picks app to make your fight predictions for Julio Arce vs Daniel Santos totally FREE.