Ludovit Klein vs Mason Jones is set to go down at UFC Fight Night: Blaydes vs. Aspinall at 10:00am EST on Saturday 23rd July 2022 in a 155lbs matchup.

Mason Jones earned his first victory in the UFC with a unanimous decision over David Onama last October.

Mason Jones will be the betting favorite with opening odds of -310.

Ludovit Klein is the betting underdog with opening odds of +265.

Ludovit Klein vs Mason Jones was first reported on July 14th, just a week from the fight.

Can indeed confirm Ignacio Bahamondes is out due to visa issues (first rep. @CCLegaspi)

🚨🚨BREAKING🚨🚨
Ľudovít Klein (r) is now booked for the #UFCLondon card. He takes on Mason Jones (l) at 155 lbs on July 23rd. pic.twitter.com/wDmDKhGisY

Klein was initially scheduled to fight Ignacio Bahamondes at UFC 277 but his opponent withdrew.

Mason Jones will step up and take this fight on short notice.

Ludovit Klein returned to the win column following a hard-fought win over Devonte Smith to record his second victory in the UFC.

Klein had suffered consecutive defeats to Mike Trizano and Nate Landwehr over 2021 after a first-round knockout win over Shane Young on his debut.

Mason Jones finally registered a victory in the UFC on the third attempt. The Welshman dominated short-notice replacement David Onama in October.

Jones dropped his debut to Mike Davis before his second UFC fight against Alan Patrick ended in a no contest due to an eye poke.

Mason Jones will be the taller man in this matchup at 5”10 compared to the 5”7 Klein. However, both men will have an identical 72-inch reach advantage.

Both fighters are also the same age at 27 years old. Ludovit Klein has almost double the professional MMA experience with 22 fights, while Jones has 12 fights.

Both of these fighters have bright futures in the UFC Lightweight Division. Mason Jones is known for his grappling heavy approach, but he will have a tough time against the seasoned grappler Ludovit Klein.

Ludovit Klein is looking to put together his first streak in the UFC following a 2-2 start in the promotion.

Mason Jones will know that a win is essential after recording just one victory in three UFC fights. Being the sizable betting favorite will only add to the pressure.

The oddsmakers’ predictions have Mason Jones as the betting favorite with opening odds of -310.

Get your Ludovit Klein vs Mason Jones picks in.

Ludovit Klein vs Mason Jones tale of the tape 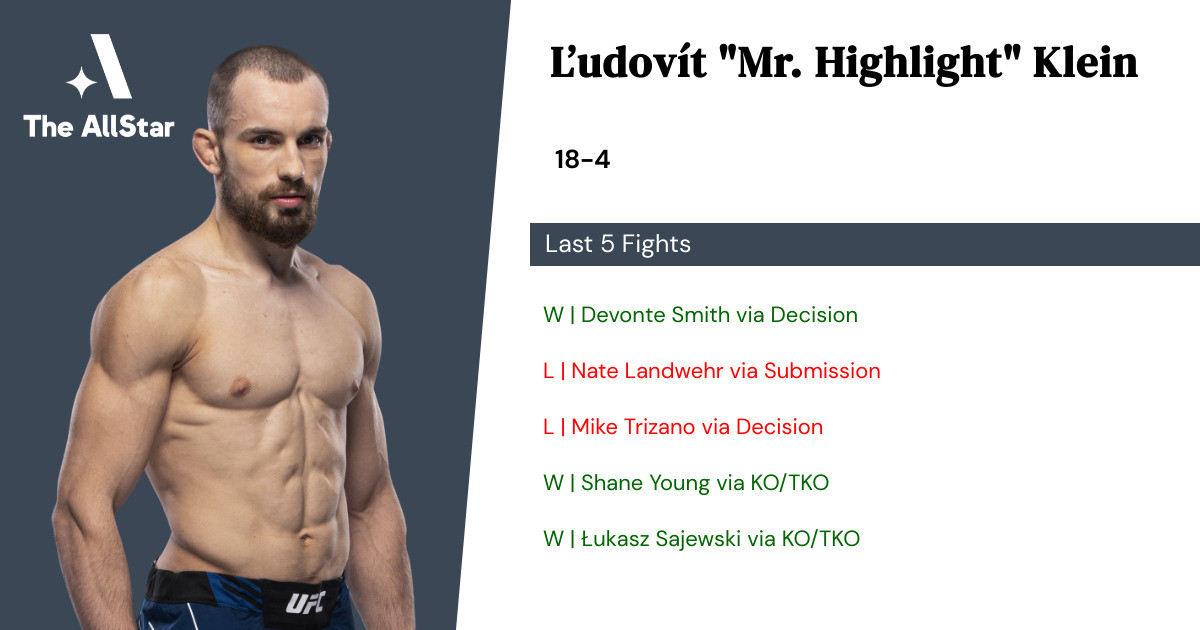 Ľudovít Klein has a 89% finish rate, including 8 by knockout, 8 by submission, 2 by decision.

Ľudovít Klein is looking to put together a winning streak, having last beaten Devonte Smith at UFC 272: Covington vs. Masvidal. 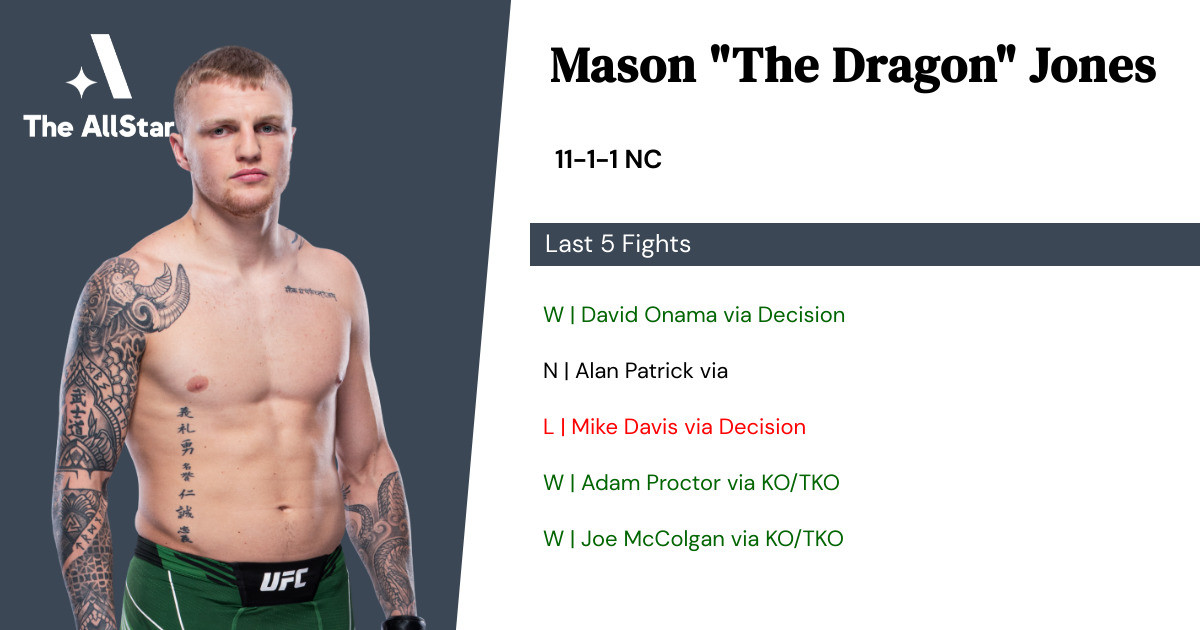 Mason Jones has a 64% finish rate, including 4 by knockout, 3 by submission, 4 by decision.

Mason Jones is looking to put together a winning streak, having last beaten David Onama at UFC Fight Night: Costa vs. Vettori.

Ludovit Klein vs Mason Jones is set to go down at UFC Fight Night – Blaydes vs. Aspinall. The fight is expected to start at around 10:00am EST on Saturday 23rd July 2022.

ESPN+ is the best option to live stream Ludovit Klein vs Mason Jones if you live in the United States. Outside of the USA, the best option is to register for UFC Fight Pass.

Where can I get the best odds for the Ludovit Klein vs Mason Jones UFC fight?

Use the AllStar’s directory to find the best sportsbooks and recommendations on where to place UFC bets online. If you just want to play for fun, head over to to our Fantasy UFC picks app to make your fight predictions for Ludovit Klein vs Mason Jones totally FREE.