Luis Saldana vs Bruno Souza is set to go down at UFC Fight Night: Blaydes vs. Daukaus at 4:30pm EST on Saturday 26th March 2022 in a 145lbs matchup.

Luis Saldana dropped a unanimous decision to Austin Lingo in his last UFC outing in August. The Contender Series graduate is now 1-1 in the promotion.

Luis Saldana opened as a -130 very slight betting favorite. Placing a bet on Saldana means you would need to bet $130 in order to win $100.

Our man @MmaBruno is ready to turn heads in his return to the @ufc's Octagon vs. Luis Saldana on March 26 ✍🏾#TheDarkside pic.twitter.com/eGK9nzHJiU

This Featherweight bout will take place on the prelims at UFC Fight Night: Blaydes vs Daukaus.

Luis Saldana started his fight with Austin Lingo brightly before fading in the later rounds, eventually losing by unanimous decision.

Saldana punched his ticket to the UFC with a highlight-reel knockout win on Dana White’s Contender Series before winning his debut against Jordan Griffin.

Turning on the heat at the end of RD 2 🔥

The Brazilian had entered the fight on the back of a 10-fight win streak after capturing the LFA Featherweight title.

Luis Saldana is an inch taller than Bruno Souza at 5”11 and will notably have a significant 3-inch reach advantage over this fight.

Saldana is also the older fighter at 31 years old compared to Souza who is 26. He also has more fight experience with 22 pro fights to Souza’s 12.

This is an exciting bout between two prospects in the Featherweight Division.

Despite both men coming off of defeats, they fought high-level opposition and have bright futures in the promotion.

Luis Saldana is a slick striker who likes to pick his opponents apart at range, while Bruno Souza will hope to utilize his world-class jiu-jitsu skills.

With both men losing their last UFC bout, the stakes in this fight are significant. The victor could find themselves matched up to a ranked opponent next.

The oddsmakers’ predictions are very tight in this fight. The bookies predict Luis Saldana as the small favorite with opening odds of -130.

Speaking with The AllStar, Bruno Souza picks a close fight on the feet:

Get your Luis Saldana vs Bruno Souza picks in.

Luis Saldana vs Bruno Souza tale of the tape

Bruno Souza has a 40% finish rate, including 1 by knockout, 2 by submission, 6 by decision.

Bruno Souza is looking to get back to winning ways after a loss at the hands of Melsik Baghdasaryan at UFC 268: Usman vs. Covington 2. 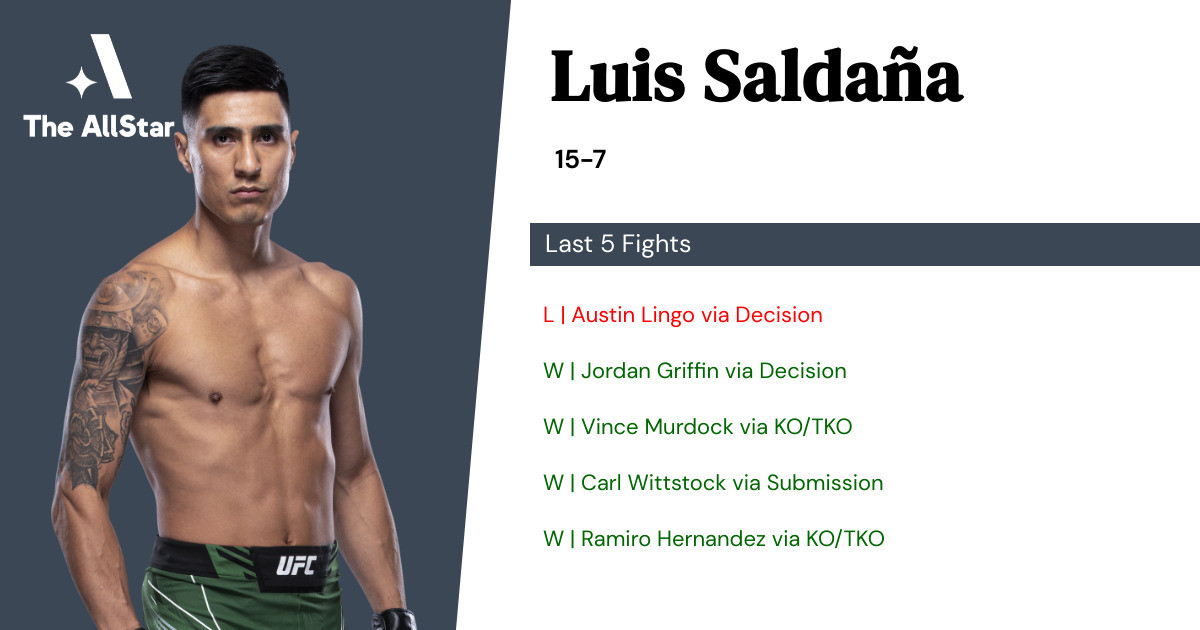 Luis Saldaña has a 94% finish rate, including 6 by knockout, 8 by submission, 1 by decision.

Luis Saldaña is looking to get back to winning ways after a loss at the hands of Austin Lingo at UFC Fight Night: Cannonier vs. Gastelum.

Luis Saldana vs Bruno Souza is set to go down at UFC Fight Night – Blaydes vs. Daukaus. The fight is expected to start at around 4:30pm EST on Saturday 26th March 2022.

ESPN+ is the best option to live stream Luis Saldana vs Bruno Souza if you live in the United States. Outside of the USA, the best option is to register for UFC Fight Pass.

Where can I get the best odds for the Luis Saldana vs Bruno Souza UFC fight?

Use the AllStar’s directory to find the best sportsbooks and recommendations on where to place UFC bets online. If you just want to play for fun, head over to to our Fantasy UFC picks app to make your fight predictions for Luis Saldana vs Bruno Souza totally FREE.