Marc Diakiese vs Damir Hadzovic is set to go down at UFC Fight Night: Blaydes vs. Aspinall at 1:00pm EST on Saturday 23rd July 2022 in a 155lbs matchup.

Marc Diakiese earned a big win over Viacheslav Borshchev in his last UFC appearance in March to snap a two-fight skid.

Marc Diakiese opened as a -290 betting favorite. Placing a bet on Diakiese means you would need to bet $290 in order to win $100.

Marc Diakiese vs Damir Hadzovic was first reported on May 24th.

Marc Diakiese recorded his first UFC win since 2019 with a convincing display against Viacheslav Borshchev, using his wrestling to good effect.

Diakiese bounced back from consecutive defeats to Rafael Alves and Rafael Fiziev. The Brit is now 6-5 over his UFC career.

Damir Hadzovic survived a third-round onslaught from Yancy Medeiros to earn a unanimous decision over the Hawaiian.

What an absolute battle! 👊

Hadzovic had suffered losses to Renato Moicano and Christos Giagos prior to his win over Medeiros.

Marc Diakiese is slightly taller than his opponent at 5”10 compared to the 5”9 Hadzovic. Importantly, Diakiese will bring a 3-inch reach advantage into this fight.

There is a big difference in age between these two. Hadzovic is 35 years old compared to the 29-year-old Diakiese. Both men have 20 professional fights on their record.

Marc Diakiese has been involved in a number of exciting fights over his UFC career. The Brit always brings power and heart to the Octagon.

Both fighters have a lot at stake in this one. Another defeat for either man could spell the end of their UFC career.

The oddsmakers’ predictions have Marc Diakiese as the betting favorite with opening odds of -290. 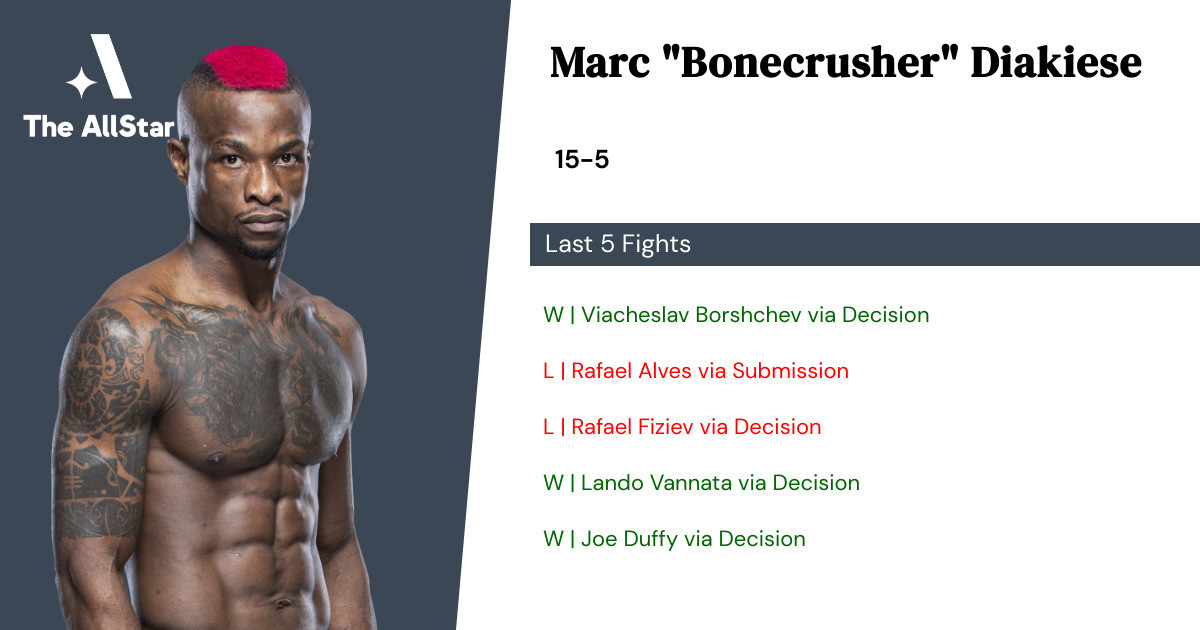 Marc Diakiese has a 47% finish rate, including 6 by knockout, 1 by submission, 8 by decision.

Marc Diakiese is looking to put together a winning streak, having last beaten Viacheslav Borshchev at UFC Fight Night: Blaydes vs. Daukaus. Damir Hadžović has a 72% finish rate, including 7 by knockout, 3 by submission, 4 by decision.

Damir Hadžović is looking to put together a winning streak, having last beaten Yancy Medeiros at UFC Fight Night: Gane vs. Volkov.

Marc Diakiese vs Damir Hadzovic is set to go down at UFC Fight Night – Blaydes vs. Aspinall. The fight is expected to start at around 1:00pm EST on Saturday 23rd July 2022.

ESPN+ is the best option to live stream Marc Diakiese vs Damir Hadzovic if you live in the United States. Outside of the USA, the best option is to register for UFC Fight Pass.

Where can I get the best odds for the Marc Diakiese vs Damir Hadzovic UFC fight?

Use the AllStar’s directory to find the best sportsbooks and recommendations on where to place UFC bets online. If you just want to play for fun, head over to to our Fantasy UFC picks app to make your fight predictions for Marc Diakiese vs Damir Hadzovic totally FREE.