Marc Diakiese vs Viacheslav Borshchev is set to go down at UFC Fight Night: Blaydes vs. Daukaus at 5:00pm EST on Saturday 26th March 2022 in a 155lbs matchup.

Marc Diakiese is on a two-fight losing streak after a recent submission loss to Rafael Alves in November.

Viacheslav Borshchev is looking to build on his successful UFC debut in January with another victory.

Viacheslav Borshchev opened as a -195 betting favorite. Placing a bet on Borshchev means you would need to bet $195 in order to win $100.

This Lightweight Divison matchup is expected to take place on the prelims at UFC Fight Night: Blaydes vs Daukaus.

Marc Diakiese has lost his last two UFC fights to Rafael Fiziev and Rafael Alves. The Englishman is now 5-5 in the promotion.

Diakiese began his UFC career with three victories before a run of three defeats to Drakkar Klose, Dan Hooker and Nasrat Haqparast.

Viacheslav Borshchev announced himself to UFC fans with a vicious first-round knockout via body shot on his debut.

The Russian earned his spot in the promotion with a knockout on Dana White’s Contender Series. He is 6-1, with five of his wins coming by KO.

Both of these fighters stand 5”10 tall, although Marc Diakiese will have a significant 4-inch reach advantage over this fight.

Despite being two years younger than his opponent, Marc Diakiese has more professional fight experience with 19 fights to Borshchev’s 7.

This Lightweight scrap matches up two extremely dangerous strikers. Marc Diakiese is one of the most technical strikers in the division, while Borshchev brings genuine one-punch knockout power.

Diakiese has lost 5 of his last 7 UFC fights, so he could be fighting for his future in the promotion. Borshchev appears to be on the way up the 155lbs rankings. A win here could bring a Top 15 opponent next.

The oddsmakers’ predictions see Viacheslav Borshchev as the sizable favorite with betting odds of -195. 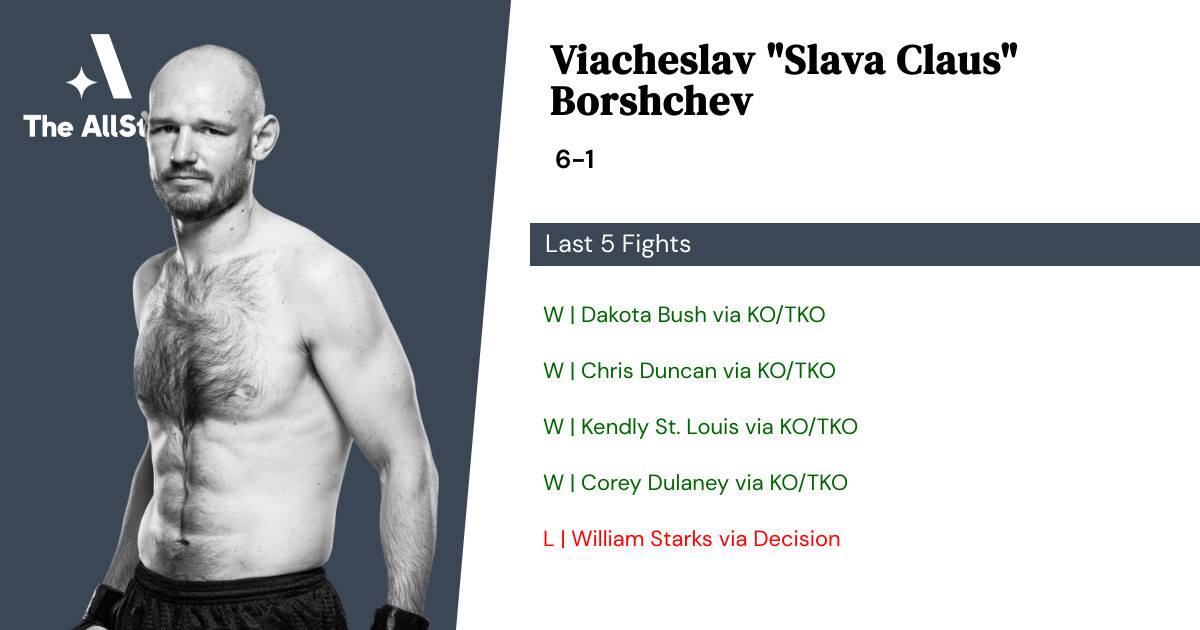 Viacheslav Borshchev has a 84% finish rate, including 5 by knockout, 1 by decision. 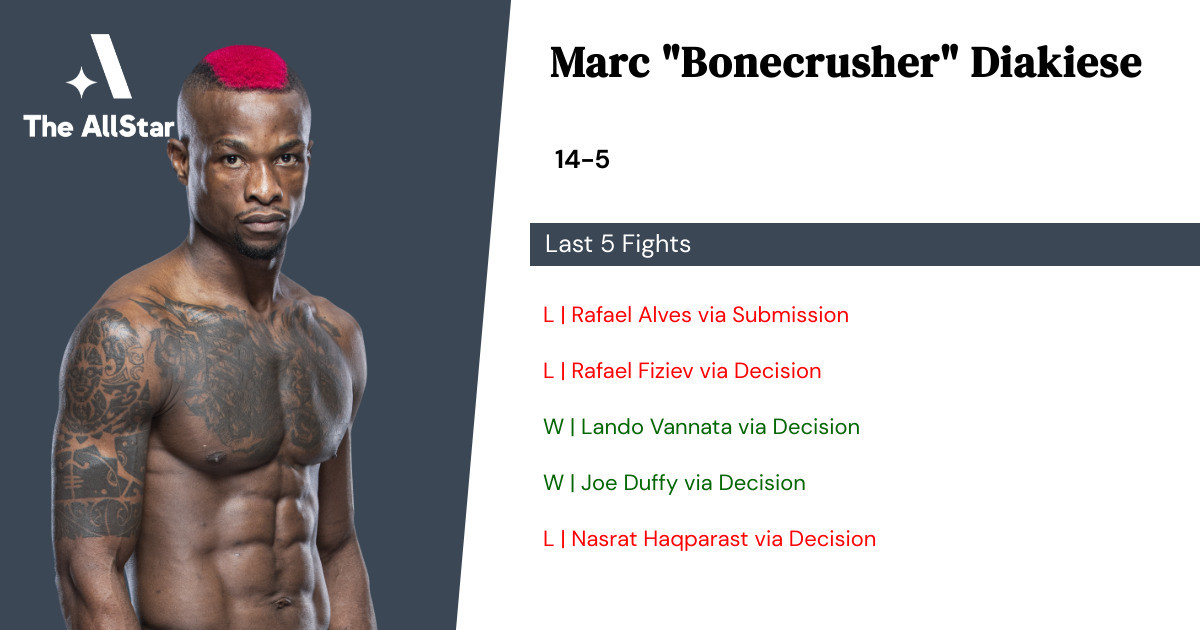 Marc Diakiese has a 50% finish rate, including 6 by knockout, 1 by submission, 7 by decision.

Marc Diakiese is currently on a 2 fight losing skid.

Marc Diakiese vs Viacheslav Borshchev is set to go down at UFC Fight Night – Blaydes vs. Daukaus. The fight is expected to start at around 5:00pm EST on Saturday 26th March 2022.

ESPN+ is the best option to live stream Marc Diakiese vs Viacheslav Borshchev if you live in the United States. Outside of the USA, the best option is to register for UFC Fight Pass.

Where can I get the best odds for the Marc Diakiese vs Viacheslav Borshchev UFC fight?

Use the AllStar’s directory to find the best sportsbooks and recommendations on where to place UFC bets online. If you just want to play for fun, head over to to our Fantasy UFC picks app to make your fight predictions for Marc Diakiese vs Viacheslav Borshchev totally FREE.