Mario Bautista vs Brian Kelleher is set to go down at UFC Fight Night: Tsarukyan vs. Gamrot at 6:00pm EST on Saturday 25th June 2022 in a 135lbs matchup.

Mario Bautista returned to the win column with a unanimous decision victory over Jay Perrin in February.

Brian Kelleher saw his two-fight win streak come to an end after losing via first-round submission to Umar Nurmagomedov at UFC 272.

Mario Bautista will be the betting favorite with opening odds of -165.

Brian Kelleher is the betting underdog with opening odds of +150.

Both of these fighters will be making a relatively quick turnaround after fighting just a few months ago.

Bautista lost his UFC debut to Cory Sandhagen before earning wins over Jin Soo Son and Miles Johns. He also suffered a TKO loss to Trevin Jones at UFC 259 before his most recent win.

Brian Kelleher was the huge +600 underdog in his matchup with Umar Nurmagomedov in March, losing the fight by rear-naked choke in the first round.

Kelleher has earned victories over Domingo Pilarte and Kevin Croom in the past year. “Boom Boom” is now 8-6 in the UFC.

Brian Kelleher is the far more experienced fighter compared to his opponent. Kelleher has 37 fights on his pro record, while Bautista has fought 11 times.

Mario Bautista will have a significant 5-inch reach advantage in this fight. He is also 3 inches taller than his opponent at 5”8.

This fight matches up two of the most exciting fighters in the Bantamweight Division.

Brian Kelleher is extremely dangerous standing or on the ground, while Mario Bautista put on a masterclass in his last UFC performance.

I am shocked – shocked I say – that Brian Kelleher iced an opponent the UFC drafted on less than 24 hours notice #UFCVegas9 pic.twitter.com/99F1fSk67l

This fight will be one of the earlier prelim matchups, so don’t miss it.

Bautista and Kelleher have a lot going for them, so this matchup could determine a lot in terms of their career trajectories.

A win for Bautista would make it four wins from five, while Kelleher will be desperate to return to form.

The oddsmakers’ predictions have Mario Bautista as the betting favorite with opening odds of -165.

Get your Mario Bautista vs Brian Kelleher picks in.

Mario Bautista vs Brian Kelleher tale of the tape 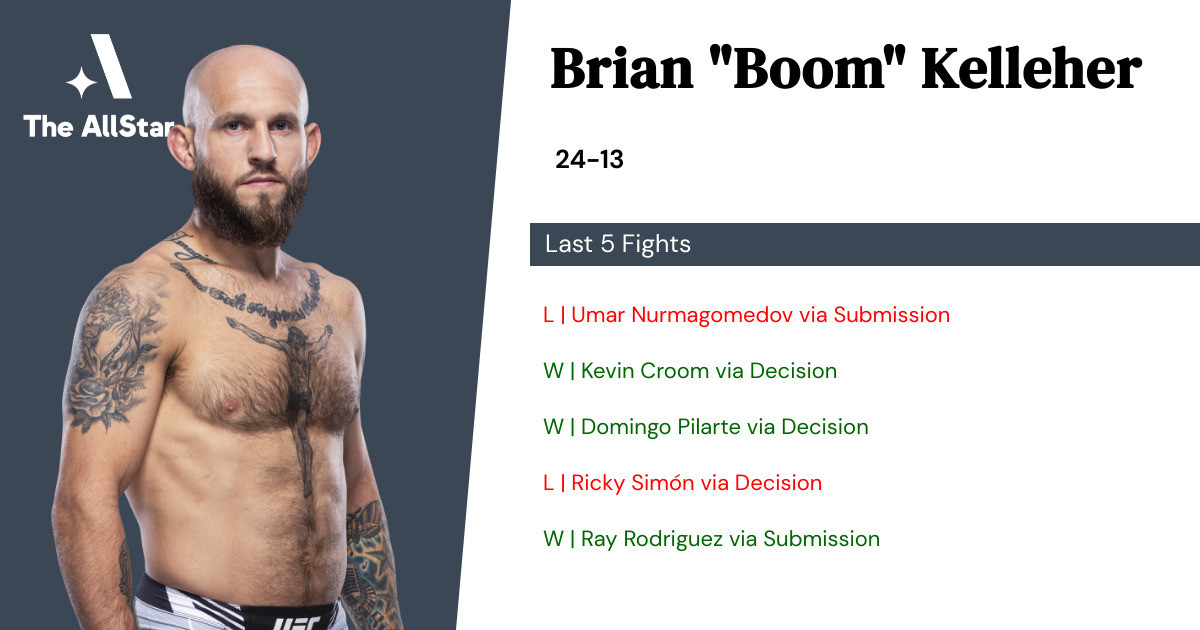 Brian Kelleher has a 75% finish rate, including 8 by knockout, 10 by submission, 6 by decision.

Brian Kelleher is looking to get back to winning ways after a loss at the hands of Umar Nurmagomedov at UFC 272: Covington vs. Masvidal. 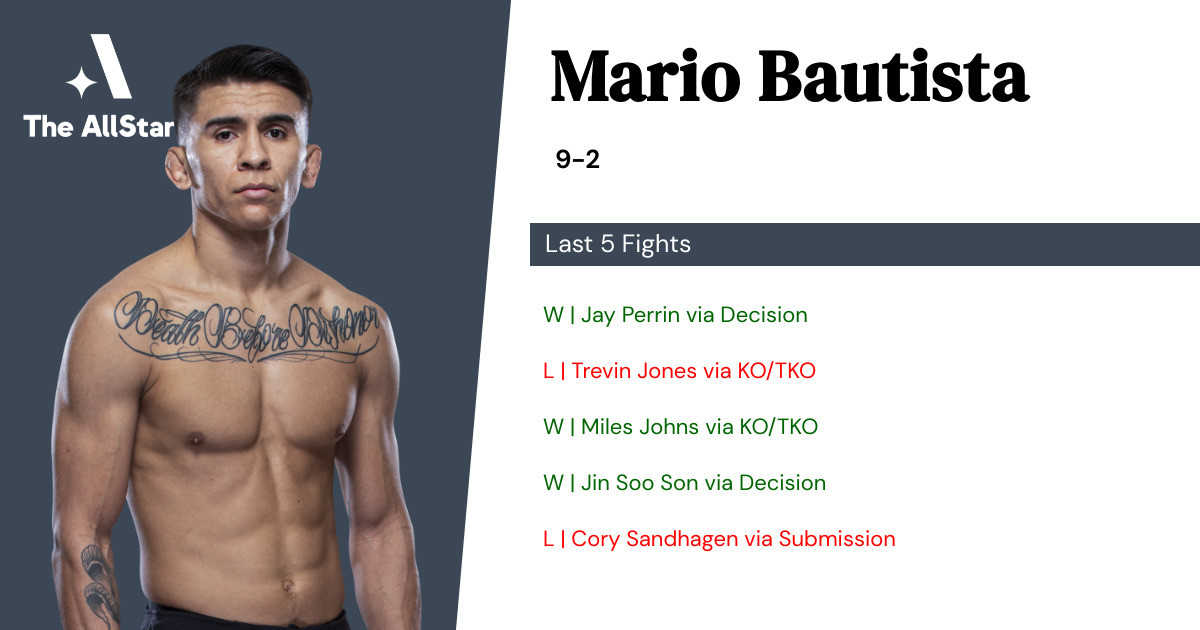 Mario Bautista has a 67% finish rate, including 3 by knockout, 3 by submission, 3 by decision.

Mario Bautista is looking to put together a winning streak, having last beaten Jay Perrin at UFC Fight Night: Walker vs. Hill.

Mario Bautista vs Brian Kelleher is set to go down at UFC Fight Night – Tsarukyan vs. Gamrot. The fight is expected to start at around 6:00pm EST on Saturday 25th June 2022.

ESPN+ is the best option to live stream Mario Bautista vs Brian Kelleher if you live in the United States. Outside of the USA, the best option is to register for UFC Fight Pass.

Where can I get the best odds for the Mario Bautista vs Brian Kelleher UFC fight?

Use the AllStar’s directory to find the best sportsbooks and recommendations on where to place UFC bets online. If you just want to play for fun, head over to to our Fantasy UFC picks app to make your fight predictions for Mario Bautista vs Brian Kelleher totally FREE.