Mario Bautista vs Khalid Taha is set to go down at UFC Fight Night: Dos Anjos vs. Fiziev at 6:30pm EST on Saturday 19th February 2022 in a 135lbs matchup.

Mario Bautista has gone 2-2 in the UFC since his debut in September 2019 against Cory Sandhagen. Bautista lost his last fight which snapped a two-fight winning streak.

Khalid Taha is on a two-fight losing streak after his most recent loss to Sergey Morozov in July 2021. Taha has gone 1-3-1(NC) over his UFC career.

The betting odds for this fight are extremely close. Mario Bautista will be the slight betting favorite with opening odds of -115.

Khalid Taha will be the underdog with opening odds of +105. This is as close to a pick ‘em fight as it gets.

This bout between Mario Bautista and Khalid Taha was first reported on November 14th, 2021. The scrap is set to take place on the prelims at UFC Vegas 48.

Mario Bautista had a night to forget in his last UFC appearance, losing to Trevin Jones via KO in Round 2. This was the first knockout defeat of his career.

Prior to this, Bautista was on a two-fight winning streak with successive victories against Miles Johns and Jin Soo Son.

Khalid Taha has lost his last two fights in the UFC against opponents Sergey Morozov and Raoni Barcelos.

IT ONLY TOOK SECONDS!@KhalidTahaMMA knocks out Salmon in the first round! #UFC236 pic.twitter.com/qzP7xSCEsU

Taha previously won a bout against Bruno Silva at UFC 243 before the decision was overturned due to an adverse drug test result.

Mario Bautista will be the taller fighter in this one at 5”8, while Khalid Taha is 5”5. However, both men will have an identical reach of 69 inches.

While both fighters are 28 years old, Taha is the more-experienced fighter with 18 pro fights to Bautista’s 10.

These two fighters are extremely dangerous on the feet, with high finishing rates and multiple knockouts on their records.

Bautista has won 2 performance bonuses in just 4 UFC fights, while Taha was involved in an epic Fight of the Night scrap with Raoni Barcelos in .

Both fighters are entering this bout off the back of a loss, so the stakes are high. Khalid Taha, who is 1-3-1(NC) in the UFC, may be fighting for his place in the promotion.

This fight is very difficult to make a prediction on, with both fighters so well-matched. The oddsmakers’ predictions slightly lean towards Mario Bautista.

Get your Mario Bautista vs Khalid Taha picks in.

Where to bet on Mario Bautista vs Khalid Taha

Mario Bautista vs Khalid Taha tale of the tape 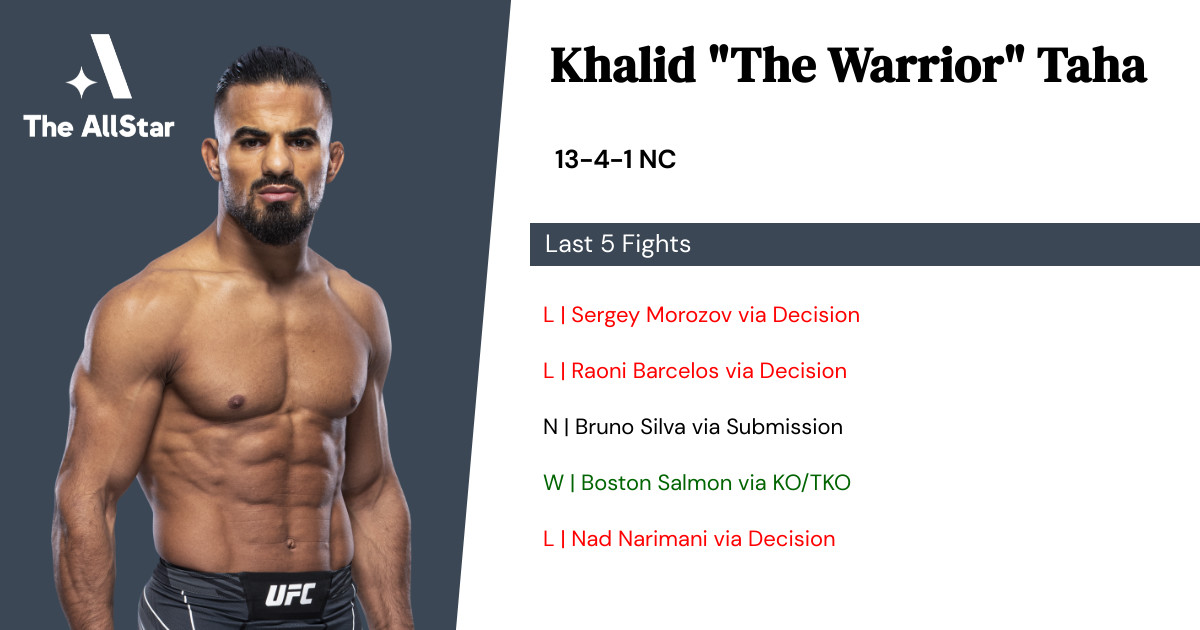 Khalid Taha has a 85% finish rate, including 8 by knockout, 3 by submission, 2 by decision.

Khalid Taha is currently on a 2 fight losing skid. 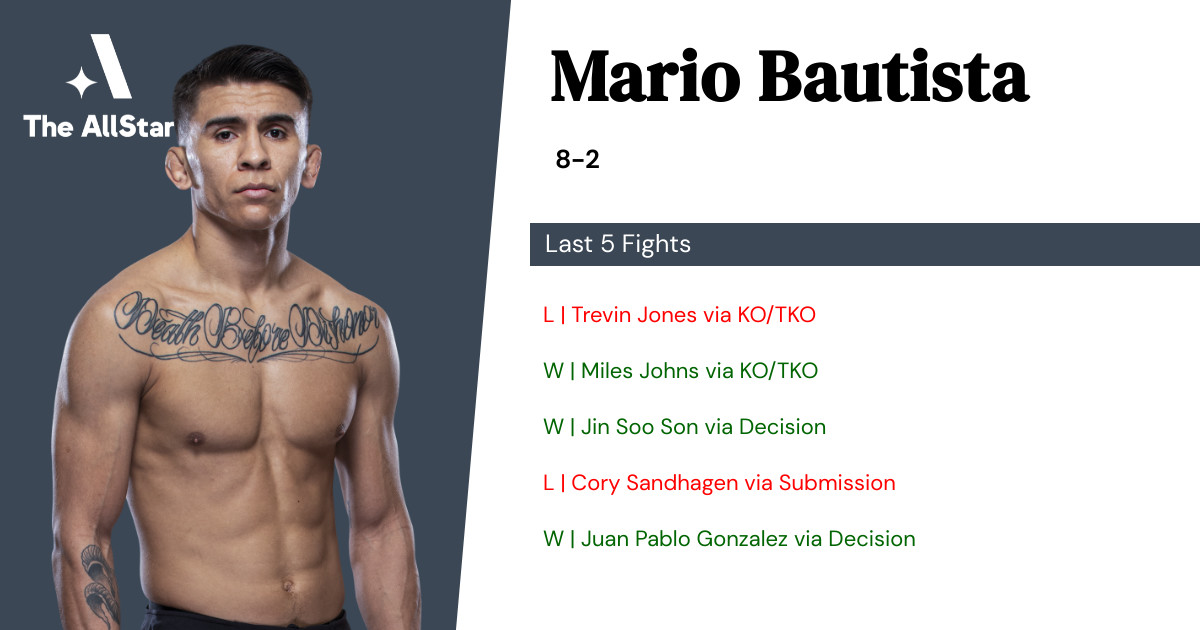 Mario Bautista has a 75% finish rate, including 3 by knockout, 3 by submission, 2 by decision.

Mario Bautista is looking to get back to winning ways after a loss at the hands of Trevin Jones at UFC 259: Błachowicz vs. Adesanya.

Mario Bautista vs Khalid Taha is set to go down at UFC Vegas 48 – Dos Anjos vs. Fiziev. The fight is expected to start at around 6:30pm EST on Saturday 19th February 2022.

ESPN+ is the best option to live stream Mario Bautista vs Khalid Taha if you live in the United States. Outside of the USA, the best option is to register for UFC Fight Pass.

Where can I get the best odds for the Mario Bautista vs Khalid Taha UFC fight?