Maycee Barber vs Montana De La Rosa is set to go down at UFC Fight Night: Lemos vs. Andrade at 9:30pm EST on Saturday 23rd April 2022 in a 125lbs matchup.

Maycee Barber bounced back to winning ways in July with a split decision victory over Miranda Maverick.

Montana De La Rosa earned her first win in over a year with a stoppage victory over Ariane Lipski in June.

Maycee Barber opened as a -185 betting favorite. Placing a bet on Barber means you would need to bet $185 in order to win $100.

This fight is expected to take place on the main card of UFC Fight Night: Lemos vs. Andrade.

Maycee Barber is a BEAST!!

After getting her UFC career off to a fantastic start with three consecutive finishes, Barber suffered her first two career losses with defeats against Roxanne Modafferi and Alexa Grasso.

Montana De La Rosa defeated Ariane Lipski via ground and pound in June. She entered this fight off the back of a majority draw against Mayra Bueno Silva.

Vicious GnP 😤@MontanaMarie211 is a problem on the ground!

Like her opponent, De La Rosa started her UFC stint with three consecutive finishes. She has since gone on a run of two victories in her last five fights.

Montana De La Rosa will be the taller woman in this fight with a height of 5”7 compared to Barber who is 5”5.

De La Rosa will also have a significant 3-inch reach advantage over this fight.

This is an exciting matchup in the UFC flyweight division between two up-and-coming prospects. Both of these fighters are still very young and have huge futures ahead of them.

Maycee Barber’s dominant grappling game will be tested by De La Rosa’s submission threat. This fight could end up being a brawl on the feet.

Both women are on the cusp of breaking into the top 10 rankings of the UFC flyweight division. This fight will have massive implications for the futures of both fighters’ careers, determining who deserves the hype behind them.

The oddsmakers’ predictions see Maycee Barber as the favorite with opening odds of -185.

Get your Maycee Barber vs Montana De La Rosa picks in. 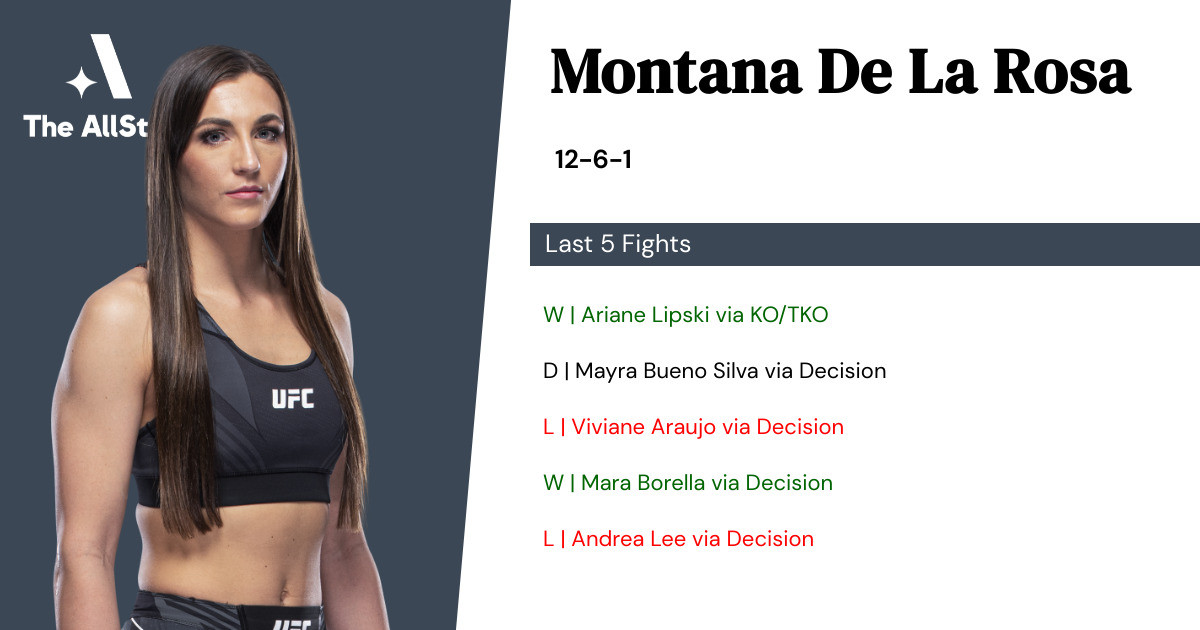 Montana De La Rosa has a 75% finish rate, including 1 by knockout, 9 by submission, 3 by decision. 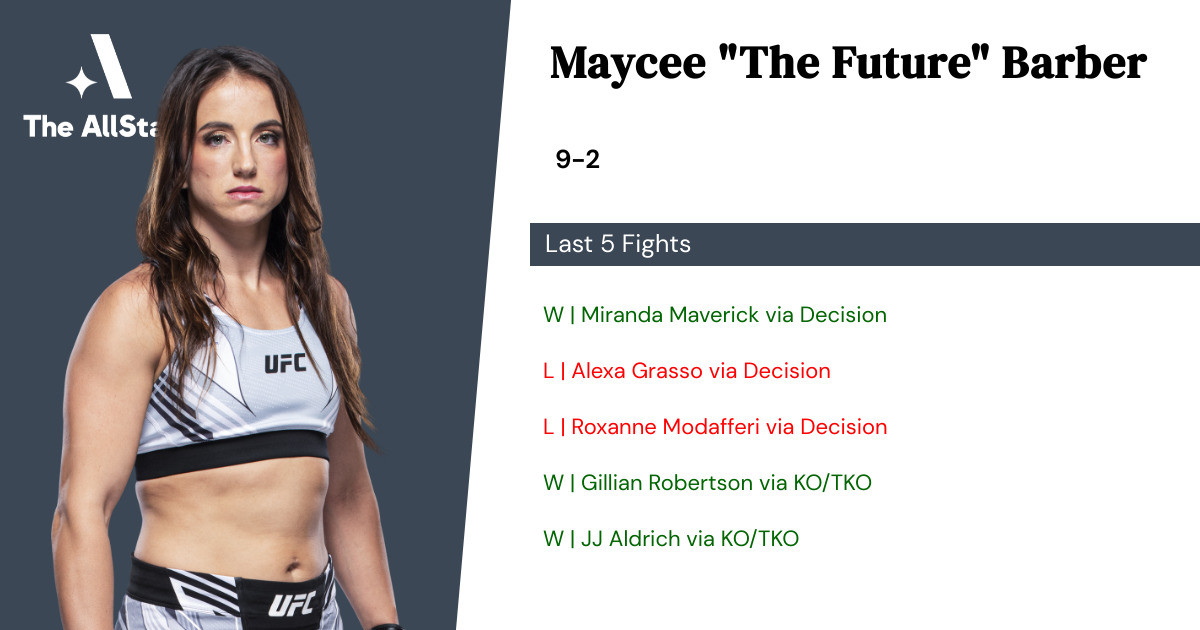 Maycee Barber has a 78% finish rate, including 5 by knockout, 2 by submission, 2 by decision.

Maycee Barber is looking to put together a winning streak, having last beaten Miranda Maverick at UFC Fight Night: Sandhagen vs. Dillashaw.

Maycee Barber vs Montana De La Rosa is set to go down at UFC Fight Night – Lemos vs. Andrade. The fight is expected to start at around 9:30pm EST on Saturday 23rd April 2022.

ESPN+ is the best option to live stream Maycee Barber vs Montana De La Rosa if you live in the United States. Outside of the USA, the best option is to register for UFC Fight Pass.

Where can I get the best odds for the Maycee Barber vs Montana De La Rosa UFC fight?

Use the AllStar’s directory to find the best sportsbooks and recommendations on where to place UFC bets online. If you just want to play for fun, head over to to our Fantasy UFC picks app to make your fight predictions for Maycee Barber vs Montana De La Rosa totally FREE.