Michael Chandler is on a two-fight losing streak after consecutive defeats to Charles Oliveira and Justin Gaethje.

Tony Ferguson is on the worst losing streak of his career with three defeats in a row. His last UFC appearance ended in a unanimous decision defeat to Beneil Dariush.

Michael Chandler opens as the favorite with betting odds of -180.

Tony Ferguson will be the betting underdog with opening odds of +150.

Michael Chandler was involved in a nominee for Fight of the Year against Justin Gaethje in November, losing the back-and-forth war by decision.

Chandler enjoyed a showstopping start to his UFC career with a first-round knockout over Dan Hooker. However, his shot at the UFC Lightweight title ended in a knockout defeat to current champion Charles Oliveira.

Tony Ferguson has lost three fights in a row beginning with his bruising war with Justin Gaethje at UFC 249, a defeat that snapped a 12-fight win streak.

“El Cucuy” has since dropped unanimous decisions to Charles Oliveira and Beneil Dariush, with both opponents comprehensively outwrestling him.

Tony Ferguson is the taller fighter at 5”11, while Chandler is 5”8. Ferguson will also have a significant 5-inch reach advantage in this matchup.

This is an electrifying matchup in the UFC Lightweight division between two fan favorites and could also have significant title implications.

Michael Chandler has been involved in some incredible fights during his brief time in the UFC, while Tony Ferguson will go down as one of the best to ever do it in the Lightweight division.

Both of these fighters are ranked in the Top 10 of the UFC Lightweight division. A victory for either man would put them back in the win column and on track to break into the Top 5.

The oddsmakers’ predictions see Michael Chandler as the favorite in this fight with opening betting odds of -180.

Chandler predicts he will outclass Ferguson in every area of the fight.

“I think Ferguson could catch Chandler with something in a scramble.”

Former UFC Middleweight Champion Michael Bisping made his pick for the fight:

“I want to say Tony, just for the nostalgia. For the 12-fight win streak. But Michael Chandler is so good.”

Get your Michael Chandler vs Tony Ferguson picks in.

Michael Chandler vs Tony Ferguson tale of the tape

Both fighters have a record of 0-2 against the common opposition. 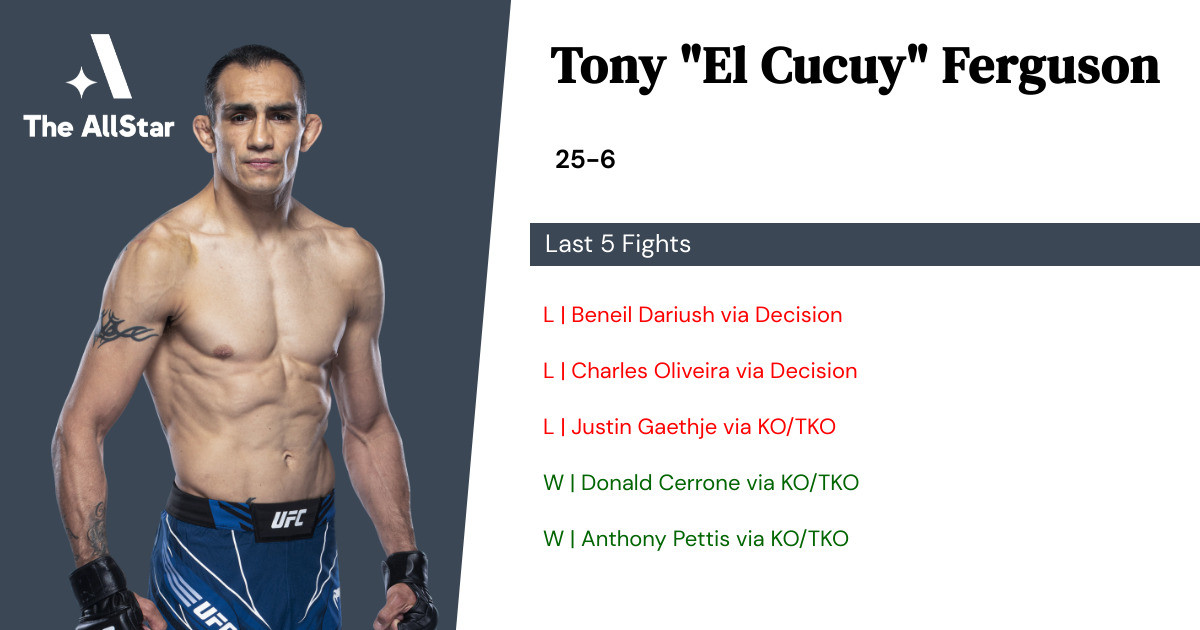 Tony Ferguson has a 80% finish rate, including 14 by knockout, 9 by submission, 5 by decision.

Tony Ferguson is currently on a 3 fight losing skid. 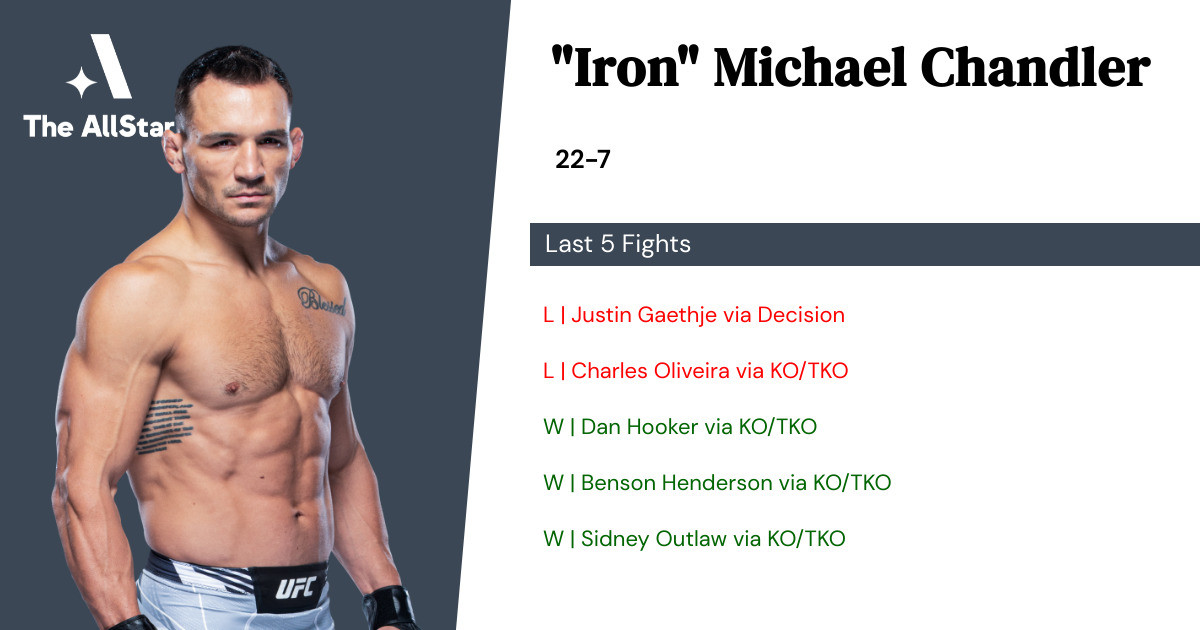 Michael Chandler has a 78% finish rate, including 10 by knockout, 7 by submission, 5 by decision.

Michael Chandler is currently on a 2 fight losing skid.

Michael Chandler vs Tony Ferguson is set to go down at UFC 274 – Oliveira vs. Gaethje. The fight is expected to start at around 10:00pm EST on Saturday 7th May 2022.

ESPN+ is the best option to live stream Michael Chandler vs Tony Ferguson if you live in the United States. Outside of the USA, the best option is to register for UFC Fight Pass.

Where can I get the best odds for the Michael Chandler vs Tony Ferguson UFC fight?

Use the AllStar’s directory to find the best sportsbooks and recommendations on where to place UFC bets online. If you just want to play for fun, head over to to our Fantasy UFC picks app to make your fight predictions for Michael Chandler vs Tony Ferguson totally FREE.