Mike Trizano vs Lucas Almeida is set to go down at UFC Fight Night: Volkov vs. Rozenstruik at 7:30pm EST on Saturday 4th June 2022 in a 145lbs matchup.

Mike Trizano was on the wrong end of a unanimous decision after a bruising battle with Hakeem Dawodu in February.

Lucas Almeida will be making his UFC debut after successfully defending his Lightweight belt in the Brazilian promotion Jungle Fight.

Mike Trizano opened as a -200 betting favorite. Placing a bet on Trizano means you would need to bet $200 in order to win $100.

This fight is expected on the main card at UFC Fight Night: Volkov vs. Rozenstruik.

Lucas Almeida usually fights at Lightweight but will be cutting down to 145lbs for the first time since 2016.

Mike Trizano was comprehensively outstruck in his last UFC appearance against Hakeem Dawodu, losing 30-27 on all three judges’ scorecards.

Foot on the gas! 😤@TheLoneWolfMMA came out swinging in round 3️⃣. #UFCVegas26 pic.twitter.com/Cr7cts4Inw

The Ultimate Fighter Season 27 winner has now lost two of his last three fights. Trizano followed a submission defeat to Grant Dawson in 2019 with a betting upset decision over L’udovit Klein last May.

Lucas Almeida will be given a shot in the UFC despite an unsuccessful showing on Dana White’s Contender Series last year.

The Brazilian suffered his only career loss to date with a unanimous decision defeat to Daniel Zellhuber.

Lucas Almeida has maintained a perfect 100% finishing rate over his career, with nine of his 13 wins coming in the first round. Trizano has a 34% finish rate.

This is an excellent matchup in the UFC Featherweight division. Promotional newcomer Lucas Almeida will face tough opposition in Mike Trizano, who is well-rounded and capable of taking the fight anywhere.

Mike Trizano still has a lot to prove in the UFC given his current streak of two defeats from three. The Ultimate Fighter winner desperately needs a victory here to get back on track.

Lucas Almeida enters this fight as the Jungle Fight Lightweight champion but will be dropping down to Featherweight for his debut.

The oddsmakers’ predictions have Mike Trizano as the betting favorite with opening odds of -200.

Get your Mike Trizano vs Lucas Almeida picks in.

Mike Trizano vs Lucas Almeida tale of the tape 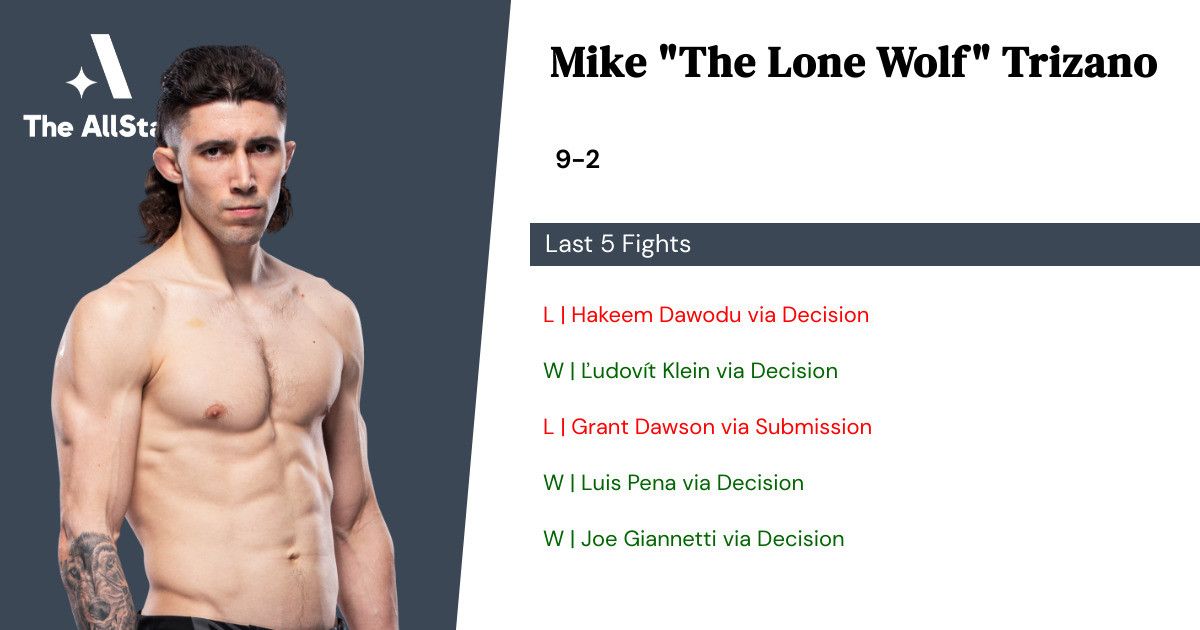 Mike Trizano has a 34% finish rate, including 3 by knockout, 2 by submission, 6 by decision.

Mike Trizano is looking to get back to winning ways after a loss at the hands of Hakeem Dawodu at UFC Fight Night: Hermansson vs. Strickland.

Mike Trizano vs Lucas Almeida is set to go down at UFC Fight Night – Volkov vs. Rozenstruik. The fight is expected to start at around 7:30pm EST on Saturday 4th June 2022.

ESPN+ is the best option to live stream Mike Trizano vs Lucas Almeida if you live in the United States. Outside of the USA, the best option is to register for UFC Fight Pass.

Where can I get the best odds for the Mike Trizano vs Lucas Almeida UFC fight?

Use the AllStar’s directory to find the best sportsbooks and recommendations on where to place UFC bets online. If you just want to play for fun, head over to to our Fantasy UFC picks app to make your fight predictions for Mike Trizano vs Lucas Almeida totally FREE.