Ange Loosa steps into this fight on short notice just two weeks after fighting at XMMA 4.

Ange Loosa is the betting underdog with opening odds of +170.

Mounir Lazzez vs Ange Loosa was first reported on April 12th, just days away from the fight.

Lazzez was booked to fight Elizeu Zaleski dos Santos before his opponent withdrew due to injury.

The Tunisian impressed UFC fans on his debut with an imperious performance against Abdul Razak Alhassan.

Mounir Lazzez will be the taller fighter in this matchup, standing at 6”1 tall. His opponent Ange Loosa is 5”10.

Lazzez will also have a 2 inch reach advantage in this fight.

Ange Loosa is the younger fighter at 28 years old, while Lazzez is 34. However, both men possess similar pro MMA experience.

Mounir Lazzez showed UFC fans what he was all about with a skillful striking display in his UFC debut. He uses his range well and likes to mix up the knees and elbows.

Ange Loosa was involved in a highly entertaining encounter on Dana White’s Contender Series. This fight could be one of the most exciting bouts on the card.

The stakes are big for both men. Ange Loosa is making his UFC debut after an unsuccessful showing on the Contender Series in September.

Mounir Lazzez is looking to bounce back from a disappointing defeat last year and work his way up into the Welterweight rankings.

The oddsmakers’ predictions have Mounir Lazzez as the betting favorite with opening odds of -190.

Get your Mounir Lazzez vs Ange Loosa picks in.

Mounir Lazzez vs Ange Loosa tale of the tape 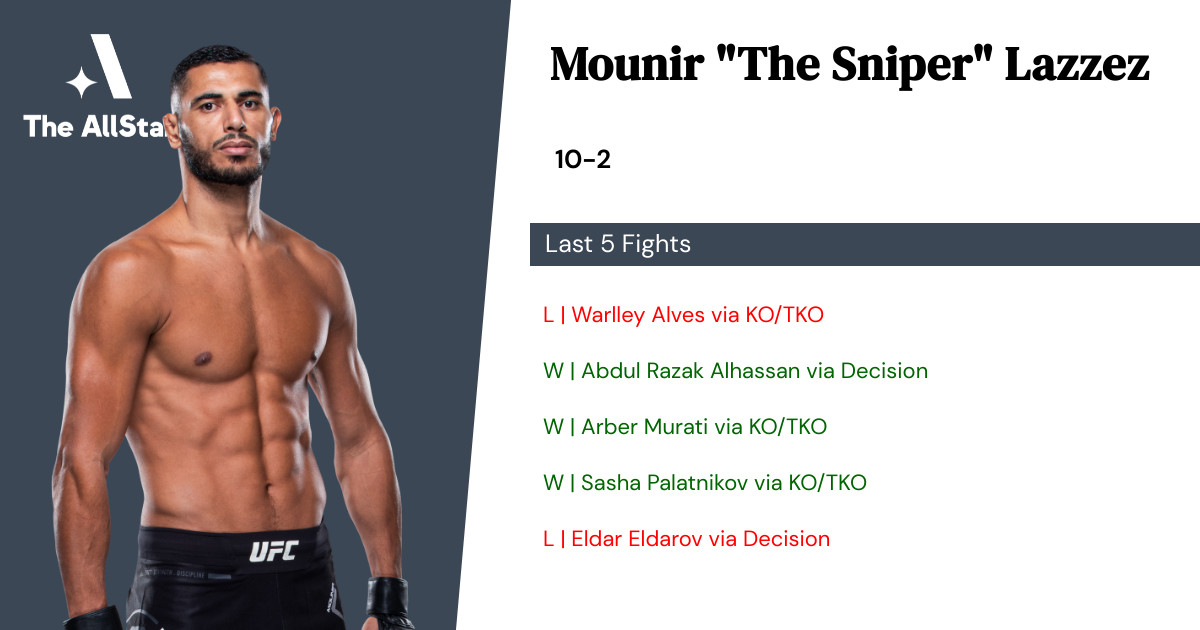 Mounir Lazzez has a 80% finish rate, including 8 by knockout, 2 by decision.

Mounir Lazzez is looking to get back to winning ways after a loss at the hands of Warlley Alves at UFC Fight Night: Chiesa vs. Magny.

ESPN+ is the best option to live stream Mounir Lazzez vs Ange Loosa if you live in the United States. Outside of the USA, the best option is to register for UFC Fight Pass.

Where can I get the best odds for the Mounir Lazzez vs Ange Loosa UFC fight?

Use the AllStar’s directory to find the best sportsbooks and recommendations on where to place UFC bets online. If you just want to play for fun, head over to to our Fantasy UFC picks app to make your fight predictions for Mounir Lazzez vs Ange Loosa totally FREE.